Jeff Garlin begs to differ. The Emmy-nominated producer, comedian and star of ABC’s The Goldbergs — who has been a jazz aficionado for 35 years and says the music even influences his improvisational stand-up style — insists L.A. is on the verge of a major jazz rebirth. “Hell yes,” says Garlin, “L.A. is turning into a hip place for jazz with a lot of great young players.”

The comedian is hardly the only A-lister happy to use his name (and checkbook) to keep the scene growing — others include such hardcore jazz buffs as Billy Crystal, Bill Maher, Kevin Spacey, Tommy Chong, Molly Ringwald and Louis C.K. “Bill Maher has turned me on to more than one Sinatra song that I wasn’t aware of,” says Family Guy creator Seth MacFarlane, who also is a standards singer whose No One Ever Tells You landed at No. 1 on the Billboard Jazz Albums chart last year. In June, many of MacFarlane’s fellow jazz fans, including Clint Eastwood and Morgan Freeman, gathered at the estate of Quincy Jones to raise funds for The Jazz Bakery, a storied club that lost its lease in 2009. Its new home, opening soon in Culver City, finally will give Los Angeles a world-class jazz hub, with two state-of-the-art stages and an interactive museum. Architect Frank Gehry donated the plans, and music impresario Herb Alpert cut a big check. 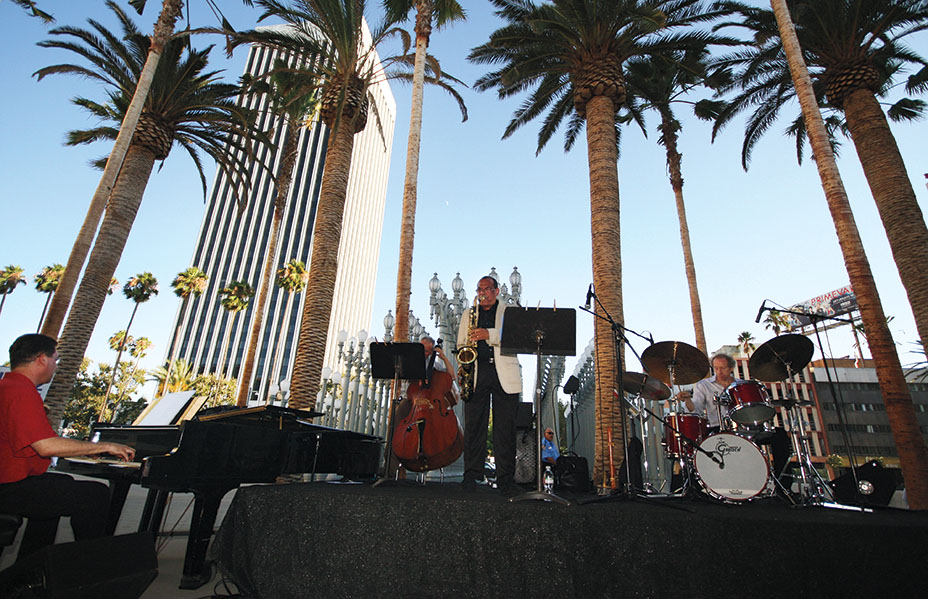 Not since Swingers — the ‘90s cult comedy that launched the careers of Vince Vaughn and Jon Favreau, plus a resurgence of fedoras, chain-wallets and, yes, big band — have so many in Hollywood been so high on the local jazz culture. “In New York, you get a lot of musical diversification, and I think that’s why it has this reputation [as the jazz epicenter],” says MacFarlane. “L.A. has a little bit of a ways to go, but the spots that exist here are as good as anything I’ve seen in New York.”

The L.A. scene may not be huge, but its devotees are committed, active and share a deep history. Take Eastwood and Jones. The two met in Seattle in the early ‘50s, when both were teenagers. “Quincy was a trumpet player with the Seattle University band and a man about town, and I was a young guy just hanging out,” recalls Eastwood. The pair bonded over a love of players including Dizzy Gillespie, Charlie Parker and Lester Young.

If the local scene has a grand dame, it’s Ruth Price, the Jazz Bakery’s founder and president. “I know almost every jazz musician who is alive or was alive,” she says. Price’s gift is for spotting local talent, such as Kamasi Washington, a 34-year-old tenor saxophonist from Inglewood who has played with Kendrick Lamar and Snoop Dogg as well as at ICM’s recent bash celebrating its swanky new digs. Washington counts Don Cheadle, Ava DuVernay and Malcolm-Jamal Warner — himself a bassist in his own jazz-funk band called Miles Long — as ardent fans. Says Washington: “L.A. has the attention of not just the jazz world, but the music world.”

23 L.A. Hotspots for Your Quarterlife-Crisis Birthday (and Then Some)

The town’s renewed interest in jazz also is evident in a recent spate of biopics about the genre’s iconic practitioners. The past year or so has seen films about Miles Davis (Miles Ahead, directed by and starring Cheadle), Nina Simone (Nina, starring Zoe Saldana) and Chet Baker (Born to Be Blue, starring Ethan Hawke). Meanwhile, Denzel Washington lent his voice to a new Coltrane doc, Chasing Trane, which premiered at Telluride.

As these aficionados help usher in L.A.’s next jazz era, many have been reminiscing about its rich past, from early- to mid-1900s Central Avenue. (Wynton Marsalis likened it to New York’s famous jazz corridor, 52nd Street) to L.A.’s role in the “West Coast cool jazz” movement of the ‘50s, with musicians such as Dave Brubeck and Stan Getz. Hermosa Beach’s Lighthouse Cafe, one of the few clubs from that era still operating, fittingly plays a major role in La La Land.

One thing L.A. currently lacks is a dark hole-in-the-wall with the vibe of New York’s 80-year-old Village Vanguard, the most famous jazz spot in the world. “There’s not a cool dive in the heart of Hollywood,” says Garlin, who would like to change that. “I’d love to open my own place that’s got 75 seats for jazz.” In the meantime, there are plenty of places to get your jazz fix right now. 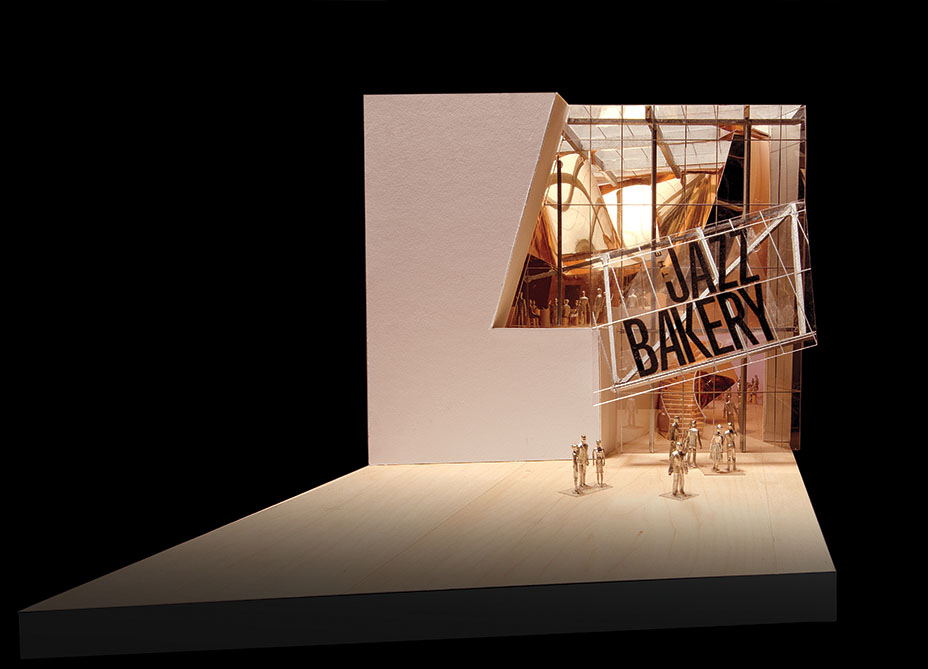 This combination art gallery, performance space and cocktail bar in Little Tokyo — a hot spot for under-40 fans of avant-garde jazz — is La La Land director Chazelle’s go-to. “It’s next to a ramen shop and so cool, not stuffy at all,” he says. Adds Tierney Sutton, a Grammy-nominated jazz singer who worked with Eastwood on the music for Sully, “There’s a young lions scene here that’s very vital.”

Ever since Dizzy Gillespie played this joint shortly after it opened in 1986 (at its former location on Cahuenga Boulevard), Catalina has been the place to see national touring acts, such as Eastwood’s favorite, the Monty Alexander Trio. This August, Joni Mitchell — in her first public appearance since her 2015 brain aneurysm — showed up with Herbie Hancock to hear keyboardist Chick Corea.

While no one in L.A. can rival Woody Allen’s 25-year tenure playing clarinet at New York’s Carlyle Hotel, the town has Jeff Goldblum playing piano and fronting his own Mildred Snitzer Orchestra here on Wednesday nights. 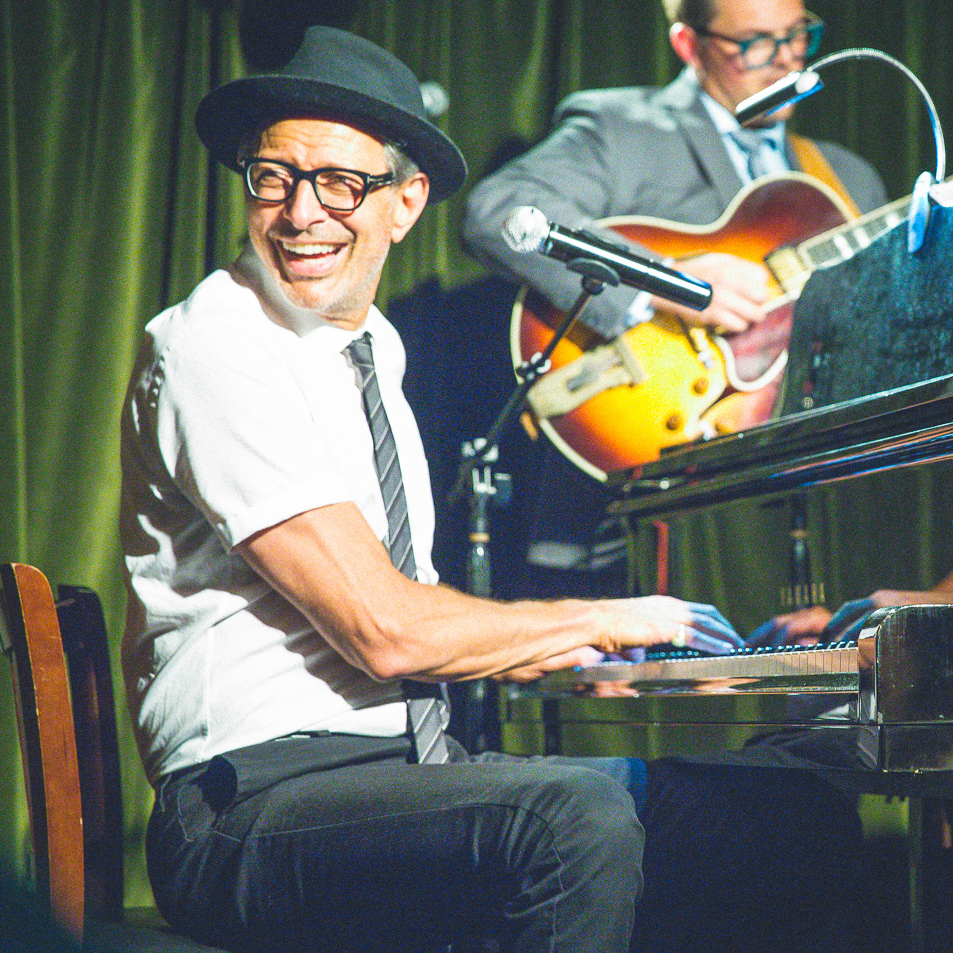 “I’ve been to jazz clubs all over the country, and Vibrato ranks with the best of them,” says MacFarlane, a regular performer at this wood-burnished Bel Air supper club owned by Alpert. “The acoustics are fantastic; the vibe is great.”

His recommendation when he’s not on stage? “Any time Chuck Berghofer is there, you know it’s going to be a good show.” (Barney Miller fans: That’s Berghofer playing the theme’s opening bass line.)

It’s not just the clubs that bring in the celebrities: Jamie Foxx, Anthony Anderson and Arsenio Hall were spotted at the 38th annual Playboy Jazz Festival at the Hollywood Bowl in June (an event that long was synonymous with Bill Cosby, who hosted it 31 times before stepping down in 2012). November’s Thelonious Monk Jazz Institute’s annual vocal competition at the Dolby Theater draws such fans as Goldie Hawn and MacFarlane. 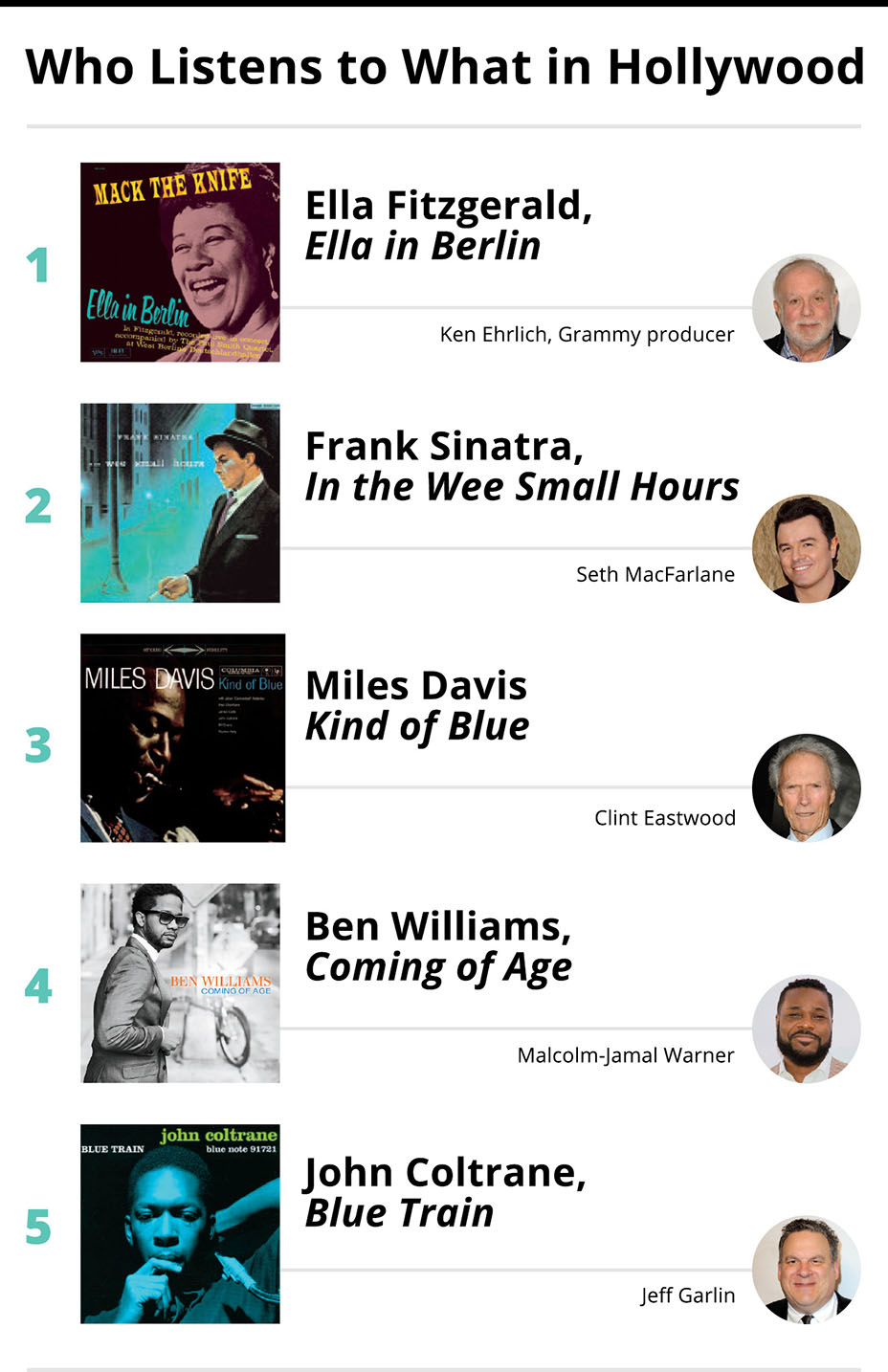 The singer’s 1960 live album, featuring one of the great scat solos of all time on “How High the Moon,” was inducted into the Grammy Hall of Fame. “Ella,” says the fan who chose this. “Don’t make me try and explain that. It just goes deep.”

“It might be the best album ever made,” says the Sinatra obsessive who chose this 1955 masterpiece by Ol‘ Blue Eyes. “Sinatra deserves to be up there with Mozart as the musician of his century.”

For many, including the fanatic listed here, this moody, iconic 1959 album was both their entree to the genre and still a go-to staple. “With John Coltrane and Miles, and Cannonball [Adderly] and Bill Evans, it’s still one of the greatest jazz albums ever.”

“I’m a huge fan of Ben Williams,” says our ardent supporter of this 31-year-old D.C.-born bassist. “He comes to L.A. and plays at the Bluewhale. I’m playing this album so much right now.”

This 1958 masterpiece by arguably the greatest sax player of all time is accessible enough to be a perfect “gateway album.” Says our fan, who also uses YouTube to watch classic gigs, “I own a lot of his old performances on DVD.”