For the first time in years, Daveed Diggs feels like he knows what he’s doing.

The multihyphenate rapper-writer-actor catapulted into the national consciousness with his Tony Award-winning performance, playing the dual role of Marquis de Lafayette and Thomas Jefferson in Hamilton. That recognition took him to Hollywood, where he has appeared on TV shows like Black-ish and The Unbreakable Kimmy Schmidt, co-written and starred in the film Blindspotting, and acted in Netflix’s Velvet Buzzsaw. He’ll also star in the TV series Snowpiercer, which is set to premiere on TNT later this year.

Now, he’s finally back onstage doing his first play since he cut his teeth at Bay Area stages back where he grew up in Oakland, Calif. He’s starring in Suzan-Lori Parks’ provocative race drama White Noise, running off-Broadway through May 5.

“It’s the first time I’ve felt like I know what I’m doing in five years, other than when I’m in the studio,” Diggs told The Hollywood Reporter, referencing his work with the Los Angeles experimental hip-hop group Clipping. “I’m still making it up as I go along in all the rest of it, and trying to put things together and learn from other people, which is great. But it is also nice to come back home and do something where at least the way to work on it feels very comfortable. This is the thing I’ve been doing my whole life.”

The play also represents a homecoming to The Public Theater, where Hamilton premiered off-Broadway in early 2015, becoming an overnight cultural phenomenon. Diggs has been talking in the intervening years with Public artistic director Oskar Eustis, who directed White Noise, trying to find the right project. When the script by Parks, a Pulitzer Prize winner for 2001’s Topdog/Underdog, came into his in-box while he was in his Snowpiercer trailer, he knew this was it.

“Suzan-Lori Parks has been my favorite playwright since I was a teenager,” said Diggs. “I was very excited to just have the opportunity to read an unpublished Suzan-Lori Parks script. I read it and by the time I finished it, I was pacing back and forth in my trailer yelling at the phone that I was reading on. I couldn’t believe what I was reading.” 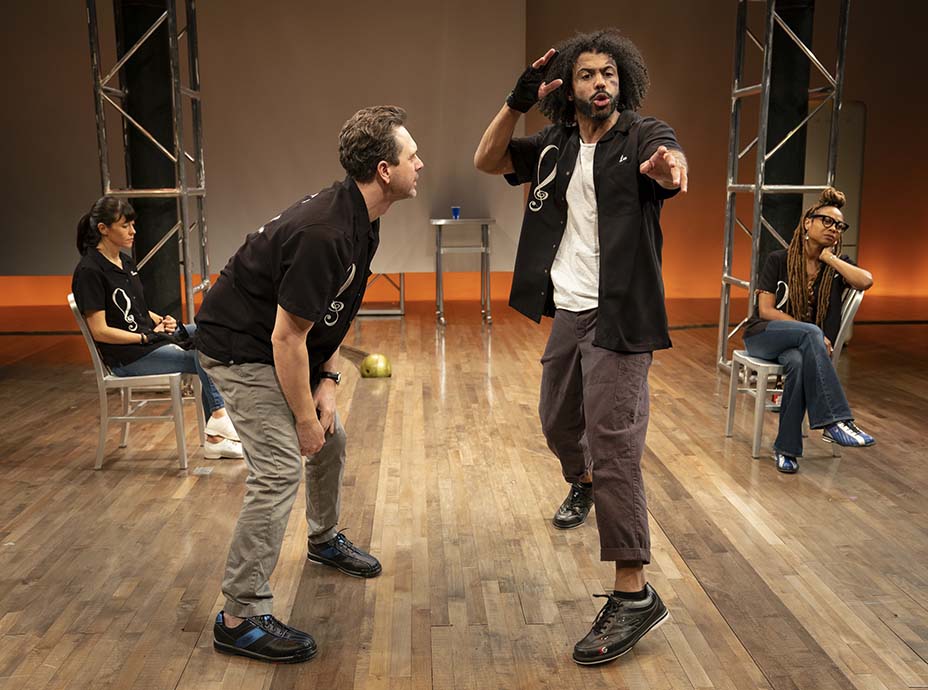 Diggs plays Leo, a painter with a penchant for bowling and a problem with insomnia. One night, he’s assaulted by police while out walking in the neighborhood. Instead of suing, as his lawyer girlfriend (Zoe Winters) urges him to do, he comes up with an unorthodox experiment. Leo persuades his wealthy white friend Ralph (Thomas Sadoski) to purchase him as a slave for 40 days, thus removing the burden of self-responsibility while securing payment to cover his debts.

The actor goes Off Script with The Hollywood Reporter to discuss being back onstage, the plausibility of Parks’ scenario in modern society and what it has to say about larger cultural issues right now.

Can you describe the process of working on this production?

We did so much talking about the show and what, at the end of the day, feels like very little staging. Because every time we would try to stage something, we would just run into more questions. It’s dealing with such foundational ideas, and the ways these characters are deciding to participate in this experiment are so huge that you really have to ground all of their discussions. So we did so much just investigating the honesty of the situation. It was a super deep dive and an intellectual and deeply emotional process.

Your character is racially profiled by the police, and you’ve spoken openly in the past about your own experience with the police. Did you bring that to this character?

The way I look at acting is that you have to bring all your experience that you’ve ever had up to the point where you start working on a part. Anything in my life I can use to parallel that experience I used a lot. The things that don’t parallel, I try to supplement with other things, like bowling lessons or trying to go to museums and look at more paintings because Leo is a painter and I am for sure not a painter. The times I’ve found myself in a situation where I felt really unsafe with the police, that is something I have experienced, so I can use that here.

Your character takes on the role of a slave in the play. Do you think this is a scenario that could really happen today?

In terms of almost everything that happens, I don’t know how much fantasy there is in the play. Every character is super grounded in a reality that seems really palpable and very plausible. How many boardrooms does “white club” sound like? How many rotating poker clubs are there are in the city that are, just by virtue of who is allowed to participate in them, essentially the same thing that we would imagine that to be? In terms of Leo’s quest, I can see ways in which accepting a role for myself that negates things like my education or some of my free will — were I to make those things less important to me I may not have had the same run-ins with the police that I’ve had. I don’t think Leo’s quest is that crazy. He learns things throughout it that he didn’t know before, and I think maybe none of us knew before or certainly none of us were willing to investigate. The idea that if I were a slave, I would be safer than I would be not being a slave is not that crazy to me. Because what you exchange for freedom is safety in a lot of ways. 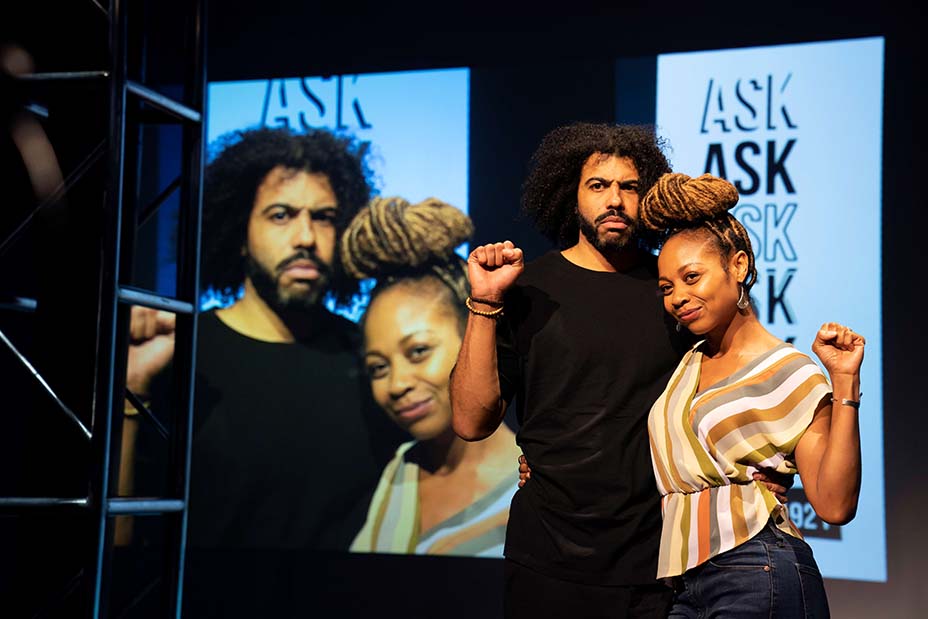 We’re seeing many narratives onstage tackling issues of privilege and race, with Jeremy O. Harris’ Slave Play, Jackie Sibblies Drury’s Fairview and now, White Noise. How do you hope these plays are shaping the larger conversation happening in this country?

The divisions and the hate that exist in this country are being felt by everybody very palpably, maybe more so than they have in a while. For a lot of artists that has to do with the fact that there are things we’ve never actually looked at. We sort of fall back under the generalization that slavery is bad or that it’s not something I would ever participate in. Or that racism is bad without ever trying to understand what racism is or where it comes from. We didn’t have a choice; we were all born into it. We didn’t choose to be a part of it. But we do participate in it. If we don’t honestly look at that, I don’t know how we ever get past it.

A big part of this play is Leo coming to grips with a lot of anger and a whole lot of rage that he’s feeling. He’s never been an angry person, and that’s a thing that I, Daveed, relate to very well. I’m an incredibly happy person, and I smile a lot and I get angry very rarely. I almost never experience actual rage. But the past few years, I’ve been angrier than I’ve ever been, and there’s something to examine there.

The play is over three hours long and very intense. How do you prepare before a show and unwind after?

These days I’m recording another Clipping album, so we’re in the studio all day. I just try to eat something after and have a good conversation with somebody. I have a little steamer in my room. I do a lot of steaming. My voice is my main concern these days. It’s being worn pretty thin. Lots of coconut water. Trying to stay hydrated has proven to be very important.

Do you like working on multiple projects at once?

It’s good to work on something else and always have your mind tested in other ways. All of the work I’m doing in the play is bleeding into the recordings, and everything I work on during the day is bleeding into this show. Art always begets art, and so I don’t think it’s ever bad to be working on a couple of things at once if you can manage to do that and still stay sane and functional.

Do you have any other film and TV projects coming up?

There’s a few new films that I’m writing with Rafael [Casal, who co-wrote Blindspotting]. We have a couple of things that we should finish writing this summer. Hopefully we’ll get to make them relatively soon.

— Daveed Diggs is appearing in White Noise at The Public Theater in New York through May 5.