There are plenty of stances to take, both critical and favorable, about the young people in the 1960s and ’70s who dedicated themselves to social change. But whether they were violent or peaceable, there’s little doubting their deeply held views and commitment. So it seems strange that Steven Levenson (Dear Evan Hansen, If I Forget) would choose to have the characters in his new play about that protest era behave as if they were starring in a second-rate sitcom. Although presumably attempting to explore the counterculture and its effects on society, Days of Rage, world-premiering at Second Stage Theatre, mainly trivializes its provocative subject matter.

Set in the fall of 1969, the play depicts the efforts of a trio of young activists to recruit attendees to the titular three-day antiwar protest planned for Chicago by the Students for a Democratic Society. The “collective,” consisting of Spence (Mike Faist, from the original Dear Evan Hansen cast), Jenny (Lauren Patten) and Quinn (Odessa Young, Assassination Nation), occupies a rundown house in upstate New York, its shabby environs decorated with revolutionary signs and a Viet Cong flag (the two-level set designed by Louisa Thompson is terrific).

Decisions affecting the group are made strictly by voting and, since they disdain monogamy, they are free to sleep with one another at will. Spence is currently hooking up with Quinn, although he has a romantic past with Jenny, whom he now considers his best friend.

The group’s harmony is disturbed by two strangers who enter their lives. Spence runs into the waifish Peggy (Tavi Gevinson, This Is Our Youth, making the most of her daffy character), an old friend of Quinn’s who has run away from her parents in Seattle. She expresses a fervent desire to join the collective, assuring Spence, “I hate white people.” He demurs at first when she begs to move into the house, but quickly agrees when she tells him she has $2,000 in her bag.

While distributing leaflets, Jenny meets Hal (J. Alphonse Nicholson), a charming African-American Sears employee who takes a strong interest in her, if not necessarily her cause. He has mixed feelings about her protests against the war, since his brother enlisted and is currently serving overseas. Not long after he shows up a few days later and gifts her with a pair of gloves, the two begin a romantic relationship. 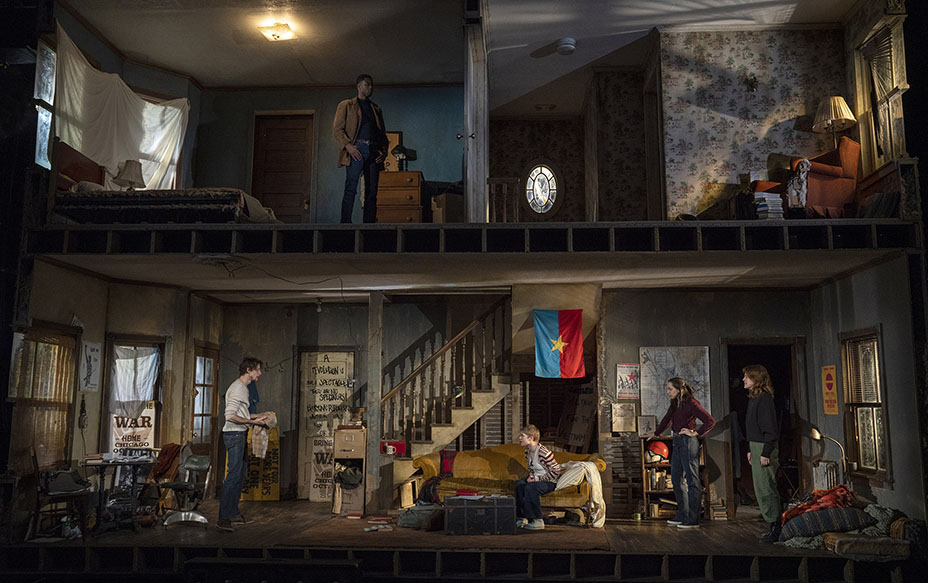 Peggy quickly stirs up tensions among the group, especially when she seduces Spence. He, meanwhile, doesn’t take kindly to the presence of Jenny’s new boyfriend. And when two former members of the collective are killed in a botched bombing, he becomes deeply paranoid that the FBI is closing in.

It’s hard to make out what the playwright is trying to say with this lighthearted work trafficking in serious themes. He seems to be making fun of the characters’ impassioned fervor (except for Hal, who comes off as the voice of reason) and their silly concepts of free love, which become derailed by jealousy. Peggy in particular is depicted as an immature dilettante who spouts revolutionary slogans in an effort to be cool and ingratiate herself with the others even as she carelessly drives them apart.

The slow-starting narrative eventually speeds up to forcedly frantic proportions even as the constant scene changes (inevitably accompanied by blaring rock songs of the period) give the evening a choppy feel.

Levenson, who demonstrated a strong ability to blend comedy and drama in his previously produced plays, flounders with this work written in 2009, never establishing a consistent tone or authorial point of view. The awkward epilogue, handled in a completely different style from what’s preceded it, is particularly stilted. And the snarky tone feels even more jarring in our current Trumpian era in which nationwide demonstrations have been so powerfully inspiring.

It all feels like counterculture-lite, hardly anything to rage about. Trip Cullman’s assured direction makes the piece, flaws and all, occasionally enjoyable, and under his guidance the young performers deliver amusing turns. Days of Rage is reasonably entertaining for much of its 90-minute running time, but it could have been so much more. 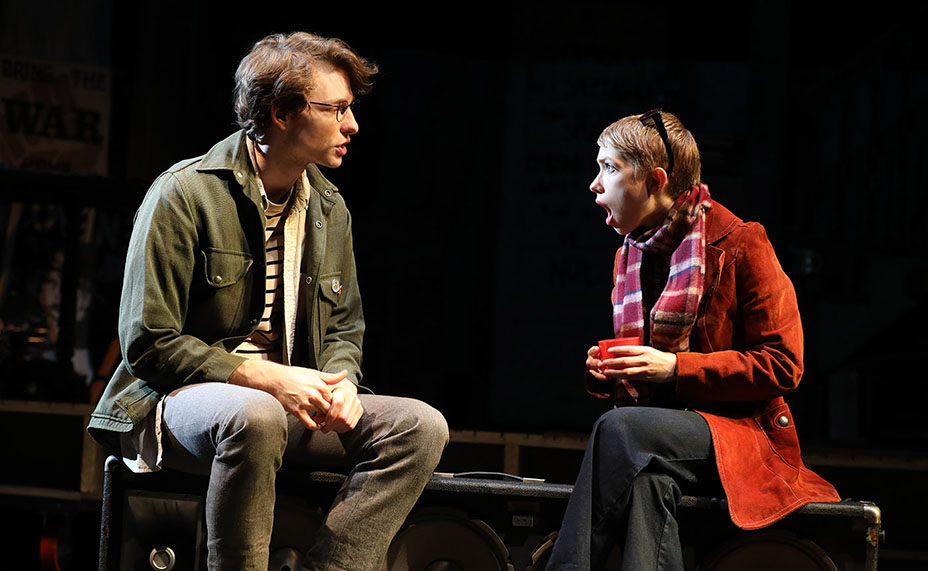