In an effort to widen accessibility for what is expected to be one of the commercial juggernauts of the Broadway spring, Disney will offer $30 tickets via a digital lottery to every performance of Frozen. Director Michael Grandage on Tuesday announced the news at a press event at New York’s Highline Hotel for the new stage musical based on the blockbuster animated feature.

“Back home I run a company where the central ethos is about access,” the Tony-winning British director told The Hollywood Reporter, referring to his London-based Michael Grandage Company. “We put 25 percent of every single house on sale at 10 pounds. When I became a director for hire for Disney, I can’t dictate any of that. That’s what they do. So the idea that they’re doing something similar pleases me personally. Because it means that some people, normally young people or frankly people who can’t afford to go to the theater, get a chance to see something that will hopefully change their lives.”

Frozen begins previews Feb. 22 at the St. James Theatre and is scheduled to open March 22; the New York debut follows a try-out run last summer at the Denver Center for the Performing Arts. Disney Theatrical Group president and producer Thomas Schumacher introduced the event, saying that when he first saw a rough cut of the animated Frozen in summer 2013, he immediately asked when he could start work on the Broadway adaptation.

“It was so Broadway-worthy,” Schumacher said of seeing the film before its official release. “And that’s because of the obvious thing of this extraordinary story of these two sisters who come together and that dynamic, but it really was about this music. Because it was an animated film with an absolutely proper Broadway score.”

While the film had seven-and-a-half songs (“Reindeers Are Better Than People” is the half), the stage musical has almost 20 musical numbers. Songwriters Robert Lopez and Kristen-Anderson Lopez, who won an Oscar for the film’s empowerment anthem “Let It Go,” presented some of their new songs at the event, including “Dangerous to Dream,” which is Elsa’s inner monologue at her coronation, and Anna and Kristoff’s duet when they first meet, “What Do You Know About Love?”

The team will be releasing music videos of those and two other new songs from the show (“Monster” and “True Love”), one at a time each Friday beginning Feb. 23. At the press event, Grandage presented a preview of the latter two videos. “Monster” is Elsa’s second-act anthem, and “True Love” is sung by Anna in Act 2 as she is alone and about to freeze.

“If my heart has a song, it’s this one,” Anderson-Lopez said of “True Love.”

Robert Lopez left after the panel for the first day of orchestra rehearsals, as the cast met with press. Grandage spoke to the weight of opening this show in March, during Women’s History Month, as the cries of the #MeToo and Time’s Up movements have reached a deafening volume. But for Anderson-Lopez, women have been at the center of this project from the start, with her work alongside that of book writer Jennifer Lee, who co-directed and co-wrote the movie.

“I learned the power of two women in the writers room,” said Anderson-Lopez. “Jennifer Lee and I were able to reinforce our own personal experiences in a way that when we’re the only female in the room we never could.” 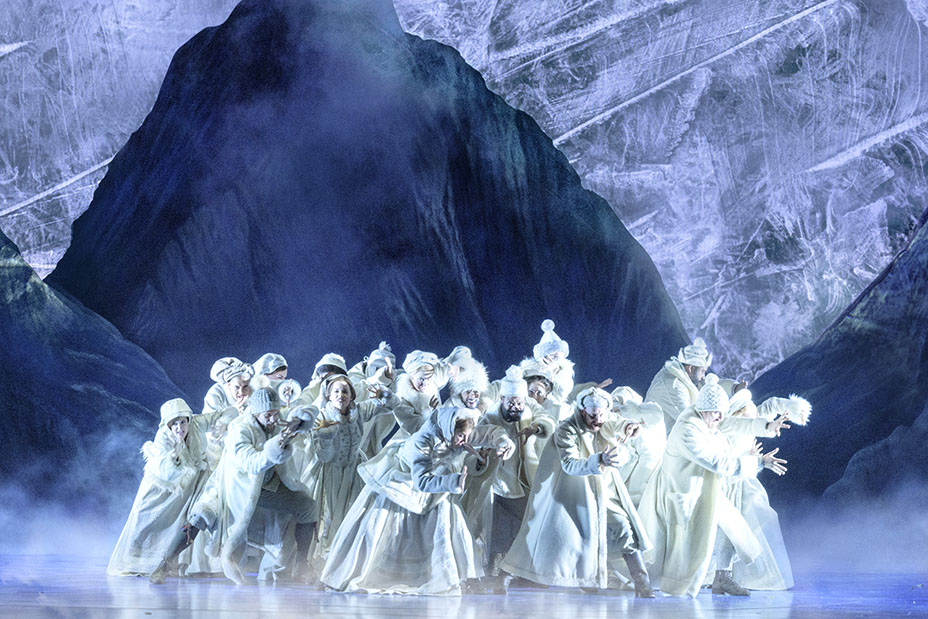