While neither presidential candidate’s name was mentioned explicitly at the Elton John AIDS Foundation’s 15th annual An Enduring Vision benefit, the upcoming election was top of mind throughout the evening.

“Sometimes for the people most affected or for the folks who have been here from the beginning, it can feel like change isn’t happening fast enough, like we should have beaten this epidemic already,” John said, addressing the attendees at New York’s Cipriani Wall Street, where the benefit was held on Wednesday night. “I often feel that way. Then I remember that 35 years ago, being gay meant hiding in the shadows. It meant keeping secrets from your family and friends. For some people, it meant feeling like their life wasn’t worth living.”

Speaking to The Hollywood Reporter on the red carpet before the event, John said one of his most memorable experiences with the organization this year was attending the International AIDS Conference in Durban, South Africa, where 11 years ago, members of the community met in private and wouldn’t take their picture with John for fear of death. This year, they had their first gay pride event after the conference.

Jeffrey Tambor has served as a chairperson for the organization for a year and says that his work on Amazon’s Transparent has opened his eyes to the issues and struggles transgender individuals face, particularly transgender women. “People’s lives are at stake every day,” he said, and when asked on the carpet about the presidential election, he maintained a sense of calm and urgency: “I think we’re going to be fine. But vote. No kidding. Get out and vote. Don’t stay home.” 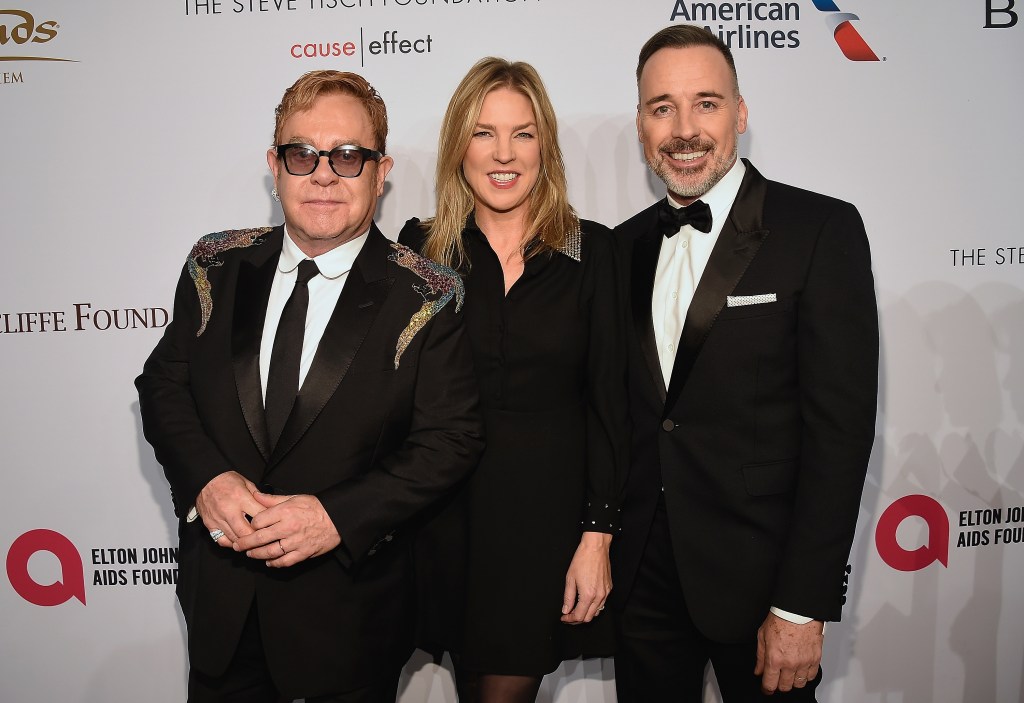 Giustra opened his remarks by inviting the crowd to move to his home country of Canada. “I just want to say because it’s one week away — and I’m sure all my Canadian friends will agree here — we love your country. We hope you get through next week unscathed, but if for some reason it doesn’t work out, you’re all welcome to move to Canada,” he said. Giustra then made a call to action, saying the cause needs to move forward in the private sector as well. “We live in a world where governments and institutions are very thinly stretched,” he said. “I just ask that everybody step out of their little bubble — we all live in a very comfortable little bubble here — and open our compassion and use the great gifts that have been given to make the world a better place.”

Tisch, an acclaimed film producer and the chairman of the NFL’s New York Giants, was the chairman of the board of AIDS Project Los Angeles in the 1980s. “I remember those frightful early years, the reports of a new plague spreading in our cities and our communities, the public hysteria and confusion and above all the pain and suffering of so many young men and women taken from us when they still had so much to give,” he said, emphasizing the importance of this presidential election as government inaction exacerbated the crisis in the ‘80s.

“Less than one week from today America will elect a new president,” said Tisch. “I don’t know what to say about this election anymore. There are no adjectives left in my vocabulary or the English language. But we can’t ever forget that this election matters for the country, of course, and specifically for the effort to beat HIV and AIDS.”

Finally, the organization honored United Nations Secretary-General Ban Ki-moon with the Founder’s Award, for his work supporting the cause around the world. “I grew up long ago in a deeply conservative Korea. There were almost no visible gay and trans people,” he said. “We never discussed sexual orientation and gender identity. I think that’s true for many people of my generation — in Korea and most other countries. So advocacy did not come naturally to me. But when I saw that lives were at stake, I had to speak up.”

The Secretary-General went on to say that 73 countries — almost 40 percent of all U.N. members — treat consensual, same-sex love as a crime, and through his work more than 100 countries have taken the U.N.’s recommendations to protect LGBT rights.

“If my 20-year-old self could see me talking about these issues, he would have been very surprised,” he said. “But I am happy to say I found my voice. And every day, more and more people are finding theirs. A certain brilliant superstar and humanitarian once asked, ‘Can you feel the love tonight?’ Here, now — yes. We feel the love.”