Scottish playwright David Greig’s 1994 drama Europe was written at the time of the Yugoslav Wars. But those conflicts were not the first, nor clearly the last time that the ideal of European unity had been threatened. And it’s quite extraordinary the extent to which line for line, nuance for nuance, the play rings true to the present perfect storm of forced migration, economic hardship and resurgent xenophobia that is ripping the continent’s social fabric apart.

Michael Longhurst’s inaugural production as artistic director of the Donmar could not have been better chosen. It also provides a great showcase for a fine group of young actors (alongside a couple of old hands) and dynamically utilizes the Donmar’s confined but versatile space to suggest a no-man’s land of lost souls, which is about to go up in flames, quite literally.

The principal setting is a dilapidated train station, in a border town in an unnamed country. A few chairs denote a waiting room, over which a small LED destination board opens with a single word in red: Europe.

By everyone’s account, the town is a nondescript place. People travel through, never alight. And in fact these days there’s no chance to get off, since trains no longer stop at the station — a fact that leaves the stationmaster, Fret (Ron Cook), a little perplexed. While he grumbles over indecipherable train schedules and the presence of two strangers camping out in his waiting room, his daughter Adele (Faye Marsay) religiously watches the trains rumble by, imagining more romantic European destinations and dreaming of escape. 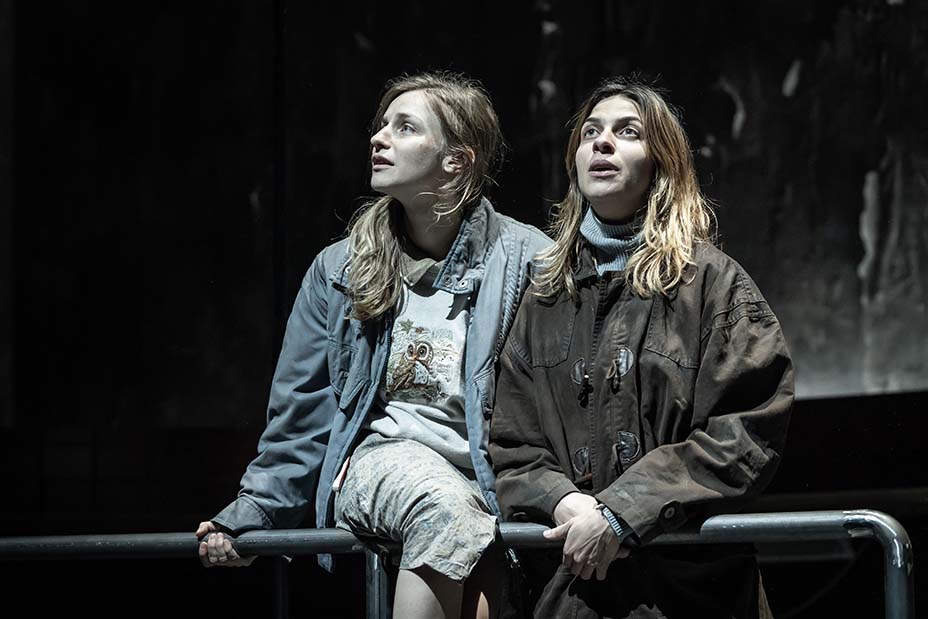 The town is about to experience the familiar confrontation between foreigners — deposited by “the random chaos of current events” — and the local disenfranchised. The newcomers Sava (Kevork Malikyan) and his daughter Katia (Natalia Tena) have fled a war and been driven through the continent, with no destination or plan. Much to Fret’s initial consternation, they make the unused station their temporary home. Meanwhile, Adele’s husband Berlin (Billy Howle) is one of 200 people who have just lost their jobs at the steelworks. And he and his friends want someone to blame.

Berlin suggests they “waste ’em,” but, for the moment, he’s not sure who. “Boat people steal our jobs,” offers the skinhead Horse (Theo Barklem-Biggs). “We’re nowhere near the sea,” argues the more measured Billy (Stephen Wight).

Greig doesn’t present confrontation at first, instead offering the possibility of friendship across the supposed divide: Fret and Sava bond over railways, while Adele embarks on a long defrosting of Katia, who lives in a perpetual state of apprehension and distrust. Unlike her father, Katia is painfully aware that they are “undesirables.” She wants to go unnoticed, invisible, and ideally to stay on the move; Adele is attracted to her sexually, but more because the aloof and educated Katia represents a life, any life, outside the town.

The richness of the play lies in the understanding of shared experience. Almost all the characters are beaten up by the question of whether to leave, or remain. For Sava and Katia, the initial decision to remain in their war-torn country had a painful price, but leaving has left them without a home, stateless. For the local men, the choice is to leave their homes and become economic migrants, or remain with no prospects, their sense of identity and pride eroded.

They’re all victim to another perspective, voiced by the wheeler-dealer Morocco (Shane Zaza), who merely sees the border as a “magic money line” from which he can profit.

There’s the feeling, then, that the outsiders (who today would be from Africa or the Middle East) and the townspeople are in much the same boat. When Adele excitedly plays through the litany of great European cities, it’s as if she’s talking of the past, a Europe that no longer exists. 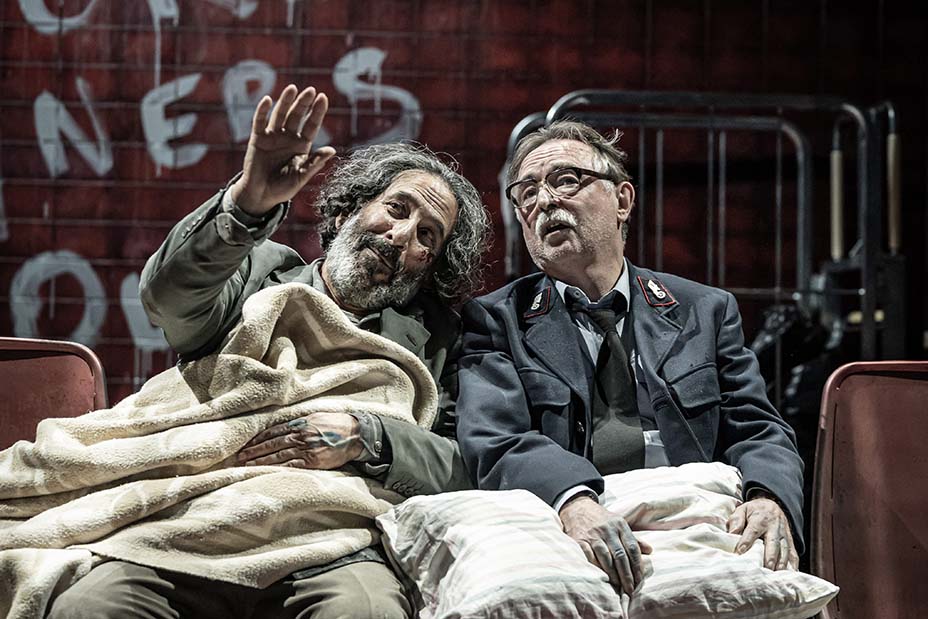 While often amusing in its early stages (courtesy of Cook’s delightful turn as the well-named Fret), the tension escalates along with the boys’ bitterness. And though Longhurst’s direction is a little awkward as he navigates between those developing friendships (this is one of those occasions where it would be far better to let one conversation play out, rather than endless back and forth), it tightens considerably when anger inevitably turns to violence. With Chloe Lamford’s set design revealing some dynamic possibilities, the climax is as viscerally exciting as it is terribly sad.

The ensemble is first-rate. Cook strikes up a touching double-act with Malikyan’s determinedly amiable (but grievously naïve) Sava. Tena subtly portrays a woman whose terrible experience has left her little more than a shell. Marsay is particularly impressive as a woman whose despair at her husband’s lack of imagination manifests itself with startling cruelty, but whose desire for new experience offers a certain optimism.

Howle is beginning to specialize in emasculation, whether the clumsy newlywed of On Chesil Beach or Richard Gere’s tortured son on the BBC drama MotherFatherSon. His Berlin is almost painfully pathetic at times, but his blathering conceals a real danger. Occupying the middle ground between the overtly vicious and bigoted Horse and the decent Billy, Berlin targets the newcomers in town simply because he has no idea what else to do, hence his feeble gesture toward serving and protecting his “community.” Howle has an Everyman quality that makes the character’s final, excited reaction to notoriety quite chilling.