That iconic theme song practically starts playing upon laying eyes on Fabergé’s decadent Game of Thrones dragon egg. But if you were hoping to add the $2.22 million hand-forged creation to your collection, well, that Targaryen ship has sailed.

The luxurious “commemorative egg objet” was sold to an anonymous U.S. buyer in April shortly after its announcement and before the nine months of painstaking work was begun by Fabergé workmaster Paul Jones and his team of artisans, global sales director Josina von dem Bussche-Kessell told The Hollywood Reporter.

The bespoke œuf (or however you say “dragon egg” in Valyrian) was revealed at a private unveiling Dec. 10 in Beverly Hills attended by Emmy- and BAFTA-winning GoT costume designer Michele Clapton, who worked closely with Fabergé head designer Liisa Tallgren and Warner Bros. Consumer Products to dream up the intricate creation inspired by Daenerys Targaryen’s journey from exile in Essos to Khaleesi to Queen of the Seven Kingdoms. And what a sight it was to behold, as seen in the images and making-of video below.

“It’s great to see some of the textures from Daenerys’ dresses, the smocking and the embroidery,” Clapton told THR at the Los Angeles event. “It was so exciting to find this process that we could actually get that and apply it to the egg, and the colors are so beautiful and so subtle. I hadn’t realized how controlled you could be with the colors, and the way this was put together is just beautiful.”

Weighing about 2.3 pounds, the Mother of Dragons-worthy egg is adorned with 2,160 round brilliant-cut white diamonds totaling 28.81 carats, 696 round faceted sapphires in three shades of pink (22.51 carats), 547 round faceted rubies (21.56 carats) and 85 pear- and marquise-shaped Mozambican rubies (18.8 carats), all responsibly sourced by Gemfields — and all fit for the First of Her Name, Breaker of Chains and Queen of the Andals and the First Men.

The shell was molded from sheets of 18-karat white gold, and the egg’s pattern was drawn free-form and then engraved directly onto the material. The sparkling enamel scales were made from crushed light blue, grey, mauve and violet glass that was made into a paste, then layered, fired and re-polished.

An 18-karat white gold dragon tail wraps around the base, which is adorned with white diamonds and moonstones and contains a twisting mechanism of moving joints and linkages that required a “time-consuming” design process.

The objet opens to reveal yet another egg made of three 18-karat gold blades that each represent Drogon, Rhaegal and Viserion. The interior egg’s inner shells are finished with pear and marquise-shaped Mozambican rubies, all surrounded by a pavé of hundreds of pink sapphires and white diamonds.

The “heart” of the egg is a pear-cut Mozambican Gemfields ruby that sits atop a removable white gold crown, which can be removed and attached as a pendant to a necklace chain that’s hidden away within the piece.

In a statement, Jones explains: “The main challenge of a creation like this, aside from the actual making of the piece itself, is the way that all the components should be made and fit in relation to each other — the order that they should be made and assembled to hide what should be hidden, and to maintain the overall aesthetic while achieving the successful function. There is no ‘textbook’ to refer to for this, rather this knowledge is a result of many years of experience gained by working on pieces of this nature, a knowledge that can only be kept alive by projects like this continuing to be commissioned. Long may it prevail!”

The costume designer understands the Fabergé team’s devotion to details that may not be seen with the naked eye.

“I think it’s the same for Game of Thrones — I hand-embroidered [costumes], and people would ask, ‘Why?’ Because I want to know that it’s there, and I don’t really mind if people don’t notice,” explains Clapton. “But then later on at the exhibitions, people could see it. But everything made sense, and there’s a story within every costume. I found a sort of family of people at Fabergé that have the same passion for the craft.”

Russian jeweler and goldsmith Peter Carl Fabergé began the tradition of gem-adorned eggs in 1885 when he was commissioned by Tsar Alexander III to create an Easter egg for his wife. He created 50 Imperial eggs for the royal family through 1916.

In fact, von dem Bussche-Kessel points out that “one of the other Imperial Fabergé eggs of 1908 was called the Pinecone egg, and it bears crazy resemblance to the eggs in the series, but we didn’t want to go that literal.”

Game of Thrones fans will have a chance to see the dragon egg with their own eyes when it embarks on a touring exhibition next year, says von dem Bussche-Kessell. The timing coincides with the Game of Thrones prequel series House of the Dragon, which premieres in 2022 on HBO Max.

The original show is based on George R.R. Martin’s Fire & Blood and focuses on House Targaryen 200 years before the events in Game of Thrones.

Shopping for last-minute gifts for Game of Thrones fans, or just have a few Silver Stags to spare? If you missed out on adding a $2.2 million dragon egg to your own Iron Throne, we’ve rounded up other options that won’t cost loads of Gold Dragon coins. From dragon egg candles and leather-bound books to board games and beyond, check out more of the best GoT merch below. 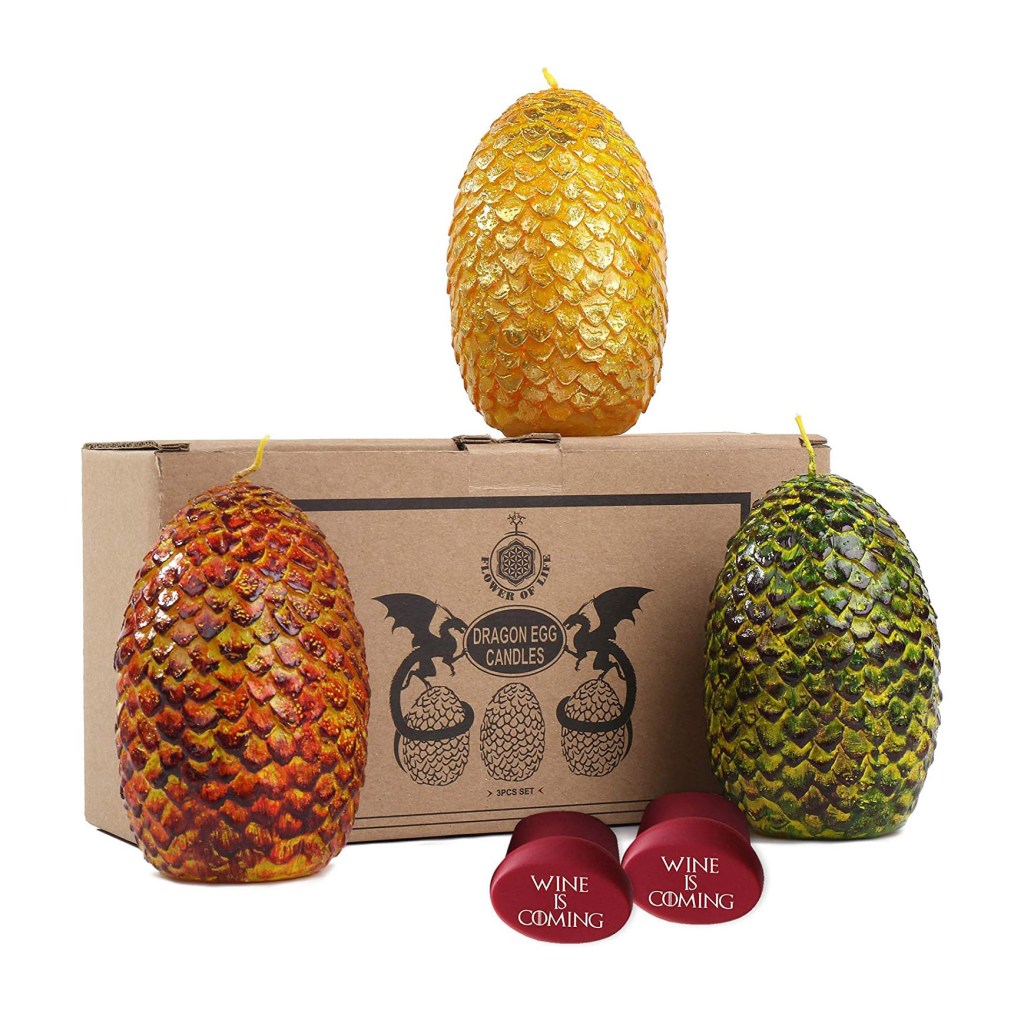 2. Game of Thrones Leather Boxed Set of A Song of Ice & Fire by George R.R. Martin 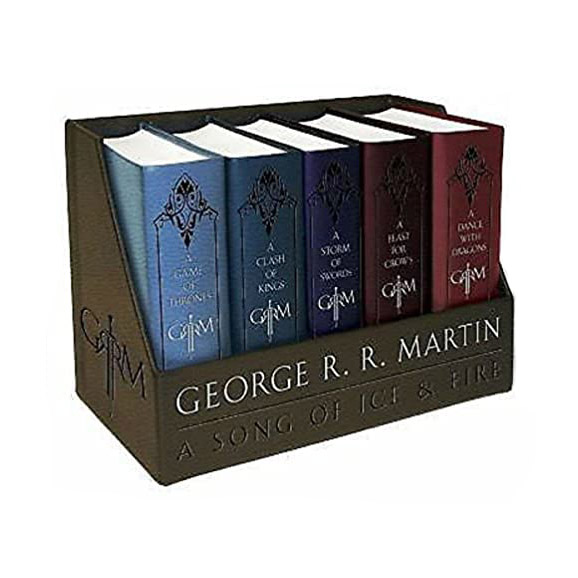 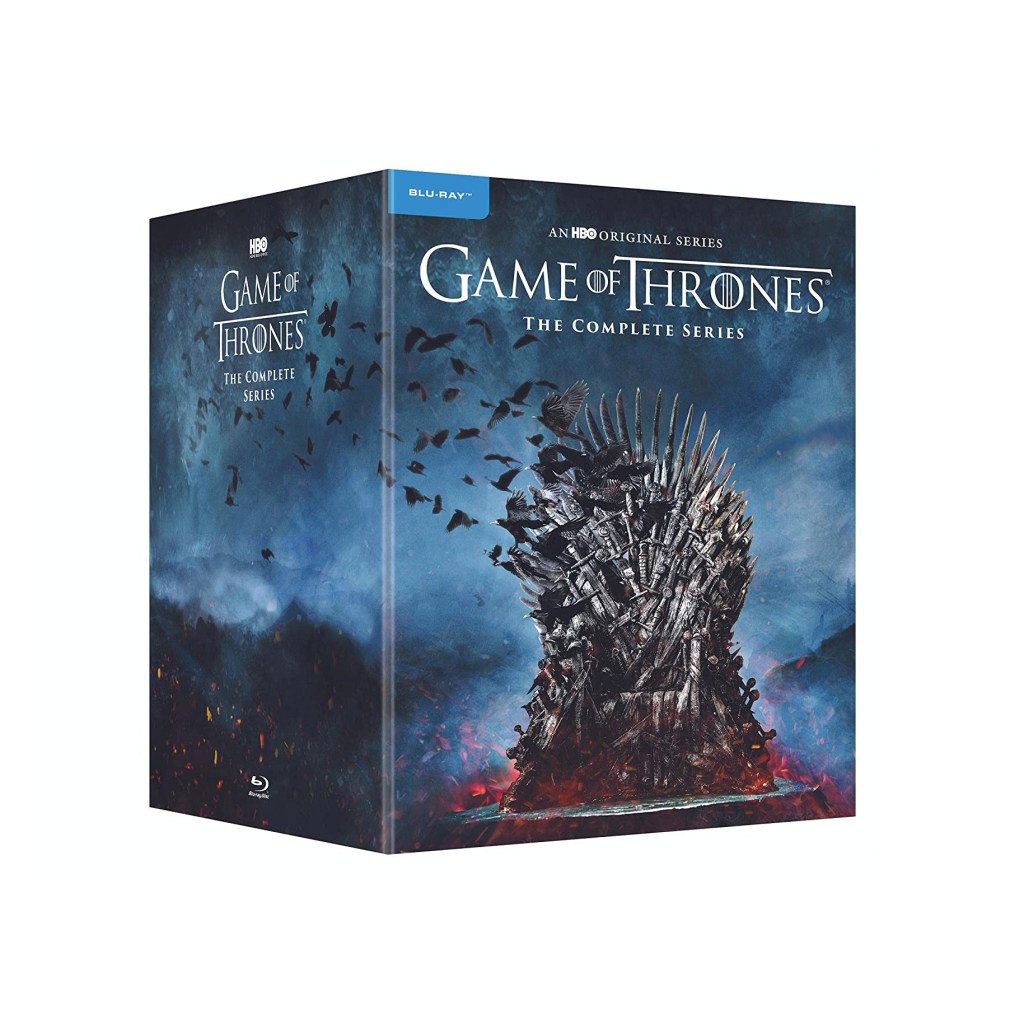 4. Ommegang Game of Thrones: My Watch Has Ended Ale 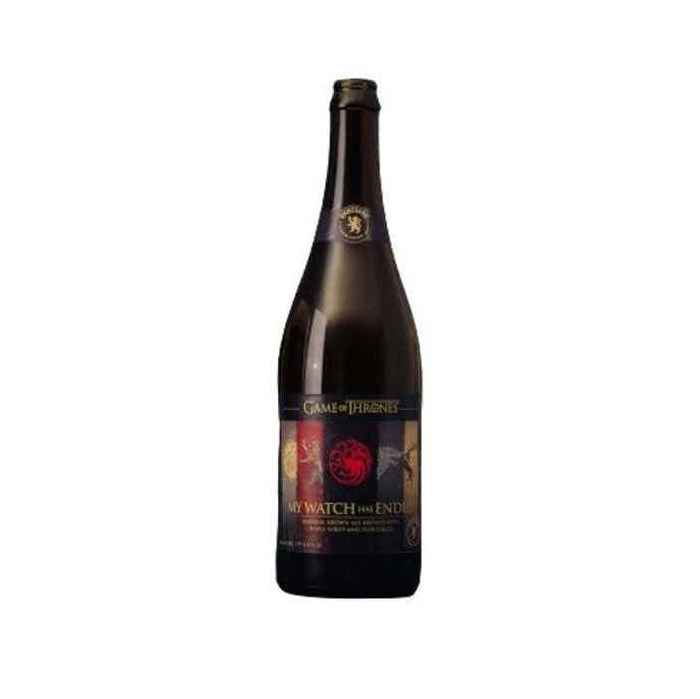 Ommegang Game of Thrones: My Watch Has Ended $14
Buy now 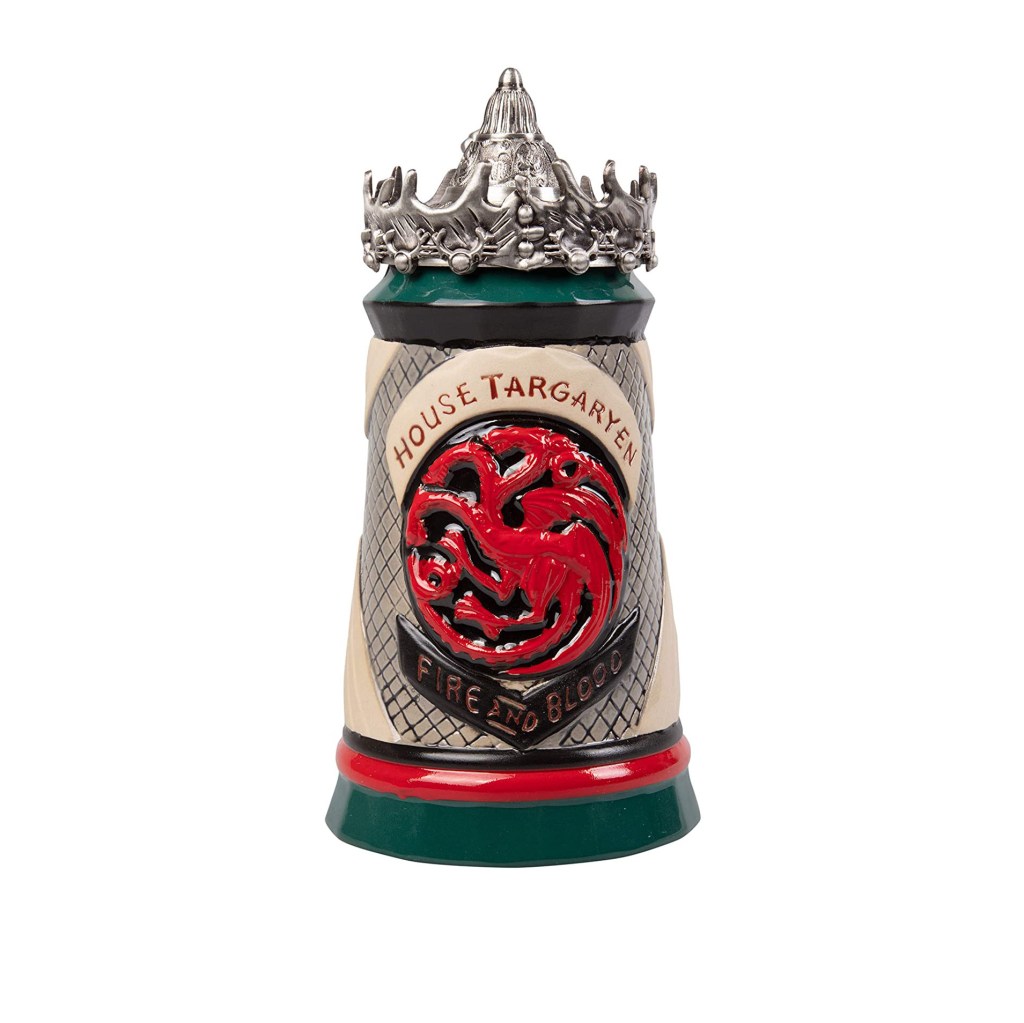 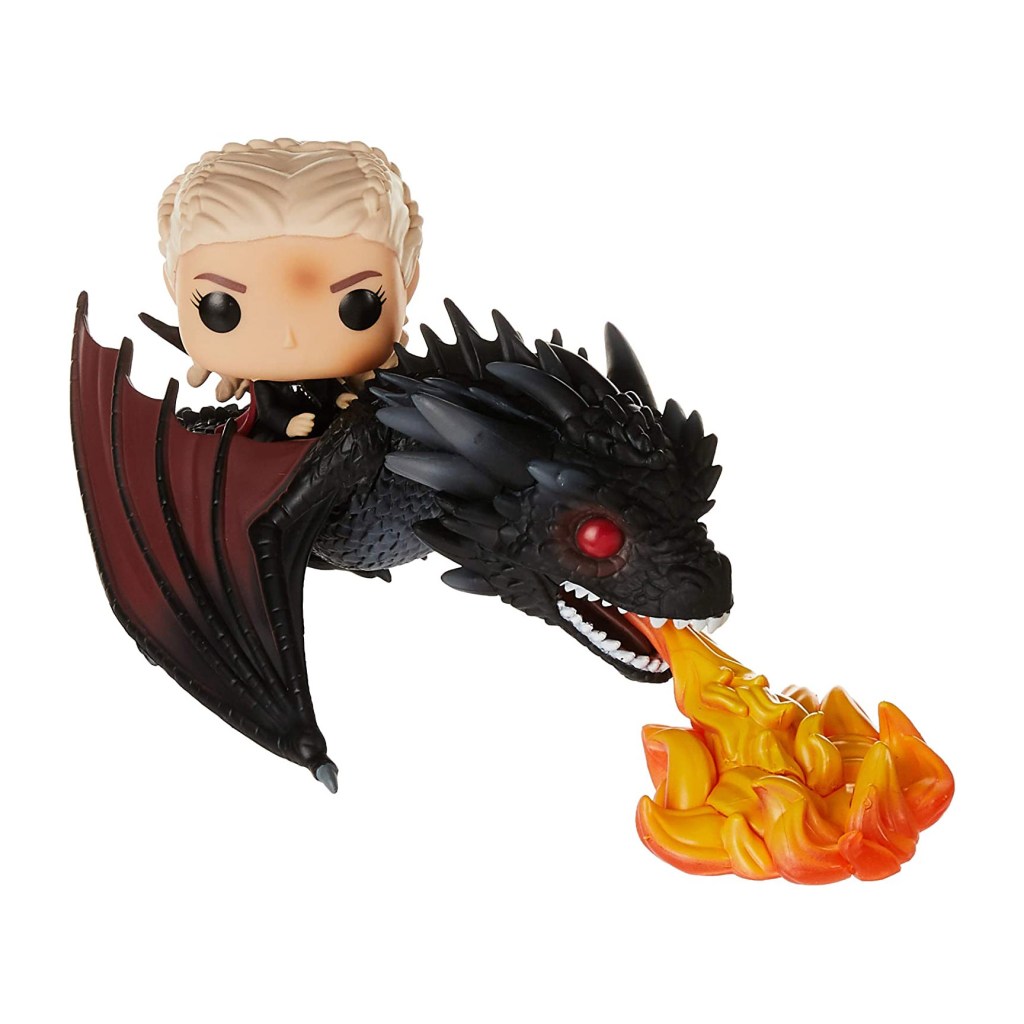 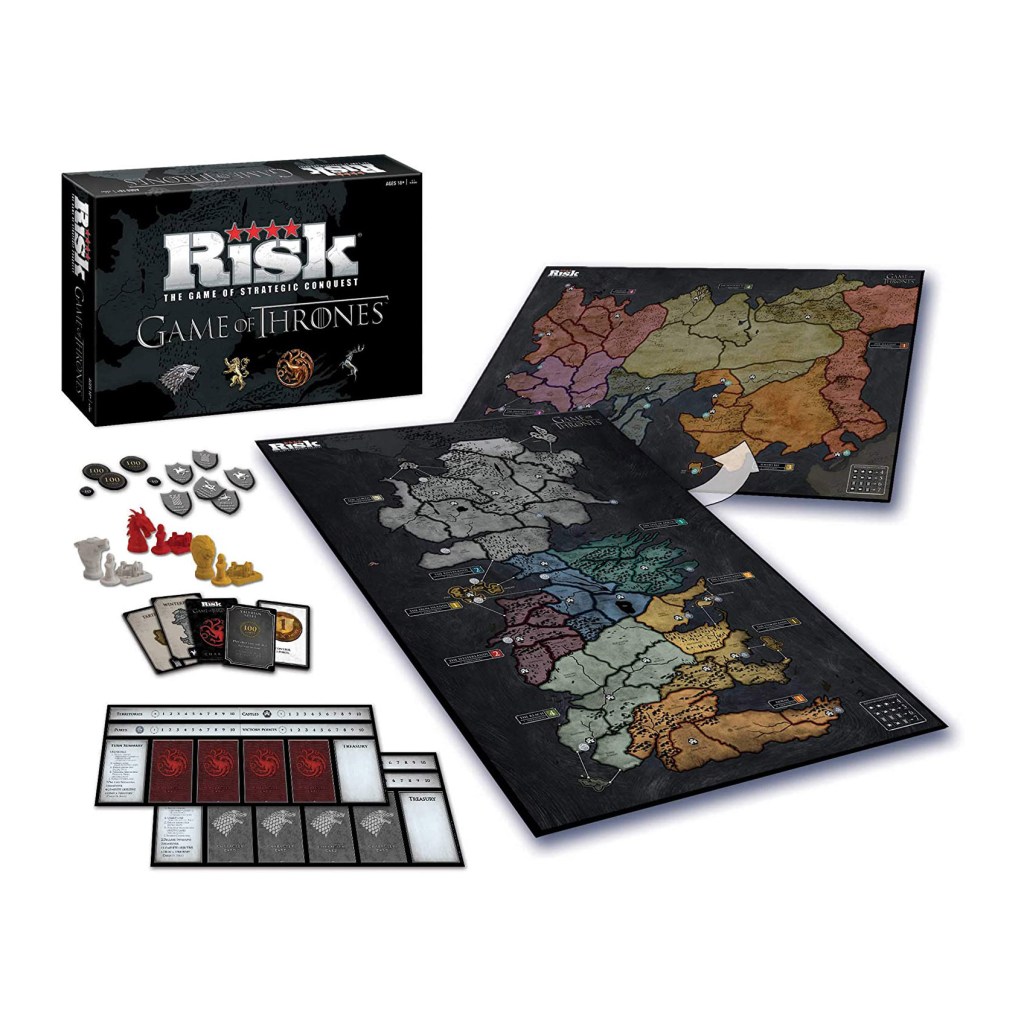