The developer behind the Century Plaza expansion in Century City unveiled new renderings of the $2.5 billion project and announced on Thursday that Fairmont Hotels and resorts will manage the new five-star hotel along with the 63 new hotel residences that are being converted. Once completed, the expansion will also include a public plaza that will feature a giant 23-foot-tall sculpture by the Spanish artist Jaume Plensa that will serve as the plaza’s centerpiece.

The announcement of the new operator and statue was made by developer Michael Rosenfeld and his Next Century Partners, who hosted a glitzy event at the Avenue of the Americas site where the Fox Studios back lot once existed. That event included a light show installation by Obscura Digital, which has performed similar light shows at the Sydney Opera House and the Vatican, and catering for the event was provided by some of L.A.’s most popular restaurants including Mozza Pizzeria, Chinois and Wexlers.

Public plaza and facade of the new Century Plaza

Under heat lamps, guests snacked, drank and chatted as a throw back cover band played old Rat Pack diddies. The party itself was an effort by Rosenfeld to renew interest in the project that was approved in 2013 and is expected to be completed in phases over the next few years. Pre-sales for the condominiums are expected to start in March.

The success of the Century Plaza project will likely hinge on whether Century City can shed its image as a destination solely for lawyers and bankers — here to work — and high schoolers — here to shop.

“Century City was always a great place to work and shop but not a place to live,” Rosenfeld told The Hollywood Reporter. “That has changed organically and it’s been a natural progression that this has evolved into a true mixed use environment.”

And though construction on the project began in March of last year, the newly released renderings give new insight and context to how the two 46-story residential towers set to rise behind the hotel will be integrated into the overall plan. Those two mixed used towers were the compromise reached between the developer and local preservationists, including the Los Angeles Conservancy, who were upset and ready to go to the mat over the original plan, which called for the concave Century Plaza — built in 1966 and considered by some to be mid-century masterpiece — to be razed. The two sides ultimately came to a compromise in 2010 with a new plan that will maintain the original structure but with top-to-bottom interior renovations.

A rendering of a penthouse condominium in one of the two new towers.

The renderings also give new detail to the public plaza that will connect the hotel’s newly created open-air lobby to Avenue of the Americas. Bookending the Plensa statue that anchors the plaza are two low-slung pavilions that will offer dining, both of which will be surrounded by fountains and an outdoor garden.

The plan calls for 726 rooms of the original hotel to be converted to 394 rooms and 63 condominiums. The two new towers will contain 290 condos and 94,000 square feet of retail and restaurant space, and an additional 100,000 square feet of office space. 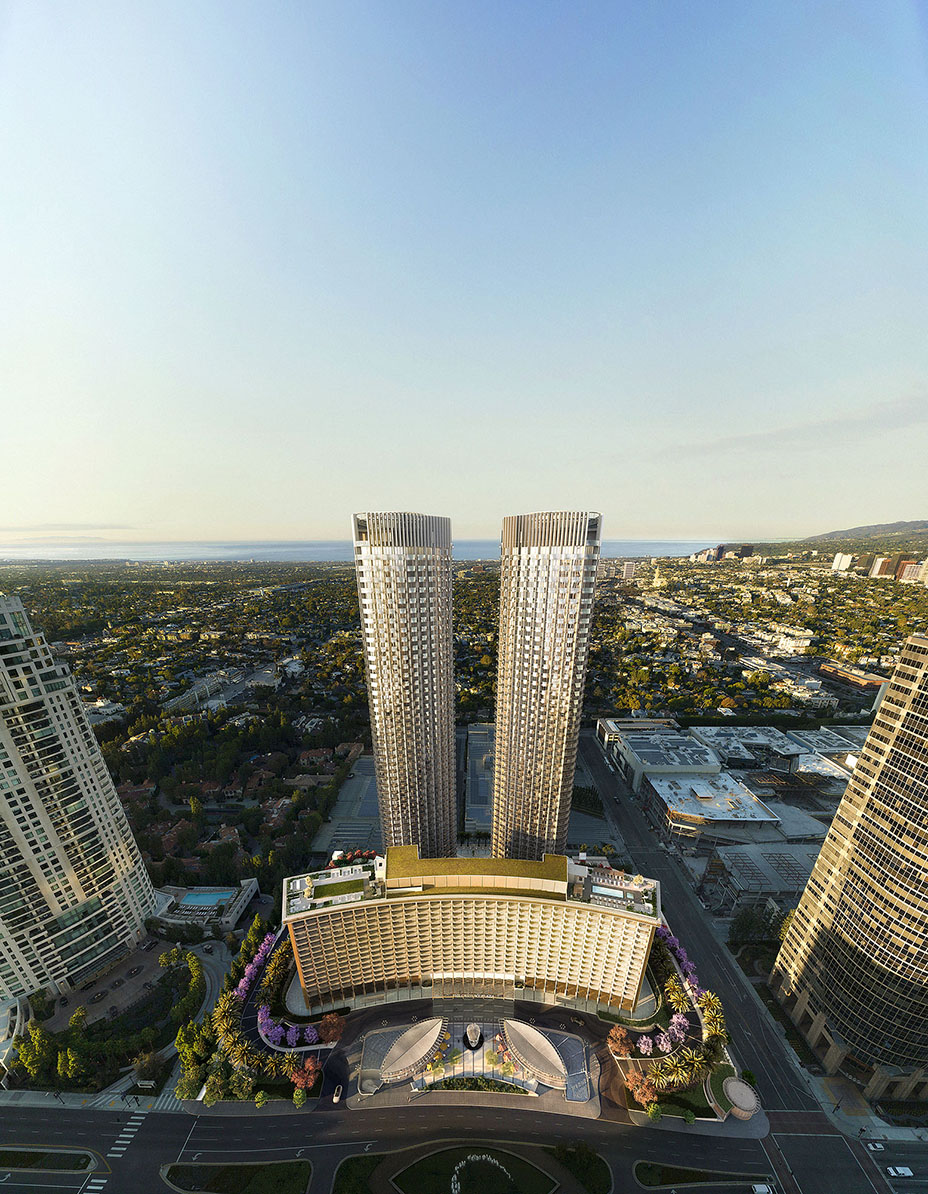 An aerial view of the $2.5 billion project.