Back in fall 2017 when we first looked in on the Broadway-bound adaptation of Disney’s 2013 animated blockbuster Frozen, the stage show was an earnest work-in-progress on its way to becoming what producers hoped would be yet another pillar in a multibillion-dollar franchise that included films, books, hit songs, theme park attractions, ice shows and countless brand extensions.

Now, after 20 months in New York, Frozen the Broadway musical has sufficiently fulfilled its commercial promise to become an empire all its own — if not an unstoppable behemoth on the order of The Lion King. (Broadway grosses will hit $140 million this weekend.) While cloned productions are headed to London’s West End (with Samantha Barks on board to play Elsa), Sydney and Tokyo in 2020 and Hamburg in 2021, a new American production — the first national tour — opened Friday to a huge ovation at the Pantages Theatre in Hollywood where it will stay for a two-month run before heading off to blanket North America in snow.

And this is all on top of the current film sequel, Frozen 2, which debuted in multiplexes over Thanksgiving to a box office-shattering $358 million global take and looks poised to cross the $1 billion mark before year’s end.

With numbers, demand, staying power and worldwide adoration for this brand at yet another peak, what could possibly compel the creative team for this stage iteration of the original Frozen to keep working on the show? 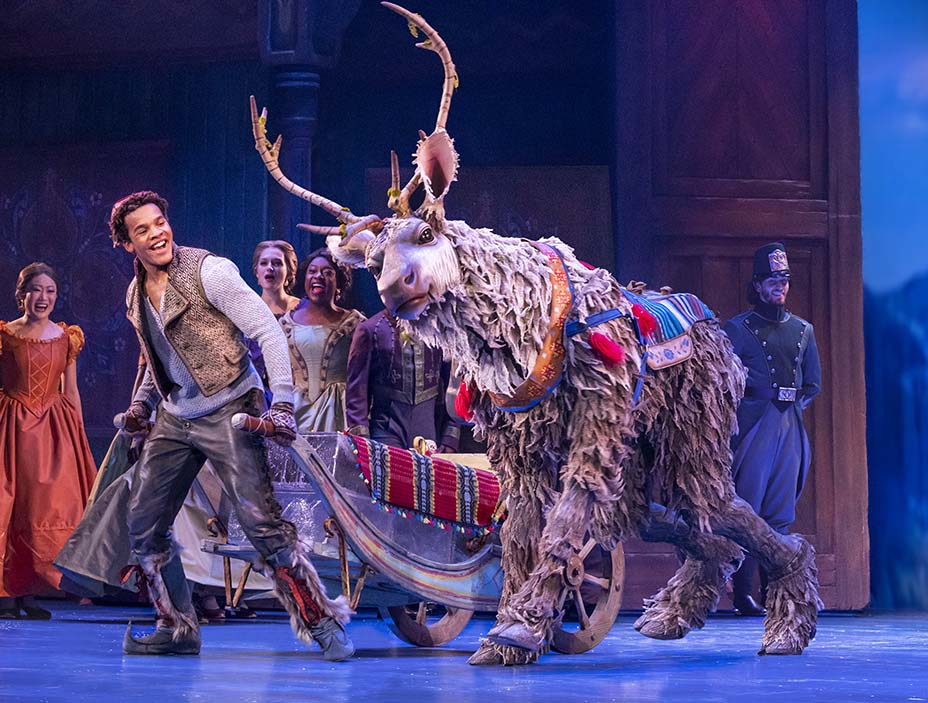 Yet Frozen the musical keeps evolving, and not just since its incubation at Denver’s Buell Theatre, where moody lighting and drab colors suggested producers were intent on creating something “ambitious,” even if they weren’t entirely sure how. Through smart cuts and additions, a little Disney magic and ongoing tweaks, the tale of sisters Elsa and Anna in search of one another finally lands in a way that a commercial blockbuster should.

Maybe it helps that newcomer Caroline Innerbichler as Anna is this production’s real find — an old-school triple-threat who just plain pops and carries the evening. If she doesn’t go on to the lead role on Broadway when the original Anna, Patti Murin, vacates that slot in February, something’s rotten in the land of Arendelle. (Same for her mini-me, young Anna, portrayed at Friday’s performance by adorable Stella R. Cobb.)

Or maybe it’s that Sven the reindeer, created by master puppeteer Michael Curry and portrayed at this performance by Collin Baja, is now a work of Broadway art so magical it has no equal.

Plus this touring production goes an atypical step further — showcasing new material that isn’t even in the Broadway show (yet).

Among the brand-new stuff is a scenic overhaul that brightens the look and sharpens Jeremy Chernick’s special effects — as well as a plaintive Act II duet, “I Can’t Lose You” for Anna and Elsa (Caroline Bowman), which was much needed in a show that sometimes seemed as if the women were in parallel productions.

The ending also has been substantially reworked since its earliest days, not just to include a reprise of “Let It Go” but also featuring the newly healed citizens of Arendelle marching triumphantly toward the audience Les Miz-style. Manipulative as it is, it works — tying the preceding two hours together in a way earlier incarnations did not.

There are still pedestrian moments — songs that don’t quite pay off, choreography that should be more imaginative. But director Michael Grandage’s latest version moves faster and grabs heartstrings. And the entire company is, in fact, so polished, it could be dropped into the St. James Theatre in New York tomorrow without missing a beat.

Though its pre-Broadway days were just a little more than two years ago, today’s Frozen arrives, of course, in a new cultural climate. After an onslaught of revelations, Time’s Up think pieces and general public enlightenment, the girl-power tandem that was the focus of so much attention when this tale came to Broadway now seems much less novel — much more normal, as it should be.

But was the idea of two strong women leading a Broadway musical really that earth-shattering to begin with? Didn’t we have Roxie and Velma 45 years ago; Glinda and Elphaba in the aughts? 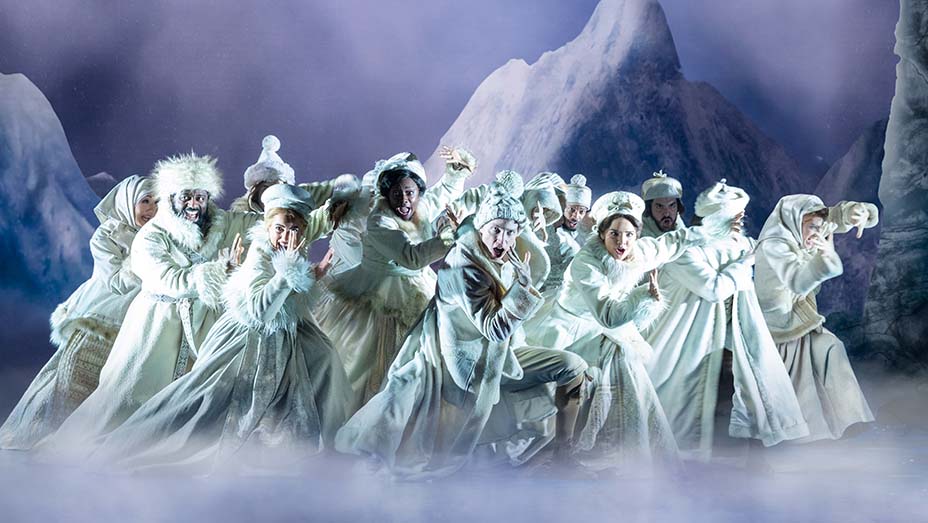 It’s still refreshing to see a Disney show in which a prince’s kiss is not the “true love” cure-all, all while the women rescue themselves and one another. But Frozen’s dual royals — with their tiny waists, wrinkle-free beauty, flowing hair and overly polite affects — still conform to traditional Disney princess stereotypes. What’s always been needed is a little more scruff. Perhaps in the next tweak Prince Hans could run into Anna’s icicle —10 times.

Elsewhere on my wish list: Can we please do away with the hot mess that is Olaf the snowman — part man, part puppet, all distraction. This two-headed beast continues as a mystifying misstep. Why, why, why is this still happening? Please, Disney, make this guy either a puppet or a person, but not both. Of course, Olaf wouldn’t be so dreadful all by himself. But when placed next to miracles like Sven, or the eye-popping special effects of Elsa’s “Let It Go” wardrobe change, the sins of this clunky rendering are laid bare.

Ancient theatergoers like myself can long all we want for the sublime steps of Jerome Robbins, a time when everything wasn’t tied to infinite merchandising schemes and 20th century audiences (not weened on American Idol) who knew better than to confuse volume for quality.

But it’s probably time to let it go. Disney’s role in modern-day Broadway’s boom (and in fact in revitalizing the actual New York City neighborhoods that make up the theater district) cannot be underestimated. Plus, any musical that even before it’s out of the gate counts millions of tiny superfans  — many dressed in princess gowns, wigs and fancy shoes for the L.A. opening — has already accomplished more than most ever will.