Best known for his Oscar-nominated performance as Lt. Dan in 1994’s Forrest Gump, Gary Sinise has dedicated 40 years to volunteering and advocating on behalf of U.S. veterans. In 2011, he founded the Gary Sinise Foundation, with programs like Relief & Resiliency Outreach providing full support last year for 8,335 of those in need recovering from injury, loss or trauma.

Today, his foundation welcomes a new program into the fold, Snowball Express, a community-based initiative defined by its annual four-day event uniting roughly 2,000 Gold Star families that just wrapped up last week in Dallas. Activities include sports competitions, dances and amusement park rides — all geared toward providing new and happier memories for children of the fallen.

“We have opportunities to grow Snowball, involve more children, more families. Unfortunately we have so many,” Sinise says of the program, to which he’s been donating time and money since it’s inception in 2006. “We want to be able to take care of as many families as possible.”

Over the years, The Lt. Dan Band, with Sinise on bass, has played the event, giving him a chance to watch some of the kids grow up. “It’s sad to see so many of these children all in one place at the same time,” he says. “On the other hand, it’s very healing having them all together in one place, getting so much love.”

The son of a family of veterans from every major conflict since World War I, Sinise was inspired by talking to his wife’s siblings about their experiences in Vietnam. “They came back to a nation that turned its back on them,” he says. After playing the wheelchair-bound Lt. Dan, he began volunteering with disabled veterans. But 9/11 was the catalyst that turned nearly all of his free time into volunteer work.

“I didn’t want our Iraq and Afghanistan veterans to come home the way our Vietnam veterans came home, to a nation that really didn’t support them,” Sinise explains. “I just wanted them to know they were appreciated. That led to the creation of my own foundation.”

With money collected from roughly 35,000 private donors, his foundation, a 501(c)(3), funds programs like R.I.S.E. (Restoring Independence Supporting Empowerment), which recently completed 61 specially adapted smart homes tailored to disabled veterans. The Arts & Entertainment Outreach program has provided free performances at Chicago’s Steppenwolf Theatre Company (co-founded by Sinise), and Los Angeles’ The Geffen for a total of 6,400 veterans. The program has its roots in a mid-1980s production of the Vietnam veteran-written play, Tracers, which Sinise directed at Steppenwolf. 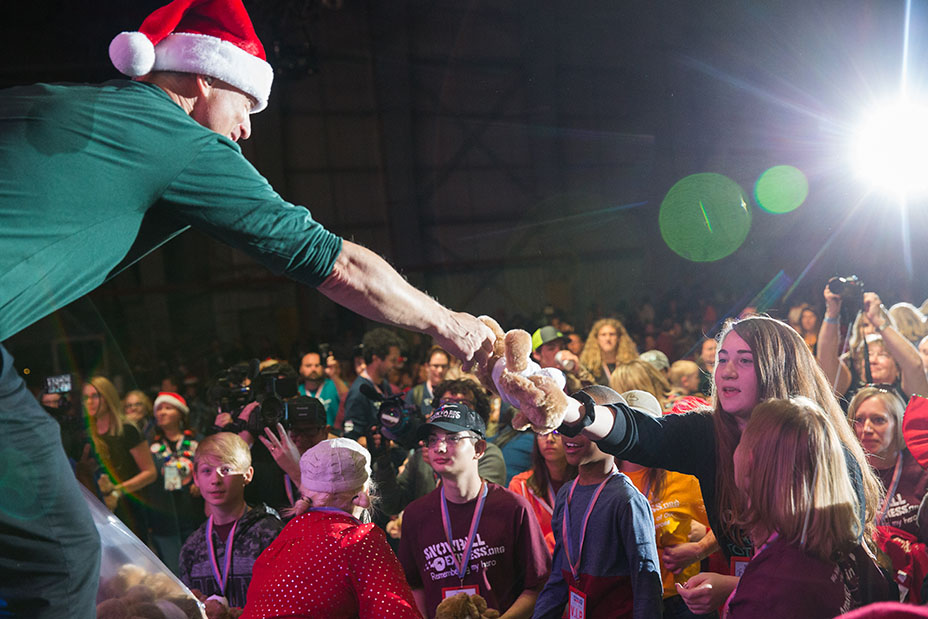 “It’s a great way to combine two very important parts of my life, my theater-and-acting life and my veterans’ support,” says Sinise. He recently recommended his friend, wounded former Navy Seal Jason Redman, for a guest spot on Hawaii Five-0, executive produced by Sinise’s former CSI: NY producer Peter Lenkov. The episode aired Dec. 15. “Whenever they need a veteran for a storyline, I get a call. They had a particular character they were looking for. I called Jay up and said, ‘Hey, get in touch with these folks. Send them a videotape and go get that part!’ I’m thrilled for him.”

What also thrills him is the title, Grand Marshal, which will be his at this year’s Rose Parade Jan. 1 in Pasadena, conferred in honor of his work with veterans. Some activists criticized the choice as divisive — Sinise is the founder of Friends of Abe, a group of Hollywood Republicans who hosted candidate Donald Trump in 2015, but he has not been involved with running the group for several years and did not attend the Trump event.

Sinise has no comment on this or other controversies surrounding the president’s dealings with Gold Star families like Khizr and Ghazala Khan and Myeisha Johnson, saying only, “I don’t expect the government is ever going to be able to meet all the needs of the millions of veterans in this country. But I do hope and look forward to when the government does a better job.”