The two-time Tony nominee, who made his Broadway debut in Lin-Manuel Miranda’s breakout musical In the Heights, first connected with Hamilton back in 2013, when he played King George III in a workshop staging. After leading the hit musical’s Chicago and San Francisco productions as Aaron Burr, he brings “The Room Where It Happens” to Los Angeles’ Pantages Theatre through Dec. 30.

“It was wild — I felt like we were at a rock concert,” Henry told The Hollywood Reporter of the run’s star-studded opening night. “The audience was incredible. I haven’t experienced energy like that onstage before, and I loved every second of it.”

Henry, 33, goes Off Script to talk tackling that onstage stunt, relaxing in L.A. and preparing for Broadway’s buzzy Carousel revival opposite Jessie Mueller and Renee Fleming.

What do you love most about playing Aaron Burr?

It’s such a meaty part. I try to find the humanity in him. I can’t think of him as a villain, because no one really starts as a villain. He’s a regular guy who is the product of a lot of disappointment, who happened to take some very wrong turns and made this big mistake.

I’m most excited about his last line: “I should’ve known the world was wide enough for both Hamilton and me.” With all the things going on right now, I think we have to believe and hope that there is room for all of us here in this country. No matter where we’re coming from, no matter what we look like, we all have something special to contribute. 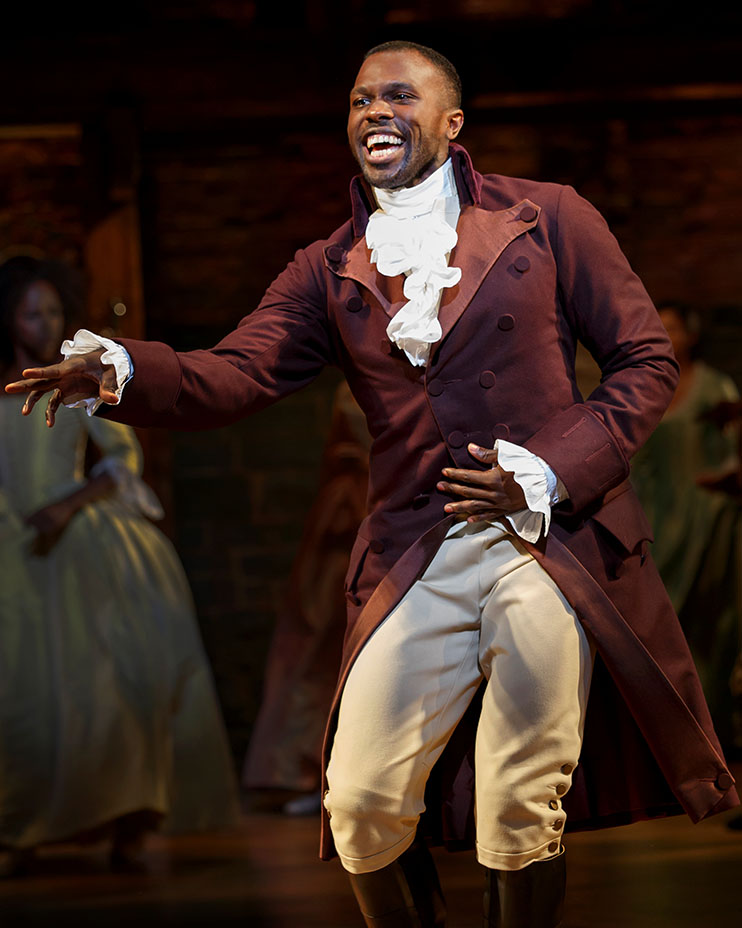 Who were you most excited to see on opening night?

My boy, Sterling K. Brown. He’s one of the most talented guys ever and equally a really solid dude. I had worked with him on a season of Army Wives in 2013. He came at me with a huge bear hug and lifted me off the ground. It was such a nice reunion.

What new habit have you taken on for this role?

I have to do some kind of rigorous workout six days a week because it helps me maintain my stamina for the three-hour show. Lately I’ve been hitting up that Barry’s Bootcamp. And in “The Room Where It Happens,” I jump off a table, and that little jump requires so much time outside of the show. So I make sure to jump a lot in my workouts and do a lot of extra stretches just to prepare for that one move.

I had a horn inside my dressing room in Chicago, and when people knocked, I’d ring the horn because people couldn’t hear when I’d yell, “Come in!” It’d hurt my voice sometimes, and you gotta save it. I left it in Chicago, but my wonderful castmates sent it to me in San Francisco. And now that we’re open in L.A., I’ll put it in.

I meditate. Burr goes to some pretty dark places, so to counterbalance that, I make sure my body is relaxed and my mind is clear. Sometimes I’ll think about one word that I want to color the whole performance — it might be “grace” or “calm” or “status.” It’s a small thing to focus on each time and make it unique.

How do you unwind after a show?

I try to do the stage door as often as possible because these people are such big fans of the show and they wait for a long time. Afterward, I don’t fall asleep that quickly. It’s like running a marathon — you’re tired, but you’re also amped. So I watch a lot of comedy and sports, and do things that aren’t that serious and don’t require that much thought.

I’ve studied this dude.. and today I got to tell him what an inspiration he has been when he came to see @hamiltonmusical tonight. His precision, focus and killer instinct is something I’ve always admired and continue to pull upon today. Lastly: he said this- “If we had half the focus and precision y’all had on stage tonight, we would have never lost a championship”. #Imdead #DreamBig #BlackMamba

What do you do on your days off?

I’m excited to get to know [L.A.]. The weather is amazing, even coming from San Francisco, where it’s like 60 degrees all the time. It’s nice to put on a tank top and be out here. I hear the hiking is nice. Of course, the famous Runyon Canyon, but there are a couple places off the beaten path that the locals are telling me I should go to. And the beaches — I’m from New York, so our beaches are, uh, a little different.

How are you handling Carousel preparations while touring?

It’s a little bit of a challenge, and now that the show’s open, I have more time to focus on that. So far, I’m on calls with Jessie Mueller to talk about another meaty role, about redemption and getting a second chance at life. As an actor, you always want to be more busy than not, so I’m grateful to be swamped and overwhelmed with opportunity. I’m fully living in this moment, but I’m doing a lot to prepare so I don’t throw away my shot, as they say.