The queen of Halloween costumes has killed it again. Supermodel and television personality Heidi Klum (whose new Amazon Prime Video fashion competition show Making The Cut will debut in 2020) stepped out for her big costume reveal at her much-anticipated 20th anniversary Halloween party on Thursday night. The location was Cathédrale restaurant, tucked inside the Moxy Hotel, in the East Village neighborhood of New York City.

The moment was epic, as eerie sound effects were cued up before Klum arrived in the back of a slow-moving, blue-lit glass “biohazard” truck with blood-streaked glass windows. Roaming around the back of the truck like a hungry creature, she slowly slithered out alongside her husband as of August, Thomas Kaulitz, who was dressed as a bloodied-up zombie astronaut. Klum hissed at the audience, as they burst into applause. 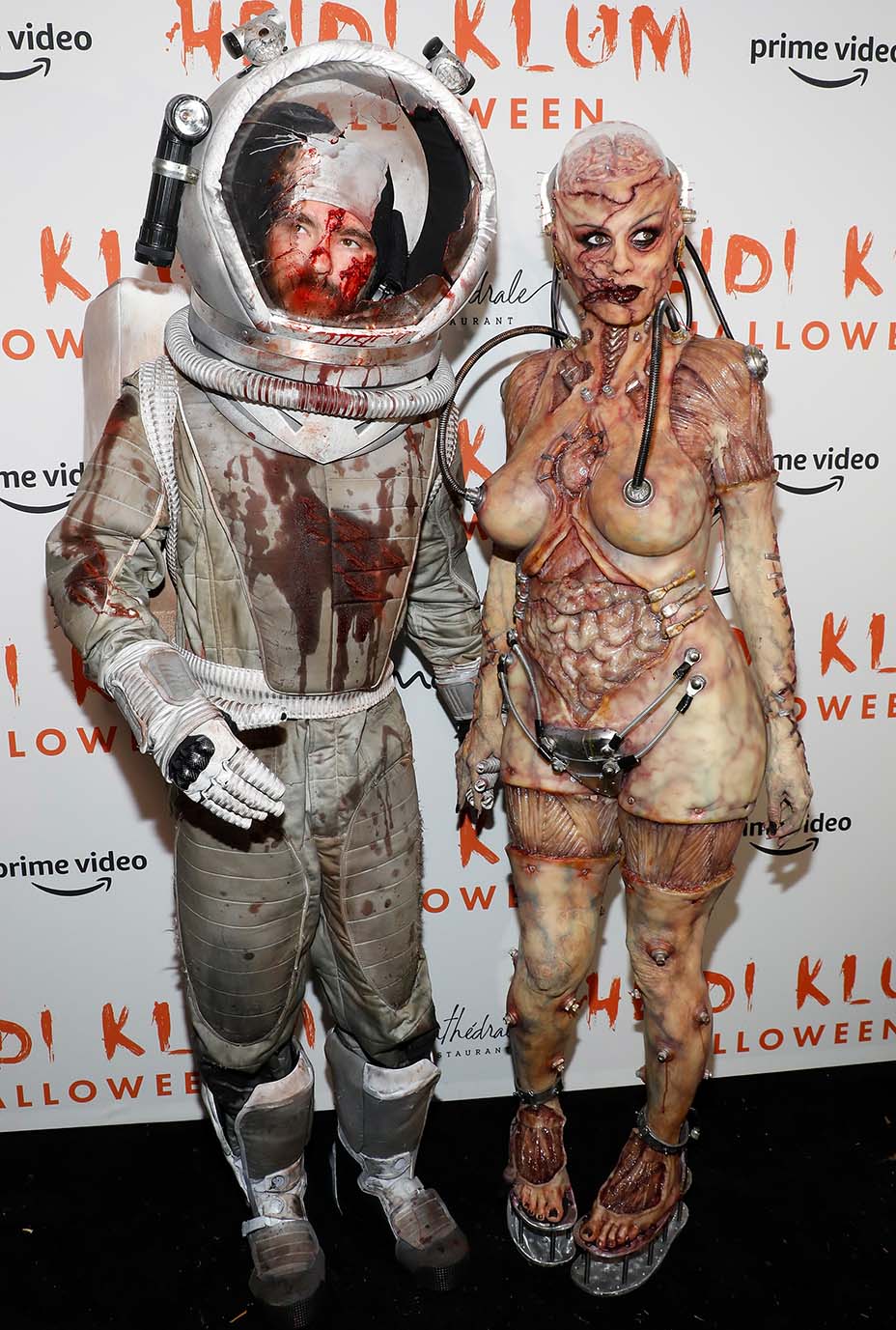 Her detailed prosthetic costume, which took about ten hours to apply, is a masterpiece in its own right. Features included a mouthful of silver grills, a glass-encased brain with glowing wires that tied into her back, a faux facelift nailed into her head with daggers, skin peeled back to expose the intestines and muscles, a metal plate over the pubic area, and wires protruding from her nipples. All in all, the look might be described as a futuristic alien with Frankenstein vibes.

“The inspiration was Tokio Hotel, which is the band of my husband, as they believe in aliens,” said Klum before entering the venue.

“Everyone does, no?” asked Kaulitz. “I was an astronaut in outer space, looking for a new planet for the humans to live on, right, because we already destroyed ours. We messed this one up, so I was out there touring the universe and I found this creature. I thought, ‘Wow, she looks good.’ So, I brought her home, as she might have some useful information for us.” 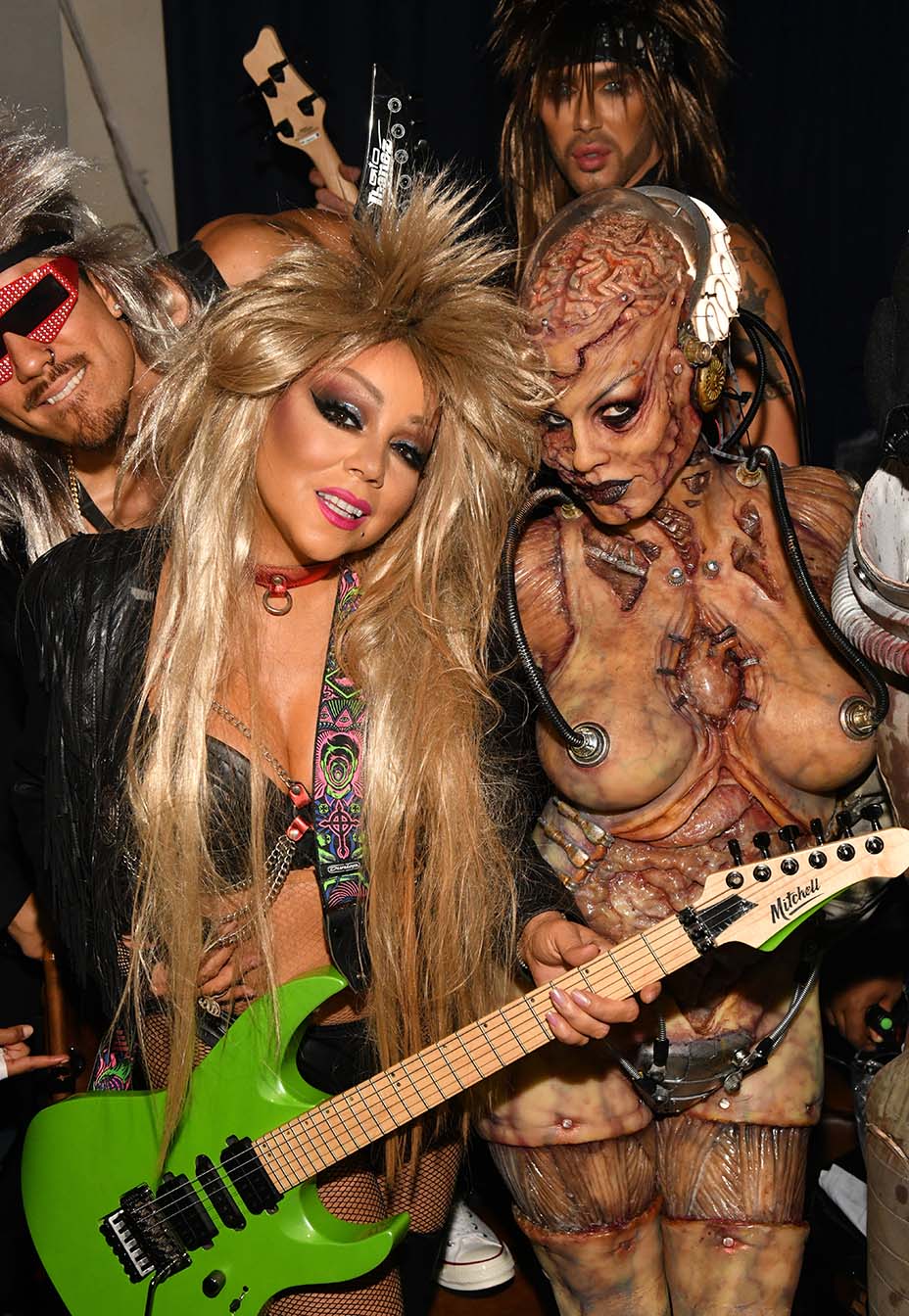 A dedicated partner, Kaulitz has been game to collaborate on Klum’s over-the-top costuming, this year posing as a zombie astronaut with a bloodied face and tarnished suit, his face gashed from broken glass. The couple kissed on the red carpet (their nickname for each other is “schatz,” meaning “treasure” in German). Last weekend, they made an appearance at Paris Hilton’s Halloween party in Beverly Hills in costumes with coordinating sparkly silver face paint and glow-in-the-dark green hair; while last year, the duo dressed as Princess Fiona and Shrek.

“I started getting ready at 10 a.m.,” said Klum, noting that she is a fan of H.R. Giger’s Aliens. “But it’s not supposed to be something out of Aliens. It could also be a Frankenstein because, when you look at all the staples on my arms, it kind of leans onto that a little bit. It’s bionic, too. It’s a little bit of everything.”

Earlier in the day, Klum prepped at the Amazon store on 34th Street in Manhattan for a 10-hour session. Onlookers watched through the front window as the prosthetics team wrapped her in a gelatin-like bodysuit, then painted on lifelike veins and scars and glued wires onto her glowing brain.

At one point, Klum asked: “Is my brain still glowing?” After affirmation, she squealed, “Yay! The lights are on and someone is home!”

On Wednesday, Klum teased a video on her Instagram account of herself doing an early run with film and special effects makeup artist Mike Fontaine and film prosthetics artist Mike Marino. In recent weeks, the 46-year-old has hinted at her costume on social media, but nobody was able to crack the code — even after she displayed a mouthful of golden grills, a blue wig with matching brains, a Frankenstein-patterned jacket by Prada and a clip of herself singing to Madonna’s Like a Virgin accompanied by an evil nun filter.

The annual event started as an experiment, after Klum noticed a lack of cool Halloween parties and stepped up to the plate. The first year only some attendees wore costumes, so Klum created a “no costume, no entry policy,” and, since then, the party has gotten bigger and better, as have Klum’s costumes. Initially inspired by the annual Carnival festival in Cologne, close to her German hometown, Klum made all her own costumes by hand until 2011, when she upped her game and hired a makeup and styling team.

The key to a great Halloween costume, advises Klum, is when people are totally unrecognizable, she told The Hollywood Reporter at last year’s soiree. Her very first costume in 2000 was a goth dirndl queen. In 2001, she dressed as Lady Godiva, making an entrance on a horse on loan from the New York Police Department; and, in 2008, as a Hindu goddess with eight arms (while the costume was inspired by a recent trip to India, Hindus were angered that she would pose as a sacred figure for publicity). In 2015, it took nine hours to transform her into Jessica Rabbit from Who Framed Roger Rabbit? And when she dressed as an 80-year-old version of herself in 2013, she was so unidentifiable that she could barely get into her own party. A true marker of success.

According to Klum, she and Kaulitz began to create the concept for their costumes last November. “It always starts like that,” she said. “As I take this off tonight, I’ll start thinking about what I’ll be for next Halloween.”

As for revealing her costume theme for next Halloween — fat chance. “She’ll never tell,” said Kaulitz. “I didn’t even tell anyone what I was going to be until today!” added Klum.