When Heidi Klum held her first Halloween party in 2000, she never imagined that her yearly fete would still be one of the most buzzed-about events in New York nearly two decades later. “It’s crazy,” she tells The Hollywood Reporter. “I never expected that this party was going to go on for so many years, but here we are!”

With 18 star-studded Halloween parties — and an array of headline-making costumes — under her belt, Klum’s name has become synonymous with the spooky holiday. The multihyphenate is not just a supermodel, TV personality, designer, author, actress and producer. To many, Klum is revered as the undisputed Queen of Halloween, a title she’s not only proud of, but one she takes very seriously.

“I embrace that title! And I always want to live up to it, year after year,” says Klum, whose love for dressing up stemmed from her childhood in Cologne, Germany, where the country’s annual Karneval celebration is filled with plenty of candy and costumes — but nothing scary. “When I moved to America, I immediately fell in love with Halloween and the spookiness of it. All that was missing was a fantastic party. It felt like a real opportunity for me.”

Indeed, at the turn of the new millennium, Klum hosted her first-ever Halloween party — a night she says she’ll “never forget.” The runway fixture welcomed a number of notable names within fashion, music, entertainment and, much to Klum’s amusement, the British monarchy.

“For it being my first party, the turnout was great. Way better than I expected. Prince Andrew was there!” she recalls. “His justification for not wearing a costume was, ‘I’m not Prince Andrew. I came dressed as Prince Andrew!’ And we just let him in. It was funny.”

Klum was admittedly charmed by His Royal Highness’ cheeky no-costume excuse, but she more fondly remembers the “few really unique” getups from her inaugural bash. “This man had basically carved out the inside of a twin mattress, put his body inside and just had his head and arms sticking out,” she says. “He came as a bed and really went all out. It’s still stuck in my memory. This poor guy was walking around like a twin mattress all night long, but he looked great! So unique.”

But, according to Klum, not everyone stepped up to the plate like Mr. Mattress. “The majority of guests were not super dressed,” she says. “So, after that, I implemented a ‘no costume-no entry’ rule. We quickly taught people that if you don’t come in a costume, you’re not getting in. The costumes get bigger and better every year. And that’s because guests know they won’t get in unless they bring it.”

Concertedly, Klum goes “full-out” with her own costumes each year, hoping to inspire partygoers to do the same. Since 2011, she has employed help from professionals — including Prosthetic Renaissance founder Mike Marino, who’s aided hair and makeup departments for films like 2001’s Planet of the Apes and 2010’s Black Swan, among others. Marino has used heavy prosthetics to craft several Halloween looks for Klum, including her gorilla costume in 2011 and her 2015 Jessica Rabbit re-creation. 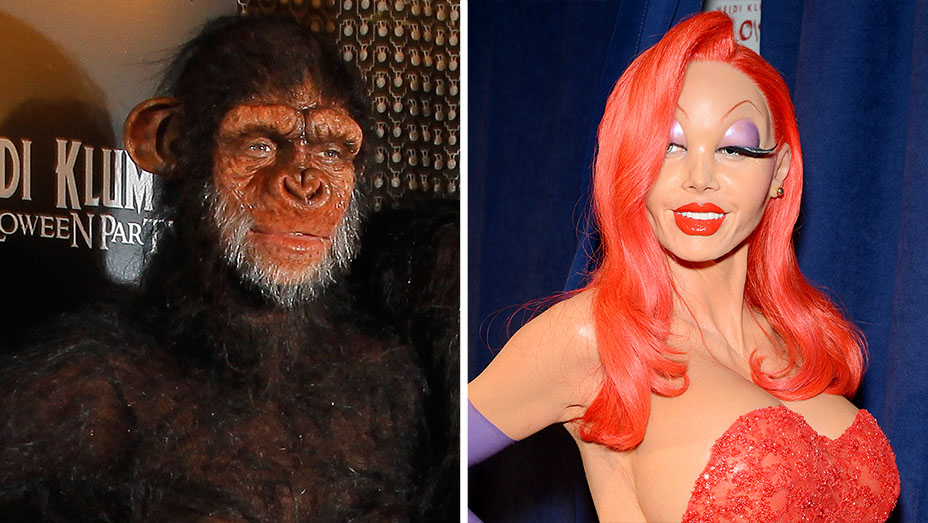 “By me doing crazy, elaborate outfits as the host, my hope had always been that all my guests would follow. And it’s worked because, over the years, people have become increasingly more outrageous with their costumes,” says Klum, whose party continues to attract an eclectic group of stars, with the likes of Gabrielle Union, Mike Myers, Bethenny Frankel and Zac Posen attending. “The party has become almost legendary. It’s epic. I feel like my love for Halloween has made other people fall in love with the holiday, too.”

Below, Klum talks more to THR about her favorite holiday, teases this year’s “very, very sweet” costume and reveals details of her new, yet-to-be-titled Amazon fashion series with Tim Gunn.

At what point in the year do you start thinking about your Halloween costume?

I start thinking about it on Nov. 1! I usually have two or three ideas that I’m playing with and then I decide on one thing. You have to decide at one point because pieces have to be built and all of that. So right when the party is over, the morning of Nov. 1, I start thinking, “Maybe next year, I’m going to do that one that I didn’t do this year.” And then, obviously, throughout the year new things come into my mind because maybe I’ve seen a movie, or I went to a country and was inspired by something I saw there.

Where do you find most inspiration for your costumes?

I get inspiration from anything and anywhere. For example, when I was the robot in 2010, it was because I had been inspired during a trip to Disneyland. I saw the parade and saw all these people walking on stilts. I was like, “Ooh, I want to be on stilts!” I didn’t turn out to be a Disney character, but I just loved the idea of walking on stilts and being really tall. And then I thought, “Who could I be? Oh, a superhero robot!” So, then I also had to learn how to walk on stilts. I’m fully dedicated.

When you look back at all your costumes, does one stand out as your favorite?

I definitely loved being turned into the old lady in 2013 because it wasn’t me becoming someone else. It was me becoming me — just older! I was looking into the future, really. I personally loved that a lot. I also love being a cartoon. I loved being Jessica Rabbit in 2015. I also loved doing Michael Jackson’s “Thriller” last year. But I really love me just being old. That was a lot of fun. 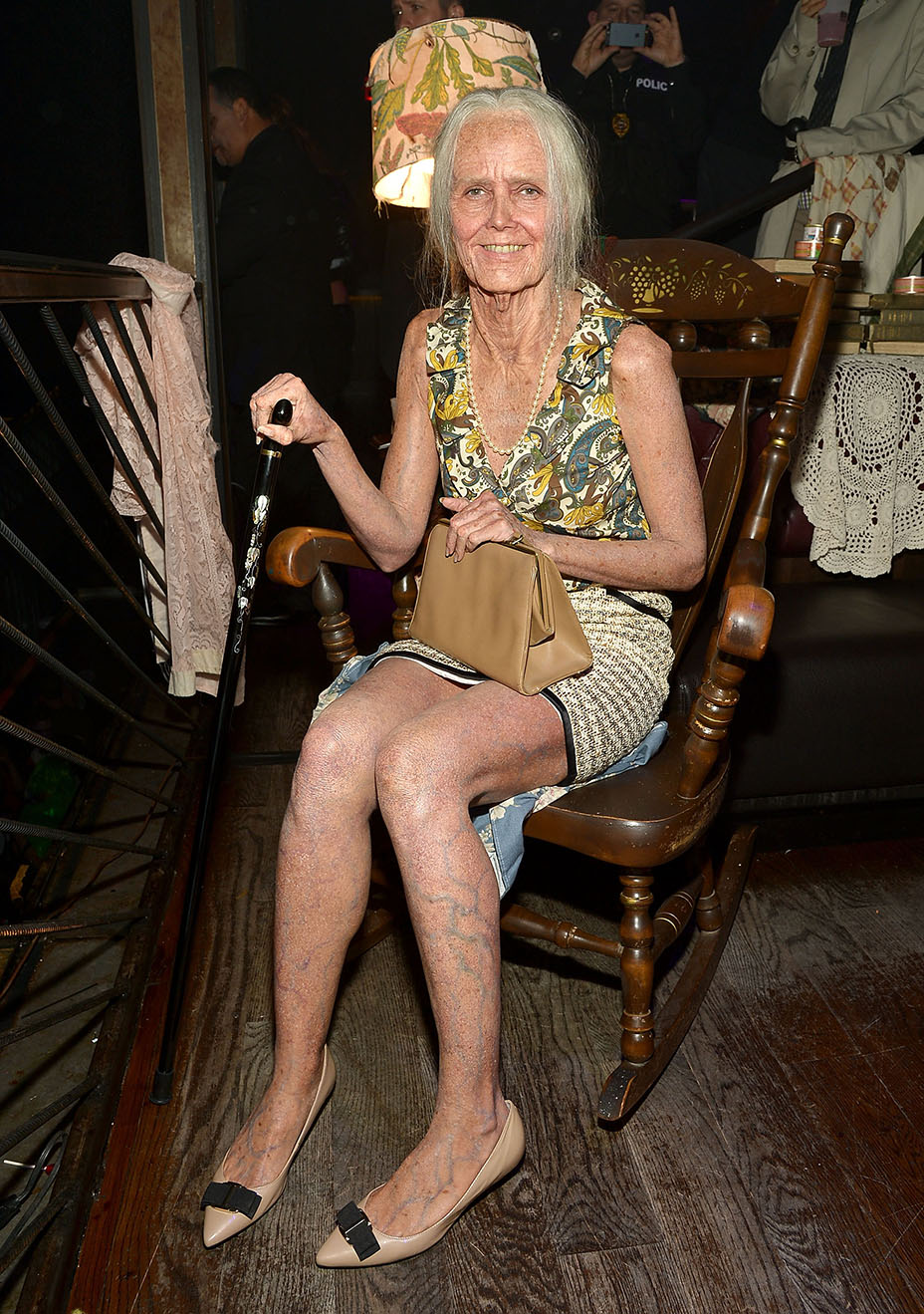 Are there any costumes that you regret?

No, I honestly love all of them. Obviously, from the very beginning, if I would have had the resources that I have now, everything would have been much bigger and that much better. In 2000 — and that’s a really long time ago — I didn’t have this team around me. I didn’t have all these amazing people helping me out with costumes. For sure, I could have done all of these much better with the help of professionals. But I didn’t have them, so I was doing it all myself.

Where do you keep your costumes?

I have every single one archived. They’re all in storage. Everything’s labeled, packed away in a box. Everything is very organized.

What is the key to an incredible Halloween costume?

You’ve done both sexy and scary costumes over the years. Do you have a preference?

I don’t prefer one or the other. As long as it’s unique and you really follow through all the way, then the costume will always turn out great whether it’s considered scary or sexy. I’ve never done sexy just to be sexy. When I did Jessica Rabbit, I don’t think I was necessarily sexy. She’s a cartoon and has major curves, so I had the biggest boobs and the biggest butt. I don’t know how sexy or pretty it was, but at the end of the day, I feel like I followed through. You pick your idea and then you follow through with all the details. It’s all about the execution.

What can you tease about your costume this year?

This time my costume is going to be very, very sweet — because I wasn’t cute at all last time around as the werewolf in “Thriller.”

I told you I’d share more soon! Here is another sneak peek at my #HeidiHalloween costume! Thanks @prorenfx, I can’t wait for you all to see how it turns out

Are you ever nervous that your costume won’t turn out as planned?

It’s always a little scary because there’s no dress rehearsal. When you have prosthetics and all these bits and pieces that are being built, that’s not something that we can rehearse. We try to really think of everything ahead of time. And then when the day finally comes, you never know how it will actually turn out. So, it’s always a little nerve-racking leading up to the end. But as my friend Tim Gunn would say, “Make it work!” And I feel like, for the most part, I do always make it work.

Speaking of Tim Gunn, you both announced in September that you’d be leaving Project Runway for a new fashion series on Amazon. How’s that coming along?

We are in the middle of everything. It’s going to be a fashion design show that, for the first time in history, will be global. It’s something that I’m very, very excited about because it’s something that hasn’t been done before. It’s very exciting sitting with Tim and the Amazon team. We’re developing the concept fully and we’re looking at production companies. It’s moving along nicely and we’re all super excited to start shooting. But we’re still in the development stages.

How will this show differ from Project Runway?

I’m really trying to straddle the artistry of fashion design and the commerce part of it. When you’re online and you’re watching your favorite show, which is hopefully going to be ours, you’ll have the commerce aspect for the first time. When you see a design that you actually love, you can buy it. It’s not only great for the consumer, but it’s also amazing for our designers. We never had that aspect where we could actually help the designers to really branch out into the real world like this on Project Runway.

It is a fashion competition design show, but it’s not just in America. It’s different from Project Runway because we’re going to be hopefully expanding this into 200 countries. It will be global and we’ll have the best of the best from around the world competing with each other.

After so many seasons on Lifetime, did Project Runway‘s return to Bravo feel like a good point to try something new?

The new season was already penciled in to our regular shooting schedule. But then, obviously with The Weinstein Company, after everything had come out and everything with Harvey Weinstein blew up, the company went bankrupt and, therefore, the show was moving to a new network. It made me take a step back and think. Instead of jumping right back into it, I had a moment to really think about what I wanted to do next.  All around, this new show with Amazon will be better for the designers and for us to take this global. After 16 years, I thought it was time to move on and let someone else take the baton and continue with Project Runway.

What are your thoughts on Karlie Kloss and Project Runway alum Christian Sirano taking over for you and Tim?

Christian Siriano is an incredible designer. I think he will be a great mentor because not only is he established in this industry, but he has been a contestant on the show and he knows what it’s like to win something like that. It’s perfect for him. I’m excited for Christian and I’m also very excited for Karlie. She’s a great model and I know she’s had some hosting experience. I’m leaving Project Runway in great hands and I couldn’t be happier for Christian and Karlie.