Over the 55 years since 10-time Tony winner Hello, Dolly! debuted on Broadway, there have been four return engagements — but none quite as splendid as the 2017 production from director Jerry Zaks, a candy-colored feast which, together with supernova Bette Midler starring as meddling matchmaker Dolly Gallagher Levi, picked up four new Tonys while shattering box office records.

Two months after it closed in August of 2018, the show hit the road for a first national tour, now with Betty Buckley in the title role. It would be an unenviable assignment, perhaps, for some performers — and not just because Bette Midler is Bette Midler and this particular production carries her stamp, but because the title role has been inhabited by all manner of legends. Barbra Streisand played Dolly in the 1969 movie, and Carol Channing, who originated the role on Broadway, revisited it throughout her career. Among the other greats who stepped into the part were Ginger Rogers, Mary Martin, Ethel Merman and Bernadette Peters.

But Buckley — ever fearless in a career full of confident left turns in music, movies, television and onstage — is unfazed. This Dolly isn’t just “crowin.’ ” She really glows. At 71, the actress appears as game as she was at 22, unable to conceal her joyous high.

And, with all that’s going on in this sumptuous production, who wouldn’t be joyful? It’s not quite a perfect replica of the recent New York spectacular, but very close, particularly where it counts. Though I missed the passerelle, which at the Shubert Theatre brought Midler literally face-to-face with fans (and would be a welcome addition inside the cavernous Pantages), that’s a quibble.

Let’s start with the essential co-stars here, designer Santo Loquasto’s exquisite sets and costumes, which look as if 19th century New York had been spun out of cotton candy. The mere entrance of the ensemble, decked to the nines, strutting ever so precisely to “Put On Your Sunday Clothes,” is a visual and vocal feast — alone worth the price of admission.

That showstopper is one of several in Jerry Herman’s timeless score (“Ribbons Down My Back,” “Elegance,” “It Only Takes a Moment”) that wakes the soul. While Dolly has always teemed with quaint notions of courting, romance and marriage, beneath it is the simplest message: Whatever life’s hardships, get out there and live.

That sentiment is embodied not only by Dolly, a widow yearning to be back in the game, but by every character in this classic (based on Thornton Wilder’s 1954 play The Matchmaker), all of them looking for more out of life.

Of course Dolly, the original “rules girl,” has been hired by cranky “half-a-millionaire” Horace Vandergelder (Broadway vet Lewis J. Stadlen) to find him a wife, but naturally she has other plans for him. Vandergelder’s overworked store clerks Cornelius and Barnaby (winningly played by Nic Rouleau and Jess LeProtto), have their own agenda too, and as they set out on a Ferris Bueller-style day in New York, they form an engaging quartet with winsome milliner Irene Molloy (Analisa Leaming) and her daft assistant, Minnie Fay (Kristen Hahn).

Slapstick and shtick ensue, all of it a setup for the iconic Act 2 sequences at the Harmonia Gardens restaurant, where Dolly’s spectacular entrance atop the grand staircase for the title number is as uplifting today as it ever was.

Inevitably there are also athletic waiters, somehow balancing trays amid a gallant ballet. It’s one of several numbers in which the pure skill of these performers (several from the Broadway cast) and Warren Carlyle’s stirring choreography come together in a way that surpasses what’s typical in even the finest musicals. The dancing alone, based upon Gower Champion’s original work, could be an evening at Lincoln Center.

Wednesday’s opening night crowd at the Pantages, where the show is settling in for a three-week run, rewarded it all with spontaneous cheers throughout. By the time Buckley descended those stairs, beaming in her sparkling red gown and feathered headdress — cakewalking with the ensemble, the place was in a tizzy.

But Buckley, who has been on something of a run in recent years, with turns in M. Night Shyamalan’s Split and AMC’s Preacher, brings more to the evening than comic timing and big songs. She seems to shed real tears in Dolly’s monologues to her late husband Ephraim, during which she begs the universe for signs that it’s OK to move on with her life. It’s in these quiet moments — particularly at the onset of the Act 1 closer, “Before the Parade Passes By” — that she makes the role her own.

It is also worth noting that she’s appearing in all eight performances a week on this 10-month tour — in a show that has often featured alternates at matinees or one night a week because of the taxing nature of the role. Like Hello, Dolly! itself, she’s a trouper, everlasting. 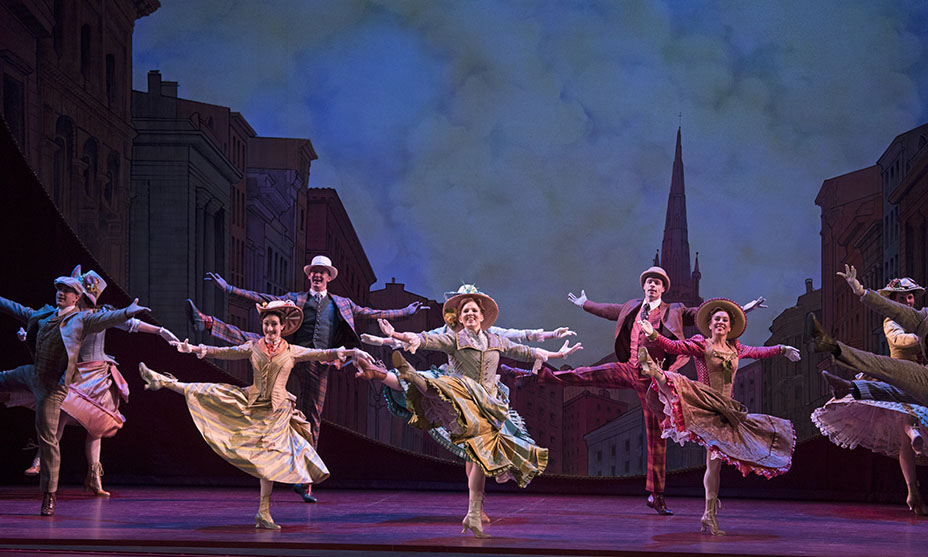