June Gloom; barbecues; sand, surf and bikinis — all conjure images of summer in Los Angeles, that time of year when the sun lingers just a little longer above the rim of the San Gabriel Mountains and cinephiles from all across the Southland seek refuge from the blistering heat in the oasis of their local theater, sipping iced colas as they bask in the air-conditioned indulgence of the cinema.

However enmeshed the visages of beach, sun or chilly theater are with summer in Hollywood, perhaps nothing screams “dog days” quite as much as packing a picnic basket and heading down to the Hollywood Forever Cemetery on a Saturday evening to watch a classic film under the stars at one of Cinespia’s weekly outdoor screenings.

“Cinespia is the ultimate celebration of Los Angeles and my favorite summer event,” Oscar-winning actress Brie Larson told The Hollywood Reporter. “You sit under the stars with people who love movies and this town just as much as you do. The last screening I went to was for Selena — one of my favorite films and one that inspired me to be a performer.”

Since 2002, Cinespia has welcomed film fans to partake in their public showcase at the cemetery on Fairbanks lawn from late June to early September, and the screening series quickly became synonymous with the warm season in Los Angeles.

“Cinespia started with my film club, as I was looking for a place to screen some classic films,” John Wyatt, founder of the film organization, explained. “With all the Hollywood history at the cemetery I thought it would be a unique place to watch some of the films made nearby. The beautiful architecture and starry skies were a good way to lure an audience out to a film they may have never seen.” 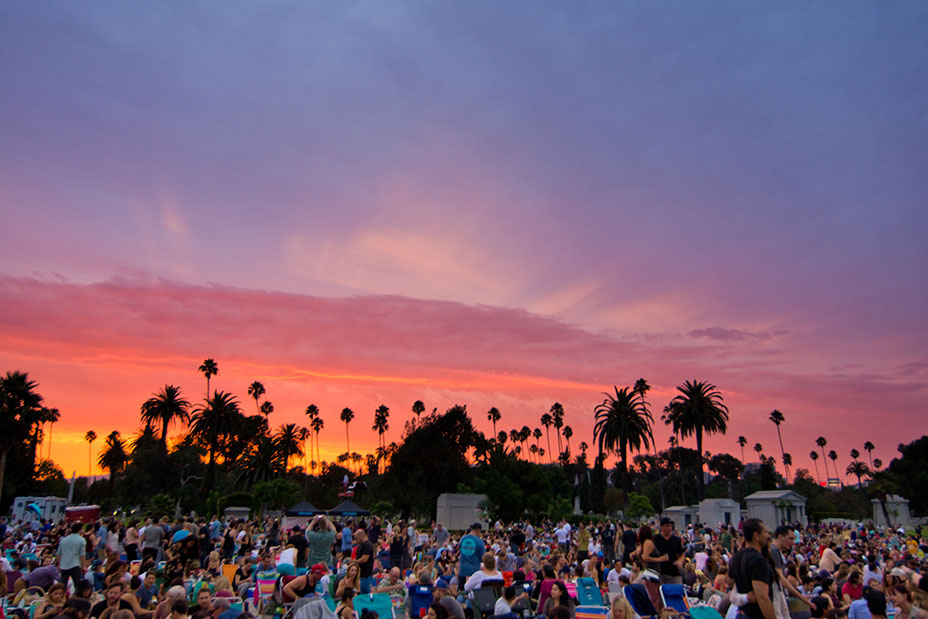 The appeal proved a success as Cinespia has sold out each of its screenings, with thousands of attendees per its 25 screenings a season over the last several years. “The experience of watching a classic film with 4,000 people heightens the experience, it’s something you cannot get in front of your computer at home alone,” said Wyatt.

In the process, it also became a unique event synonymous with summer in L.A., not just for the films on display but also for the communal atmosphere of the event itself, with plenty of A-list fans.

“One of my favorite things about Cinespia are the photo booths,” The Goldbergs writer Kerri Doherty said. “They get creative with the set design, which I think really encourages people to dress up. My first Hollywood Forever screening was Purple Rain, and upon seeing the heart-shaped velvet bed I was immediately pissed that I didn’t come dressed in a white ruffle shirt and elegant purple trench coat.”

“I’ve known John Wyatt since college and he has always been a wealth of knowledge about both music and film as a record collector and movie expert,” Lucas MacFadden, better known as DJ Cut Chemist, told THR. “Putting those two passions together 16 years ago as just another fun thing to do for a niche audience of friends and like minded peers has exploded into what I along with many others consider one of top 5 things about Los Angeles. It has been a joy to be included in the programming for the last seven years and I look forward to many more.”

Setting up a new event every week (and then striking it in one day afterwards) is a major production for the team.

“The lawn is just a patch of grass, a blank slate,” said Wyatt. “Every week we have to build everything and take it down in a day: a movie theatre with state-of-the-art picture and sound, concessions vending, bars, photo booth, bathrooms, decoration, lighting. It’s a big job every weekend and every piece has to work perfectly.”

That means a big staff: well over 100 employees for each screening.

“A lot of thought, time, creativity and attention to detail go into those photo booths,” Tanya Slater, producer for Cinespia, said. “Many hours are spent shopping and scouring LA’s amazing prop houses to find just the right pieces to create a unique and memorable experience and that make a great-looking photograph that captures the essence of the movie and the evening.”

“The best part of working these screenings is the ability to be there every week, to be a moving part of this memory that thousands of people are creating together,” Chris Wood, front gate manager for Cinespia, explained.

Wood joined Cinespia in 2009, as a staff member working the front gate and by the next summer was in a management position of the team. He’s been on the team ever since, something common at Cinespia. “So many staff members come back year after year because they don’t want to spend Saturday nights anywhere else,” he said.

“Some of our workers have been with Cinespia for 13 years. Their experience goes a long way in creating a smooth event for over 100,000 patrons a year,” Wyatt noted. 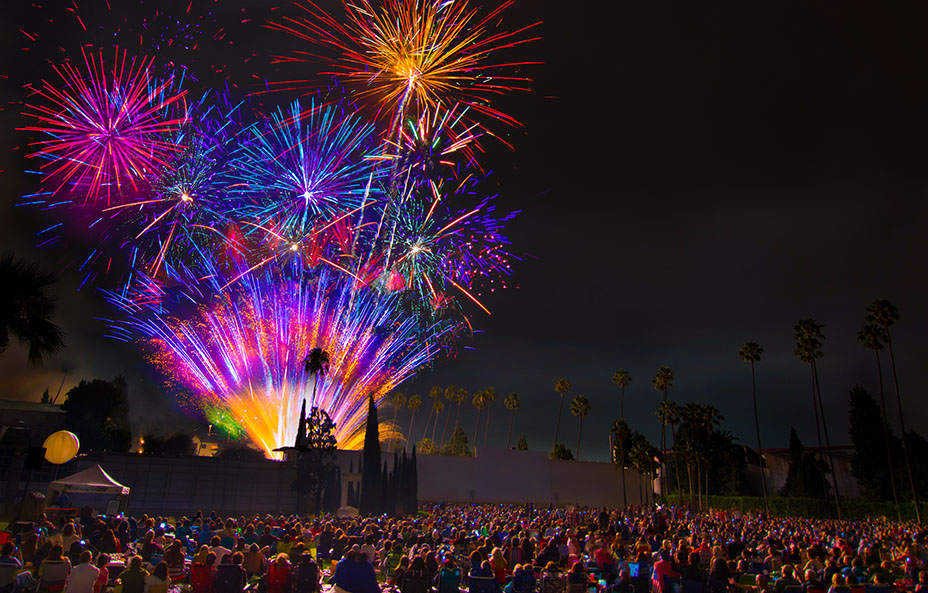 The events not only entertain the throngs of crowds that flock to each screening, but also reunite castmembers, breathe new life or even help stars accept films from their past they may not have embraced upon their initial release.

“Getting Elizabeth Berkeley for Showgirls was very exciting,” Wyatt said of the star’s appearance before a 2015 screening of the critically panned but cult favorite 1995 film. “She hadn’t appeared with the film ever, and our sold-out screening was key in making her change her feelings about the movie. Thousands of fans were there to watch it, validating all her hard work, and she got to claim her status as a cult hero.”

Berkeley’s moment is hardly an isolated incident, as over the years Cinespia has hosted dozens of memorable reunions and shocking revelations from the stars and creators of the films showcased. Just last year, Lorraine Bracco surprised a crowd gathered to watch Martin Scorsese’s 1990 gangster flick, Goodfellas, and revealed that this would be the first time she had watched the classic film in full. This year saw Milla Jovovich, Chris Tucker and director Luc Besson reuniting for the 20th anniversary of the sci-fi cult classic, The Fifth Element, and also star Alicia Silverstone making an unexpected appearance to introduce her 1995 hit Clueless.

“We try to choose films that will engage the audience, take them on a ride and immerse them in a story,” Wyatt said.

Still, there are certain films that elude Wyatt and his team, despite Cinespia’s status as a Hollywood staple. “There are many films we can’t screen because permission has been withheld,” said Wyatt. “For me, personally, I would love to do the original Star Wars trilogy under the stars. I think it would be a fantastic night, and a real celebration. We ask every year but have yet to get the green light to show the films.”

“It can be frustrating as we think the Cinespia treatment brings new life and relevance to studio’s libraries, but some don’t see it that way,” Wyatt continued.

Despite the holdouts, the outdoor film series’ success has been greatly beneficial for Hollywood Forever. “It’s been a wonderful marriage,” Hollywood Forever president and co-owner Tyler Cassity said. “In the first years of the partnership, Cinespia revenues gave us much needed money for our summer water bill.”

For Wyatt, the biggest takeaway is sharing the films he loves with a large audience and creating a summer tradition for a new generation. “To be honest, the whole thing has been like a beautiful dream,” Wyatt said. “To share the movies I love, to provide something meaningful to the people of the city where I was born and raised and to add a new chapter in Hollywood history has been nothing short of an honor.  Everyday I’m grateful.” 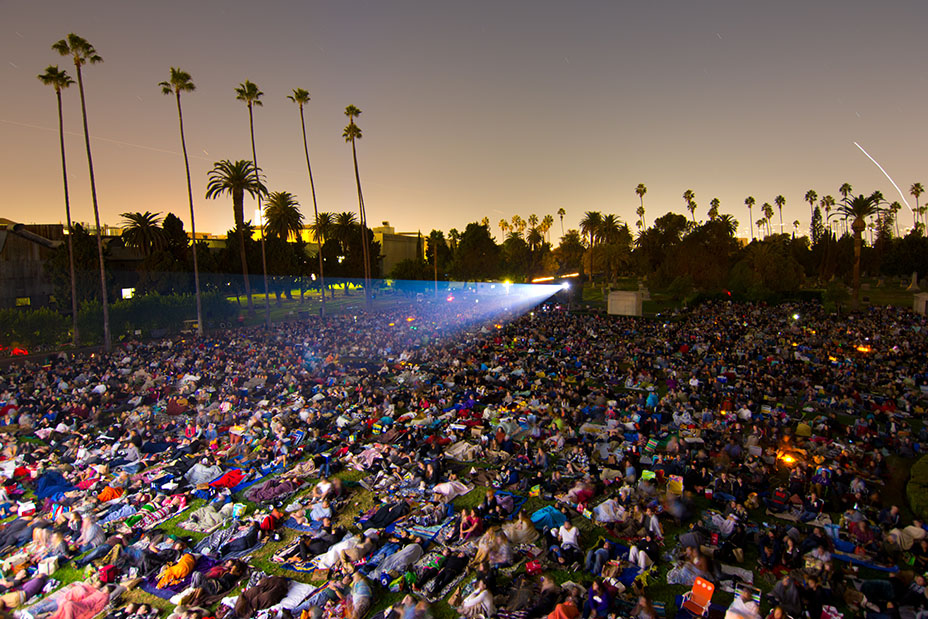