Evan Solano was only a few months into his first journalism job the November that L.A. Weekly‘s new owners abruptly fired the majority of the paper’s staffers in an event that cheekily came to be known on Twitter as “The Red Wedding.” The outlook for print journalists in Los Angeles was poorer than usual that fall — Solano’s employer, The Southern California News Group, had just announced a buyout plan, local news publication LAist shut down and tensions between Los Angeles Times‘ newsroom and its then-owners made national headlines — but the Weekly news especially devastated the Inland Empire native and page designer. Solano had picked up the alternative weekly for years at Rhino Records in Claremont and followed Weekly writers like music columnist Jeff Weiss and former food editor Sarah Bennett on Twitter. “I just really felt heartbroken,” he says. “The one thing I wanted to do was to write for the L.A. Weekly one day. And I realized that may never happen.”

From afar, however, Solano watched as a resistance movement to the Weekly‘s new direction emerged: First, angry staffers from different eras of the magazine, unaffiliated freelance writers and concerned community members (including Wrinkle in Time helmer Ava DuVernay) began using the #BoycottLAWeekly hashtag. In December, a group staged a “funeral” for the Weekly outside its Culver City offices, complete with an open casket, and live-streamed the protest on the Weekly‘s own Facebook page. That same month, the boycotters launched a campaign to persuade advertisers to leave the Weekly; the publication’s “Sips & Sweets” event was canceled after sponsors and vendors pulled out. When the boycotters heard that the new Weekly was planning on reviving the paper’s annual “People” issue, they plotted a competing “The People’s Issue.” But by the early spring of 2018, after Solano began attending Boycott L.A. Weekly meetings, another idea emerged: Instead of emulating the old Weekly, why couldn’t the protestors channel their energies into creating a new, different magazine?

The resulting publication, The LAnd, was released last weekend and designed by Solano. One hundred and forty-four pages, in color, and free, the physical publication is available at businesses around L.A., while stories began rolling out online in late January. Its motto, emblazoned on its cover, is “by locals, for locals”: Stories highlight both well-known (Roy Choi, Circus Books) and more obscure (Melina Abdullah, General Jeff, Ron Mitchell) Angelenos and L.A. icons. Though The LAnd comes from a group with extensive journalism experience, few knew how to put together a print magazine before last August, and the publication’s journey from an errant idea to stacks at record stores and coffee shops was one of stops and starts. “It’s like burning your hand on the stove,” Solano says of the six-month process. “You’re going to learn.” 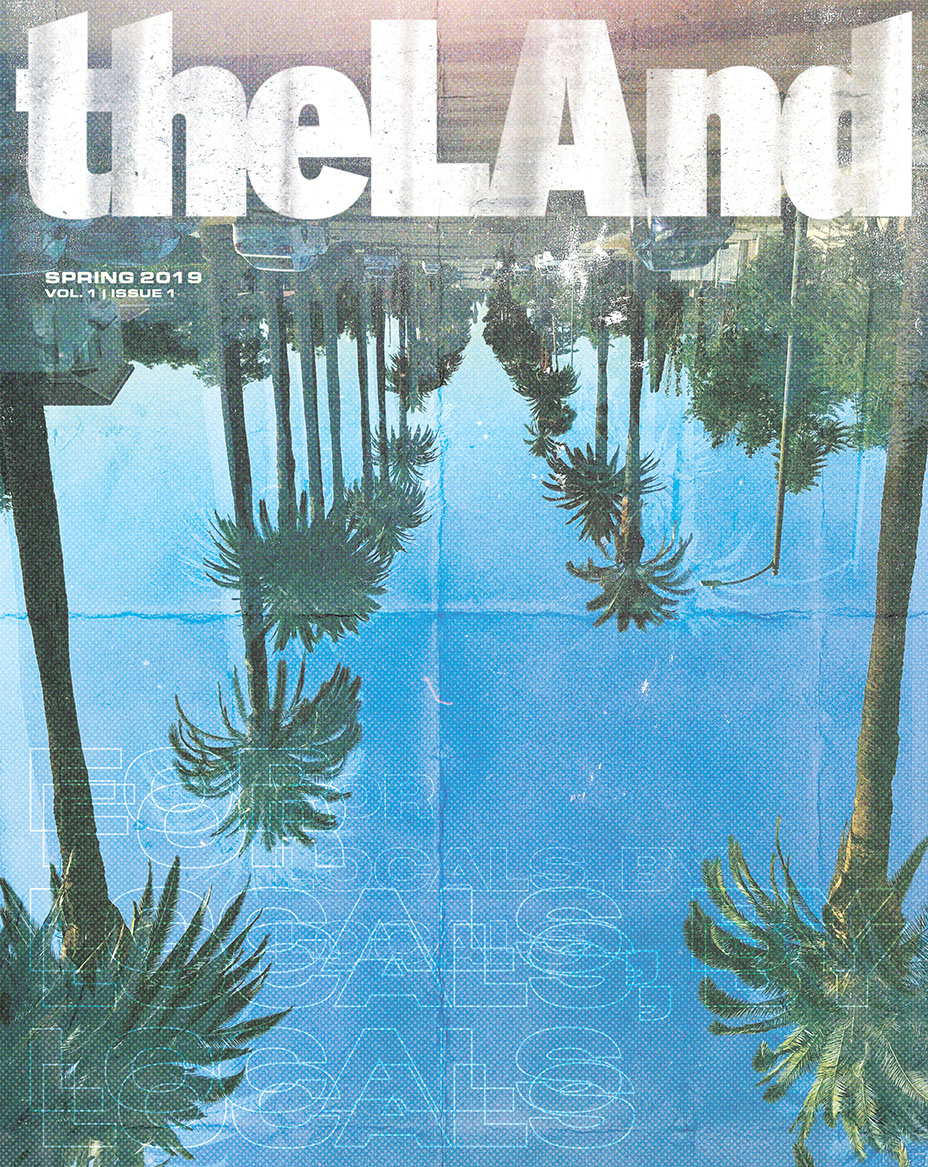 Though the Boycott L.A. Weekly group first began brainstorming a new publication in the spring of 2018, The LAnd‘s core group of editors coalesced by August. From an original protest group of about 50 people, “a more ride-or-die contingent emerged,” Weiss says, that soon transformed into a masthead: Weiss and former Weekly staffer Jennifer Swann became co-editors-in-chief, Bennett the managing editor, former Weekly writer Mark Ortega a senior writer, former Weekly staffer Liz Ohanesian a senior editor and Solano — the only member of the crew without a Weekly connection — the design director.

The “editorial collective,” as they called themselves, sent out a call for pitches. They wanted longform stories that at once captured a sense of Los Angeles in flux, embodied the “spirit” of an alt-weekly, Weiss says, and yet didn’t have an expiration date or specific time peg, given that The LAnd is currently a quarterly, not a weekly. “How do I take that old sense of liberation and freedom [from the Weekly] and apply it in the modern era, where you’re not just having young, white, angry writers?” Weiss says the group asked themselves.

The LAnd editors initially budgeted $20,000 to make the magazine and pay writers and photographers. That sum didn’t quite cut it — Weiss estimates that the final cost of printing and paying contributors will be $30,000, and editors could go unpaid. Still, the modest budget attracted investors: First, half that sum was put up by Epic Magazine, the Los Angeles-based longform nonfiction digital publication cofounded by Joshuah Bearman, a former Weekly editor and staff writer. His company invested in The LAnd “for the obvious reason [that] L.A. Weekly, among other alt-weeklies, and now even the successors of alt-weeklies, like Gawker or even The Awl, were the proving grounds for the next two generations of young writers,” Bearman says. Epic wanted “to make some modest effort to create a new venue for that sort of writing,” he adds.

Other funds were raised at a November house party/fundraiser at Ortega’s place with a $20 admission fee, with music and booze provided by local companies Angel City Brewery and Mulholland Distilling, the spirits brand cofounded by Justified star Walton Goggins and former cameraman Matthew Alper. L.A. native Alper heard of The LAnd through a creative agency he was working with. He began providing free spirits and offering Mulholland Distilling’s event space downtown to the publication after noticing that several of the stories it was planning involved people or places that he knew: “It’s a big city and there’s a lot going on in different places. The L.A. Weekly filled a bit of that, but it feels like now more than ever we need more of this,” he explains. Angel City Brewery was one of the brands that pulled its advertising from the Weekly after the Boycott L.A. Weekly campaign began. 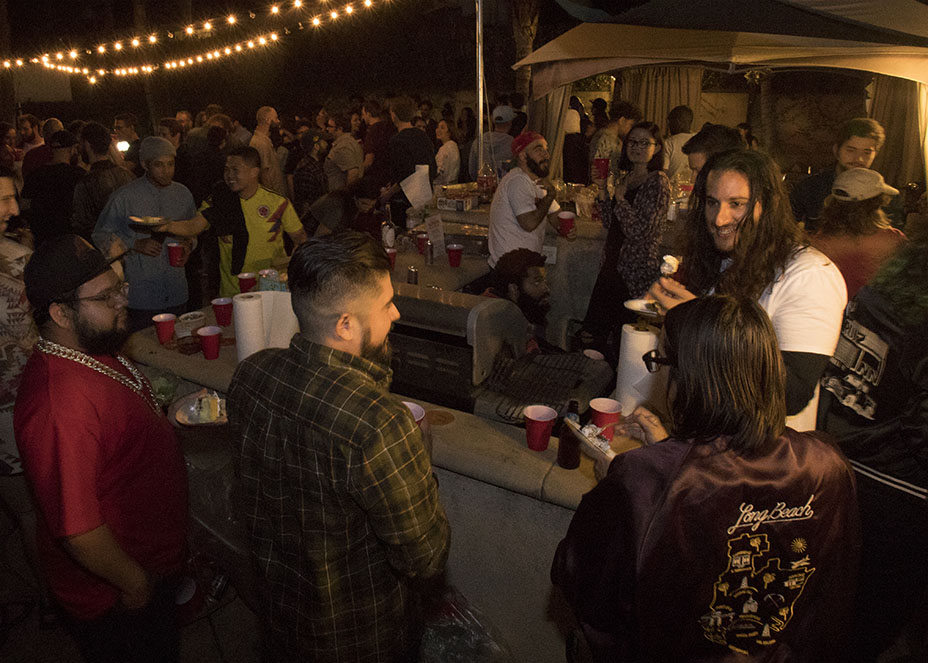 The contributors The LAnd publishes in its first issue are a mix of Weekly standbys, name-brand writers and local freelancers. Onetime Weekly editor Andy Hermann reached out to Henry Rollins, the former frontman of the California hardcore band Black Flag, a KCRW host and beloved former columnist at the Weekly, who agreed to contribute to each of The LAnd‘s issues. April Wolfe, the Weekly‘s former film critic, wrote a story on writer-director Nijla Mu’min’s film Jinn, while Molly Lambert, a former Grantland writer and New York Times Magazine contributor, wrote a piece on the Boyle Heights Mariachi Plaza rent strike.

Weiss himself wrote three stories while editing the bulk of the issue with Swann and selling ads, too. (No one in the group had ad-selling experience, so Weiss volunteered for the job.) Like most of The LAnd‘s collective, the magazine is a side hustle for the writer, who also publishes freelance stories and edits a blog called The Passion of the Weiss; he put a book project on hold for The LAnd. “It was just a nightmare,” Weiss says of the workload he took on with the magazine. “But it was the first issue, so I was like, how can we be legends without being the Fyre Fest people?”

The predominance of writers on staff posed some challenges for Solano, the sole designer in the group. Solano fought for space to let the stories “breathe” while others battled on behalf of several-thousand-word features, he says. As the only members of the collective with print experience, Solano and Bennett determined paper width, magazine size, types and the printer. The design is inspired by ’80s Los Angeles, which Solano considers to be the “heyday” of L.A., as well as Law & Order, bus ads, grindhouse movies and punk flyers. The size of the magazine is a hat tip to the deceased, beloved food magazine Lucky Peach, which shuttered in March 2017. 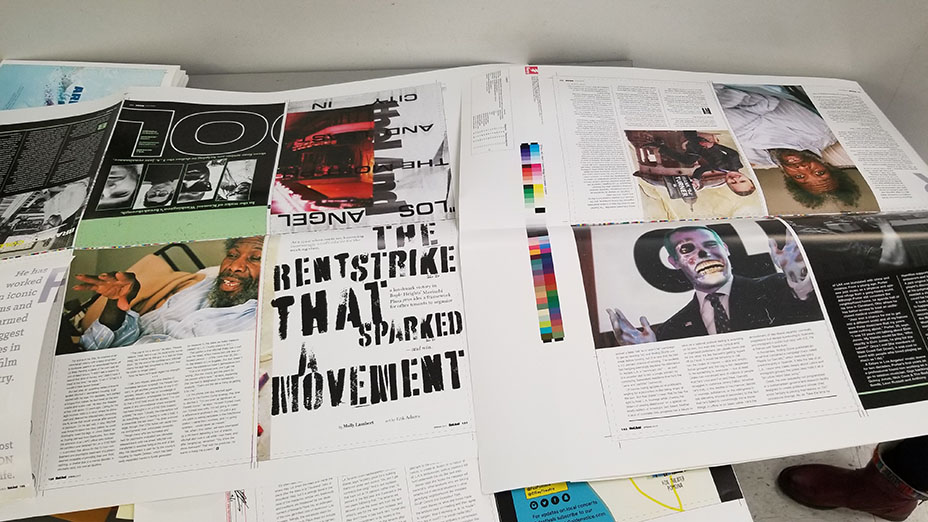 There were other growing pains, too: Because members are located all over the city and Solano is based in the Inland Empire, the collective communicates primarily via GChat. (The magazine now has a digital editor who is upgrading the crew to GSuite.) The editors commissioned more stories than they could fit in the print magazine and had to determine which would be online exclusives. And editors had to get to know the business side of magazine making fast: Solano bemusedly recalls seeing Weiss “freak out” about ad sizes as well as how to screen-print T-shirts. At one point The LAnd Twitter account told its over 5,000 followers that it believed that it was alone in liking The Terminal, the 2004 Steven Spielberg film starring Tom Hanks. (Ortega had accidentally tweeted from the magazine’s account instead of his own.)

For his part, Solano believes the difficulties that The LAnd experienced in producing its inaugural issue helped “define” the magazine: He says his long journeys into L.A. on public transportation to meet other editors inspired some of the design, while Weiss argues that the group’s initial ignorance about print production strengthened the final product. “That’s how you end up being, in my opinion, original: You don’t even know what rules to break sometimes,” he says. “Ideally you’d want to know what rules to break and how to break them, but sometimes you just kind of put it out there and refine from there.”

The group is already plotting more issues — its goal is to publish two more by the end of 2019 — and hopes to organize readings and live podcasts in the future (an initial launch party and reading will be held at Mulholland Distilling on Feb. 12). The LAnd’s launch joins many promising developments in L.A. media, which looks less dire today than in 2017, when it first occurred to Solano he might never get a chance to work for the Weekly. Though an estimated 2,100 journalists have lost their jobs in recent weeks nationwide, in L.A. last year Patrick Soon-Shiong bought the Los Angeles Times, returning the paper to local ownership; Pop-Up Magazine, which operates The California Sunday Magazine, was acquired by Laurene Powell Jobs’ The Emerson Collective; KPCC revived LAist and L.A. Taco relaunched to prioritize local news.

But Solano hopes that when people pick up The LAnd at Amoeba Records, The Dresden, The New Beverly and other destinations in weeks to come, they’ll recognize his publication’s distinctive spirit. “There are magazines that are doing amazing things here, but I want people to feel that this scrappy, young publication is actually doing something that is aesthetically beautiful and is demanding attention,” Solano says. “I want it to be loud, and I want people to take away this feeling that it’s beautiful and it’s made right here in L.A. And to see the care and the attention and the love that’s in the details.” 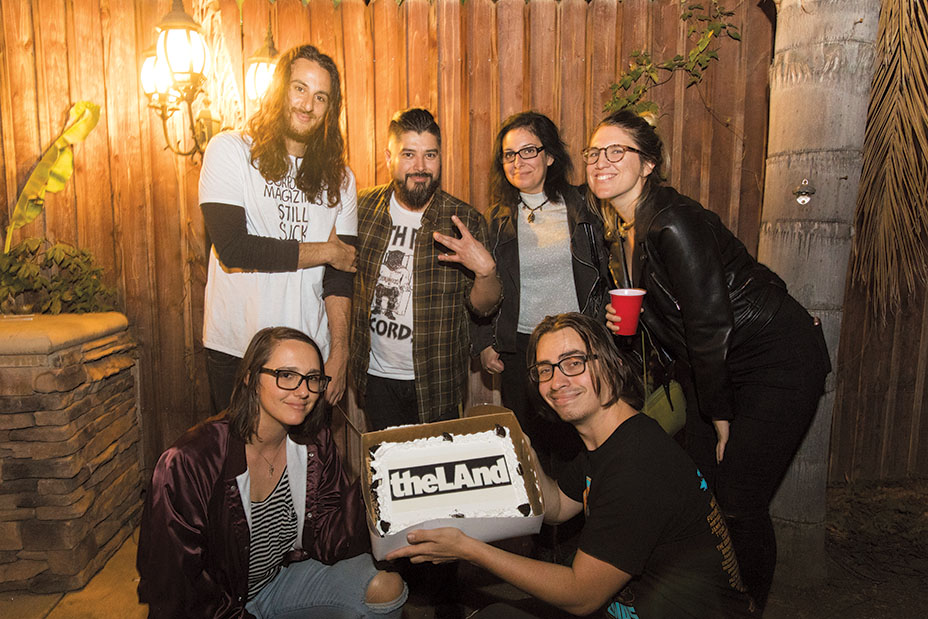