“We have made the decision to temporarily close, effective March 13, 2020,” reads a sign taped to the door of TMZ Celebrity Tours’ Hollywood Boulevard headquarters. Nearly nine months later, one of the city’s premier tour bus companies remains shut, having missed out on a typically lucrative summer tourist season amid the novel coronavirus pandemic. TMZ is not alone, as Guideline Tours, Ultimate Hollywood Tours and Access Hollywood Tours (which reopened Oct. 29) also have been shuttered for most of the year.

The handful of tour companies that have returned face a new world, now bringing in just 5 to 6 percent of the revenue they saw at the same time last year. StarLine Tours — one of Los Angeles’ biggest tour groups — restarted its stars’ homes tour and hop-on, hop-off double-decker bus Sept. 1, both in open-air vehicles.

“You’re looking at trying to grow the business from zero once again, having been closed for so many months,” says StarLine chairman Kami Farhadi. The company has added private tours that pick guests up at homes or hotels and can be customized. 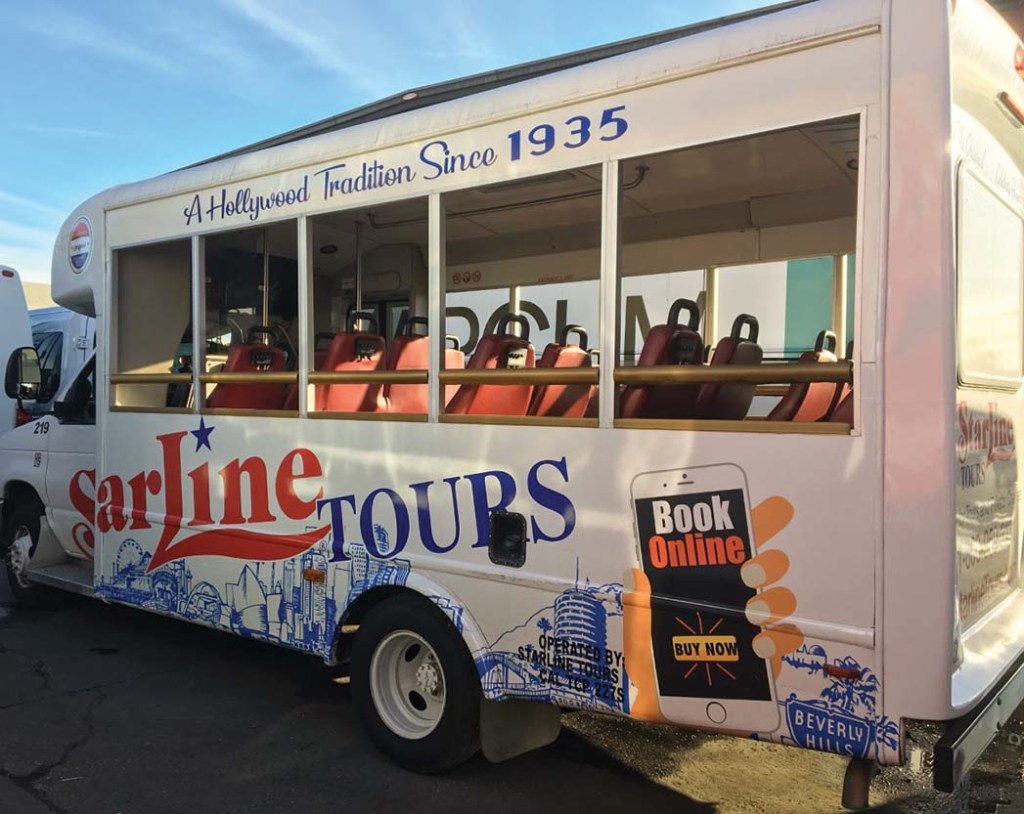 StarLine also has started renting out its roofless buses to the studios, at a time when being outdoors can be key to virus safety. Productions are using the vehicles to transport talent, crew and equipment from location to location, in place of the traditional (and tightly enclosed) sprinter vans and private cars.

Fellow tour bus line Big Bus also has been renting its fleet to studios (whose available open-air vehicles tend to be golf carts). GM Rich Goldstein adds that Big Bus has seen a boost in locals taking day trips, with an “increased percent of business coming from same-day impulse, whereas historically there were much higher rates of pre-booking,” says Goldstein.

Farhadi says Los Angeles residents also have accounted for much of StarLine’s business since reopening: “People are saying, ‘There’s not much else to do, let’s try one.’ ”

For a smaller company like A Day in LA Tours, which uses enclosed buses, the lack of international tourism has been “a huge blow” since reopening in mid-September, says CEO Raman Rampal. And while all currently operating companies enforce mask wearing, vehicle sanitizing and distancing from the guide, “there tend to be people coming on tours who don’t believe in the virus, who think it’s a Democratic hoax,” says Rampal. “It gets tricky because we have to cater to people regardless of their beliefs.”

And while tour operators are optimistic that the industry will bounce back, Rampal sees the current struggles as the new normal until there is a widely dispersed vaccine.

“I’ve talked to some people who are coming to Los Angeles, and they’re asking me, ‘Is it safe to stay in a hotel?’ ” says Rampal. “If people aren’t even comfortable staying in a hotel, how can we expect them to be comfortable going on a public tour instead of just renting a car and figuring it out themselves?”

This story first appeared in the Dec. 9 issue of The Hollywood Reporter magazine. Click here to subscribe.