When The Soloist was released in 2009, the film, which starred Robert Downey Jr. and Jamie Foxx, shined a much-needed spotlight on the intertwined issues of homelessness and mental health in Los Angeles. What no one could have predicted back then, including the movie’s producer Gary Foster, is that nine years later, those challenges would crest into a full-blown humanitarian crisis.

Now Foster and other Hollywood activists — including Diane Keaton and Grey’s Anatomy‘s Greg Germann, all supporters of social service agency The People Concern (TPC) — are celebrating a milestone: Starting Nov. 1, 32 formerly homeless people will move into the first privately funded supportive housing facility forged from a partnership between TPC and for-profit developer FlyawayHomes.

With L.A.’s homeless population hovering around 60,000, housing a few dozen may seem trivial. But the $3.6 million project, built from shipping containers on Colden Avenue in South L.A., could provide a road map for a long-term solution. “The time is now to stop talking about building housing and to start building housing,” says Foster. As one of 61 equity holders in the project, he can expect about a 5 percent return on his investment. By relying solely on private funding, the construction process avoids some requirements that can send costs soaring — most notably, the need to pay a prevailing wage. According to TPC, the project was built at a quarter of the price and in a quarter of the time it would take for an equivalent structure built with public funds. “These guys are like, ‘Let’s go, let’s do this — we can build it in a year,’ ” says Foster. “It just made sense to me.”

Residents will pay rent, much of which will be drawn from their Social Security disability, aided by a sizable contribution from the L.A. County Department of Health Services. Case managers will be on site every day to provide counseling, addiction treatment and access to health and employment resources. It’s these “wrap-around” services that have inspired Germann to devote the past two decades to the agency (TPC was formed in 2016 by the merger of Ocean Park Community Center and Lamp Community). “Homelessness is the face of this problem, but it’s really about poverty, unemployment, mental illness and domestic violence,” says Germann. “There is such a broad spectrum of what can hobble any community, so you have to approach this systematically and holistically and not look at these issues as being siloed.” 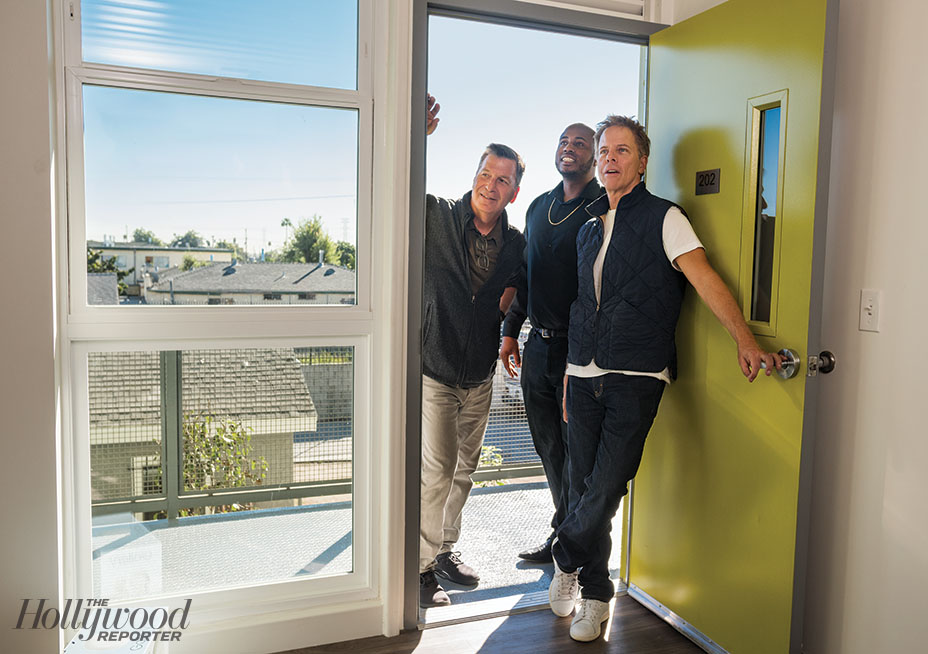 Ten percent of the chronically homeless population is considered “high acuity,” according to TPC’s John Maceri, but that segment uses up nearly 50 percent of public resources like emergency room visits, repeated stays at in-patient facilities, shelters and correctional facilities. The organization focuses on the labor-intensive needs of this high-acuity group to help free up those resources for the rest of the homeless population. “This is one of the biggest opportunities that L.A. has to offer in terms of helping the homeless,” says Jhakil Doyle, who’ll be the new facility’s on-site manager. Doyle, 27, spent two years as a child in a county-funded transitional housing facility with his single mother. “Now, hopefully, I’m able to provide some help,” he says.

FlyawayHomes’ debut comes at a particularly raw moment as frustration mounts over the slow rollout of funds from 2016’s $1.2 billion HHH ballot measure in L.A. Mayor Eric Garcetti recently faced a four-hour barrage of criticism from Venice Beach residents over his plan to open a bridge housing facility there. FlyawayHomes’ next project (at 88th Street and Vermont Avenue) is financed and set to break ground, and the long-range plan is to build 450 sites, housing 20,000, by 2028 (in time for the Olympics). “People say this is such a huge, intractable problem and they don’t know what to do,” says Maceri. “We want to help create a different paradigm — a different model. The conversation is shifting because people see a way forward.”

A version of this story first appeared in the Oct. 31 issue of The Hollywood Reporter magazine. To receive the magazine, click here to subscribe.