When Markus Persson beat out Jay Z and Beyonce in 2015 to nab the massive spec home at 1181 North Hillcrest Road with a winning bid of $70 million, the Swedish programmer could not have known that he was ushering in a new era for Los Angeles’ luxury real estate market.

Not only was the Minecraft home — as it came to be known, named after the gaming company that Persson had just sold to Microsoft for $2.5 billion — a record sale that defied all expectations, but it also created a new template whereby the traditional rules that had long governed L.A. real estate were upended.

“That really was the perfect storm,” says Coldwell Banker’s Joyce Rey, who has been a top-performing broker in the L.A. market for a decade. Rey notes that Persson bore the hallmarks of a new kind of buyer: a newly minted billionaire, single and eager for a turnkey trophy home that blends glamour and the kind of eye-popping amenities you might find in Wayne Manor.

“Most people did not think it would sell at that number,” says Rey. “And that created a new number that other houses would then have to reach. It is not easy, constantly chasing a new record.”

Three years later, nearly a dozen other L.A. real estate records have been shattered, and more will certainly be broken before 2017 is over. In 2016, two homes breached the once unthinkable $100 million mark — Hugh Hefner’s Playboy Mansion and a 10-bedroom, 20-bathroom home at 301 Carolwood Drive that was built on Barbra Streisand’s former estate in Holmby Hills. 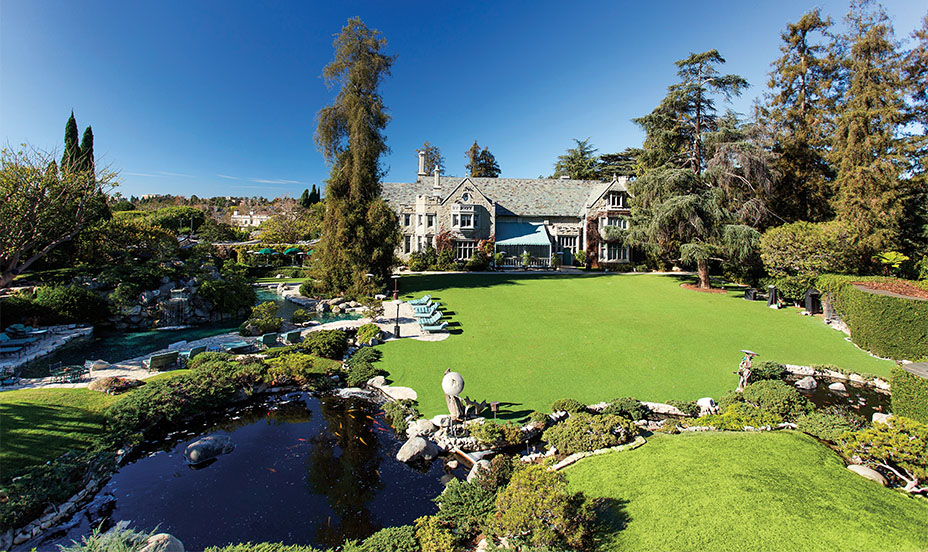 In January, Bruce Makowsky, the developer behind the Minecraft property, listed a $250 million home at 924 Bel Air Road that is the priciest house for sale in the United States. Jay Z and Beyonce, perhaps still stung by the Minecraft home, reportedly are circling a $125 million spec property on Cuesta Way. Meanwhile, up in Malibu, David Geffen recently sold his Carbon Beach compound for a record $85 million (reportedly to Dodgers co-owner Mark Walter), and another Malibu estate listed by Coldwell’s Sandro Dazzan is set to hit the market for $80 million at 23800 Malibu Crest Drive.

Real estate prices that 24 months ago would have been considered absurd — $100 million, $150 million, $500 million — are slowly being normalized, forcing brokers and developers to rethink not only sales and marketing strategies that target a tiny pool of billionaires, but also how to quantify value in a marketplace that appears to have no boundaries. “There is such an excess of wealth. It is something we have never seen before,” says Jeff Hyland, co-founder and president of Hilton & Hyland. 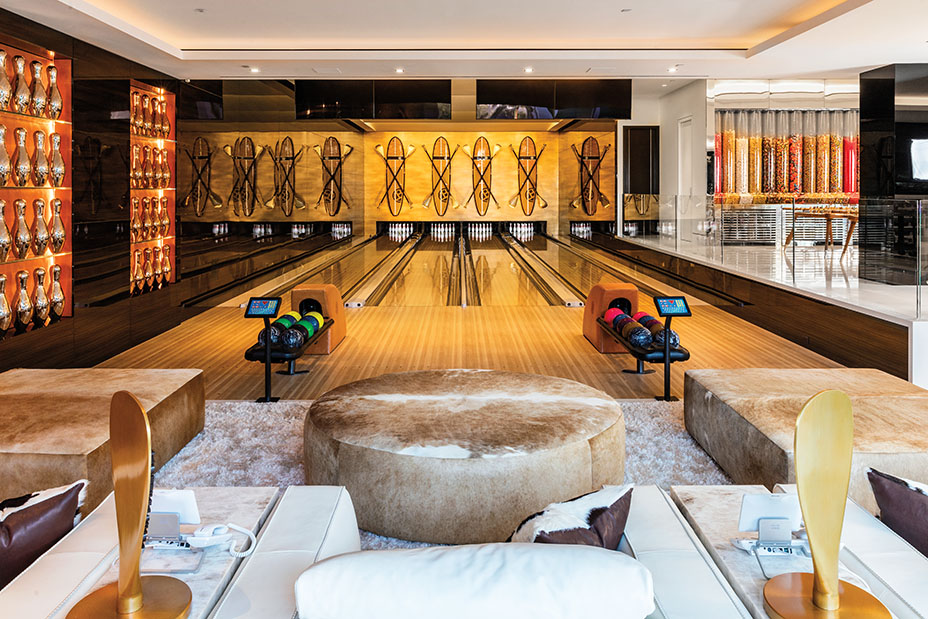 Brokers blame the “extreme price creep” on delusional sellers and mercenary brokers who take on listings with stratospheric prices to reap free media exposure. “Brokers will take listings at any price,” says one agent. “You’re seeing a lot of stuff that doesn’t help the market.”

Consider the pricing process. Traditionally, listing prices are based on square footage, plus an assessment of views, location and amenities and, most important, by comparisons — or “comps” — with similar homes sold in the area. The process strives for a semblance of empiricism. But with record sales occurring almost monthly, comps no longer provide the same guidance. The dynamics are even hazier at the upper end — “We’re not talking about a condo on the Wilshire Corridor that has a clear, defined value,” says The Agency founder and CEO Mauricio Umansky.

Hyland now has a client ready to spend $40 million on a parcel of land — or “dirt,” as he calls it — in Bel Air. He has another off-market listing for $165 million (the address of which he declines to provide) and plans to relist the 157-acre property above Beverly Hills known as The Vineyard for around $700 million later this summer (it was marketed for $1 billion in 2015). “It’s a ball that’s moving so fast, we don’t have time to reflect on it,” he says. “I just know that right now in L.A., we are in the hottest residential real estate market in the world.”

The astrophysics guiding the pricing of merely superexpensive homes do not apply to those north of $50 million. Below that threshold, finding the equilibrium of a listing price to actual market value is key. Priced too high, a house can languish on the market for months, creating a stigma.

Over $50 million, there is less urgency, Hyland explains. Most sellers have the means to hold out for the right deep-pocketed buyer. Makowsky says he is prepared to wait years. “We are working hard to get to the people who can directly afford to buy,” he says, adding that he has received three offers for 924 Bel Air but is holding out for a better offer.

During that interim, some of these mansions often are used as spaces for luxury marketing events. Top brokerage houses regularly partner with brands such as Ferrari, Rolls-Royce and Moet Hennessy for product launches that help elevate the brand and generate buzz for the home.

Umansky, like most top brokers interviewed for this story, says buyers are interested in more than just purchasing a fabulous home — they want to buy into a “lifestyle.” This fanciful notion is where super spec developers like Makowsky and Nile Niami, a former movie producer who now develops homes for the likes of P. Diddy and the Winklevoss twins, come in. Makowsky’s record $250 million listing will be unseated when Niami’s $500 million 105,000-square-foot spec property at 944 Airole Way in Bel Air — unapologetically dubbed “The One” — hits the market in 2018. Niami and Makowsky are locked in a battle to imagine the most absurdly awesome amenities. Bugattis and Rolls-Royces? It’s been done. Twenty-foot flat screens? Yup. Original works by the artist Damien Hirst? Done. 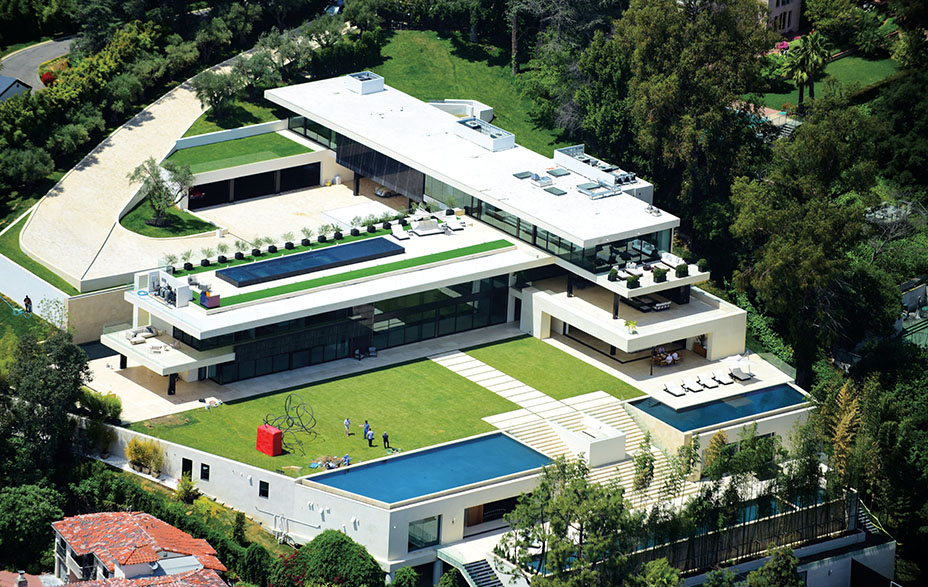 “With properties that are extremely unique, you are no longer just pricing real estate. You are pricing the entire package,” says Umansky, who recently experimented with a listing on Sweetwater Mesa Road in Malibu without setting a price. He just met with prospective clients and asked them what they thought the property was worth. “These types of buyers are not sure what they want until they see it,” he says.

That philosophy has led to some extremely erratic pricing. The Playboy Mansion, first listed at $200 million, sold for half that. Similarly, 301 Carolwood, listed at $150 million, sold for $100 million. In 2011, the daughter of Formula One billionaire Bernie Ecclestone, Petra Ecclestone, bought the 56,500-square-foot Spelling Mansion in Holmby Hills for $85 million. Five years later and after a sizable remodel, she has relisted it at $200 million.

Globally, there are only around 2,000 billionaires, and the race is on to grab their attention. Some real estate agents, like Rey and Hyland, believe in the measured, old-school strategy of leveraging existing personal relationships. Others opt for shock and awe. A Cleopatra-themed marketing video for Niami’s $100 million spec home on Hillcrest in Beverly Hills, called Opus, featured naked women and was the object of social media derision when it was released in May. The video has over 1 million views on YouTube and Vimeo combined and, according to producer Alexander Ali, caught the eye of at least one local billionaire: Elon Musk.