Lenny Kravitz received a commission to design his first Los Angeles residence in the most Hollywood of ways: during a car chase. The multihyphenate (Grammy-winning rocker, hit producer of artists like Madonna, Hunger Games star and 2015 Super Bowl halftime performer with Katy Perry) was on Santa Monica Boulevard in Beverly Hills when a BMW M5 started barrelling after him. The driver “made all kinds of maneuvers to get to me and had his head through the passenger window trying to speak to me while driving,” recalls Kravitz, 52, shaking his head in disbelief.

In pursuit was top real estate agent Branden Williams, who — in the process of launching a real estate development firm — had been researching the musician’s design work the night before. “I was heading down Crescent Drive and saw a profile of this really cool-looking black dude with dreadlocks in a Mercedes,” says Williams. “I went, ‘Holy shit, I’ve got to talk to him!” 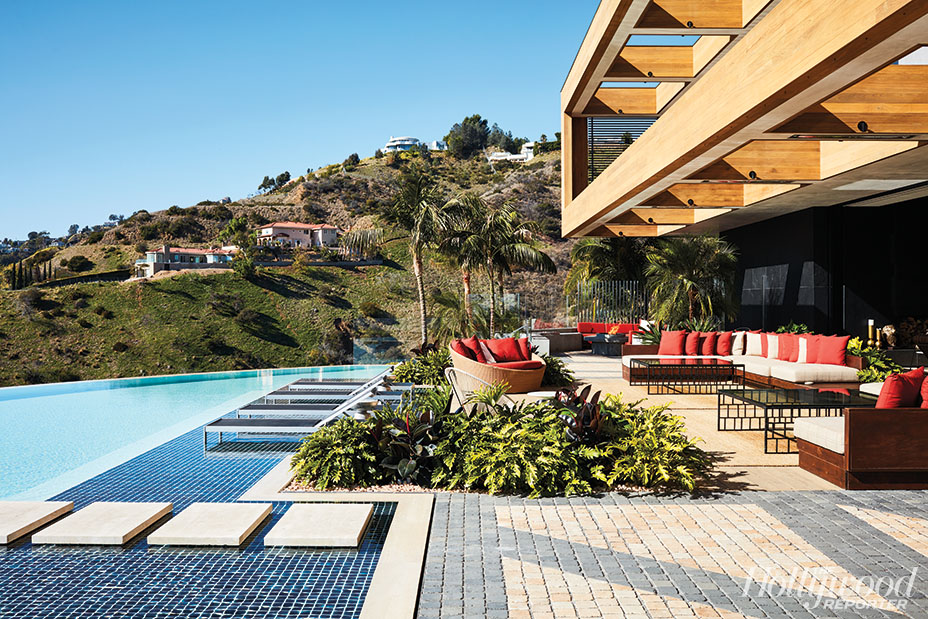 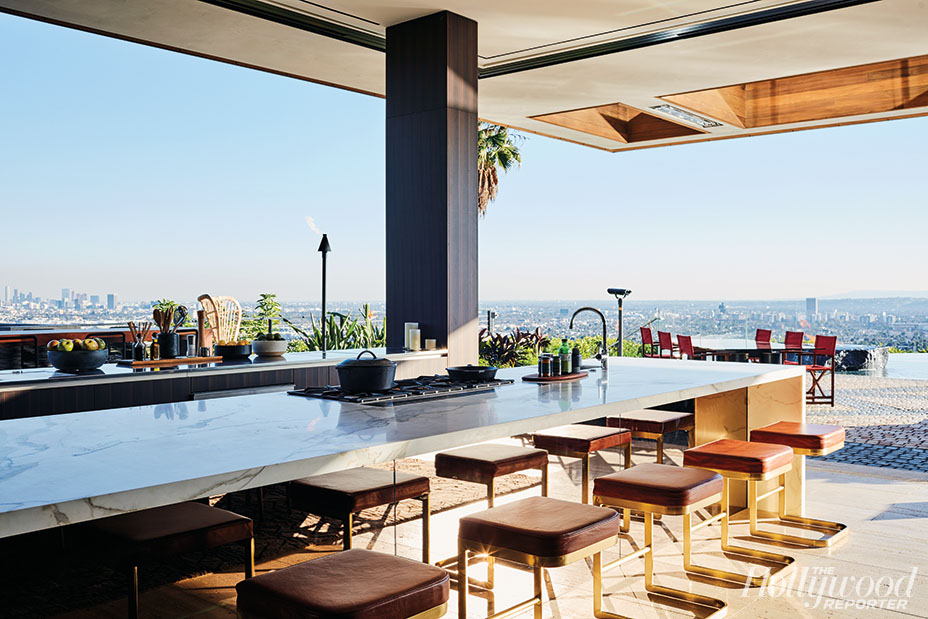 Williams finally got Kravitz to pull over and listen to his proposal — to design the interiors of a house he was building in Hollywood — and the end results of the only-in-L.A. encounter are dazzling. Above the Sunset Strip, not far from where Kravitz performed such hits as “It Ain’t Over Till It’s Over” and “Fly Away” at the Viper Room during the 1990s, sits the Stanley House, a 10,500-square-foot residence. The five-bedroom, seven-bathroom home — which Williams developed with his business partners, including wife Rayni, Matt Lyons of Lyons Development and Jason Somers of Crest Real Estate — comes with a price tag of $38 million and, unsurprisingly, some serious leather-pants swagger. The Stanley House exterior — designed in midcentury modern style by L.A.-based architectural firm XTEN Architects — sits atop a private promontory above a steep, winding drive and is surrounded by a Hawaiian lava-rock waterfall, tropical landscaping, an infinity pool and a breathtaking 280-degree view.

Once inside, however, it’s all Lenny. Like his music, which Rolling Stone has described as “anachronistic, soul-inflected, ‘60s-style rock for the ‘90s” (Kravitz has sold about 40 million albums worldwide), the interiors are a mashup of sleek modernist, midcentury and 1970s funk influences. “There are so many things, pieces and designers that have given me energy,” says Kravitz. “It’s just like music — Miles Davis, Jimi Hendrix, Led Zeppelin. There’s always something you get from these great artists. It’s the same thing.” 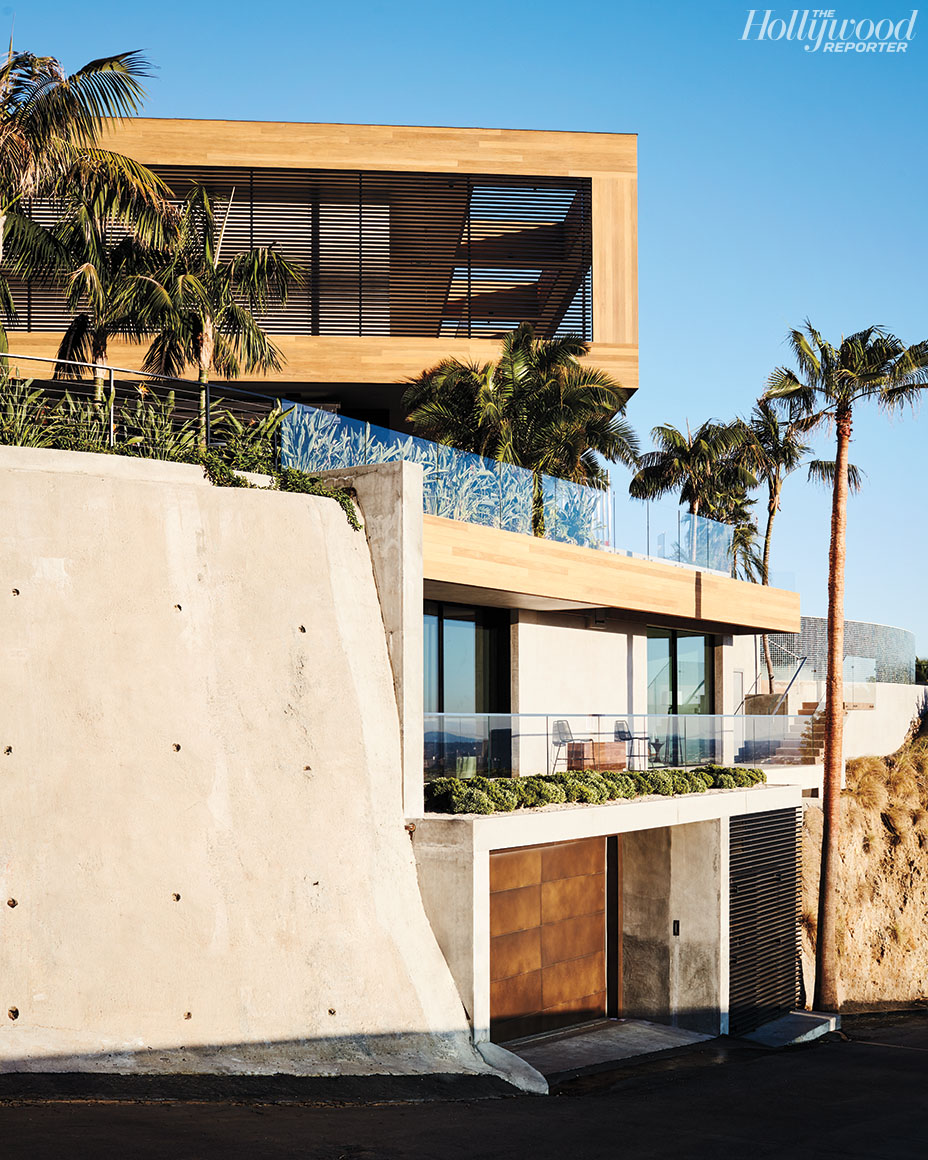 Oscar-nominated costume designer and stylist Arianne Phillips — whose friendship with Kravitz dates back to the 1980s, when they were both living in New York City’s SoHo neighborhood — says Kravitz’s design passion always has been evident. “Lenny has a deep appreciation for 20th century and midcentury architecture but has also been influenced by futurism, which makes his work modern,” she says. “He is definitely rooted in the design of the ‘60s and the ‘70s but has a very forward sensibility.” Kravitz’s Stanley House is reminiscent of iconic architect John Lautner’s geometric-glam Sheats-Goldstein residence — only with heated floors, a fingerprint I.D. security system and nearly $2 million in Vitrocsa’s retractable, seamless glass doors.

“The whole first floor connects with the kitchen and living room. The way it opens up, it doesn’t feel like you’re getting disconnected,” says Kravitz. His stamp is most visible in a sultry downstairs bar/entertainment room that features a rich suede sectional. As in any good rock lair, the plush seating areas are accentuated with strong, masculine colors — gold, bronze and tangerine. 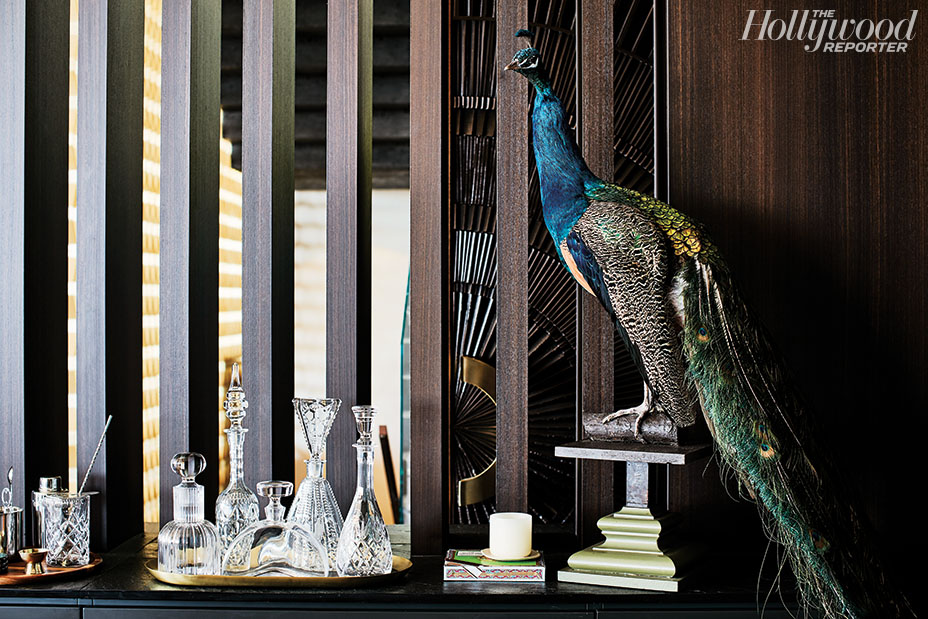 Fire and water features as well as lavish finishes populate the house, with colosseum travertine floors, white marble kitchen countertops, dark oak paneling in the study and leathered travertine in the showers. At the top of the floating staircase are several bedrooms, including the master suite with floor-to-ceiling retractable windows. 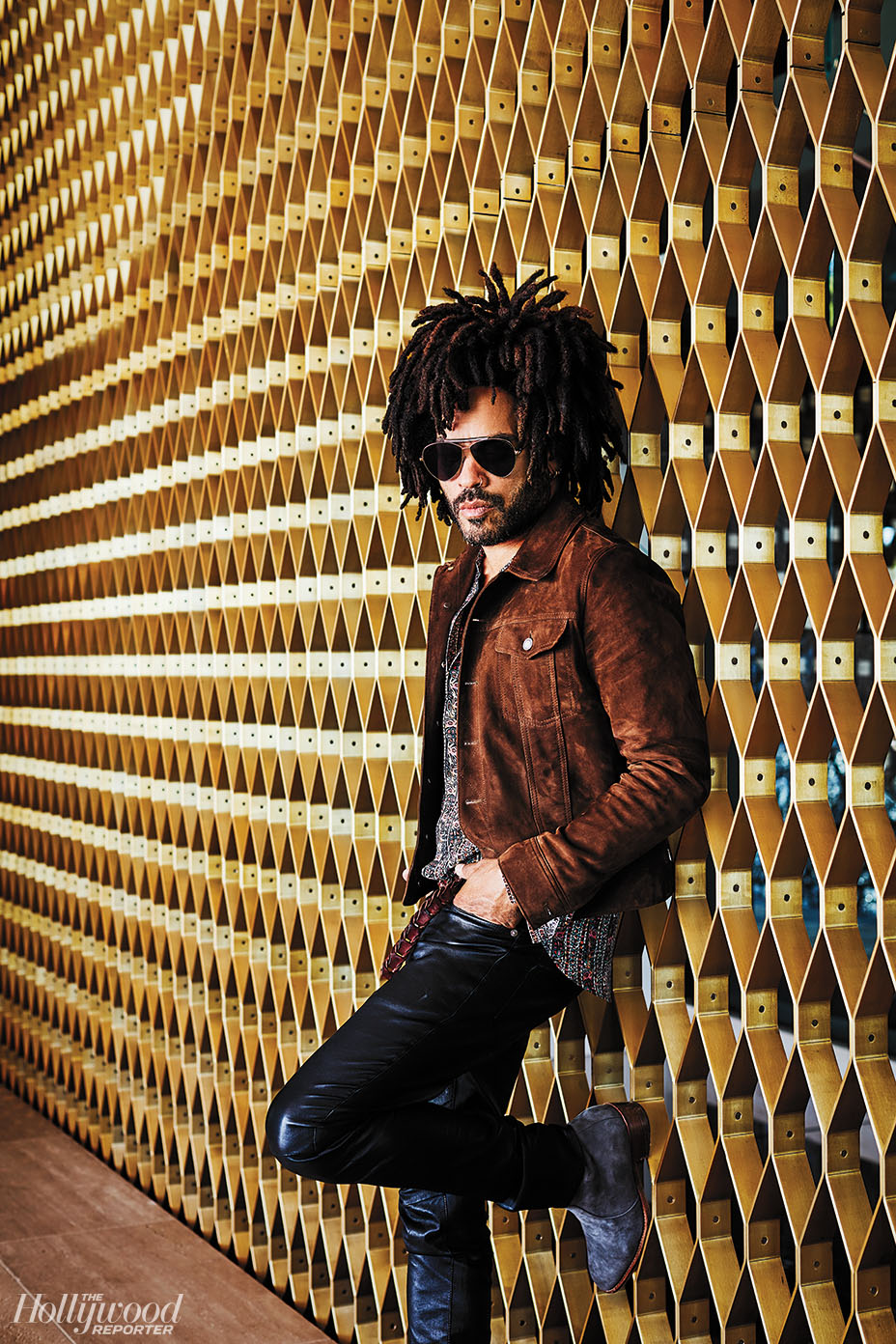 Though Stanley House may be his first project in L.A., Kravitz hardly needs an introduction to the city. As an 11-year old, he moved from New York to SoCal after his mother, actress Roxie Roker, landed a role on the CBS sitcom The Jeffersons, which ran from 1975 to 1985. His parents, including his television producer father Sy Kravitz, bought a house in Baldwin Hills, located in south L.A.’s Crenshaw district. “Once my mom started making some bread, we bought our first house, a midcentury modern, glass-sided, beautiful ranch house,” recalls Kravitz. “It was the first time I’d ever seen anything like that other than on television. That was my first big impression of Los Angeles and where I learned so much about interiors and architecture.”

Kravitz, who is the father of Zoe Kravitz — the 29-year-old star of the much-awarded HBO series Big Little Lies — with actress Lisa Bonet, credits his parents with being his first role models of style: “They expressed themselves through their fashion, through their apartments, through the way they lived,” he says. 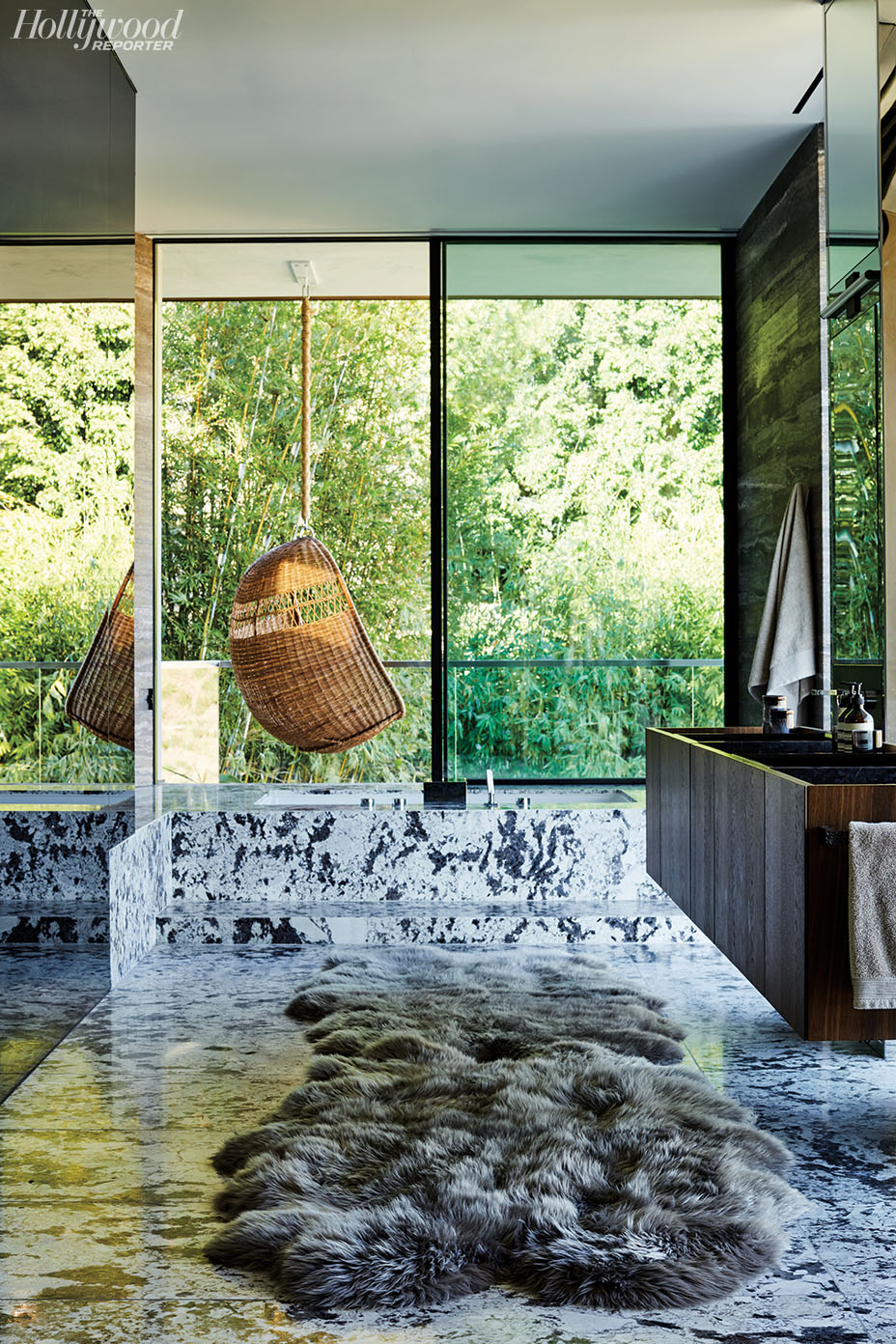 Kravitz attended Beverly Hills High School, which also exposed him to architectural gems lived in by his affluent classmates. Homes designed by Paul Williams, Lautner and Brazilian architect Oscar Niemeyer all made impressions, but he credits Venice Beach-based designer Lenny Steinberg, whose look embraces massive organic pieces and angular lines, with having an oversized impact. “To this day, her influence is still in me very deeply,” he says.

Such design adulation led to an “obsession” that had Kravitz in adulthood buying, designing and flipping multiple houses. (He currently owns homes in the Bahamas, Paris and Brazil and has previously owned in New Orleans, Miami and New York.) “I began to get places, do them up and sell them, and finally I realized, ‘I can’t keep doing this — it’s becoming a sickness,’ ” he says. “So I started a company and decided to do it for other people. That’s how it started. 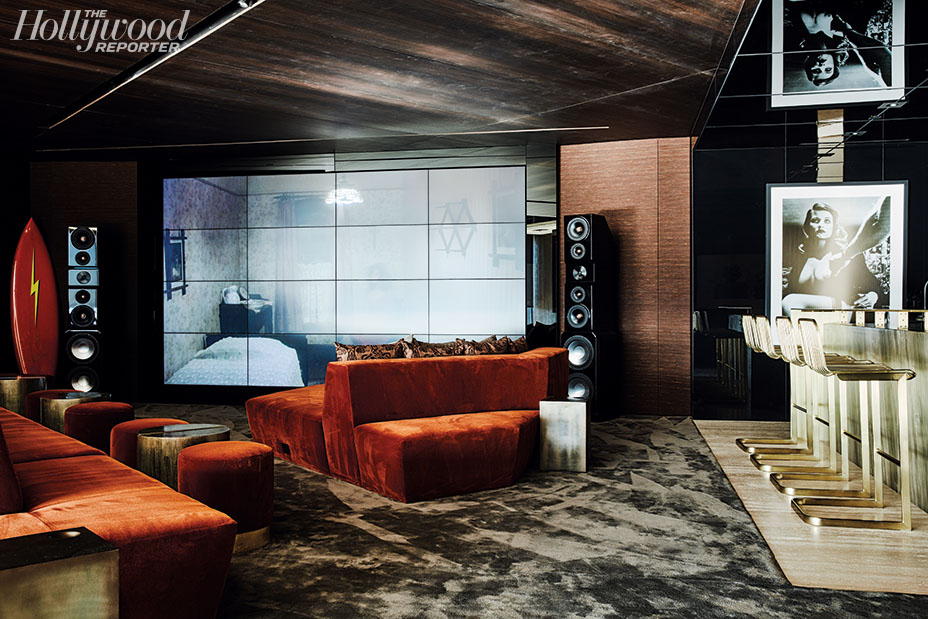 After launching his firm in 2003, Kravitz got a boost from French designer Philippe Starck, who commissioned a reinterpretation of his popular Mademoiselle chair, a mini-bench-like seat with Lucite legs. Design projects continued to roll in, from high-end luxury brands like Leica cameras and Les Artisans de Geneve (for whom Kravitz created a one-off Rolex timepiece), to a home collection for Crate & Barrel’s lower-priced chain CB2. Kravitz attributes his ease with both luxury and more affordable brands to a DIY spirit that was inculcated when he was in his 20s in Manhattan, where he would rehab furniture found on the streets. For CB2, Kravitz has been designing a 1970s-inspired furniture and decor line that includes tables, chairs, lamps, rugs and pillows. CB2 managing director Ryan Turf says the CB2 x Kravitz Design collection has been “extremely successful” since it launched in 2013.

With perhaps one of the most versatile CVs around, Kravitz, who is recording a new album set to drop this year, has redefined what a multihyphenate can accomplish. But to him, it’s all the same. “In music, all of those elements — a drum, keyboard, trumpet, a vocal — those are furnishings, those are walls, those are shapes. And you continue to build on that palette until you feel it’s complete,” he says, adding: “How do you know when there’s enough there? You know when it’s done because something tells you that it’s done. You feel the space.” 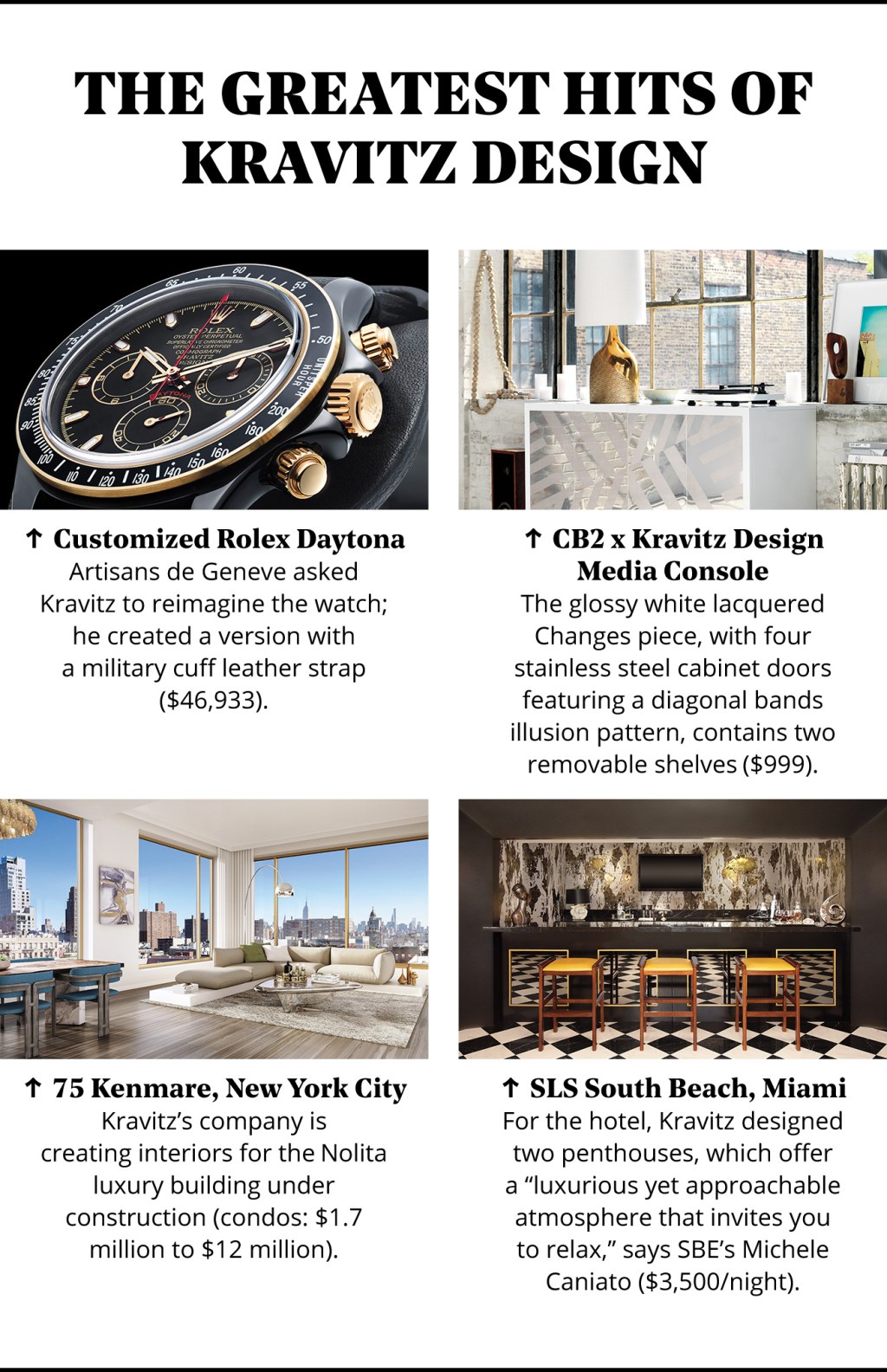