Nanci Ryder never asked, “Why me?” Not in front of me, at least, while my recorder blinked red. She must’ve privately wrestled with the question — anyone would have upon receiving an ALS diagnosis 14 years after beating breast cancer, a second threat, worse than the first, that would inevitably derail a vibrant life and enviable career.

There were questions, though, and she answered. It started with a rumor, as many exchanges between a journalist and a publicist do. In the fall of 2014, an editor heard she was leaving BWR Public Relations, the company she co-founded in 1987, and there was talk that it was perhaps due to issues with uncontrollable slurring and slowed speech. I still don’t know why I pretended to be so brave, but I called Nanci directly. I didn’t have a relationship with her, but, as an entertainment journalist, I knew enough about Nanci Ryder and the power she wielded — watching her command red carpets, the backstage press room at the Oscars while celebrating Renée Zellweger’s win, or hearing about her interactions with my editors — that if she were stepping down from a business she built from the ground up, there was no reporting around her.

She didn’t take my call, but I soon found myself on the line with her protege, Nicole Perna, who told me the truth was somehow more serious. The explanation would come from Nanci when she was ready to talk.

Weeks later, on Oct. 10, 2014, at 11:26 a.m., I got an email from Nanci that read, “We are ready to go with the story of me.” By 2 p.m., I was walking up her driveway and through a large window, I saw two women seated at a dining room table. Renée answered the door. She welcomed me inside and introduced me to Nanci, like a publicist would do for a client, but this time was different. For both of them.

Nanci had facilitated thousands of interviews over the years but had never sat for one herself. I’ll never forget how she raised an index finger to signal this would be the first and the reason was to reveal that she had been diagnosed with amyotrophic lateral sclerosis, a progressive and fatal neurodegenerative disease that affects the nerve cells in the brain and spinal cord.

For 75 minutes, I asked questions and she answered, carefully, emotionally, hilariously. “Icon,” she said with a laugh when I asked to describe her career. Her quips and one-liners, I would come to learn, were legendary, and almost always punctuated with four-letter words and delivered with an unmistakable Long Island accent. At one point, she burst out crying and ran upstairs. Renée explained that alternating fits of laughing or crying were one of the symptoms of bulbar-onset ALS that she couldn’t control. Even with everything happening, Nanci said she only had one choice in facing her new reality: “So you fight, that’s it.” There was a second option, but giving up was not Nanci’s style.

I tried to control my tears as we talked about how she, at this stage in her life, had to face a uniquely cruel disease that grossly elevates itself from other afflictions by ripping away the abilities to walk, talk, eat and move while the mind stays active, alert, knowing. Nanci knew the path ahead would be devastating. How could life be so cruel? Why her? I’d never cried during an interview, but we did it together.

“I cry when I have to speak about it for the first time to people because I’m touched by the fact that anyone cares,” she said. I still think about how Renée explained Nanci’s courage. “We are watching her find her way, and as ever, it’s with grace and with humor, always. The people around her circle tightly.”

They never broke formation. Team Nanci they proudly called themselves, a collective numbering in the hundreds and consisting of close friends, former clients and colleagues, loved ones, onetime assistants, fans, admirers, even fashion designers like Vera Wang who designed the T-shirts. It turns out a lot of people cared about Nanci Ryder. They kept showing up because she did. She would’ve done the same for them.

Over the next six years, I wrote more than 20 stories about Nanci, interviewing her when she could talk. When she couldn’t, she wrote answers on a Boogie Board with a stencil. When that became too tough, she tapped a computer that spoke for her. I still have that recording. When tapping became impossible, her friends spoke for her. I’ll be forever grateful to everyone on Team Nanci: Renée, Courteney Cox, Reese Witherspoon, Michael J. Fox, Bryan Lourd, Kathy and Tom Maffei, Nick Kiriazis, Simon Halls, Tracey Cunningham, Lynda Dorf, Jay Schwartz, Melissa Kates, Jennifer Allen, her twin live-in nurses Jerome and Jerald, Fred Fisher, Jenica Lancy, Asher Garfinkel and everyone at the ALS Association’s Golden West Chapter who lent their voices to my stories.

I got invited into spaces where entertainment journalists rarely go. I joined Team Nanci every year at the Walk to Defeat ALS. Because Nanci showed up, so did they, raising $820,000, and I have no doubt they will reach Nanci’s goal of $1 million. I got invited to USC where, along with Team Nanci members, we toured the lab of the brilliant Dr. Justin Ichida and met his team. They showed us centrifuges and Petri dishes that were filled with Nanci’s cells. She not only gave her presence but pieces of herself. I went to her birthday parties, hosted effortlessly by Michele and Simon Wise. Even to Nanci’s backyard. I wish I had gone more.

When it became clear that she might not see a cure, she kept showing up for those like her, their families, anyone who might one day receive the same diagnosis. I heard her say, “I have no interest in dying,” and then, “Do I live like I’m dying?” and finally, “I’ve met my match.” Imagine the burden of having to face your mortality, muster the courage to show up, and then try to articulate it all to a journalist? It’s a huge ask. No wonder Kathy always told me, time and again, “Nanci is the strongest person I’ve ever met.” I learned so much by having a front-row seat to that kind of power and presence.

Her friends already knew. “Nanci Ryder has always been one of my favorite people in the world. She was such a force, direct, blunt, yet sensitive and loyal. Her confidence, attitude, and humor were like a magnet,” Cox told me last weekend. “She fought and accepted the unimaginable with strength and grace. I will miss all the times we laughed and cried. I’m so lucky to have known Nanci Ryder. She will always be with me.”

Earlier this year, I was in the audience when Renée was honored by the Women’s Cancer Research Foundation. She dedicated her speech to Nanci, detailing the humor, selflessness, and courage she displayed while continuing to show up no matter what, first with breast cancer and then, ALS. “The seemingly smallest moments of defying fear reverberate, and what results can change our lives and our history.”

Nanci Ryder changed so many lives. The examples are everywhere now, evidenced in social media tributes, articles and on video. Onetime client Emmy Rossum tweeted that she will miss Nanci’s emails. I will, too. They were smart, funny, random, and witty. I’ve never told anyone this, but I printed one out and taped it up inside my cubicle. Are you going to do a story when I’m cured! It’s so hot out and the Republican convention is bothering me. I promised her I would. I hung the email there so I could see her words — a request that wasn’t really a question — in front of me every day as a reminder of the honor, responsibility and privilege she gave me to witness and document her journey. By allowing me into her life to tell her story, Nanci Ryder changed mine. I never asked why me. Bryan Lourd called me on a Thursday afternoon to say Nanci had passed away at 2:24 p.m. at home surrounded by her friends who loved her fiercely.

In lieu of flowers, Team Nanci requests that donations be made in Nanci Ryder’s name to the Golden West Chapter at TeamNanci.org. 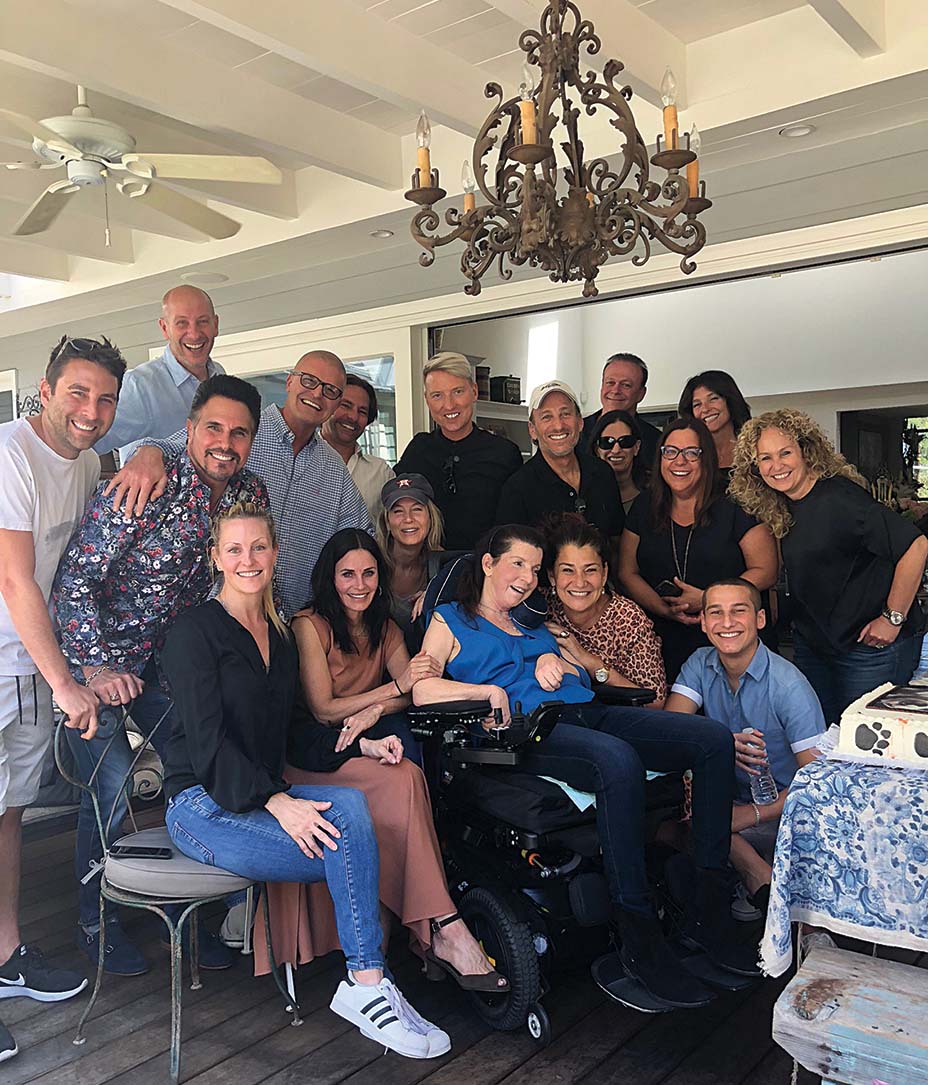 A version of this story appears in the June 17 issue of The Hollywood Reporter magazine. Click here to subscribe.