Dionysus has certainly come down in the cosmos. As depicted in Madeleine George’s new comedy, the ancient god of “agriculture, wine and song” has spent the last few years living in Burlington, Vt., operating a landscaping business “with a focus on sustainability and small-scale permaculture.” The deity is naturally not at all happy with the way we’re currently ruining the planet, so, assuming the form of Diane, a butch lesbian landscaper, he attempts to recruit new followers to save us from ourselves.

That he chooses to start his mission with four New Jersey housewives living in a Monmouth County cul-de-sac is the central conceit of the play, which veers uneasily from Desperate Housewives-style satire into absurdist fantasy. The work feels strained in both aspects, never achieving the comic liftoff to which it aspires.

Diane, both the character and the play, certainly tries very hard. Played by transgender performer Becca Blackwell, she sports red hair and is clad in a plaid shirt, khaki cargo pants, dark socks and boots. She’s determined to seduce the four women, starting with Carol (Mia Barron), a pharmaceutical company executive who offends Diane by using the term “curb appeal” and doesn’t embrace her plan to plant pawpaw trees in her backyard. And although she briefly falls under Diane’s hypnotic spell, the moment quickly passes.

Diane has an easier time of it with the sad-sack Beth (Kate Wetherhead), whose husband recently left her and who quickly falls for Diane’s seduction. “It feels good to be back in the saddle,” Diane exults, before moving on to Renee (Michelle Beck), an editor at HGTV Magazine, and the earthily Italian, animal print-wearing Pam (Danielle Skraastad), who can’t believe Diane has yet to patronize Delfini’s, the landmark local deli. 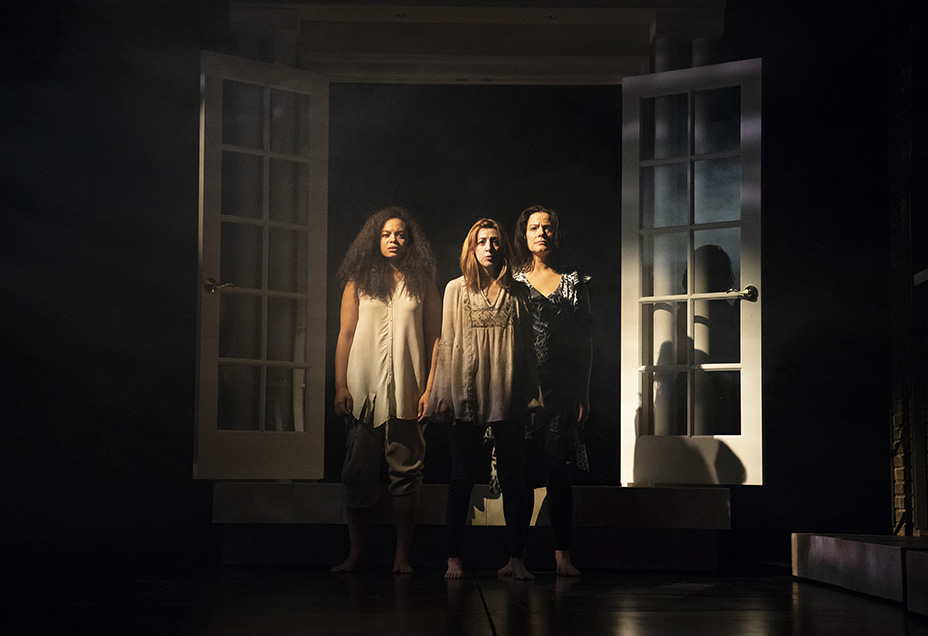 A co-production of New York Theatre Workshop and WP Theater (formerly the Women’s Project), the play written by Pulitzer Prize finalist George The (curious case of the) Watson Intelligence) doesn’t exactly paint a flattering portrait of its female characters, who register as little more than neurotic stereotypes. That’s not to say they’re not amusing at times, especially the no-nonsense Pam, who astounds her friends by telling them she has sex with her husband once a day: “To keep from, you know, hating his guts.” Skraastad, hilariously channeling Fran Drescher, easily steals the show and scores the evening’s biggest laughs.

It would be easier to embrace the fantastical premise if there were a more compelling figure at its center. Unfortunately, Blackwell proves distinctly underwhelming in the title role, failing to convey the magnetic charisma necessary to make us believe the human characters would fall under the god’s spell. By the time they do, lapsing into a frenzied Bacchae-style dance number and singing an original song composed by The Bengsons, it’s become impossible to suspend disbelief.

Director Leigh Silverman (Violet, The Lifespan of a Fact) doesn’t manage to infuse much dynamism into the talky, static proceedings, which need be far more antic to work. Kate Voyce’s costumes and Rachel Hauck’s set design at least are spot-on, the latter consisting of a generic suburban kitchen that represents the homes of all four women.

Hurricane Diane, which makes oblique references to Hurricane Sandy, purports to deal with issues of environmentalism and climate change. But those important topics quickly fall by the wayside in favor of strained absurdism. Even worse, the play commits the cardinal sin of somehow making Dionysus seem utterly boring.