While David Hare has long been Britain’s premier political dramatist, recent years have seen James Graham moving swiftly into the rear-view mirror. I’m Not Running is Hare’s first political play in around a decade. But if he’s dusted himself off for the challenge, on this evidence he is going to have to raise his game.

Though returning to one of the playwright’s favorite hunting grounds, the Labour Party (The Absence of War, Gethsemane), the new work is not vintage Hare. At first glance it’s even perplexing — set chiefly in the present, but with no mention of Jeremy Corbyn, let alone Brexit and the global rise of reactionary populism. It’s not the shuddering “state of the nation” of old.

That said, Hare’s central theme remains apposite, namely the conundrum of how to maintain a political system — and how one might be peopled — when the public has no faith whatsoever in professional politicians.

It opens with a tease, as press officer Sandy Mynott (Joshua McGuire) announces that his boss, Pauline Gibson (Sian Brooke), will not be standing for election as leader of the Labour Party. “Can you tell us exactly what that means?” asks one of the press corps — a reminder, lest we need one these days, that press conferences are not where you go for reliable information.

Gibson is not even a Labour MP, but an independent, a former doctor turned single-issue candidate  — “the angel of the NHS” — who swept into politics on a wave of public love after her successful campaign to save her hospital from closure. Now she is being urged further. But she’s not biting. Apparently.

Moving between 1997, 2009 and the present day, Hare attempts to portray the personal considerations behind such a move to power, a flesh-and-blood look behind the political facade — the platitudes and promises customarily offered during political campaigns. In particular, we see the commitment phobia that comes from an unhappy childhood, which has already affected Pauline’s love life and seen her declare, “I’m not a joiner.” Once upon a time such a position would be thought anathema to the game of politics.

And yet she does genuinely care. Underlying Pauline’s five-year hospital campaign is an innate belief in people and what they need. She doesn’t need to convince the voters that she can offer more, but herself. 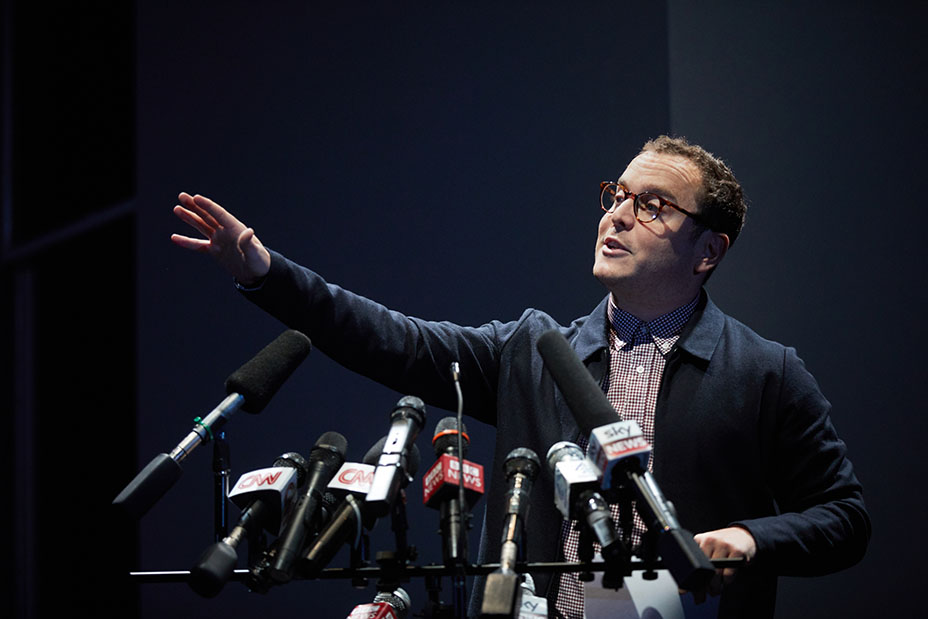 Such integrity positions Pauline as the antithesis to former lover and — should she run — perturbed rival for the Labour leadership Jack Gould (Alex Hassell). There’s a nod to past Labour leader Ed Miliband in the fact that Jack’s father is a revered left-wing historian, but a bigger splash of Tony Blair in his career-serving pragmatism; Jack is one of those socialists who, in Pauline’s estimation, “think left, live right.”

Surprisingly, it’s in trying to make Pauline a three-dimensional character that Hare falls short. The playwright was once a master at the interplay between the personal and the political. Here the flashbacks to Pauline’s student days, her difficult relationship with her mother and on-off romantic relations with Jack, are horribly clunky — weighed down by redundant dialogue and histrionics. The effort to establish Pauline’s authenticity through a hard-luck background feels contrived.

When Hare attempts to dovetail the campaign to save the hospital (from the last Labour government’s notorious “rationalization” of the NHS) with Pauline and Jack’s complicated feelings for each other, he ties himself in knots. In these scenes it’s difficult for Brooke to make her character anything other than shrill.

Both play and performance are much more effective when Pauline becomes the finished article, the politician willing to take her time before rushing to power — to work out who and what she might truthfully represent — and with the confidence to play the male-dominated system while she decides. The second act becomes funnier, more focused, with both Hassell as the smooth but vacuous Jack and McGuire as loyal sidekick Sandy lending excellent, mostly comic support. And the “will she, won’t she” intrigue comes to a quite satisfying conclusion.

Hare touches on a deep flaw in Labour’s history, namely its failure to elect a woman as leader; it may well not be coincidence that Brooke, perhaps best known as Sherlock Holmes’ psychotic genius sister on Sherlock, here bears a striking resemblance to the Labour MP Yvette Cooper, who lost the leadership election to Corbyn.

More generally, the playwright offers a much-needed rebuttal to the likes of Nigel Farage in the U.K. and Donald Trump in the U.S., individuals who have feasted on disillusion with the political establishment without offering anything wholesome in its place. The fictional Pauline may have to join Labour to have any possibility of high office (as Trump conveniently hitched his wagon to the Republicans) but she does offer a humane political vision.

Neil Armfield provides pacy, no-nonsense direction. Ralph Myers’ set is simplicity itself: an open box in the center of the bare stage acts as Westminster office and various domestic spaces, onto whose exterior walls television interviews are projected, their airbrushed soundbites offering no evidence of the truth or turmoil beneath.