One of the hottest spots in the San Fernando Valley this August has been a most curious address: a former Sports Authority store in Sherman Oaks.

That’s where Van Eaton Galleries has hosted its free pop-up, “That’s From Disneyland!,” an exhibition designed to celebrate the history and artistry of the Disneyland Park courtesy one of the world’s largest private Disneyland memorabilia collections. Collector and agent Richard Kraft teamed with Van Eaton for the interactive museum of sorts which closes Aug. 24 ahead of the Aug. 25-26 auction of Kraft’s entire collection. A portion of the proceeds from the auction will go to benefit the Coffin-Siris Syndrome Foundation and CHIME Institute For Early Education, both of which benefit children with special needs, like Kraft’s daughter.

Van Eaton Galleries’ Mike Van Eaton spoke to The Hollywood Reporter regarding Kraft’s motivation for collecting thousands of Disney pieces. “His brother died and when they were kids they used to go to the park a lot, so he sort of reconnected with his brother through the park. One day he saw an auction that had one of the attraction posters in it and he bought that attraction poster and then he started buying more and more,” Van Eaton recalled. “He would just grab everything he could.”

Once Kraft and Van Eaton teamed up for the exhibit, they knew they needed to find the right location for the collection that includes original pre-1955 concept art, ride vehicles, props, attraction posters, paper goods, toys and other collectibles. After checking out everything from hangars at the Van Nuys Airport to the Roosevelt Hotel, they settled on a 40,000-square-foot spot on Riverside Drive, a onetime home to Sports Authority. “I found this location in January and we moved in in July,” Van Eaton explained. “I had an auction in the beginning of July and we moved in here. We had four carpenters. We had five painters. And we just took this place apart.” 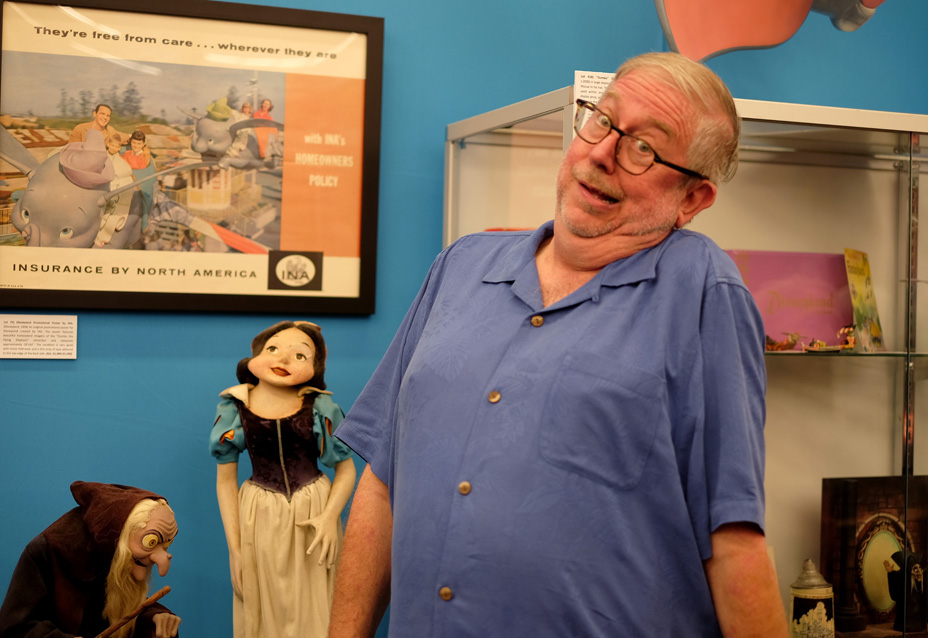 The results have been worth it. Van Eaton reveals that a couple asked if they could have their wedding inside the pop-up, in front of one of the exhibits most eye-catching and Instagrammable pieces — a giant letter “D.” Kraft is on board and will officiate the ceremony, which will include 25 guests.

The exhibit has also hosted a plethora of celebrities who’ve headed to Sherman Oaks to check out the Disney mania. Jeff Garlin, Paul Scheer, Sarah Michelle Gellar, and John Stamos have stopped by, said Van Eaton. Stamos “purchased things at our galleries. He is a big Disney fan. He has a ‘D’ of his own in his front yard,” he said. “I had Neil Patrick Harris here yesterday. He’s a big Haunted Mansion fan. He’s bought from us before.”

Additionally, the gallery has hosted several events featuring the likes of Susan Egan, Leonard Maltin and Alan Menken. The Walt Disney Company also seems to be responding positively to the exhibit. Van Eaton noted that the president of Disneyland came by, as did three busloads of guests from nearby Disney Studios in Burbank. “They asked for a private tour, so we let them in early and they got to look around,” he said.

Now that he has had a chance to look closely at the entire collection, Van Eaton said he expects the Dumbo piece to fetch the most amount of cash — bidding starts at $100,000 — or “those Haunted Mansion paintings, which has a reputation of going very high.”

The auction catalog can be found here. 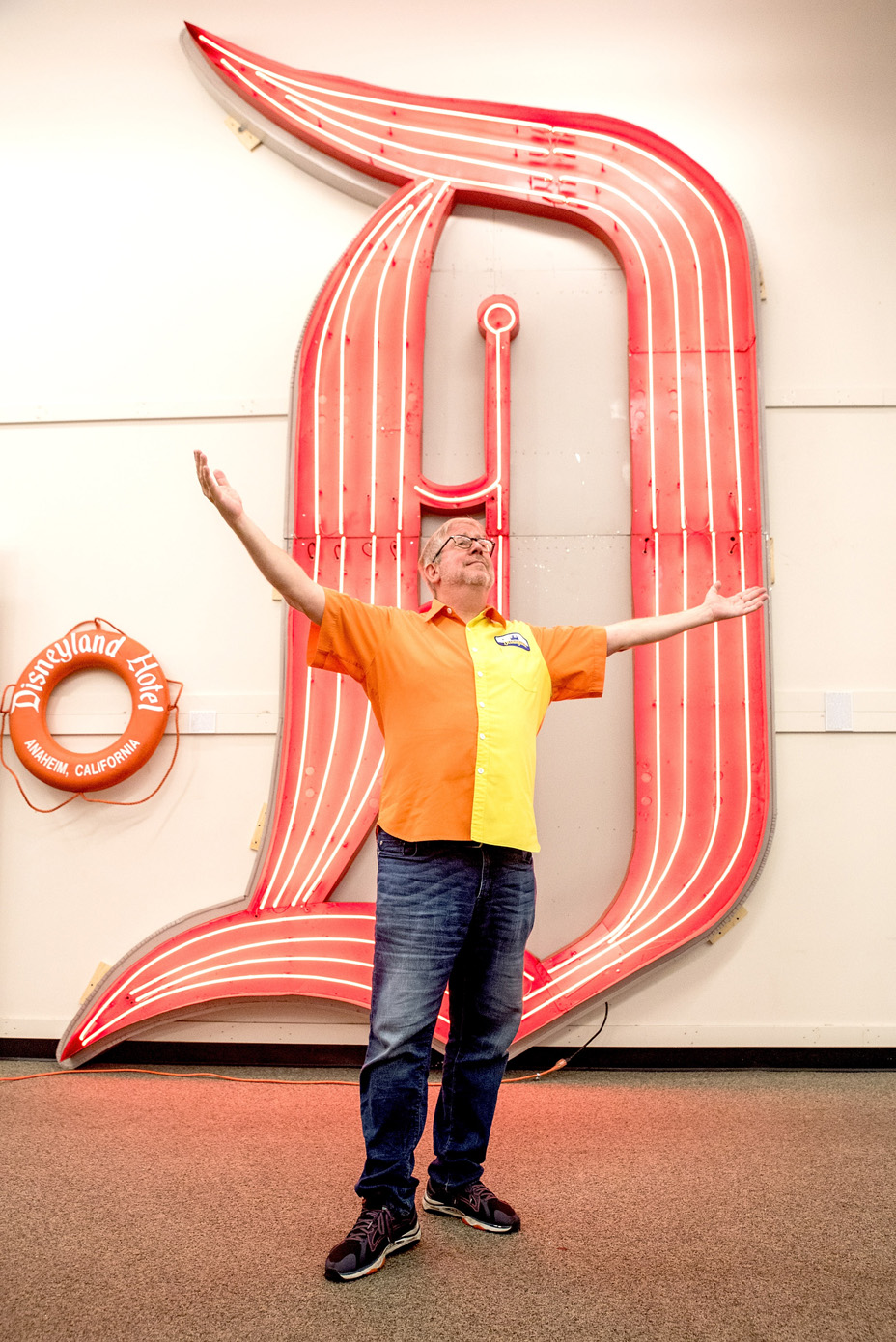 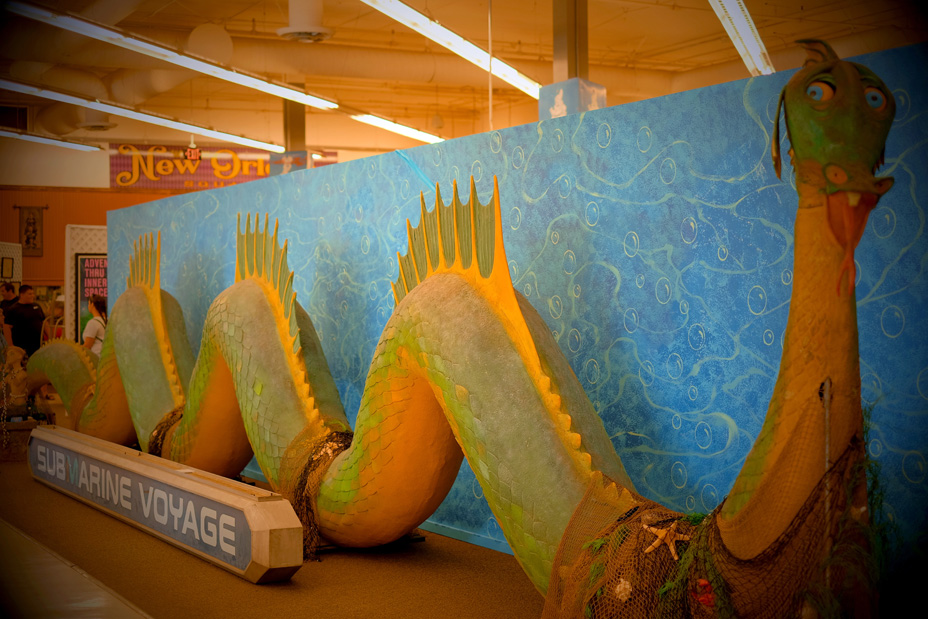