“This is the culmination of 13 years of work as a group and is a generational leap forward in our work from our first project,” says Corvas Brinkerhoff, Meow Wolf co-founder and executive creative director of Meow Wolf Las Vegas.

Meow Wolf is a multidisciplinary group of artists and creatives — writers, painters, sculptors, actors, lighting designers, musicians, and more — whose first permanent exhibition, the House of Eternal Return, inside a former bowling alley owned by Martin, opened in 2016 in Santa Fe and has attracted more than 2 million visitors. 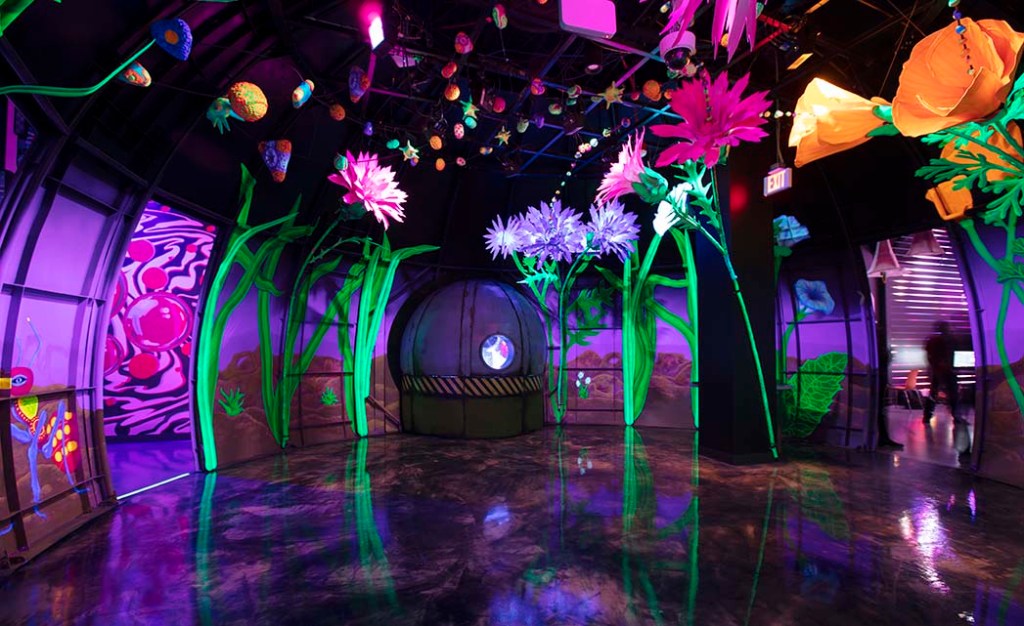 “Creating our work collaboratively gave us leverage to make these things that were way bigger and more exciting than anything we could do by ourselves,” says Brinkerhoff.

What is Omega Mart?

Omega Mart, which bills itself as “America’s Most Exceptional Grocery Store,” is stocked with hundreds of custom-made surrealist products — all for sale — such as “Lil Meow” Gruel for Cats in Pigeon Mousse flavor, Mammoth Chunks, Organic Moth Milk and Camel’s Dream of Mushroom Soup. The 52,000-square-foot space — more than double the size of the Santa Fe location —  took three and a half years to create.

“Omega Mart, is the name of the room that kicks off the exhibit and it’s also the name of the whole exhibition, but there is more stuff outside of this room,” Brinkerhoff says. “On the other side is another world. And that’s where all these different artists from around the world are featured.”

Via various “portals” within this maximalist and psychedelic grocery store — such as a refrigerated beverage case and a camping display — spectators enter what the creators call a parallel dimension with four vast spaces and 60 additional unique environments.

“We have a core team that we work with on every project. But then the other half is local Las Vegas artists and artists from all over the world, all curated into this exhibition,” says Brinkerhoff. “When we come into a city, we feel like we have to really work hard to connect with that local community of artists.” 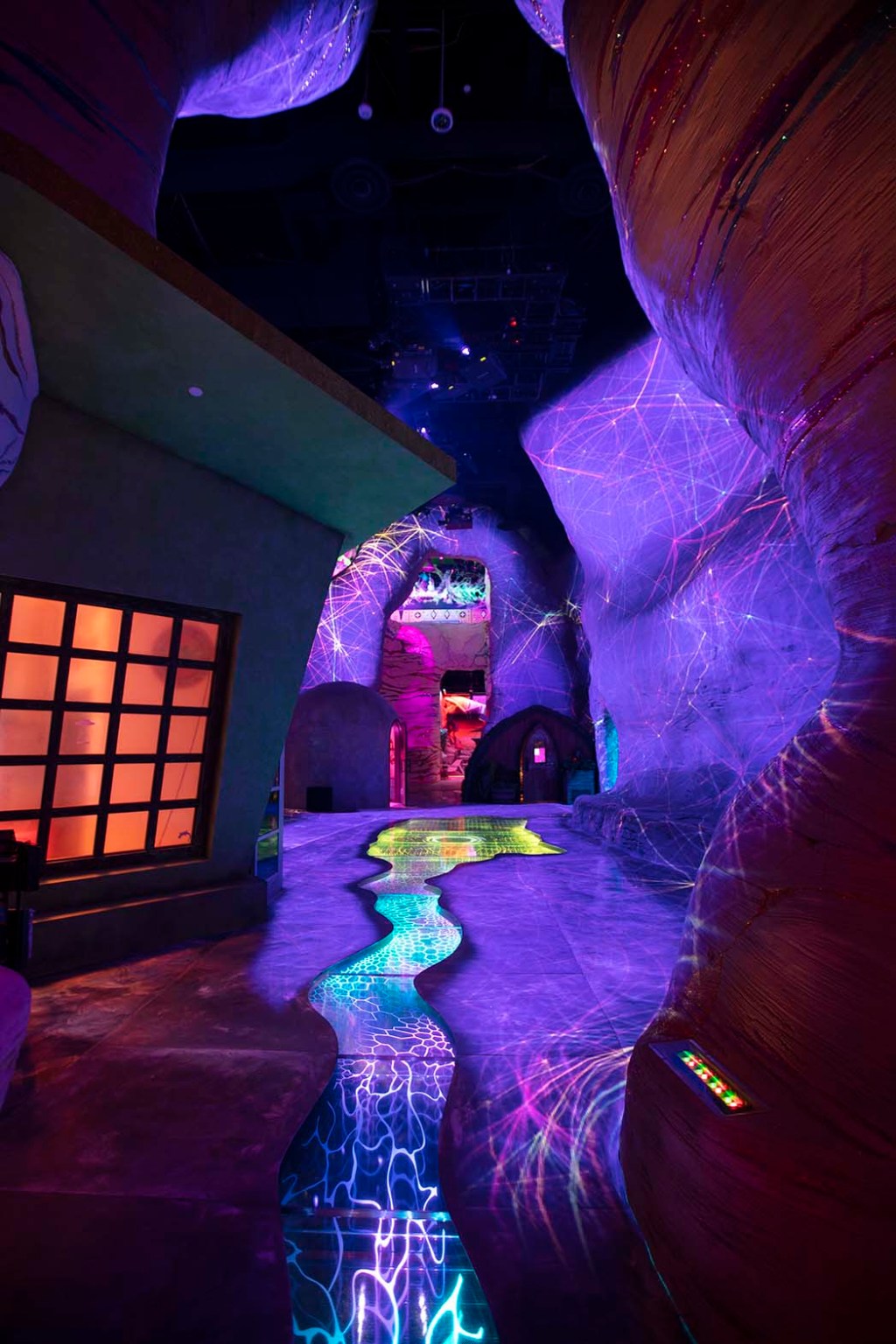 Spectators are led through a transformative narrative guided by interactive visual, sound, film and digital content all layered into multi-dimensional art. Video content — the length of three feature films — is embedded throughout.

What Exactly is Going on at Omega Mart?

The storyline of the new art experience centers on a mythical energy, called The Source. The Omega Mart grocery store has found a way to harness The Source and put it into their products, and they sell them to America, Brinkerhoff explains.

Guests can follow the storylines of DramCorp, the corporate giant behind Omega Mart, which has moved into this parallel dimension, taking over parts of the desert, as well as those of three sisters that lead a resistance to this infiltration. Look for clues as to what is going on within the exhibits, installation-filled rooms and terrains, or choose your own adventure — anything goes.

“There are all these different characters that live in the desert, and you can learn their backstory of colonialism and environmental stewardship,” he says. “We are trying to create this experiential floor, basically, a sort of quality and depth of experience that everybody gets, no matter how deep they go into the narrative. Our North Star is always ‘interesting.’ Is this something that’s going to inspire and captivate people? That’s where we start and then people who want to probe deeper into it, there’s something there for them to find. But if you don’t, it’s still beautiful, inspiring and leaves a really powerful impression on you.” 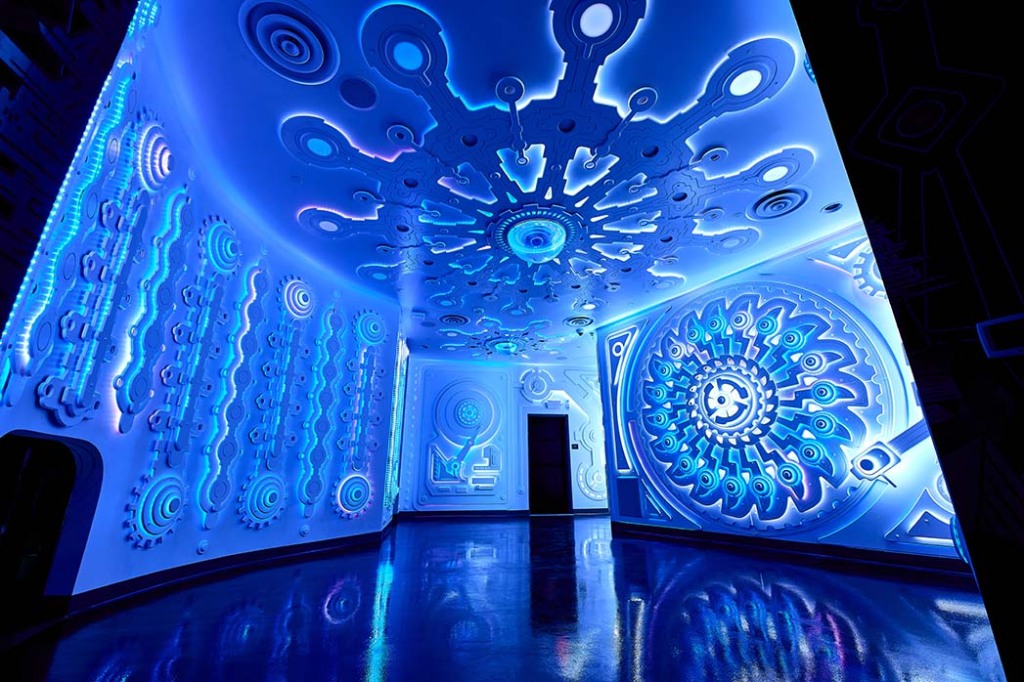 The authenticity and approachability of a Meow Wolf experience is a response to the cynicism and gatekeeping of the contemporary art world, something that Brinkerhoff says the collective strives to tear down. “This is a bridge to an audience that doesn’t necessarily spend a lot of time going to galleries or museums,” he says. “We feel there’s a fundamental human drive and desire for visual art experiences. And right now, the state of the contemporary art world is very alienating for most people. We’re trying to create a bridge for more people to engage with art.”

The late former Zappos head, Tony Hsieh, originally courted Meow Wolf for downtown Las Vegas. “For a good year, we were pretty sure we were going to do something there and then that fizzled out,” Brinkerhoff says. 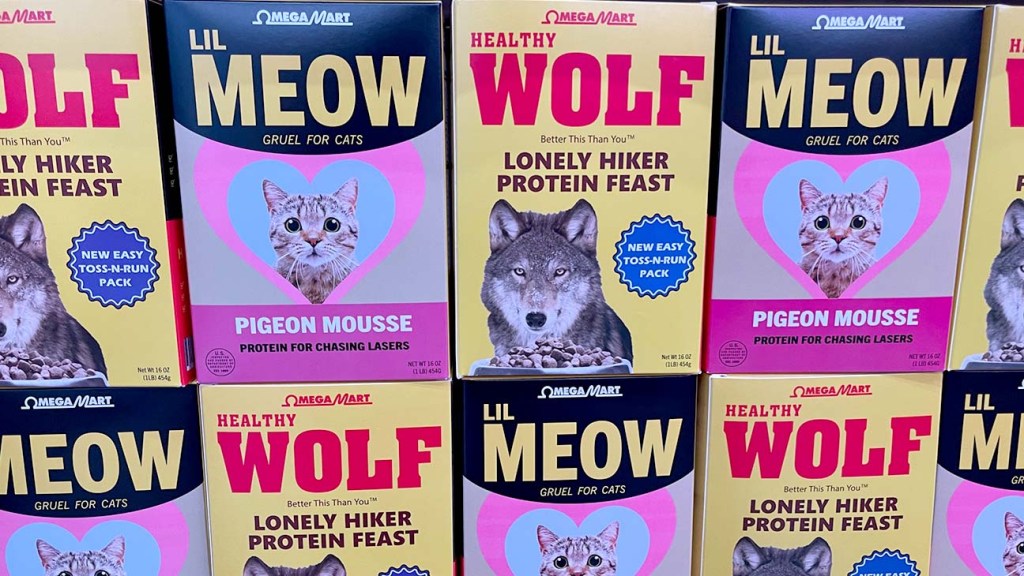 But the seeds were already planted and the collective fell in love with the city’s possibility. “We felt there was a really cool opportunity here to create something that can help catalyze an existing art scene that is underserved. And it’s super vibrant,” he says. “There are so many super capable creators in the city. And we felt like there was something really interesting and exciting about being able to connect with the international audience of people that’s coming to Las Vegas.”

The Game of Thrones creator consults on story building and vision for the world of Meow Wolf.

“Think of it like the Marvel Universe,” Brinkerhoff says. “There are different characters and sagas but they all kind of exist in this common universe that is the connective tissue between all of our different shows that we’re developing.”

Omega Mart is projected to see around 1 million visitors per year post-pandemic — as of now, attendance will be limited in accordance with state guidelines.  “If you count the vertical space, it’s actually over seven times bigger [than Santa Fe] — as a designer, it’s an incredible experience to get to design at this size,” Brinkerhoff says, noting plans for an eventual expansion. “Actually we have another 12,000 square feet that hasn’t been opened yet.” Additionally, Meow Wolf will open another permanent installation in Denver later this year.