As a judge on American Idol, The X Factor and now America’s Got Talent, Simon Cowell, 58, is known for being both a fierce critic and a passionate champion of new talent. He brings that same perspective to home design. “If I hadn’t done TV or music, I might have done interior design,” he says. “I like it, and I’m quite good at it. So I like to work with design teams who become collaborators.” Specifically March & White, the London-based duo that Cowell enlisted to work on his residences in London and New York, along with two in Los Angeles. “They have good taste,” Cowell says of partners Elliot March and James White, both 39. “But they don’t try to push you to do what they want to do rather than what you want to do.”

March and White met at Oxford in the ‘90s and made a name for themselves in Europe and the Middle East creating residences, private jets and mega yachts for a client list that includes members of the Saudi royal family; their designs for London’s Devonshire Club and The Arts Club (investor Gwyneth Paltrow is planning an outpost in West Hollywood) also made a splash. Cowell approached March & White in 2015 and became interested in working with the duo when he saw their plans for Project Jupiter, a 123-meter Qatari yacht. He hired them to create a sleek bar in his mansion in London’s tony Holland Park. It became his favorite room. “This is going to make me sound like an alcoholic,” he says. “I don’t drink from it every day. I just think it’s beautiful.” 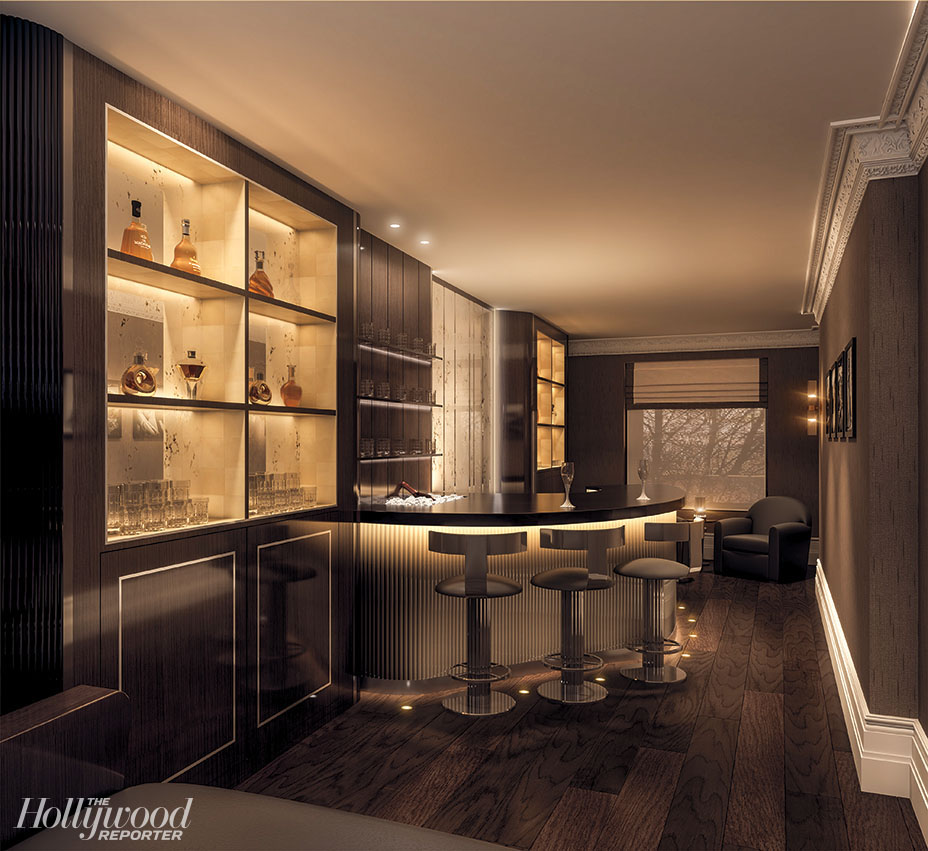 The designers then transformed Cowell’s longtime Beverly Hills residence, located in the Flats and purchased from Jennifer Lopez in 2005, from a bachelor pad into a family home he shares with partner Lauren Silverman, their 3-year-old son and Silverman’s 11-year-old son from a previous marriage. The couple use Pinterest to share ideas. “We argue [about fabrics] all of the time, but then we love the same things,” like lighting and symmetry, says Cowell. “Sometimes I wake up in the middle of the night and take her downstairs and go, ‘I think I know why I hate this room!’ and I’ll drive her crazy.”

Staying true to the monochromatic aesthetic found in all of Cowell’s homes — not surprising for a guy who is almost always in a black or white shirt — March & White created subtle art deco-style interiors incorporating ebony lacquered woods, black and white stone, polished nickel and rubbed bronze. Custom sofas and armchairs offer hidden compartments for iPhone chargers or packs of Cowell’s cigarettes. They also redesigned the pool and covered the grounds in lush vegetation. “When I moved here, the house was uncomfortable and the garden looked like a desert,” Cowell says. “Now we have millions of flowers, so it smells nice and birds and insects come in.” 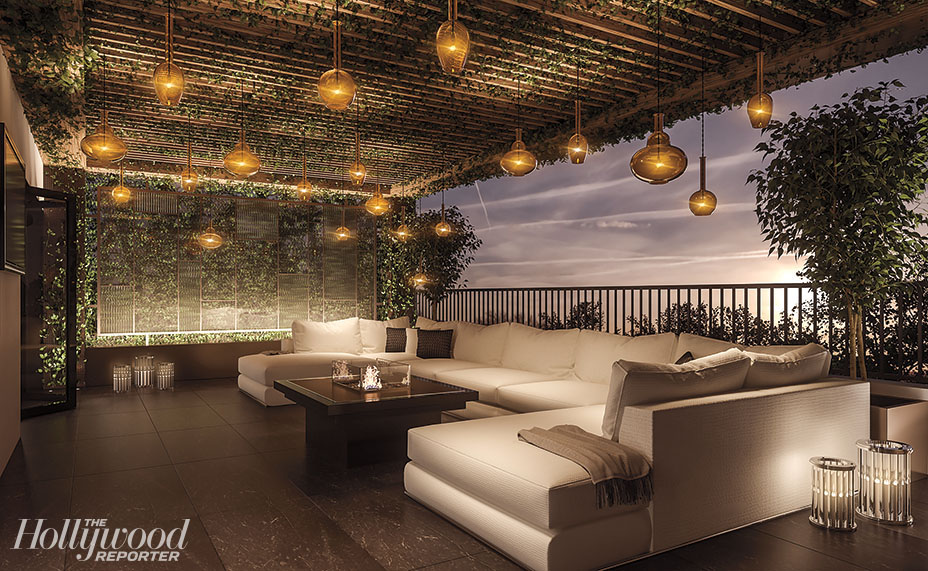 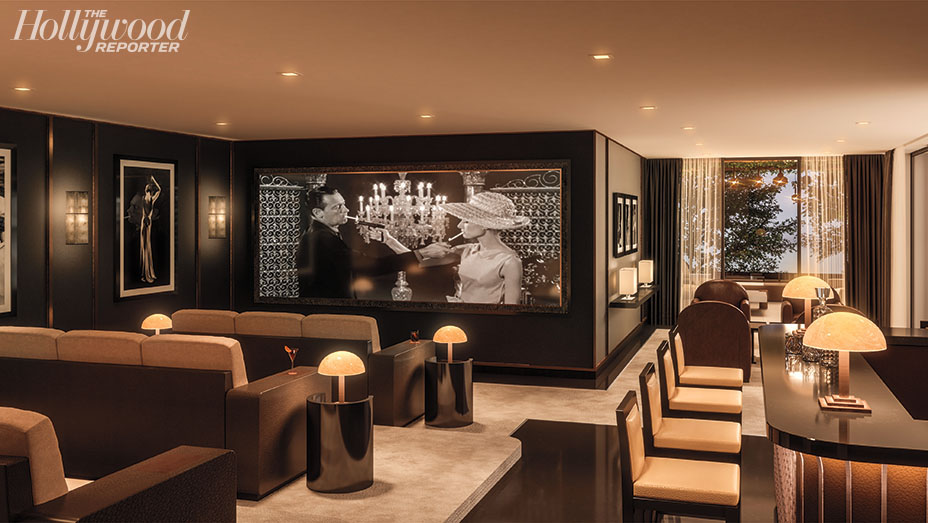 The master bedroom is a sanctuary with plush gray carpeting and a fireplace. French doors lead to a terrace with a fire pit. “We spend a lot of time in our bedroom,” Silverman says. “Simon likes to have breakfast in bed. At night, we sit outside and have a drink, and it’s really cozy.”

March & White is also working on Cowell’s $10.85 million penthouse overlooking Central Park and a second home in Los Angeles in the coveted Trousdale Estates. Cowell bought that property — a Hal Levitt-designed midcentury stunner built in 1966 — from then-AEG Live CEO Randy Phillips for $15.5 million in 2011, and the meticulous ongoing redesign has become a labor of love. “The view just takes your breath away,” says Silverman. “You can see all the way to the ocean and feel like you are in a treehouse.” The redesign is preserving the home’s rich history, with some modern twists. The living room, not yet finished, holds sculptural Vladimir Kagan sofas upholstered in cashmere facing an open fireplace. Upstairs, the master suite takes advantage of the views, with a bed in the center of the room and a bathroom that opens up to the outdoors. “Technology should be hidden,” says March. “So we designed an ottoman that folds out into a 100-inch TV.” One of Cowell’s favorite additions is a ground-floor screening room. “Ninety-nine percent of people that put a cinema or a gym in the basement never use it, because it smells,” says Cowell. “Now you can open up the doors so that it’s outside, and I’ve got another bar … you’ll see there’s a trend here.”

In response to new U.S. projects — including several residences on both coasts and interiors for the Rafael Vinoly condominium skyscraper 125 Greenwich Street — March & White has recently opened offices in L.A. and New York. As grateful as they are to Cowell for his help, the feeling seems mutual. “Their patience, their renderings, their pace: That’s why I recommend them,” says the producer. “As long as they finish my houses first!”

“Holland & Sherry for textiles and coverings. The quality is exceptional.”
hollandandsherry.com

“If you are looking to create a handwoven rug, the team at Marc Phillips will work with your vision.”
marcphillipsrugs.com

“For accessories, Hudson Grace at the Brentwood Country Mart. We like their striking black pillar candles.”
hudsongracesf.com