On the page, Terms of Endearment is still a potent heart-warmer and heartbreaker, even when stripped bare and read aloud onstage by a top-flight acting ensemble. This was best evidenced during a special performance at the Geffen Theater on Monday to benefit Stand Up to Cancer, where it wasn’t just the audience who was alternately laughing and fighting back tears — castmembers were also frequently chuckling and dabbing their eyes with tissues.

“How could you not?” said Melissa Benoist after headlining the performance along with her friend and Supergirl co-star Calista Flockhart — the pair assumed the roles made famous by Debra Winger and Shirley MacLaine in the 1983 Academy Award-winning film from director James L. Brooks, based on the Larry McMurtry novel. “How can you not get swept up? It’s a beautiful story of love, of family and mothers and daughters, and cancer is a terrible, terrible disease that has affected, I think, everyone in the world.”

The special performance reading sprang out of a conversation that Benoist and her onscreen co-star and offscreen partner Chris Wood had with their Supergirl boss Greg Berlanti over dinner while he was visiting the Vancouver set. The uber-executive television producer had recently lost his mother to cancer, and his desire to help raise funds to fight the disease suddenly dovetailed with a pursuit the couple had been enjoying.

“Chris and I read plays together out loud in our spare time. Greg was like, ‘Oh, well would you ever want to do that in front of people?’ And I said, ‘Sure,’” Benoist told THR. “And he said, ‘Well, do you you want to do it for a good cause?’ And we were like, ‘Of course.’”

Benoist shot off a text to Flockhart, who was instantly on board, and suddenly a project began to take shape: Belanti’s production company would team with his collaborator, TV writer-producer Jessica Queller, to stage a benefit script reading.

“We were in search of what was the perfect thing for the three of them,” recalled Berlanti, whose team quickly zeroed in on Brooks’ much-revered, tragicomic screenplay about an often prickly but deeply loving mother and daughter duo that takes a deeply poignant turn with the daughter is diagnosed with cancer.

“For this particular cause it just seemed ideal,” said Berlanti, who received rights approvals from the film’s studio, Paramount Pictures, and from Brooks himself.

“And first, we thought, ‘Is it too perfect? Does it feel too ideal, or too on the nose?’ And we just kind of went with it. The notion of having worked with Melissa and Calista together and Chris and of seeing them in those parts was really appealing, even if it was just in our living room.”

With Benoist as the lighthearted, passion-pursuing Emma, Flockhart as her steely, critical mother Aurora Greenaway and Woods as Emma’s philandering professor husband Flap, an all-star ensemble gradually formed around them: Alfred Molina as frisky, debauched astronaut Garrett Breedlove (the scene-stealing role played by Jack Nicholson in the film), Constance Wu as Emma’s devoted best friend Patsy, Kumail Nanjiani as Emma’s married paramour Sam, and supporting roles rounded out by Kate Burton, Willie Garson, Italia Ricci, Daniel Beaty, Jake Brennan and Ethan Jones. Gordon Greenberg took on directorial duties, and the performance would benefit Stand Up to Cancer and the host venue, the Geffen. “They all kind of knew they wanted to do it for the right reasons,” Berlanti said.

“Everyone in this cast and probably sitting in this theater has been known someone or have suffered it themselves, and it’s so relevant to this script,” Benoist said “I think there’s a perfect way to pay homage to people that have been lost and to people that are fighting and show that love is the most important thing to cling to.”

“There’s something about James Brooks’ writing, how kind of perfect it is,” the actress added. “We didn’t really have to do much but be there and say the words. And it doesn’t hurt any less the more you read it. Every time I read it just hurt more and more. It packs a punch.”

The performance, which was staged following a single rehearsal a day earlier, drew equally Hollywood-centric audience members, including Flockhart’s husband Harrison Ford (sporting a bushy gray beard and embracing her lovingly after the performance as she knelt from the stage), Rebel Wilson, William Petersen, Shawn Levy and Bill Prady. But for the cast and producers, the starriest guest in attendance was the writer himself, Brooks. After the performance, he was even urged by the cast to join them onstage for photos.

“We didn’t expect him to be here tonight,” Berlanti admitted. “We wrote a letter just asking him like Waiting for Guffman. We weren’t sure if he was going to show or not!”

“I found out right before we went onstage. And I was like, “Oh, my god, he’s here!” laughed Wu, who admitted she was one of the ones sniffling on stage. “I’m was trying so hard not to cry. Like, I was like biting my tongue.”

“For me it was so great being back in a theater, which is where I grew up, with a script that is just so great, the characters and the arc of the lives throughout them,” Wu added. “I was a waitress five years ago, so it’s like, ‘I can’t even believe I’m up here on this stage, getting to read these words.’”

Flockhart confessed that the underlying cause helped allay any nerves about stepping into a role made iconic by MacLaine. “That’s the bottom line, so when you get nervous, you just say, ‘I’m not going to be nervous because this is not about me. It’s about the cause.’ And then you’re not nervous anymore.”

Her first impulse, she revealed, was to take a peek at the source material. “I started to watch the movie — this was before I got the script — and then I decided not to watch the movie after the first scene, because I thought it would really mess with my head and I could never be Shirley MacLaine — I just felt completely and utterly intimidated,” she recalled. “[But] this script is truly perfect. Every time we read it, every time I read it at home by myself, I cried. I could not cry. Today all I had to do is try really hard not to cry. That was my objective.”

She also loved a couple of the meta-qualities of the production, like romantically sparring with Molina, who appeared opposite her husband in Raiders of the Lost Ark in an early role, and the something fraught dynamic she got to share with Benoist, which had echoes of their past collaboration. “Interestingly enough, the producer told me that this relationship is similar to Cat Grant and Supergirl, in a way,” she said. That wasn’t lost on us. We just have fun together and enjoy each other.”

The entire experience proved to be a cathartic one for Berlanti and his family, a year and a half after his mother’s passing. “All those scenes are just so resonant,” he said. My whole family was here tonight — my sister and my nieces and my dad.” He said he hopes that it’s the kickoff to an ongoing tradition.

“We said that if it works we would try and do one a year — find a new one and recruit,” he said. “It’s fun recruiting them because it’s for the right cause. You can just badger! It’s a great thing. We get to do it all the time for, like, not the best reasons, and so to be able to do it for a good reason is to use all those muscles in a good way, that’s been very rewarding.”

“I love this kind of work,” Flockhart agreed. “It’s quick. You’re in and out. You raise money for a great cause. What can be bad? What can be wrong?”

More than $100,000 was raised at the one-night-only reading to benefit Stand Up to Cancer and Geffen Playhouse. 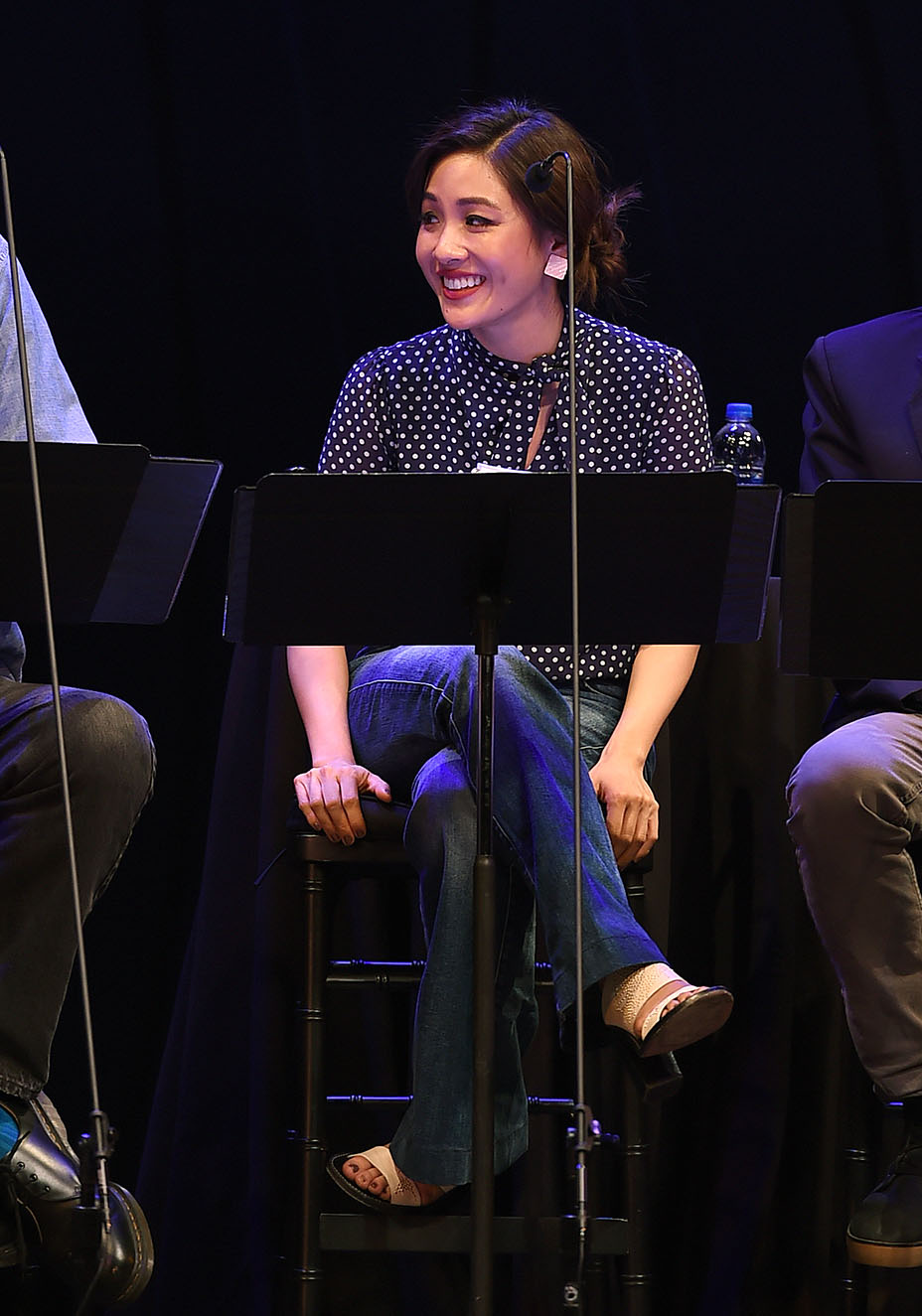