Storytelling is our humanity, and Venice does it with elegance, passion and decades of history — arriving at the festival, I felt some of the glamour the industry has been missing and an artistic fever, very Cinema Paradiso. Damien Chazelle’s First Man was the perfect film to kick things off — with the extended ovation, you could feel awards season had started.

After the premiere there was a small dinner at Harry’s Bar where Damien and his wife, Olivia Hamilton, Claire Foy and Jason Clarke were honored with moving toasts from producer (and Paramount president) Wyck Godfrey and Universal’s Peter Cramer. 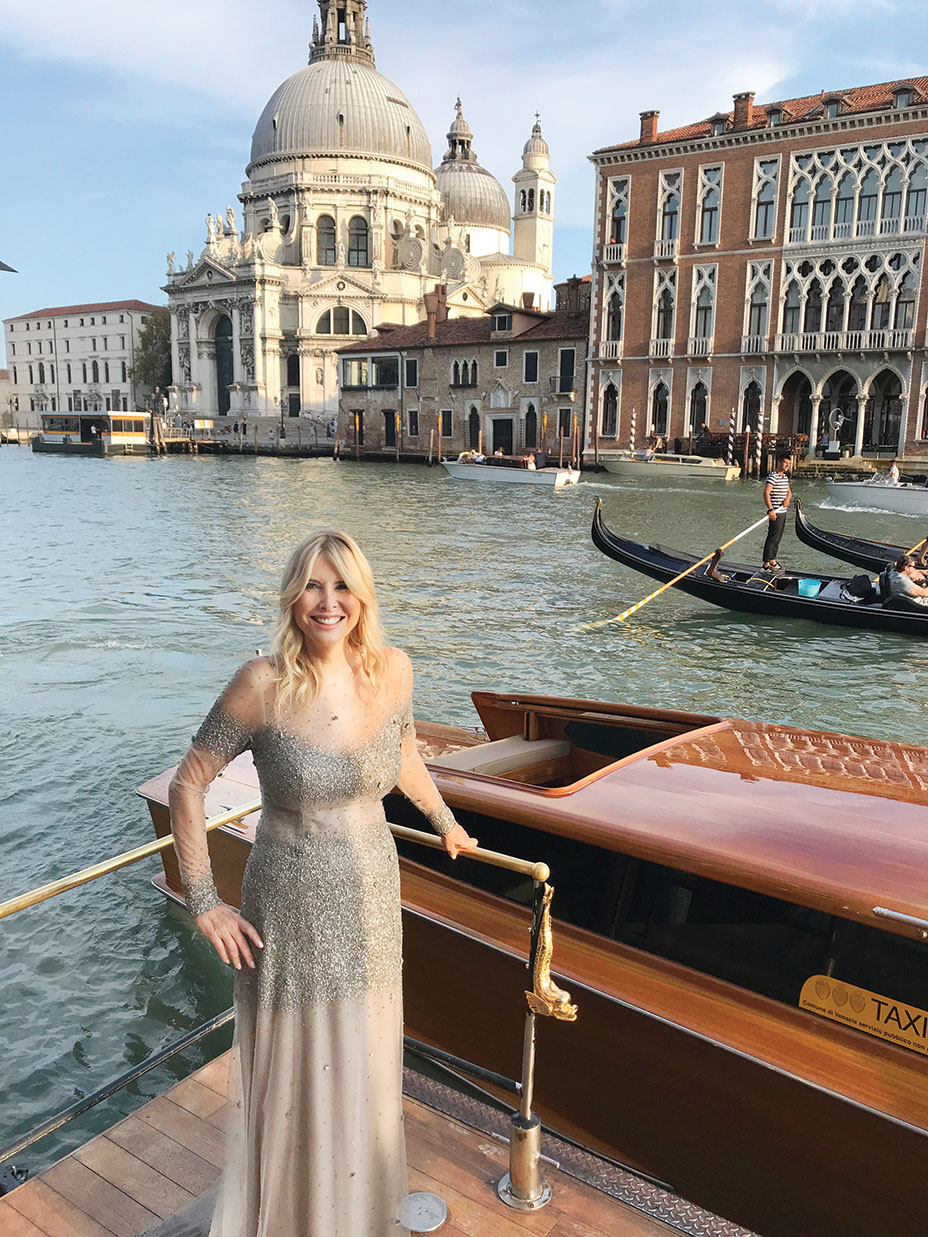 The night before, the First Man cast and filmmakers had gathered for a dinner on the Terrace at the beautifully refurbished Gritti Palace, where I was staying (exceptional food, five-star everything, every detail handled for you with Italian charm), with a La La Land full moon as the backdrop.

And earlier that day, what transpired on the main water route between the Cipriani Hotel and the Gritti was indicative of the mutual respect in this industry. The studios may be in competition in the theaters and on the awards circuit, but it’s a community of filmmakers, so when Peter Cramer and his wife, Stacy, had the equivalent of an overheated engine in the Universal water taxi, stuck with no motor running in neutral canal waters, Fox Searchlight’s vessel came to the rescue and gave Universal a ride back to Cipriani. 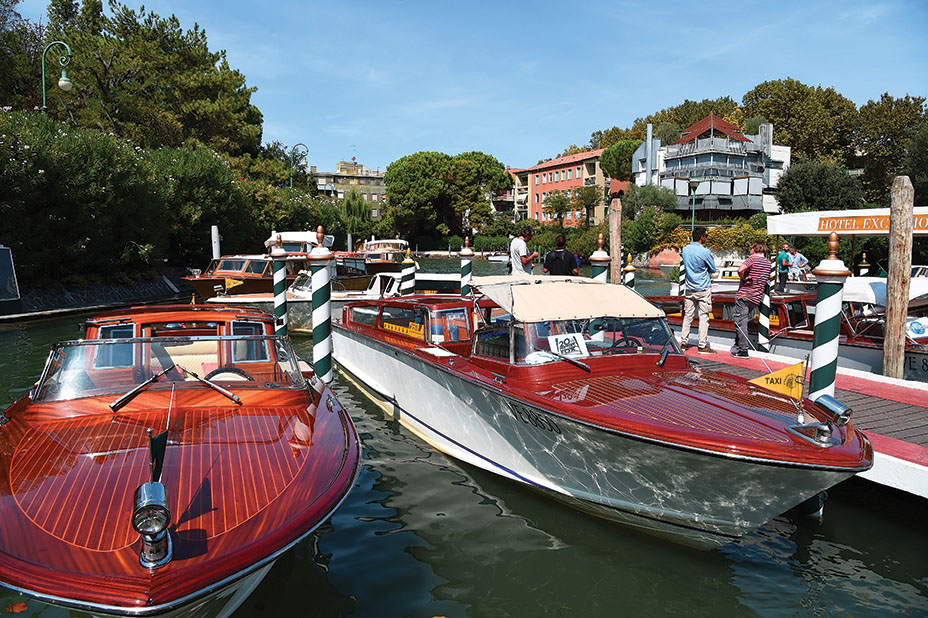 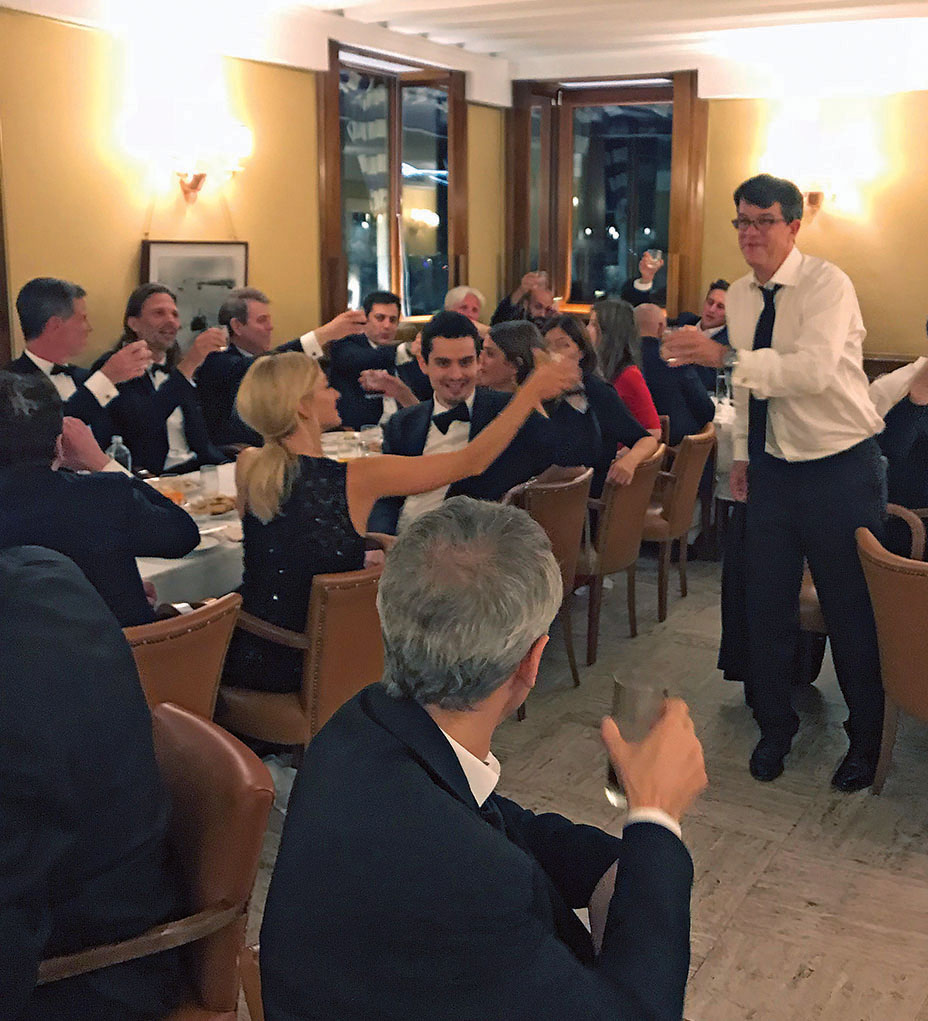 Thursday was The Mountain, a competition film directed by Rick Alverson and starring Jeff Goldblum and Tye Sheridan. Jeff and his wife, Emilie, who happens to be an Olympian and has a better workout plan than yoga or Pilates, celebrated with din­ner at Harry’s, hosted by Yasmin Ghandehari (a patron of the Tate in London), with producer Keri Selig, manager Keith Addis and Eve Gerber (who stopped by after A Star Is Born pre-mania; her husband, Billy, is a producer on the film). At another table was Spike Lee yelling, “Hey, big Jeff!” Harry’s during the festival is like a private club; you go there and bump into anyone who is in town. 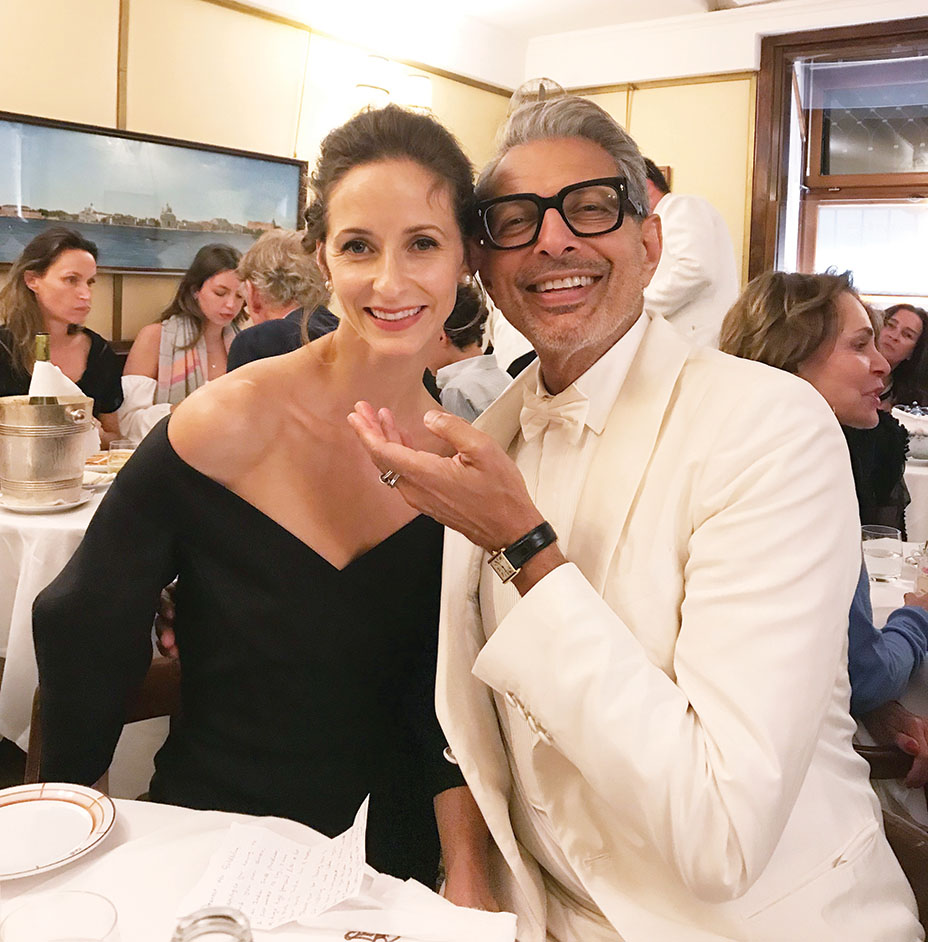 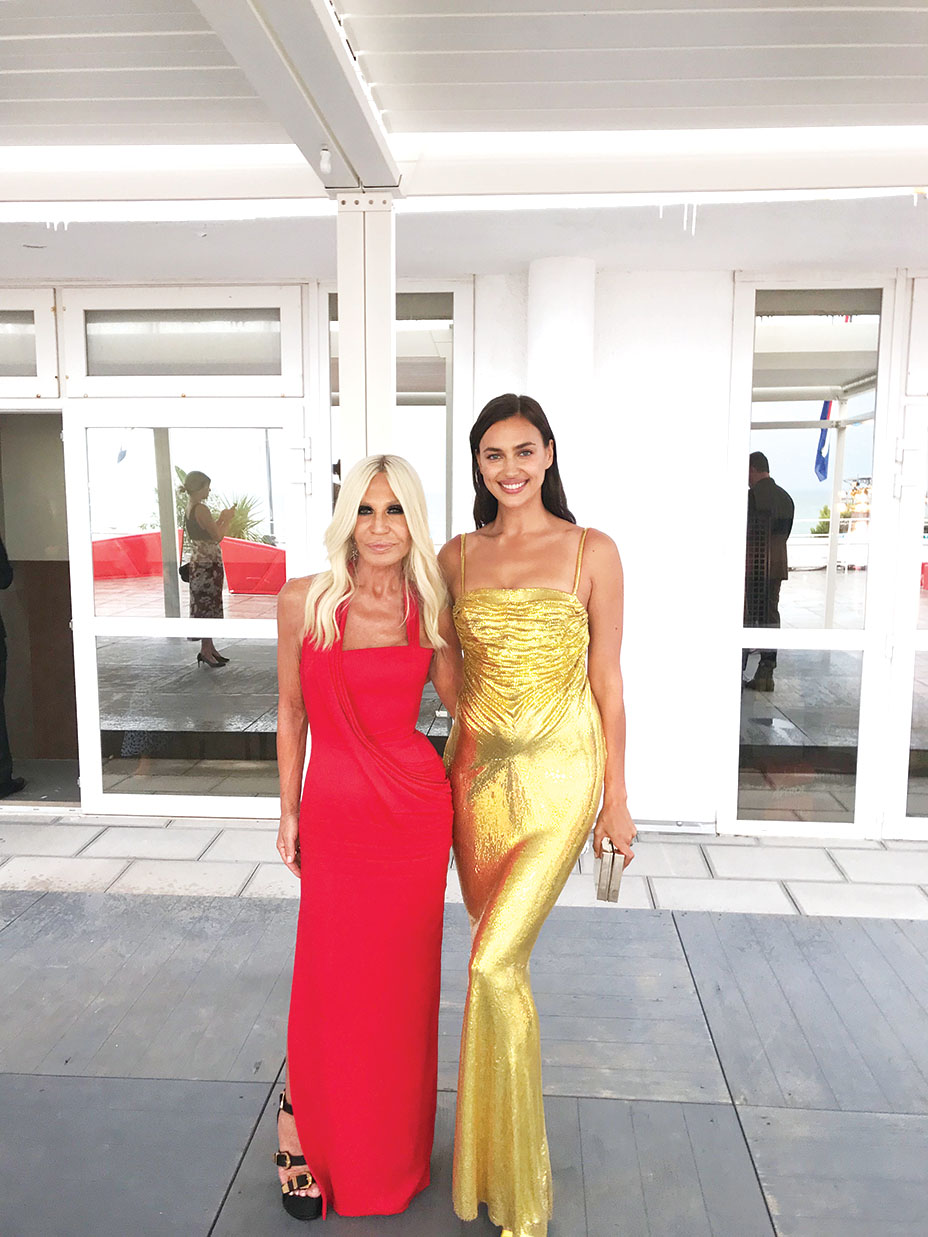 Friday the weather turned overcast with rain, but nothing could get in the way of the excitement for the world premiere of Bradley Cooper’s A Star Is Born (not even the screen going dark mid-film because of a lightning strike!). The most anticipated movie of the festival had two major stars and a story we all know but now was being directed by Bradley — who also sang and starred along with Lady Gaga making her acting debut. Gaga arrived with Bradley and gorgeous Irina Shayk, and the scene was electric. After that combustion of two stars colliding and laying themselves vulnerable, the dinner (at a private home across from the Gritti) was emotional. Billy Gerber said Bradley is the best he’s ever worked with.

A director is born. 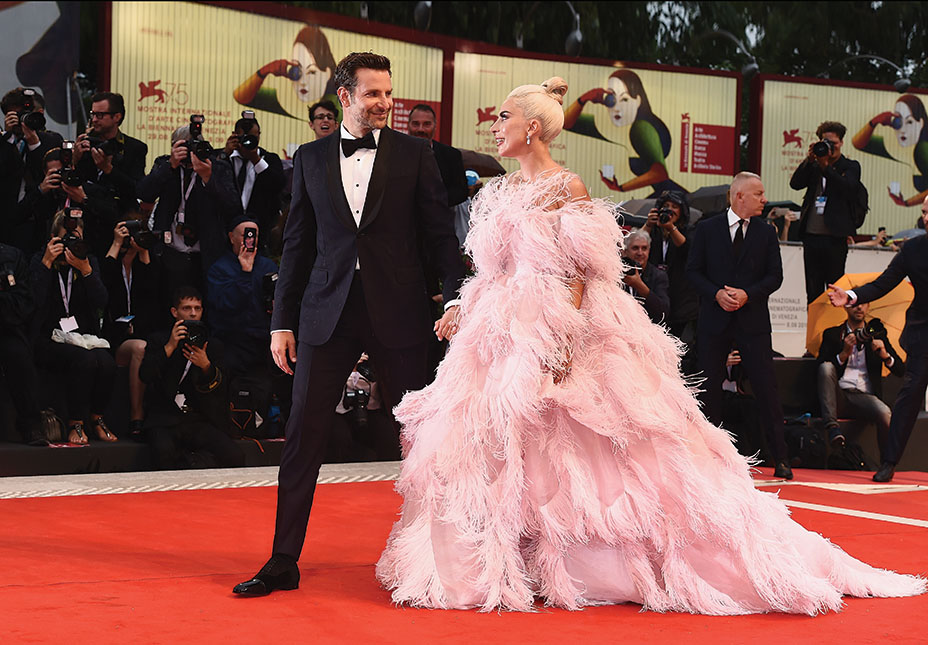 A Star Is Born feels like the movie that wins best picture. Leaving Venice, it was apparent the movie hit the opening weekend high point.

Flying into Cannes to see Caroline Grainge turn 30 twice, with family surrounding her, turned the next part of my trip into the How to Catch a Thief version of life: karaoke done with no shame with a birthday girl who looked 28 on a beach on the Riviera. Then to Paris for La Biennale for art and design, taking it in with Yasmin, one of the world’s top art collectors, and seeing it all through her eyes. After we had lunch with the Ambassador Jamie McCourt celebrating Mick Jones (of Foreigner) and Ann Dexter Jones’ one-year anniversary of their remarriage. The Paris hotels from the Plaza Athenee to The Ritz were full and bursting with fashion, life and laughter.

Venice: Lady Gaga on Bradley Cooper Bringing Out Her "Vulnerability" for 'A Star Is Born'

Countdown to my own WTF milestone birthday, to be hosted for me by 17 friends including Ambassador Nicole Avant, Cheryl Saban and Jennifer Stallone at Avra Beverly Hills: Remembering that Europe thinks in centuries, not decades, makes it all so worthwhile.