I will always associate my late pal Hugh Hefner first and foremost with classic movies. He called them the major influence in his life.

Vintage films consumed his life on a daily basis, whether he was watching, cataloging, discussing or writing about them. I discovered this in 2002, when I profiled him for Premiere magazine. He greeted me at the mansion in his silk pajamas and smoking jacket, and a scheduled one-hour interview turned into a two-hour gabfest as we bonded over the old-time movies and music we both loved. A day or two later, I returned for a movie night screening of Billy Wilder’s Love in the Afternoon. “Good at any time of day,” Hef said with a smile. He would later joke that I “never left.”

Over time I learned that Hef liked to collect friends who shared his passions and had interesting points of view to offer. One night Patricia Ward Kelly dropped by for An American in Paris, starring her husband, Gene Kelly, and stayed to talk with us as Hef and his then-girlfriends went out on the town; when they returned hours later — well after midnight, in fact — we were all still there in the dining room, talking about Gene Kelly. Hef laughed long and hard over that one, and Patricia became a regular guest.

But mostly, the movie night crowd of anywhere from a dozen to about 60 people comprised Hef’s long-standing friends: actors Don Adams and Chuck McCann, actresses Terry Moore and Colleen Miller Ralphs and director Elliot Silverstein, for instance. Other folks dropped in if they were connected to the evening’s movie: Producer Dana Brunetti came for showings of The Social Network and Captain Phillips; Martin Landau regaled us with stories at a screening of Ed Wood; film editor Anne V. Coates, director Vincent Sherman, Kevin Spacey, Bettie Page, Tony Curtis and Shirley MacLaine all turned up at one time or another.

A Reporter's First Visit to the Playboy Mansion: Everyone Got Naked

Occasionally it got bizarre. One night in 2005, as we watched Capote, a cellphone started ringing over and over. Eventually some of us realized it belonged to Mike Tyson, a guest that night. But he had fallen asleep. And nobody wanted to be the one to startle him awake!

Through it all, Hef was the consummate host. He laughed a lot on these nights, and when he wasn’t laughing, he was smiling.

Mansion movie nights commenced with cocktails and a buffet dinner starting at 5:30 p.m., with Hef calling “movie time” at 7. The nights were so important to him that he spent hours each week honing meticulous introductions in longhand (working from research notes supplied by his friend Richard Bann) that he would read aloud before the Friday movies. Saturdays brought more classics, and Sundays were for first-run movies, with 35mm (and eventually digital) prints supplied by the studios. 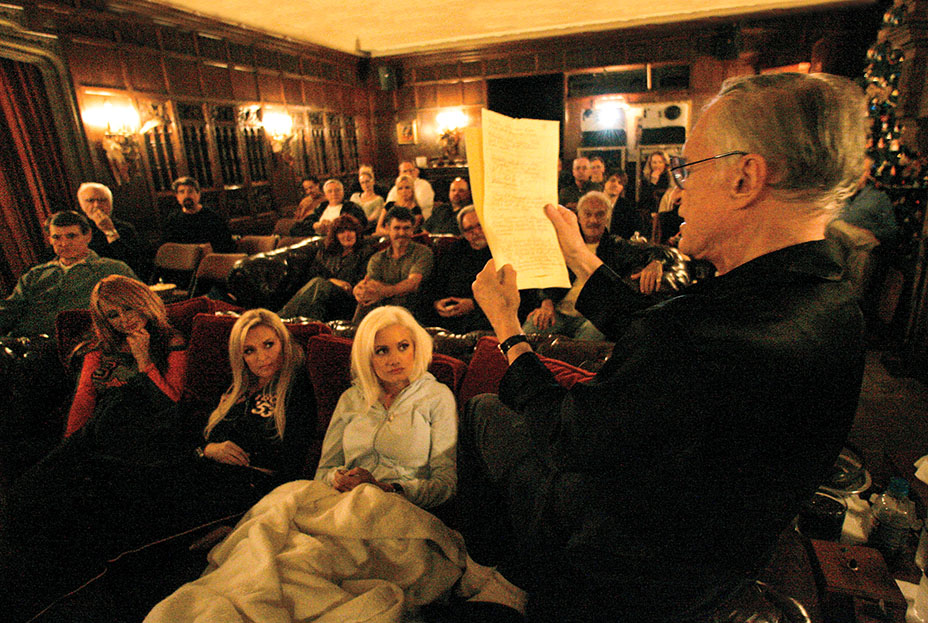 On Mondays, he convened a dozen close male friends for “Manly Night,” which I joined in 2012. The evening consisted of dinner; conversation about Old Hollywood, baseball, politics and anything on Hef’s mind; followed by any movie that we voted to see. The last Monday picture we watched with Hef was Alias Nick Beal nine days before he died.

Hef would say Mondays were for us, and he wouldn’t take part in the voting except to break a tie. But in truth, his favorites tended to be our favorites: the bread-and-butter movies of his childhood years. Typically we’d choose a film noir, a Bing Crosby musical, or maybe a Sherlock Holmes or Charlie Chan feature, though anything was possible. Showbiz documentaries, Radio Days and Marilyn Monroe made frequent appearances. Sometimes we’d begin with an Our Gang or Laurel and Hardy short or a vintage big-band soundie. More than once we screened the serial Flash Gordon, a chapter each week, whose leading lady Jean Rogers was a childhood favorite of Hef’s.

In fact, when he discussed his formative years, it was often through the prism of the films of that era. On his first date, he once vividly recounted, he took a girl to see Jesse James. His childhood crushes on Alice Faye, Deanna Durbin and Toby Wing were still potent at 91. He told me one night of being struck, at age 8, by the “eroticism” of Tarzan and His Mate and its vision “of living with your mate in harmony with nature and animals, an early fantasy for me.” Decades later, he had a private zoo constructed on the Playboy Mansion grounds, making that particular fantasy come true.

I Worked for Hef at Playboy for 34 Years (Guest Column)

But Hef’s favorite picture was Casablanca. Starting in the 1990s, he celebrated his birthday every year with a screening of that romantic classic. Guests all wore bow ties and white dinner jackets, or vintage dresses and evening gowns. And after the movie, the caviar and champagne flowed as it had onscreen, in a dining room transformed by candlelight into Rick’s Cafe. Casablanca Night was by far the most special night of the year at the mansion. Hef once invited star Paul Henreid’s daughter Monika to the evening; she shared her father’s tales to a room of captivated movie fans and became a frequent guest.

Beyond hosting his beloved movie nights, Hef was a serious force in the world of film preservation. He donated millions to the UCLA Film and Television Archive and George Eastman House to preserve such classics as The Lost World, The Mysterious Fu Manchu, The Benson Murder Case, the original cut of The Big Sleep, six vintage Sherlock Holmes films and several pictures made during the mischievous pre-Code era, including Too Much Harmony and Murder at the Vanities. He also endowed a film studies chair at USC and donated heavily to its School of Cinematic Arts. 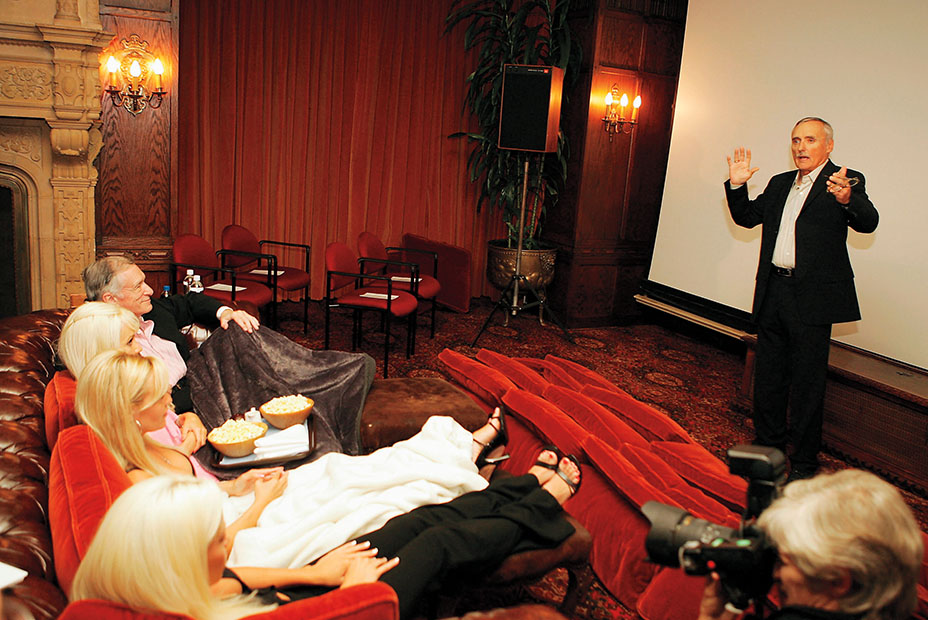 Hef saw film preservation as a way not just to help secure a vital but disintegrating American art form (more than half of all films made before 1950 are gone) but also to safeguard the screen’s enduring representations of America itself: its history, culture and dreams. Hef also was preserving his own dreams, forged by Hollywood’s most romantic era.

Ultimately, his movie nights represented the underlying reason for anyone to preserve films in the first place: so they can go on being exhibited to audiences. What Hef did along the way was turn his own handpicked audiences into a family that spanned decades. Just as Casablanca ends with “the beginning of a beautiful friendship,” Hefner’s life faded out with countless ongoing friendships in its wake. They can all be traced to a boy’s passion to hang on to the celluloid dreams of his childhood as he grew up into a kind and generous man.

Here’s looking at him.

Jeremy Arnold is the author of Turner Classic Movies’ The Essentials: 52 Must-See Movies and Why They Matter, and is currently a guest host on FilmStruck, the streaming service of TCM and Criterion.