“Most people, when they hear ‘clown,’ think American circus clown or horror film freaky, serial killer clown,” says John Gilkey, who founded The Idiot Workshop, one of Los Angeles’ three clown schools, in 2012. “The fact that people don’t really know what we do helps us; the mystique of it. Because they can’t describe it, they say, ‘Oh, you just have to go try this thing.’”

Along with The Idiot Workshop, Los Angeles is home to the Lyric Hyperion and The Clown School, all of which boast top-tier teachers and notable alumni working in film and television. With three well-regarded and established schools in the area, Los Angeles joins New York, San Francisco and other cities with performance-rich histories as a hub for clown education. Hollywood has a long history of famous clowns, from the Three Stooges and Lucille Ball to contemporaries like Steve Martin, Will Ferrell, and Sacha Baron Cohen, who trained with the renowned French clown Philippe Gaulier.

“In its simplest form, a clown is doing the simplest task in the most complicated, idiotic way,” explains actress and comedian Natalie Palamides. “An example is Lucy and Ethel when they’re at the chocolate factory [in I Love Lucy] and they don’t know what do to with all the chocolate passing them by. They can’t wrap them fast enough and they just shove them all in their mouths — a very idiotic, dumb solution to solving that problem.”

Palamides — whose Netflix special Nate, directed by Lyric Hyperion proprietor Phil Burgers, premiered on Dec. 1 — goes on to explain that her experience with a clown class in college was far from easy, noting the vulnerability required to be successful. “When I first started taking classes, I had a really big problem being vulnerable and connecting with the audience,” she says. “A really big part of clown is letting [the audience] see your soul, looking people in the eye. My teacher told me that if I wasn’t able to let my guard down and connect with the audience, I was very likely to fail clown class and it would bring down my GPA. He recommended that I drop the class, but I was so attracted to clown and I loved it so much.”

After college, Palamides moved to Los Angles and found that she missed clown while working in sketch comedy, so she discovered The Idiot Workshop and formed the group Wet the Hippo. With new members coming in as others exit — Palamides has since moved on — Wet the Hippo still performs and tours, directed live by Gilkey. 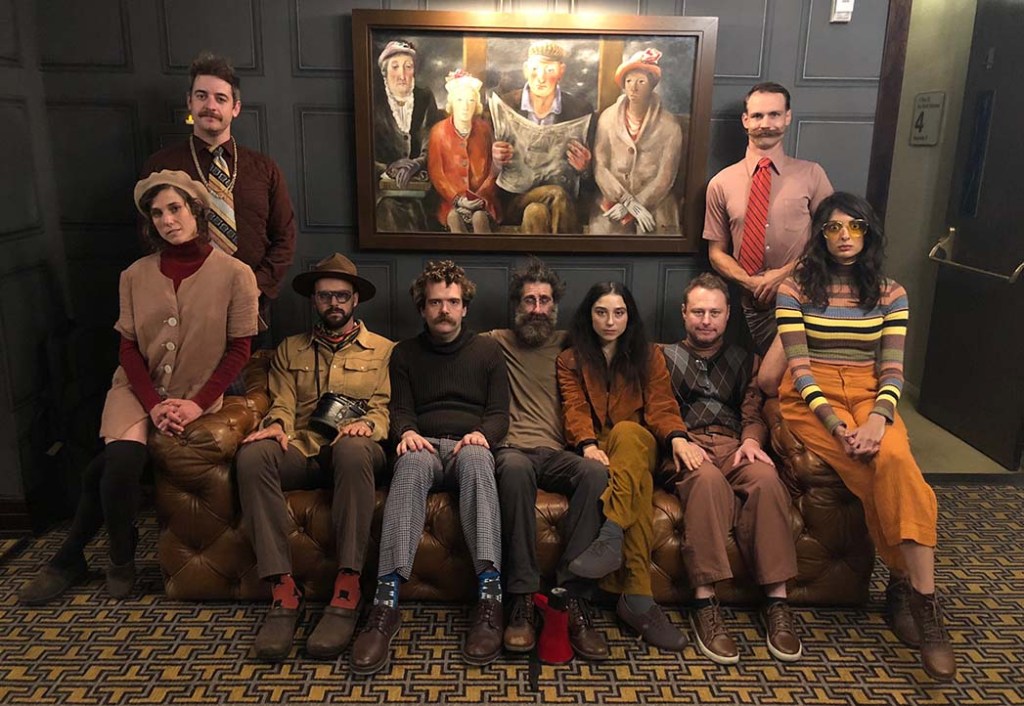 “A lot of people who have done improv for a long time start to, after a while, feel constrained,” says Gilkey — who began his career as a circus juggler before learning clown and working with Cirque du Soleil — of why he thinks so many performers turn to clown at some point in their careers. “In improv, there are a lot of constraints. There are a lot of rules. And, after a while, people start to yearn for a more open, creative opportunity and I think clown generally provides that.”

Gilkey goes on to explain the teaching style of Idiot Workshop, which counts Palamides, actress Meera Rohit Kumbhani (Netflix’s Uncorked) and recurring America’s Got Talent act Seth Allison, among its alumni, noting that some alums completed whole programs while others took single classes.

“The primary approach is focusing on the individual,” he says. “What’s unique about you and what’s funny about you is super important. So much of what we do is giving the students physical, sort-of-unsolvable challenges. They enter the stage, and they get one phrase — ‘This is me’ — and they have to only say that phrase and explore that phrase verbally and physically. The idea is that through the repetition and narrowness of the exercise demands that the person discovers new things. And having been put up against those limitations, the person’s personality comes through and then we point that out and help to identify and nurture that personality that emerges through the impossible challenges that we give.”

He continues, “We’re looking for your voice. Not your verbal, auditory voice. But your full personality voice, which is based on your vulnerability. What we teach is the boldness to be you at your wildest, most fun, crazy self and, once you open that up, you’re going to take that wherever you go as long as the medium you’re performing in allows for that expression.”

Unlike The Idiot Workshop and Lyric Hyperion, The Clown School is mainly a training institution and hosts far fewer public performances than the other two schools. It has been able to continue teaching through the pandemic with virtual classes. Clown is incredibly difficult to do virtually, and though some members of The Idiot Workshop have found ways to perform, it is far less frequent than before.

“Curious people will find clown school and it will satisfy their curiosity in unpredictable ways,” says David Bridel, who also studied under Gaulier. Bridel moved to Los Angeles in 2004 and unofficially started The Clown School in 2007, teaching workshops throughout the year with a tiered progression working up to a final performance. “It is an environment that’s not exclusively devoted to comedy, but it does involve a lot of vulnerability and collaboration and improvisation and spontaneity. Bearing all of those factors in mind, it makes sense that a performer from any of these worlds, whether it’s standup or mainstream or circus, would get something out of clowning, because we don’t force everyone into a red nose and a big pair of shoes. Rather we test and examine their capacity to be spontaneous and work in a troupe, and also to allow themselves to make fun of themselves, which is obviously a huge part of the work of a clown and is also very therapeutic to some people.” 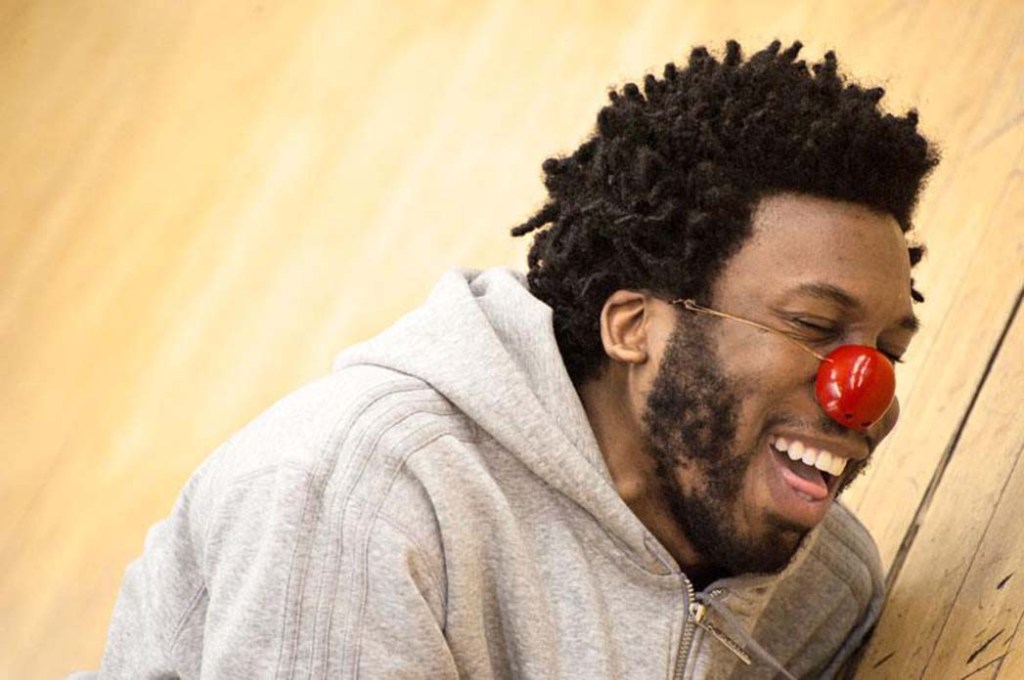 The Clown School’s alumni feature actors like Helen Slater (Supergirl), June Diane Raphael (Long Shot) and Matthew Gray Gubler (Criminal Minds), as well as famed stand-up comedian Emo Phillips and Vine star Manon Mathews. “I don’t think I would be the actor that I am without clown,” says Kumbhani, who stars in Fox’s Weird Loners and also teaches at The Idiot Workshop. “The thing about clown is that it’s so about who you are, it’s so intertwined with the journey of you discovering who you are. So much of clowning is the ability to stand on a stage by yourself with nothing and be everything that you are, meaning be everything that you are once you can shed all the things that you’re told that you are. If you can stand there without any safety or comfort and fully be there, that’s one of the biggest parts of being able to do this kind of work. It’s absolutely part of my acting all the time.”

A growing number of actors and performers are becoming interested in clown, and actress and managing director of The Idiot Workshop, Amrita Dhaliwal (YouTube’s Wayward Guide), explains that there is a timeliness to the art form.

“This idea of clown is evolving,” she says. “The art form is speaking to the time. It’s not uncommon to look at clown pieces from 100 years ago that were extremely popular, and they may not resonate today because there are elements of it that are universal but there are also elements that speak to the culture and the time.”

Bridel, on the other hand, attributes the rise in clown to the growing popularity of improv over the last 40 years. “That, I think, has had a kind of an impact on people’s willingness to explore clowning and understand that, just as with improv, you can train in this fashion, but it doesn’t mean you have to end up being a clown or an improviser for the rest of your life. It’s kind of a vocational training that can then be used in a variety of artistic or professional settings.”

But for Kumbhani, it’s the juxtaposition with Hollywood that makes clown school so attractive in Los Angeles. “L.A., on the surface at least, is very polished. Things look very polished; people look very polished and act very polished. But what’s underneath all of this? A lot of people in this town need an outlet for everything underneath that polish, need somewhere to go and scream and run around and just be an idiot, because nobody is above that. It makes them better actors and brings joy to their lives.”