While much of the world — and the entertainment industry — hunkers down amid the coronavirus outbreak, Jane Fonda continues to take to the streets with her “Fire Drill Friday” rallies, visiting San Pedro and Wilmington on Friday for her second California stop.

The two cities, sitting about 20 miles south of Los Angeles, are home to one of the biggest urban oil fields in the country and with extremely close proximity to homes and schools, many in the community have experienced respiratory problems and even cancer in some cases.

Fonda, along with friends and past protesters Lily Tomlin, Sam Waterston, Diane Lane, Rosanna Arquette, Lana Parrilla and Vanderpump Rules‘ Billie Lee, started the day at a San Pedro rally in front of Councilmember Joe Buscaino’s office,  delivering a letter asking to impose restrictions that oil wells must be at least 2,500 feet from residential areas, before moving to Wilmington for a march on local oil refinery Warren E&P.

With local and state politics embedded in much of the protest — including asking for California Gov. Gavin Newsom to halt future fossil fuel projects and the creation of new oil and gas wells — national politics were also a big point of conversation in the aftermath of Super Tuesday. Fonda, who previously told The Hollywood Reporter that she approved of Bernie Sanders, Elizabeth Warren and Tom Steyer’s environmental platforms, says that with the Democratic race now just down to Sanders and Joe Biden, she supports the former.

“Bernie is the climate candidate, he has a good plan, and because climate to me is the most important thing, I’m urging people to support the climate candidate,” she told THR ahead of the rally. Tomlin, meanwhile, said, “Bernie hasn’t really put out a specific plan, but I know he’s very much on the right side of that issue. I don’t know about Biden, I’m not sure that he is. I feel like Elizabeth was and she probably had a real plan, and Elizabeth is the person I was pulling for. Of course, now we’ve lost her for the moment.” Of the remaining two candidates’ climate change policies, she added, “I don’t know what we’re going to do. I hope they do enough.”

Waterston, the self-declared “moderate” in comparison to his Grace and Frankie co-stars, said that he was a supporter of Michael Bloomberg, who has now endorsed Biden since dropping out of the race.

“I hope, expect, and for whatever small impact I can have, will advocate for [climate change] being at the absolute top of Joe Biden’s agenda,” he told THR. “I think it’s actually a winning strategy, I think people are very ready to hear; this is the one great issue of our time and we’re going to go at it. I think all of the other issues of our time, and there’s lots of them and they are terribly important — it’s not that they pale by comparison, it’s that they all get impact and importance from their connection to climate change.” 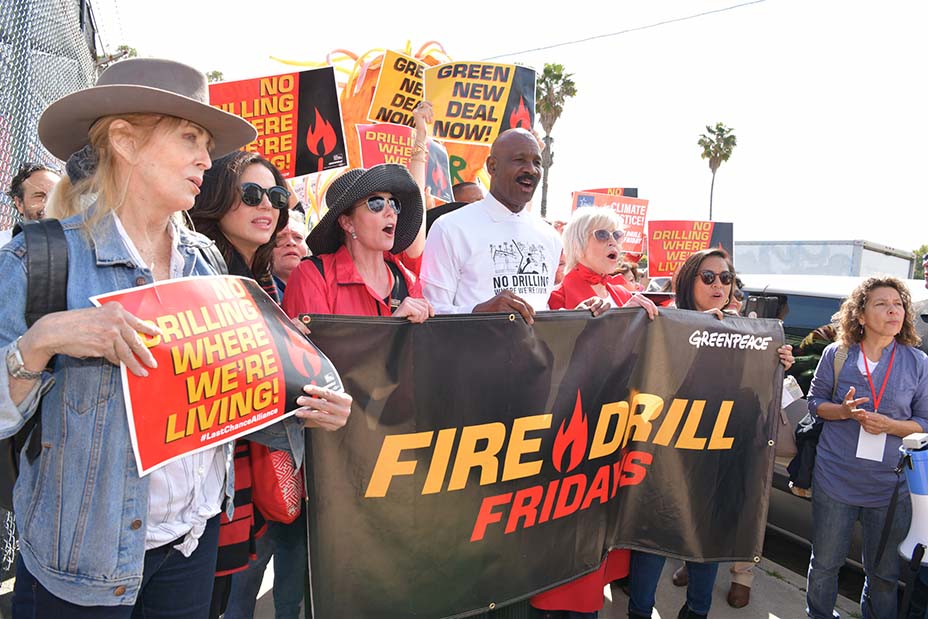 For this week’s “Fire Drill Friday,” which Fonda is taking to cities all over the country after spending 14 weeks protesting in Washington, D.C., THR tagged along with the actress and activist throughout her day of action alongside her collaborators at Greenpeace.

To kick things off, dozens of supporters and “Fire Drill Friday” staffers gathered in a San Pedro ballroom — most wearing red to mirror Fonda’s now-iconic coat — to lay out the day’s schedule, take a pledge for nonviolence and discuss what would happen at the oil refinery march, where Fonda was not allowed to physically take part in the protest following her number of arrests last year. “The judge in D.C. said I had to have three months with no arrests, so I can risk arrest again in May,” she said.

Fonda, Tomlin, Waterston and Lane mingled with many of the activists ahead of the 11 a.m. rally — opting for elbow bumps instead of hugs and handshakes amid coronavirus concerns — as Fonda celebrated how though her A-list friends came out to support, the stars are not the centerpiece of the event. “One of the things that I really like is that the celebrities aren’t making speeches themselves, they’re introducing the people whose voices aren’t usually heard,” she said, as Tomlin chimed in, “Jane is a premiere friend and I like to be on her side of any issue, but when you see all these people come out, especially during the corona, and just here because they have the spirit to be here, that’s sort of moving and terrific. I want to be here to put in my two cents.”

After everyone was gathered and briefed on the day’s guidelines, the group gathered for an anti-oil well chant that Lane had written on the drive, which Arquette exclaimed, “That was a good one!” They then walked a few short blocks to San Pedro Municipal Building, where Councilmember Buscaino works, to hold the rally, teaming the stars with activists to speak about the need to stop drilling for oil so close to residential areas and the health issues that have resulted. Fonda closed the hourlong rally, which was streamed live on social media, with, “Are you angry? I hope you’re friggin’ angry!”

For the second part of the day, Fonda, Lane, Arquette, Parrilla and Lee loaded onto one bus with several Greenpeace staffers to head to Wilmington, as they cheered the success of the rally and shared environmental articles. On the short ride, police helicopters started following the buses to see where they would be holding their protest, not knowing the group was headed to the Warren refinery. The buses took roundabout paths to the oil well in order to try to throw police off and stall for more time, as “Fire Drill Friday” staffers coordinated with each other to make sure the buses would all arrive together and show up in large numbers.

While on the trip to Wilmington, the bus also took part in a “toxic tour” of the area, seeing pollution and container graveyards from the nearby port and oil drilling sites set up in church parking lots and right next door to family homes and schools. With the police helicopter still circling, the buses arrived at the location of the march (where dozens more police cars, motorcycles and drones waited) to upwards of 100 activists taking part in the protest. Fonda led the march around the large square surrounding the refinery with a “Fire Drill Fridays” sign before dozens of activists joined together to block the entrance to the refinery so oil trucks could not leave or come in. While police kept a close eye on the area, they allowed the civil disobedience to continue and did not make any arrests.

Fonda’s message, though, stayed the same: “Let’s raise a ruckus.” 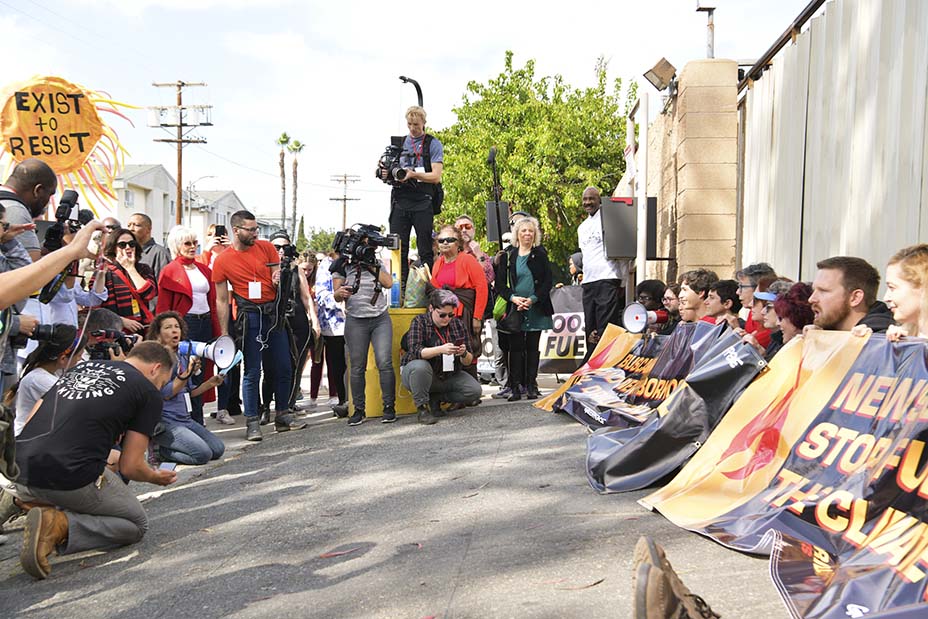