The ACLU of Southern California’s annual Bill of Rights Awards gala on Sunday evening was a star-studded affair with honorees such as Viola Davis, Gina Rodriguez, Jane Fonda and Judd Apatow, but it was Colin Kaepernick who received the loudest applause.

“He’s been viciously and unfairly criticized,” said ACLU Southern California’s executive director Hector Villagra. “He’s been called a traitor because too many people in this country confuse dissent for disloyalty. He took a stand knowing some would threaten him and he has had his life threatened, which is why we are profoundly honored to have him here [and] we didn’t publicize his presence tonight.”

When Kaepernick hit the stage, the audience jumped to its feet. “We must confront systematic oppression as a doctor would a disease,” he said. “You identify it, you call it out, you treat it and you defeat it. We all have an obligation, no matter the risk and regardless of reward, to stand up for our fellow men and women who are being oppressed with the understanding that human rights cannot be compromised. In the words of Frederick Douglas, ‘If there is a no struggle, there is no progress.'” 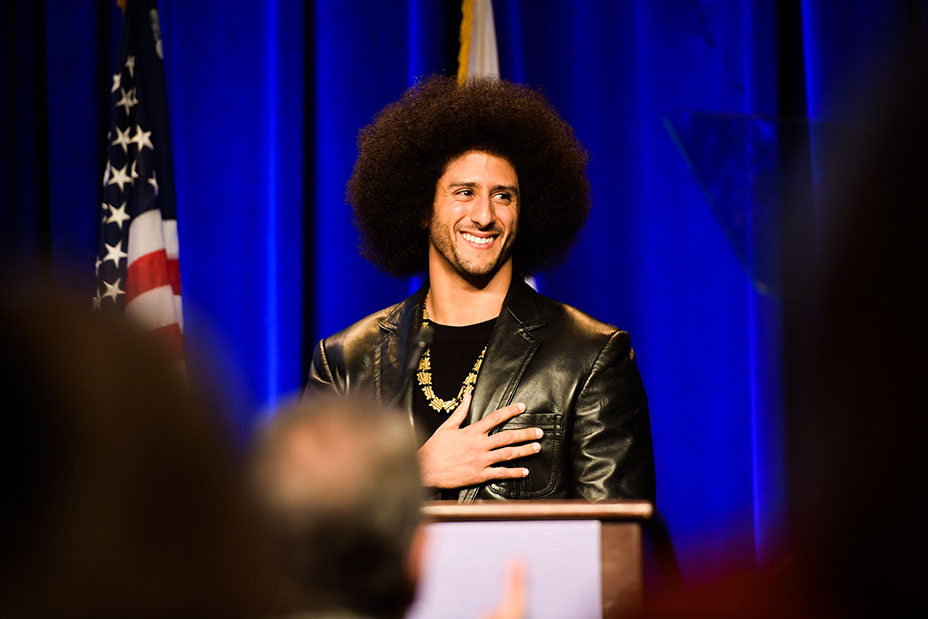 Kaepernick received a second standing ovation before Billy Eichner came onstage to present a Bill of Rights Award to Apatow. “I have to follow Colin Kaerpernick?!” Eichner joked. “I didn’t even wear the ACLU ribbon at the Emmys because it didn’t match my tuxedo, which I feel terrible about now, by the way.”

Apatow delivered more of a politically charged stand-up act than an acceptance speech, which included his hope that the alleged “pee tape” of President Donald Trump would be released.

“But if there is a pee tape, then who becomes president? Mike Pence,” Apatow said. “Then we need another pee tape, maybe of Trump sitting next to Mike Pence. So, we need another pee tape because then who becomes the president? Paul Ryan. … We basically need a tape of a Russian hooker urinating like a firehose on, like, 40 Republicans until we finally get Bernie Sanders.”

Davis, who was presented with a Bill of Rights Award by California Democratic Rep. Maxine Waters, struck a much more serious tone, recalling her childhood growing up in abject poverty.

The How to Get Away With Murder star and Oscar winner told a story about the time her father was suffering from gall bladder problems.

“He had an infection and he walked three miles to the hospital in 12-degree weather and got to the hospital to sit for another five hours before the doctor said, ‘You got to go home, you look like a drug addict,’” Davis said.

“He leaves the hospital,” she continued. “He walked three miles back home. He sits for another three days before gangrene start setting in and he walked back to the hospital and they finally admitted him. That is the dignity being taken away from you when you don’t have any money. You don’t have access to healthcare. You have no food. I scurried in garbage bins for food. I have fallen asleep within 10 minutes of being in school because I had no food. I would walk to school in shoes that had holes in the bottom, so by the time I got to school, I literally was basically walking in my socks.”

The actress said she is committed to working and fighting for the 46 million Americans living in poverty today. “I have two mottos for 2017 and they are, ‘I’m doing the best I can’ and ‘I’m gonna leave it all on the floor,’” Davis said.

Rodriguez was honored for her advocacy work on behalf of women’s and immigrants’ rights.

Additionally, political commentator and Democratic strategist Van Jones was on hand to present an award to longtime producer Reginald Hudlin, whose most recent work is Marshall, a biopic about the country’s first black Supreme Court justice, Thurgood Marshall. Dolores Huerta was given the Lifetime Advocate for Justice, and Martin Sheen presented the Ramon Ripston Liberty, Justice & Equality Award to his Grace & Frankie co-star Jane Fonda.

Fonda added that she was thoroughly impressed seeing Kaepernick. “Colin,” she said at the start of her remarks, “you are woke!” Fonda ended her speech by telling him, “Keep kneeling until you can stand up!”

The evening also included a Johnnie Walker-sponsored performance from Common and Andra Day singing the recently Grammy-nominated “Stand Up for Something” from the Marshall soundtrack.