Jasper Johns wasn’t at the Broad. The 87-year-old artist who embodies so much of what we know about art today stayed home on his island farmhouse outside of Sharon, Connecticut. He doesn’t venture out much these days, and when he does, it’s not far. Not even to help launch “‘Something Resembling Truth,’” opening Feb. 10, his first Southern California museum survey since 1965, more than 50 years ago.

Several of his flag paintings — conceived of in a dream, and perhaps some of the best-known paintings by a living artist — hang on the wall, including “Three Flags,” (1958) loaned to the Broad by the Whitney, which almost never loans this work out due to its fragile nature.

The flags, target paintings, number paintings and small bronze sculptures are collected in the thematic section “Things the Mind Already Knows.” These are what Johns is most famous for and what make him, along with Robert Rauschenberg, such an important artist. Johns was considering objects that are familiar to us, both things we consider too much, and things we don’t consider enough — a flashlight, a coat hanger — and giving them a whole new perspective in which to endure.

“What makes him so relevant now is that we live in a world that is so fast, and we receive thousands of images a day, that it’s of great benefit to see paintings that want us to slow down, study them and reflect on them,” says the Broad’s associate curator Ed Schad, who co-curated the Los Angeles version of the show with the museum’s director, Joanne Heyler. The show was co-organized with the Royal Academy of Art in London, where it will travel after it closes in mid-May.

Other sections of the show include “In the Studio,” “Words and Voices” (which includes a collaborative book project with Samuel Beckett), “Fragments and Faces,” and “Time and Transience,” which includes Johns’ crosshatch series, inspired by a pattern the artist glimpsed once on a passing car. It is from this series “Untitled” (1975) that Eli and Edythe Broad first purchased a work by Johns; they would go on to purchase more than 40 others, including “Flag” (1967) and “Watchman” (1964), a painting upon which Johns affixed a plaster cast of his friend’s leg on half a chair, upside down sticking out of the painting like it had just crossed over from another dimension.

“His works are sensuous and reward the eye,” said Heyler in opening remarks at a Feb. 7 preview of the exhibition, “but they also keep the viewer’s mind spinning.”

These are paintings and sculptures that Johns, who was bestowed with the Presidential Medal of Freedom by President Barack Obama in 2011, has denied to explain through the decades. Perhaps part of Johns’ mystique is that the subject matter is so loaded, but the context is just out of reach.

Still, it’s comforting to know he’s in Sharon, probably keeping tabs on things from afar. Many of his peers — Rauschenberg, John Cage, Merce Cunningham — are gone. He’s there, still painting, still elusive. (He did only one brief interview for the show — with his biographer, Deborah Solomon — for The New York Times.) 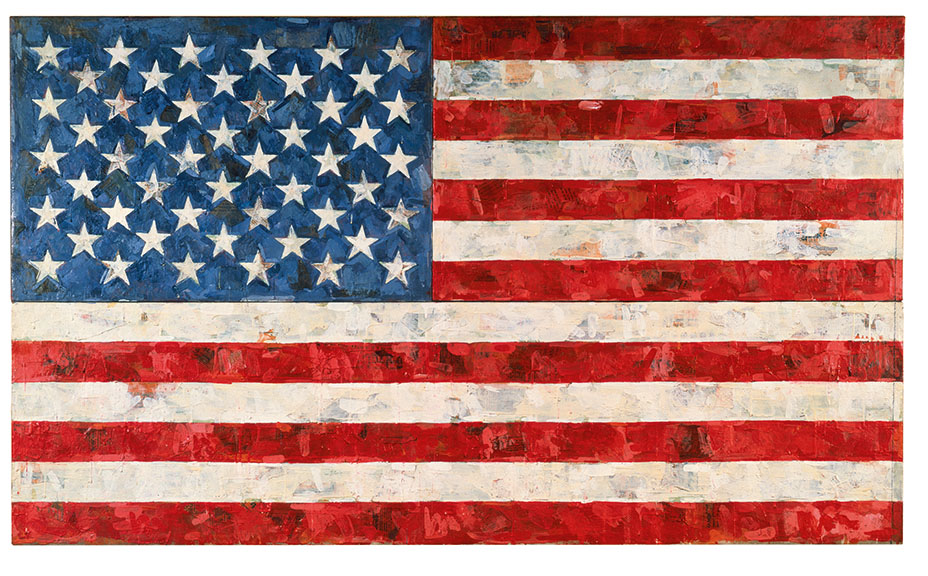 “We sent a wooden model [of the proposed show] to his studio,” says Schad of his brief interactions with Johns, “and took a drive up from Manhattan, and over the course of the morning worked out all the details. He’s a man of few words. He just stood over the model, and made some tiny revisions. I’m still trying to catch up to some of the changes he made.”

Johns is known for being the current highest-valued living artist, by far. His works have gone for $80 million in 2006 — sold by David Geffen to collectors Anne and Kenneth Griffin — and a reported $110 million in 2010 — sold by Christophe Castelli (son of famed art dealer Leo Castelli) to embattled hedge fund manager Steven A. Cohen, who was charged by the U.S. Security and Exchange Commission with failure to stop insider trading at his firm in 2013.

Johns was caught up in a scandal of his own a few years prior, when a longtime former assistant stole dozens of paintings from his studio over 25 years, and sold them at a gallery. James Meyer was sentenced to 18 months in prison in 2015.

Though Johns won’t be coming to L.A., he maintains a longstanding relationship with L.A.-based printmakers Gemini G.E.L., Schad says. “Not only that, but I do a lot of studio visits, and I very quickly learned that the slightest scratch of a conversation will lead you to how much Johns meant to so many artists here … Ed Moses, Joe Goode and, of course, Ed Ruscha would all say they owe him a great deal.”