Surrounded by friends and family, Jimmy Kimmel on Friday night hosted the grand opening of his comedy club at Las Vegas’ Linq Promenade.

“It’s so exciting to be doing this,” Kimmel said to the crowd under the marquee lighting as hundreds of fans gathered. “This is something I never imagined would happen growing up in Spring Valley, which is now Chinatown, only about two miles from here. My wife is here; Cleto, my best friend [and bandleader]. We grew up across the street [from each other]. We spent a lot of time on this very Strip torturing tourists, and now we can welcome them into this club. It’s quite wonderful. When we open this club, hopefully it will be around for many, many, many years after my death.”

Making of 'Live in Front of a Studio Audience': "It Was an Exhausting Time, and We Wanted to Just Have Fun"

Later, the host of ABC’s Jimmy Kimmel Live! told The Hollywood Reporter that he called on many of his colleagues during the design process to ensure that this was the type of club where comedians would want to perform.

“If you’re not a comedian, you might not understand the subtleties that make a room bad, fair, good, or great, but what I did was I had very detailed conversations with other comics. I asked them, ‘What do you look for? What makes a room great?’ A lot of them had the same answers, and I tried to come up with all the best suggestions and integrate those into this club. That’s the sound, the seating arrangement, the height of the stage, the height of the ceiling, the way the food is served,” Kimmel explained. “We have no utensils in this club, so you won’t hear noise when people are eating. Our servers have been trained to serve in the least intrusive way possible. These are all boring things to the general public, but to comedians they’re meaningful.”

JKCC is split between two levels. Audiences enter the ground floor space, which resembles a comfy parlor with a large bar, a merchandise space and memorabilia from Kimmel’s career, including puppets from Crank Yankers, the neon sign from The Man Show, photos with his JKL guests like David Letterman and books by fellow comedians such as Howard Stern, Kevin Hart, George Carlin and Don Rickles, whom Kimmel holds in highest regard.

“The best [comedy show I ever saw in Las Vegas] was Don Rickles. It was later in his life and I think he was at The Orleans, but it was a lot of fun, and I got to hang out with him backstage afterward,” Kimmel recalled. “To see him do a full show is something that I always wanted. I’d watch him on [The Tonight Show] when I was a kid. Growing up here, I was too young to go to a show like that, so to come back as an adult and to be able to see him and to drink vodka with Don afterward was a real thrill.” 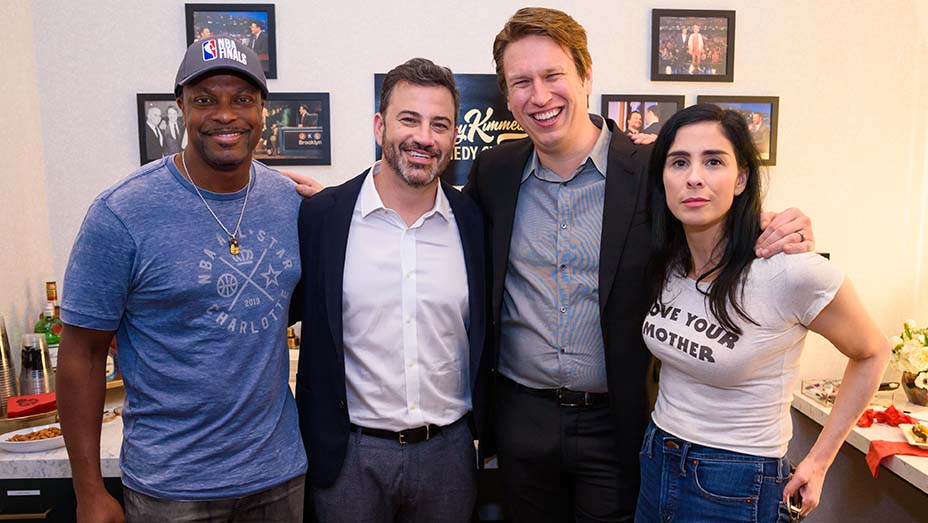 And since nothing goes better with comedy than cocktails, libations at JKCC are themed after references to JKL and his hometown with names such as the Guillermo, Cleto, Top of Sahara and Jerry’s Towel — a reference to beloved University of Nevada Las Vegas Runnin’ Rebels basketball coach Jerry Tarkanian. Upstairs in the club, there is row seating in front of the stage, and tables of varying heights in the middle and back for food service.

As the city’s residency market becomes more and more flooded with live music, Wynn Las Vegas has recently had tremendous success with sell-out nights booked by AEG from the likes of Chris Tucker, Sebastian Maniscalco and Jo Koy. Tucker now lives in Las Vegas, and Koy also grew up there and owns a restaurant on the city’s west side. JKCC will take advantage of the boon and introduce audiences to a true comedy club setting — one that doesn’t currently exist as it does in Los Angeles or New York. 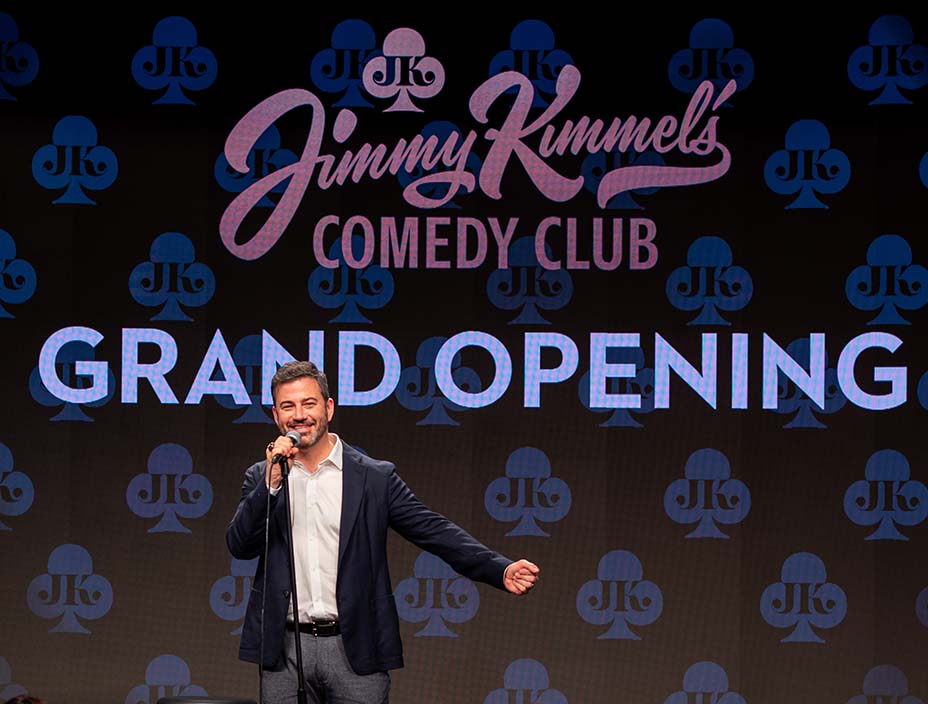 “The thing about a comedy club is you’ve got a different comedian headlining every weekend, and they’re different types of comedians — they have different audiences,” Kimmel said. “I don’t think we will cater to one particular audience, but our goal is just to get the funniest people possible, new comedians, veteran comedians, and bring them together here. Really, we’re not looking to reinvent the wheel, we just want to do it in the best possible scenario. And I feel like this club is hopefully perfect for comedians and for audiences.”

Kimmel, who grew up in Las Vegas and made his entertainment debut as a radio DJ at UNLV, said that his greatest wish was to give local kids an opportunity to explore the profession close to home — something that wasn’t available to him.

“When I was growing up, really, there weren’t any comedy clubs in Las Vegas. You had to go to L.A.,” said Kimmel. “I will say my greatest hope for this club is that there’ll be some kid who lives in Las Vegas right now who wants to be a comedian, who becomes a regular here at [open] mic night and who then, in 15 years, tells me, ‘I started out at your club,’ and really, that would be very exciting.”

So would we ever see a Kimmel residency at one of Las Vegas’ large theaters, a la Jerry Seinfeld at The Colosseum at Caesars Palace? For now, he says, that is not going to happen.

“I’m doing a show for 46 weeks a year, so that’s not a realistic goal for me. Those few weeks I have off a year, I need to recover,” said Kimmel.

Demonstrating that his love for his hometown knows no bounds, Kimmel will also donate all the profits from the comedy club to Las Vegas charities. 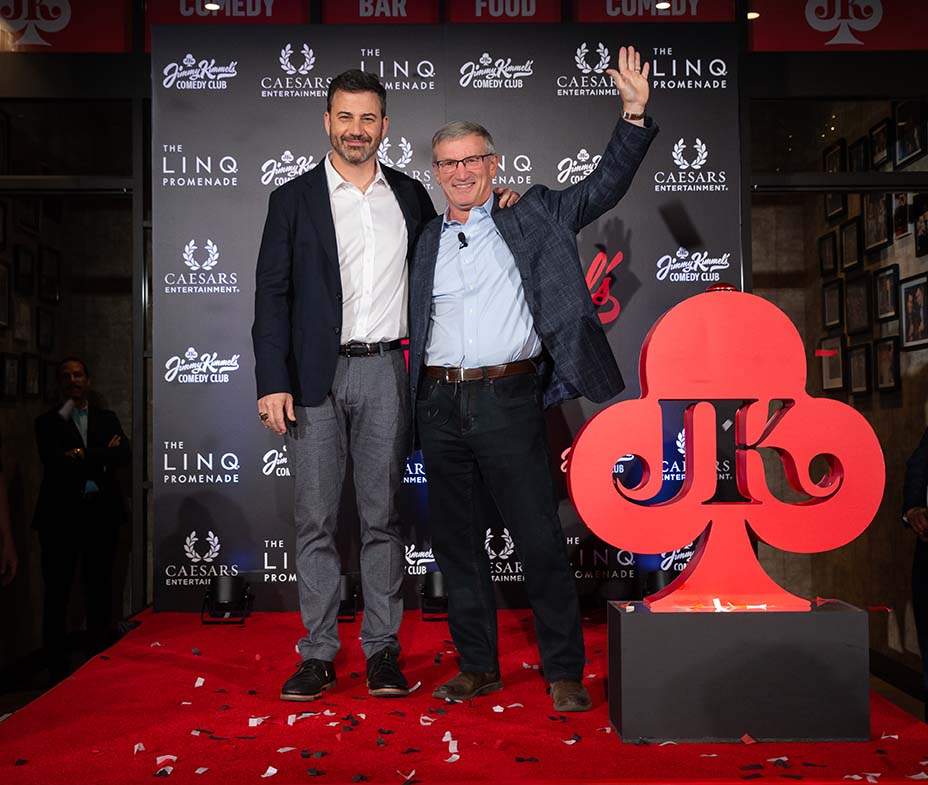