Times of political turmoil are always propitious for mounting productions of Julius Caesar, a solid performer in the Bardic canon that with typical Shakespearean slipperiness can be tweaked to reflect whatever political situation is at hand. Last summer, the New York Public Theater production cast its Caesar with orange hair, a long red tie and Donald Trump-style hand gestures, and bingo, instant outrage from right-wing crackpots who saw the 418-year-old play as a terrorist-style plot to inspire political assassination.

This latest Julius Caesar production, directed with typical fluency and flair by the eminent Nicholas Hytner at the Bridge Theatre that he co-founded, is not without its Trumpian echoes, including red baseball hats sold as merch in the promenade that say “CAESAR” instead of “Make America Great Again.” (When the crowd at Mark Antony’s funeral oration implores him to read Caesar’s will, you half-expect to see a sign raised with #ReleaseTheWill emblazoned on it.)

But by and large, the semiotics of this modern-dress production are more neutral and non-partisan, referencing more the ongoing volatility in the U.K.’s own government rather than the flashier disruption unfolding across the pond. With their resolutely Received Pronunciation accents, sober navy and gray suiting and neatly folded scarves tucked into dress coats, the chief conspirators Marcus Brutus (Ben Whishaw) and Caius Cassius (Michelle Fairley) and their cohorts look like the kind of anonymous spin doctors and plotting undersecretaries you’d see at the edge of the frame behind the leader during a stump speech, applauding dutifully when necessary but otherwise inscrutable. 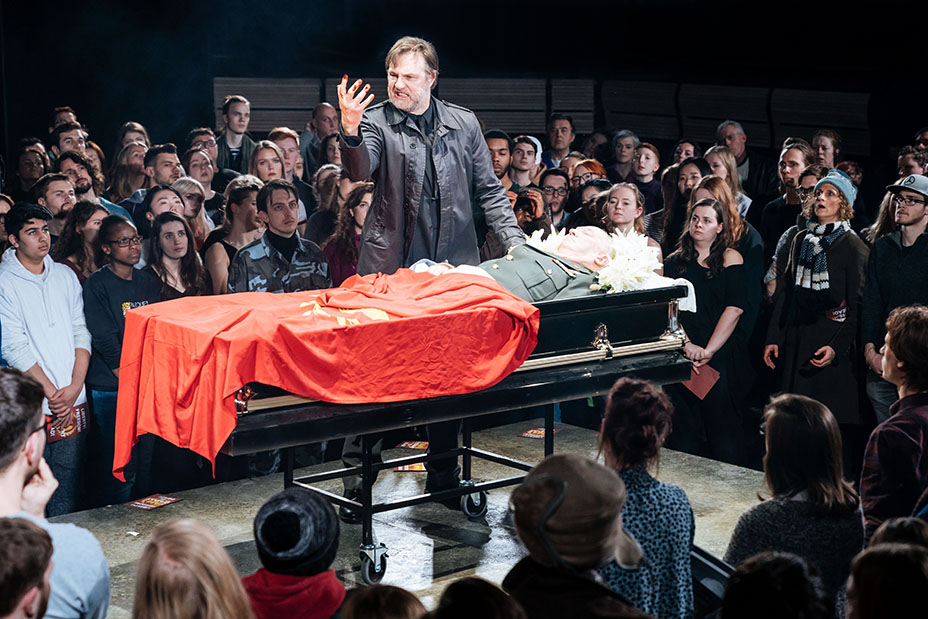 It would have been so easy for Hytner to have cast a woman as Caesar to reference the current travails of Prime Minister Theresa May, who as the play opened this week looked like she was on the brink of being pushed out. Likewise, it would have taken just a few costume tweaks and other refinements to make the ensemble players evoke zealous Brexiteers or angry Remainers as they mingle among the audience standing in the promenade at the Bridge. In that mosh-pit-like open space, viewers are often roughly jostled as the actors charge unexpectedly in and out from offstage while platforms rise and fall from the floor as needed.

To be honest, the production’s generic quality and lack of reference to the spicy current events unfolding every day in the political scene are a little disappointing. I was rather hoping Brutus or Cassius would be played as a bumptious Boris Johnson lookalike, although such a comparison would probably be far too flattering to Britain’s current foreign secretary. Instead, they’re more like Tony Blair or Edward Miliband types, earnest but with an edge and hopelessly flawed.

Hytner and the cast have cleaved to a drier, more cerebral interpretation of the play, homing in on the text’s emphasis on rhetoric and the pliability of ideology. That’s illustrated particularly pleasingly during the febrile oration from Mark Antony (a dynamic David Morrissey); his famous insistence that he comes not to praise Caesar (David Calder, maybe exuding a vaguely Jeremy Corbyn-ish vibe) evolves by degrees, surprising even Anthony himself, into what’s effectively a call to arms.

Similarly, Brutus’ own position shift from right-hand man to conspirator is a gradual drip-drip evolution, one clearly thought out. Whishaw is one of the great onstage cogitators of his generation, a performer highly skilled at projecting micro-emotions rippling under the surface when he’s doing little more than standing still and listening. Those with the cheap tickets who opt to stand for two hours on the promenade are thus rewarded by being able to get closer to study his reactions. 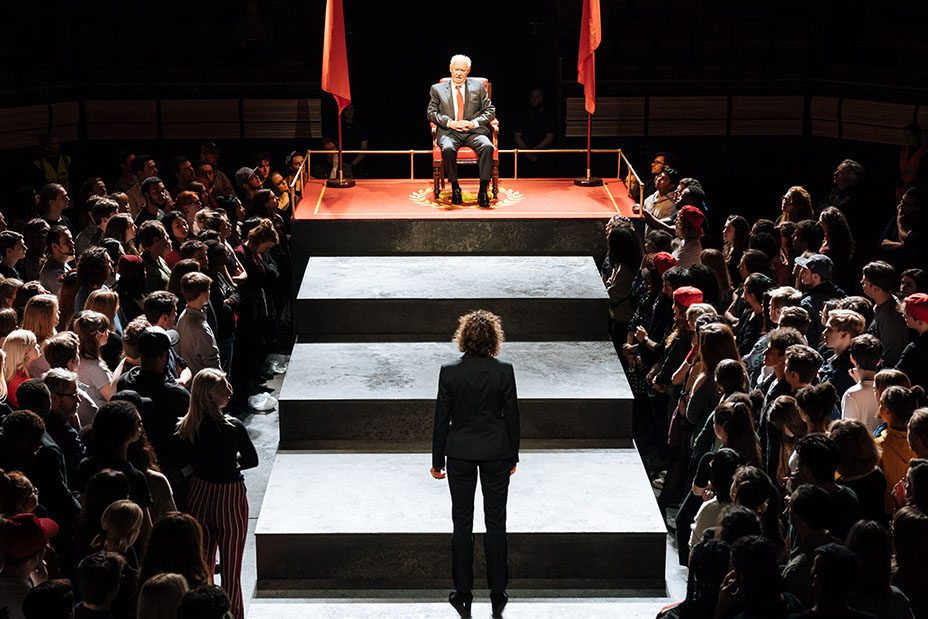 If that tactician’s cunning comes pre-baked into Brutus’ dialogue, Hytner and Whishaw elect not to tinker with it much. Whishaw does bring a tenderness to the role, especially in the touching scene toward the end where he mourns the suicide of his wife, Portia (Leaphia Darko).

Fairley’s Cassius is played more against the textual grain, and not just because of the gender-blind casting. Projecting a fierce, republican (in the original sense) fidelity, her Cassius comes across as a crusader for the people’s rights, maybe with a little dash of feminist ire. If her palm is “itchy,” as Brutus accuses her later when it’s all a blame game and circular firing squad, it’s itchy to smack the authoritarians.

Luckily, Fairley (best known for Game of Thrones) has the vocal range and physical presence to pull this off. In some ways, hers is the show’s standout performance, although it’s a close-run race with Adjoa Andoh’s delightful Casca, slipping just slightly into a Caribbean accent in order to give the character an extra ounce of sass as she talks frankly about her doubts regarding Caesar. She easily gets more laughs than anyone in the cast with just the slightest comic spin on a single word.

Production designer Bunny Christie opts for starkness with a restricted palette of grays and reds, the set alternately proto-fascist minimalist in the early acts and then a landfill of tatty furniture, detritus and broken dreams for the final battle. As with many Julius Caesars, this final stretch is kind of a hard slog that has to be sweetened with a lot of noise, but it’s stage-managed effectively enough. The production will be broadcast March 22 by NT Live.