Anonymous street artist Plastic Jesus crucified Kanye West on Wednesday morning at the corner of Hollywood and La Brea, where he installed his annual rip on the Oscars just days before the ceremony on Feb. 26.

This year’s takedown was erected under the familiar art deco sculpture that marks the intersection, and features a life-sized version of the familiar gold Oscar sculpture crucified on a pedestal reading “False Idol.” Replacing the usually faceless figure is the likeness of Kanye West wearing a crown of thorns, though some tourists had trouble recognizing the pop star.

It happened quickly at around 10:30 a.m. PT, when a pickup parked in a nearby lot and artists carried the work in pieces through the crosswalk, assembling it in a matter of minutes. Few seemed to notice, though tourists paused for pictures with the piece, unaware that it was anything out of the ordinary. 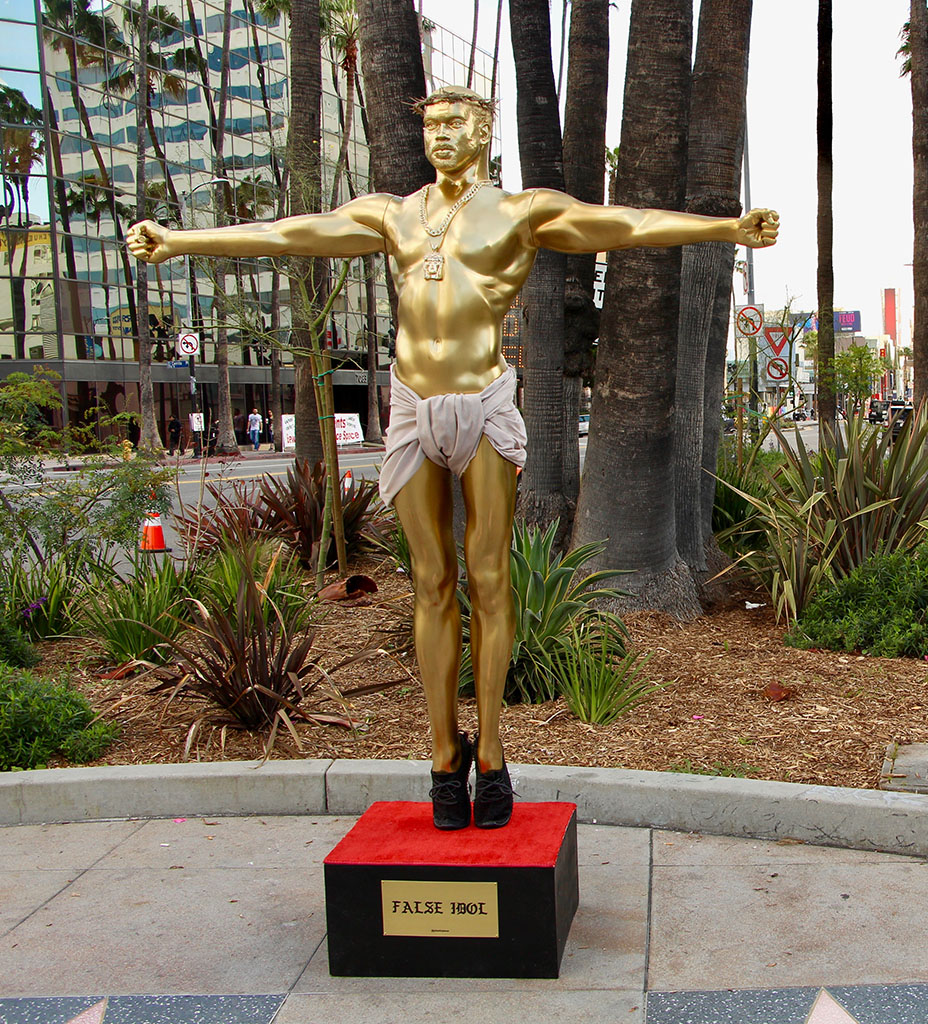 “Kanye is a genius. He is a brilliant writer and producer, but we’ve built him up to a god-like idol,” the anonymous artist tells The Hollywood Reporter. “Look at what happened to him at the end of last year when he went into a mental facility suffering from anxiety, stress and, I think, depression.”

For the fourth year in a row, the statuette is the basis for the artist’s commentary on the entertainment industry and its excesses. Four years ago, a similar sculpture appeared, with the familiar art deco gold man standing up right with a needle in his arm, commenting on actor Philip Seymour Hoffman’s overdose. The following year featured Oscar on all fours, snorting lines of cocaine off a red carpet, and last year a he became a she – a stripper wearing only pasties and a G-string stuffed with cash.

“The Oscars is a great celebration of Hollywood and the movie industry in general,” explains the artist. “But let’s not forget about some of the underlying stories that are there within the movie environment, like drugs, like grooming people into idols and having certain expectations of them, or the seedy side of the industry, like stripping and prostitution.”

An artist named Ginger designed the artwork’s head after honing his skills on The Emperor Has No Balls, a series of sculptures of Donald Trump that turned up last summer in various cities across the nation. A joint pop-up show with works by Plastic Jesus and former guitarist for Billy Idol, Billy Morrison, will have a VIP opening Feb. 24 with a one-day viewing for the public the following day at Gibson Brands Sunset (the old Tower Records building). The show will feature 36 works by the pair, including the Kanye piece as well as six new pieces by Plastic Jesus that comment on celebrity, materialism and fellow street artist, Banksy, whom he has often been compared to.

“I take it as a great compliment. However, it’s kind of quite lazy,” the artist says of the comparison. “I’m doing my messages in my own way. I like people to accept the message and the piece that I do for its own cultural value rather than because it’s similar to a Banksy.”

A native of the U.K., Plastic Jesus began doing street art about four years ago following a 20-year career as a photojournalist for magazines like GQ as well as The Mail on Sunday and other British newspapers, covering stories on human trafficking, drug smuggling and prostitution. In recent years, he’s turned exclusively to street art, making his stenciled phrase (found on both buildings and T-shirts), “Stop Making Stupid People Famous” his calling card. Next month he is planning a nationwide project dealing with Trump’s controversial immigration ban and recent ICE raids.

“If Trump is deposed tomorrow, all these Trump followers will think some great injustice will have been done and they will rise up,” says the artist, withholding judgment on the president’s most vocal celebrity proponent, Kanye West. “He will be welcome to the pop-up show. He can also buy a ‘Stop Making Stupid People Famous’ T-shirt. It would be great to see him wearing that as well.” 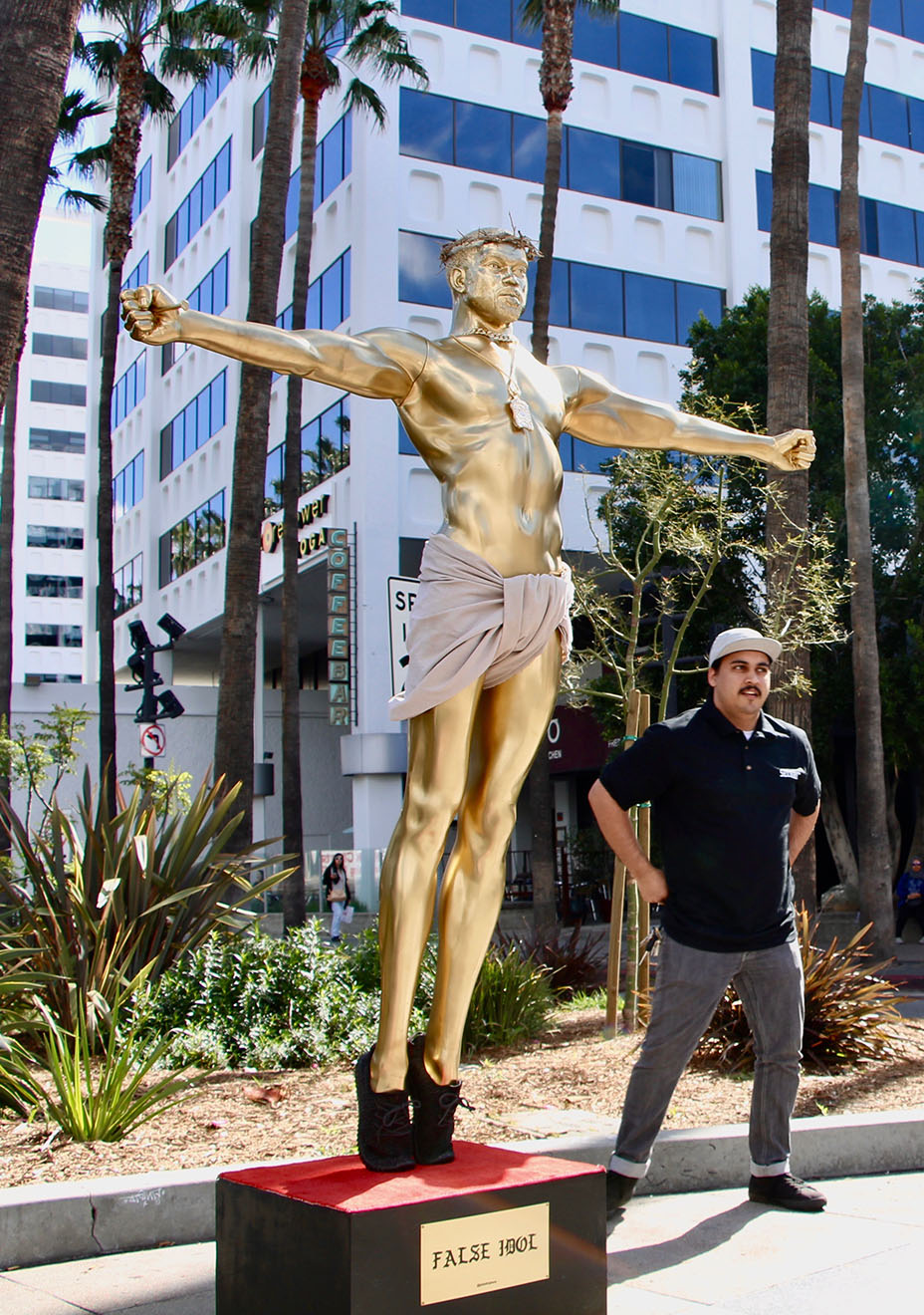