Dana Hollister has been attacked by the Archdiocese of Los Angeles, cross-examined by lawyers for Katy Perry, and been on the wrong end of several court rulings — including a jury’s decision on Nov. 17 that slapped her with a $5 million fine — all of which have conspired to deny her the thing she covets most: a stunning convent on 8 acres in the hills of Los Feliz. But now, the doyenne of Silver Lake real estate is appealing to a higher authority: the Vicar of Christ.

Hollister tells THR that she has been using back channels in Rome to appeal to the Vatican and Pope Francis with her $30 million offer for the Bernard Maybeck-designed convent (also known as the Earle C. Anthony house), which she plans to convert into a boutique hotel. That figure more than doubles the $14.5 million that Perry agreed to pay the L.A. Archdiocese in 2014 for the property, which has been at the center of a three-year legal dispute with no resolution in sight.

“I offered up to $24 million, and I am currently at $30 million for the property,” says Hollister, who owns L.A.’s vaunted Cliff’s Edge, Brite Spot and Paramour Estate (also a converted convent). “It could be one of the most beautiful properties in Los Angeles — the most beautiful hotel you have ever seen.”

When Superior Court Judge Stephanie Bowick ruled in March that the archdiocese — and not the elderly nuns from the Sisters of the Most Holy and Immaculate Heart of the Blessed Virgin Mary who had resided at the convent for four decades — could sell the property, it appeared to clear the way for Perry’s bid (the archdiocese wants to sell the property to Perry, while the nuns prefer Hollister — in part because she made her offer directly to them). 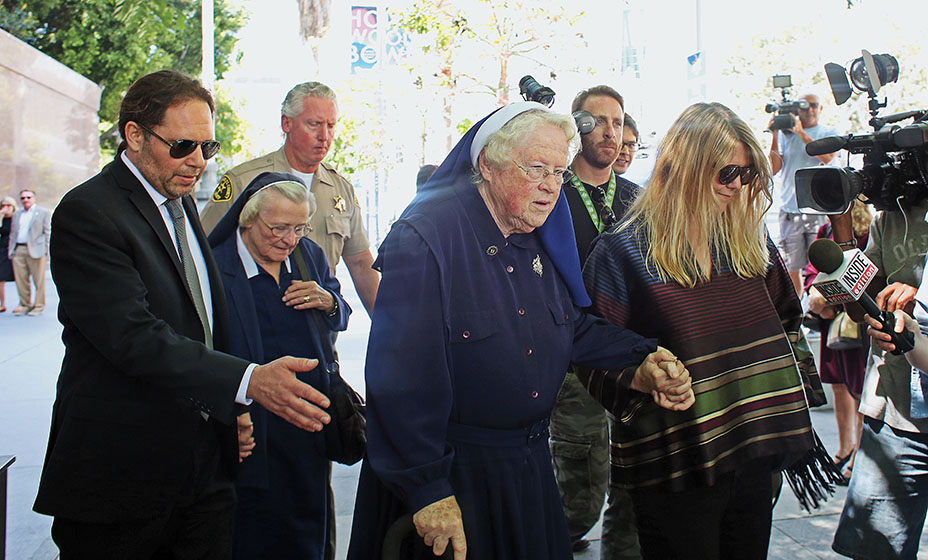 But since Bowick’s ruling, the story has taken several turns. Two of the nuns are appealing and, through an internal Vatican proceeding, challenging whether the archdiocese has authority over the property and the order itself. (L.A. Archdiocese spokesperson Adrian Alarcon confirms to THR that the proceeding known as the Apostolic Signatura is underway in Rome, and Italy-based attorney Luigi Coppola confirms that his firm is representing two of the sisters in the proceeding.) And Perry has had trouble meeting one requirement of her deal with the archdiocese: that she find a replacement for the convent’s House of Prayer, still in use by local clergy. The pop star was hoping that the 3-acre Chateau Emanuel in Eagle Rock — currently listed for $5.6 million by Partners Trust’s Laura Brandt — could serve as the new location, but a deal to acquire that property recently fell apart. (In September, the archdiocese amended its 2014 agreement with Perry, granting her an additional year to find a replacement property.) Hollister — who has maintained that her bid for the convent was executed before Perry’s — thinks she still has several cards left to play. Calls to Perry’s attorney seeking comment were not returned.

On Nov. 17, a jury ruled that Hollister must pay back more than $5 million in lawyer fees for deliberately trying to sabotage Perry’s deal for the convent. The jury awarded the archdiocese $3.47 million and Perry’s company, Bird Nest LLC, $1.57 million in fees. Hollister’s attorney Michael Geibelson says he plans to appeal the ruling.

Hollister stresses that she bears no ill will toward Perry and is acting in solidarity with the nuns, who she claims have been repeatedly exploited by the archdiocese. “This story is about their legacy of standing up against something very powerful,” she says. “It’s like David and Goliath.”

Appealing to Rome is a cagey, if risky, gambit by Hollister and would appear to be her last hope of winning back the convent. Alarcon tells THR that the archdiocese has always acted in the best interests of the nuns. As to whether the archdiocese would entertain a $30 million offer from Hollister, Alarcon says it would not because Hollister’s plans would convert the property from a residence to a hotel, which would be more disruptive to the surrounding neighborhood.

Hollister isn’t buying it. “It begs the question: Why aren’t you taking the highest offer? Is it because the sisters didn’t obey authority, is that it?”