“Sometimes I feel like we are living through a horrific dream,” the Scandal star said while accepting the Inspiration Award at GLSEN’s annual Respect Awards, held on Friday at the Beverly Wilshire Hotel. “It is a communal nightmare. The flames of terror and exclusion are being ignited by some of our most powerful ‘leaders.’ These people who have been entrusted with the protection of our rights, the rights of all of us, of we the people, have chosen instead to traffic in hate.”

Washington, who campaigned heavily for Hillary Clinton ahead of last year’s presidential election, did not mention Donald Trump or any members of his administration by name during her politically charged remarks.

“We’ve gone from a White House lit in all the colors of pride to a White House that literally preaches division and discrimination,” she said. “So sometimes I worry because the stakes are so high and fear is rampant, and with so many of us, so many disparate communities feeling more vulnerable than ever before, I’ve been thinking a lot about our young people.”

Despite her worries, Washington does remain hopeful because of organizations like GLSEN, the country’s leading advocacy group for LGBTQ students from kindergarten through 12th grade.

“The GLSEN research is clear,” said Washington, who was presented with her award by her Scandal co-star Tony Goldwyn and by one of the evening’s six student co-hosts, Em Gentry. “By creating school environments that embrace queer inclusivity, understanding and acceptance, you not only empower LGBTQ students, you help all students. When you ensure the protection of one, you make space for all.”

“Through your boldness and your bravery,” she continued, “you’re making it so that every young person in America has the chance to love and be loved, whether [they’re] straight, gay, bi, trans, gender nonconforming, white, Asian, African-American, Latino, First Nation, documented, undocumented, Christian, Muslim [or] Jewish.”

“To every student here, I admire you,” said the Spider-Man: Homecoming star. “This award is really for us because we are the game-changers. We are the ones who are literally changing the game. … We are the future.”

For honoree Bruce Bozzi, the evening was a family affair. The restaurateur was presented with the Champion Award by his 9-year-old daughter, Ava, and his stepdaughter, Billie Lourd. Bozzi, who is married to CAA’s Bryan Lourd, recalled being bullied as a child. “When you are gay, you never forget the first time a group of kids call you ‘faggot,’ ” he said. “But as Billie said to me the other day, ‘There should never be a first time.’ ”

Bozzi garnered some of the night’s biggest laughs when he also recounted his sister listening to Peter Frampton, The Rolling Stones and The Who while growing up, while he preferred Barbra Streisand, Olivia Newton-John and, “on a hard day, a little Anne Murray.”

Arrow and The Flash producer Greg Berlanti was on hand to help present the Visionary Award to DC Entertainment with student co-host Nate Fulmer. DC Entertainment president Diane Nelson accepted the award on behalf of the Warner Bros. division. “When it stops being controversial or even newsworthy to feature an LGBTQ character in great entertainment, we will have made strides towards understanding,” she said. “When Greg Berlanti chooses to ensure that his shows feature characters of diversity of all kinds, he’s working to normalize what should already be normal, accepted and understood. It’s for this reason, the power of DC’s characters to effect change for the good, that I so happily accept this award.”

Not all the honorees were Hollywood-centric: Ose Arheghan was named student advocate of the year.

“In schools, the workplace and everyday life, queer individuals in my town and this country are vulnerable to prejudice and discrimination and violence,” said the 17-year-old Shaker Heights, Ohio, high school senior. “In 2017, as a young person, I’m lucky enough to see people like Frank Ocean, EJ Johnson and Amandla Stenberg living their truths as queer people of color. That inspires me to do the same.” 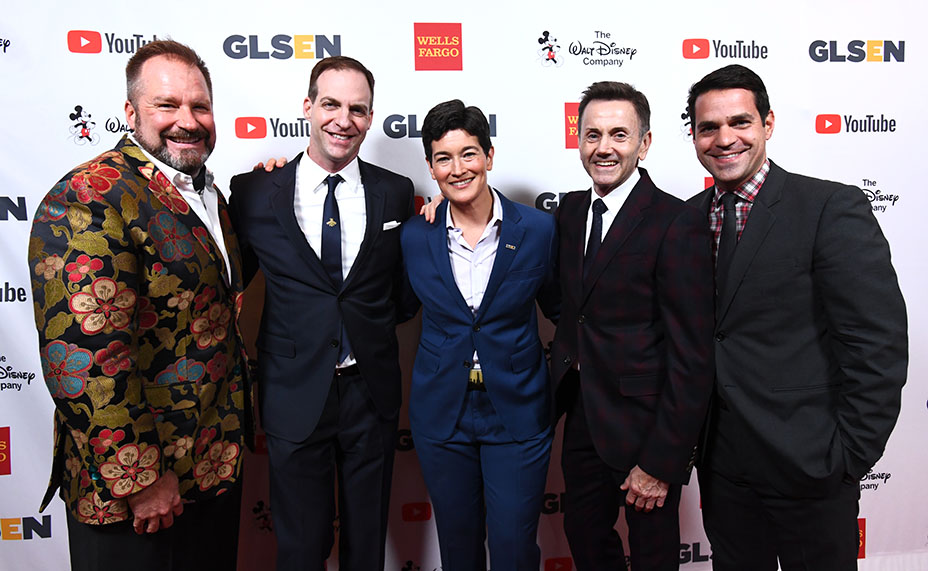