Starting in 2020, the NFL’s Los Angeles Chargers — now relocated to the city where they were born after 56 seasons in San Diego — will share the stadium being built in Inglewood by L.A. Rams owner Stan Kroenke. Until then, the new arrivals will play 20 miles south in Carson, at StubHub Center, which at 30,000 seats is the smallest NFL venue in decades and smaller than 108 of 130 Division 1 college football stadiums — one of a few disadvantages the team faces relative to the Rams, who saw their own splashy (if not victorious) return to L.A. a year ago.

But A.G. Spanos, who with brother John co-runs the team their family has owned since 1984, says “the very intimate” venue will a draw for fans who will be able to “to hear things they probably normally wouldn’t hear, and see things closer.”

Indeed, such stars as Owen Wilson and Mike Fleiss will make the trek to cheer on the Chargers at their preseason opener against the Seahawks on Aug. 13. And while CAA’s Avi Wasserman, a San Diego native, says his team’s move was like “a girlfriend you loved dumping you,” he feels “like we can be friends” again and plans on being a regular at StubHub, along with WME’s Ryan Feldman, a childhood friend.

Since their move was confirmed in January, the Chargers have been making creative inroads with Angelenos. Thirteen team employees ran the L.A. Marathon for charity. A Chargers hot dog was touted at Pink’s, and on Saturdays this fall cheerleaders will hand out water bottles at Runyon Canyon. Plus, the organization has a promotion in mind that should make an impression on Hollywood — literally.

On Aug. 15, the Chargers will take over the Sunset Strip tattoo parlor Shamrock Social Club, where artist Mark Mahoney boasts such clients as David Beckham and Angelina Jolie. For one day, fans can score free ink: a lightning bolt like the one newly elected Hall of Fame running back and former Charger LaDainian Tomlinson has on his calf. “We’re not afraid to think differently” to win fans, says A.G. Spanos.

Meanwhile, SoCal sports leaders have welcomed their new competitors: Lakers owner Jeanie Buss hosted a dinner for the Spanos brothers at Craig’s, they met Clippers owner Steve Ballmer at a game, and Kobe Bryant stopped by training camp July 29 in Costa Mesa. “We don’t want to come into this market and tell everyone what they want to see,” says John. “We want to hear from them what they want.” As long as that doesn’t include him going under the needle at the team’s tattoo party. “I faint when I have my blood taken,” he says with a laugh. “So probably not me.” 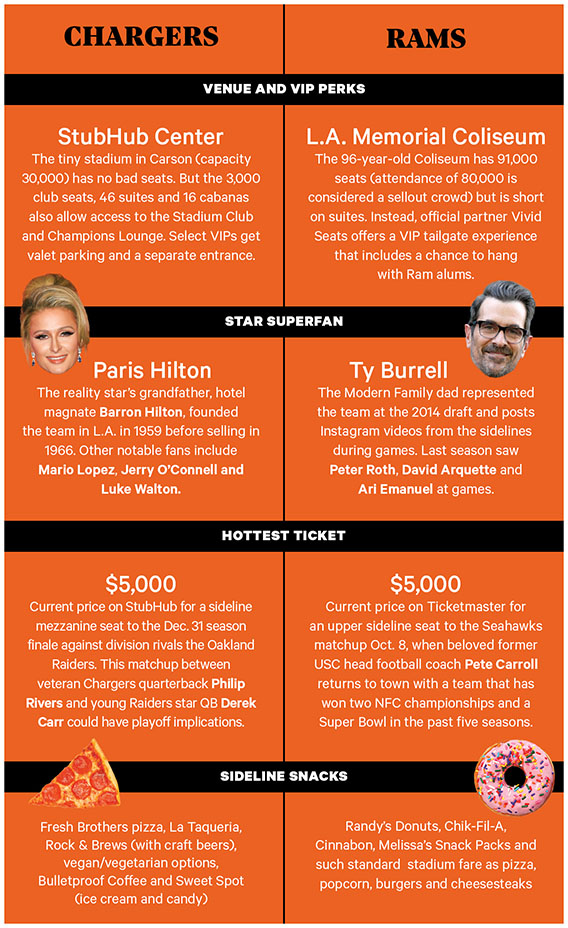