Serious questions about mislabeled sushi were widely reported in January after a study published in the journal Conservation Biology concluded that nearly half of the fish served at prominent Los Angeles sushi restaurants did not match the species on the menu. That study got people talking, but the one thing it didn’t do was name names.

Cookshop, the New York Brunch Institution With a Hollywood Following

Now, relying on the same protocol methods and an independent lab, The Hollywood Reporter has replicated that testing, using samples purchased from eight prominent sushi restaurants in L.A.: Asanebo, Hamasaku, Hide Sushi, Jinpachi, Katsuya, Kiriko, Sugarfish and Sushi Sushi. The results, plainly stated, are shocking: Roughly 60 percent of the fish tested did not match what was purported on the menu, and not a single restaurant achieved a perfect score.

After consulting with biologists, THR collected sushi or sashimi samples of five common fish — salmon, yellowtail, tuna, snapper and halibut — and extracted a pea-sized cube of each sample. These specimens then were placed in a labeled jar of ethanol and delivered to a laboratory that used the same procedures and DNA sequencing used in the original study. Eight highly rated restaurants on L.A.’s Westside were chosen — all of which offered a la carte ordering and lunch service. (Omakase-only restaurants, where diners can’t choose specific species, were excluded.)

The DNA analysis revealed that three fish species — halibut, yellowtail and red snapper — were nearly universally mislabeled, while tuna always was identified correctly. Eighty percent of the samples from Hamasaku, in Westwood, matched the species on the menu, but every other restaurant had provenance issues with at least half of the fish tested. 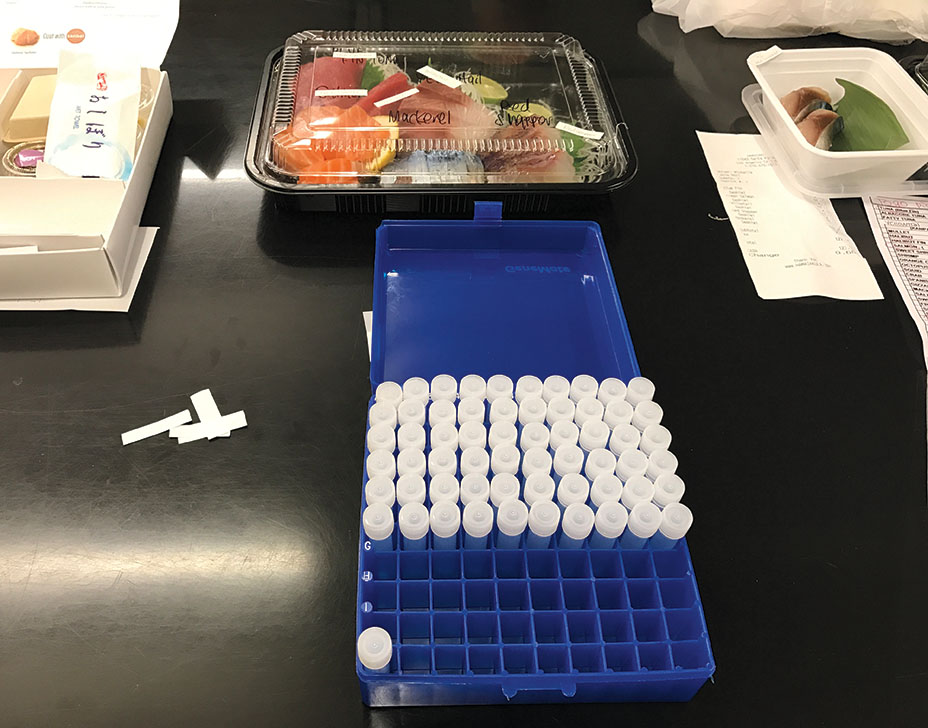 The explanation for such broad mislabeling is complex — errors could be the result of a restaurant mistake, a sourcing issue that originated at a wholesale market or fishing boat, fish fraud or cultural disagreements about acceptable replacements. Though there are potential health concerns about mislabeled sushi — escolar, a species often used in place of white tuna, can cause digestive problems — an experienced biologist who reviewed THR‘s findings does not believe any of the substitutions revealed posed any risk to diners. But several of the mislabeled samples did meet the criteria for fish fraud — when a less costly species is substituted for an item listed on the menu without telling consumers: red snapper at Asanebo that actually was Pacific mackerel, halibut at Katsuya that turned out to be olive flounder, and halibut at Kiriko that DNA testing found to be summer flounder.

A footnoted explanation added to the Sugarfish menu since the issue of mislabeled fish entered the public eye captures the strange depth of the problem at many sushi restaurants, one that is at once biological and cultural. “Our snapper is NZ Snapper from New Zealand,” the menu now reads. “Our Hirame is Fluke from the U.S. North Atlantic coast, which in L.A. is commonly called Halibut.” When shown this text, Demian Willette, the Loyola Marymount researcher who led the Conservation Biology study, actually laughs out loud. The fish known as New Zealand snapper is Pagrus auratus, which bears no biological relationship to snapper; while fluke and halibut are two vastly different species. “I know that FDA specifications and Japanese traditions don’t always line up, but come on: Fluke is not halibut,” says Willette. “That’s like saying you’re selling real crab and then using artificial crab. It’s being misleading in an unacceptable way.”