There has always been a reassuring earnestness about Sting — a rock star fueled by art and activism, content to consume himself with projects not necessarily driven by fame and fortune. His latest is The Last Ship, a reboot of his commercially disappointing 2014 Broadway show, a semi-autobiographical look at a dying shipyard town in the north of England.

There were all sorts of reasons the original production didn’t fly on Broadway, but Sting’s glorious music was not one of them. The Tony-nominated score for this show is some of the best work of his four-decade career — songs that perfectly advance the narrative while never once losing the mood-setting magic that has always been his trademark.

That alone makes the show worth a trip to the Ahmanson Theatre in Los Angeles, where the new Last Ship made its American premiere Wednesday night. The U.S tour launch drew a star-studded crowd that included Dustin Hoffman, Annie Lennox, Pierce Brosnan and cheers from Sting’s Police bandmates Stewart Copeland and Andy Summers.

Of course Sting is now starring full-time, eight shows a week on tour in this production — something he did only briefly in New York after producers called him in an 11th-hour bid to juice flagging sales. His sustained presence might have been enough to keep the show afloat a bit longer back then, but previous commitments drew him away; the production closed after just three months — and in retrospect that now seems for the better.

The redux incarnation of The Last Ship has a rewritten book by Lorne Campbell (who is also the new director, replacing Broadway’s Joe Mantello), which resets the tone, jettisons a main theme and character and reimagines others. While it could still use some editing, the result is a more compelling story of anger and angst — the panic, and in this case determination, that besets a community as livelihoods disappear.

At its heart, The Last Ship has always been a show about labor and workers uniting, a tonally distinct descendant of musicals like Kinky Boots or The Pajama Game. But Billy Porter, Bob Fosse and “Steam Heat” would not be at home here. While flashy in its own way, the show treads a careful line between dramatic-play-with-music and all-out Broadway musical.

Last year, when this new version had a six-week run in Toronto, (the redo previously played overseas in 2017-18), Sting called it a “play with songs, not a fairy tale,” taking a jab at Broadway tropes. That sentiment is particularly apparent when the underlying love story suggests a soft-focus Disney moment may be ahead — but some quick-witted choreography jolts the audience back to reality. 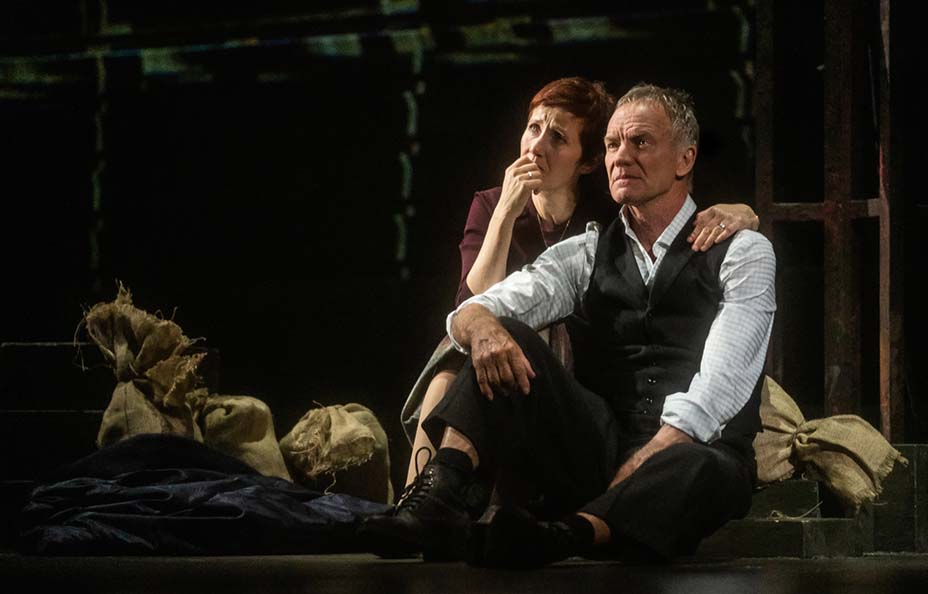 Submerging himself effortlessly into an exquisite ensemble led by West End vets, among them Frances McNamee, Jackie Morrison and Oliver Savile, Sting plays Jackie White, the foreman of a shipyard on The River Tyne where the townspeople have poured their blood into building The Utopia, a majestic vessel with no buyer — a turn of events due to changing times and corporate chicanery, both threatening to put the whole region out of business.

Additional sadness comes in the form of Jackie’s secret cough, revealed by his wife Peggy (Morrison). But that doesn’t deter us from enjoying the show’s dashing leading man, Gideon Fletcher (Savile), who has returned from the sea in search of former love Meg Dawson (McNamee). All are terrific, and terrific vocalists, too, along with Sophie Reid as Meg’s headstrong daughter Ellen looking for a way out of town and Marc Akinfolarin and Joe Caffrey as dockside lifers.

There are several stunning love songs — and protest songs — in this epic, among them McNamee’s star turn in “If You Ever See Me Talking to a Sailor” and a duet with Savile, “What Say You, Meg?” His “And Yet” and “Dead Man’s Boots” also transfix. Sting leads the ensemble on the anthemic title number, complete with a telling conductor’s wrist-flick.

The workmanlike set from 59 Productions is a versatile beast of catwalks and projection screens doing convincing duty as dock, church, living room, pub and more. It snows, the waves crash against the seawall, silver clouds sail by. The visuals are very well done — but no, the sun never shines. The palette is bleak, the costumes plain, the tone is clear.

That, coupled with the actors speaking the northern English dialect known as Geordie — which to this minimally trained ear sounds a bit like Glasgow-meets-Dublin in a bar — may have been off-putting to Broadway audiences expecting something splashy or more familiar, particularly when a rock star’s name was attached.

Maybe the timing for this material is now better, with original musicals suddenly seeming an endangered species. Is anyone really yearning for a Broadway remake of The Karate Kid? The official announcement on that project’s development came yesterday just as Sting was trying once again to convince audiences to leave their comfort zones. He’s made it clear: There will never be a jukebox musical based on his greatest hits.

It is also probably not a coincidence that Sting — a 17-time Grammy winner — premiered this show in L.A. smack in the middle of Grammy Week, a reminder it seems that great composers can thrive over decades with original work in multiple mediums.

Who knows what the future holds for this retooled musical and its unorthodox six-year path from Broadway bust to rewritten recreation. But if there’s ever a Tony Award for Most Passionate Commitment, Sting earns that prize.