In his upcoming book How Y’all Doing: Misadventures and Mischief From a Life Well-Lived (William Morrow), out Tuesday, the Emmy-winning actor and Instagram sensation pens an essay collection in which he shares comical and heartfelt anecdotes from his life and career such as meeting and working with Jessica Lange, Lady Gaga and more on the set of American Horror Story to forging a friendship with Lily Tomlin after working on the series 12 Miles of Bad Road. Last year, when the world was grappling with the onset of the pandemic, Jordan became a source of laughter and light as he amassed over five and a half million followers for his humorous Instagram posts, making him an immediate viral sensation. Throughout the 195-page book, Jordan takes readers on a trip down memory lane all while delivering his signature humor.

Gary Friedkin, Actor in 'Young Doctors in Love,' Dies at 70

In a heartfelt story, Jordan recalls venting to the late Carrie Fisher about his mother’s reservations about his Hollywood career, in particular after seeing viral photos of him dressed in drag. Soon, Jordan writes, he received an unexpected phone call from Fisher’s mom, Hollywood legend Debbie Reynolds, who not only offered words of encouragement but demanded she speak to his mom. The exchange was not only a surprise but proved to be a rather monumental moment in Jordan’s career and relationship with his mom.

Below, The Hollywood Reporter shares an exclusive excerpt.

Many years ago, I was honored to be involved in an AIDS event that raised millions for the cause. The event coordinators had the spectacular idea to pay respect to Bob Mackie, the renowned designer, by having dozens of supermodels parade down a runway wearing all his iconic designs.

When I first arrived in Hollywood in 1982, I had a fantasy where I wanted to be like a gay Hugh Hefner. I envisioned myself living in a huge mansion in the Hollywood Hills. And on Sundays, around my poolside lanai, I would have “brunches,” which was a new word to me and something I had never attended but sounded really enticing.

And in attendance at my brunches would be people like Bob Mackie. Mr. Mackie represented for me an upper echelon of successful, wealthy gay men that I clamored to be a part of. It was a glittery cut-glass ceiling I never quite broke through.

When we were introduced backstage, he was extremely sweet, but I think he had a million other things on his mind. He certainly did not fawn over me or act like we were going to be the best of friends.

But nevertheless, I was in gay-boy heaven.

Bob Mackie designed for every gay icon known to man.

And they were all there.

Well, maybe they were not all PHYSICALLY there. Maybe not even ONE of them was there. But they were all there in spirit as their gowns and costumes, carefully preserved, hung on dozens of racks, with all their jewels!

A feast of brightly colored outfits silently screaming to be worn down the runway by supermodels.

As the hurly-burly was about to reach a fever pitch, I was pulled aside backstage. “Mr. Jordan, you have been so giving with your time and we are so appreciative, but we want to ask one more favor, and you can certainly say no. Mr. Mackie is expecting the dress with the headdress that Cher wore to the Academy Awards. But we thought it would be cute and funny to send you out first in another Cher costume. Bob will LOVE it!”

I was pulling off my clothes before they finished the last sentence.

We quickly settled on a bizarre French maid costume from the old Sonny and Cher show. My God, Cher must have been tiny back then. We struggled to shoehorn my fat little bottom into fishnet stockings and the exquisitely tiny maid costume complete with a perky little maid’s cap.

For some unknown reason they threw black army boots on my feet to complete the ensemble. Honey, I was a mess. I looked torn up from the floor up.

But I hit the runway sashaying like Little Egypt, who “came out strutting wearing nothing but a button and a bow.” I worked that runway like a seasoned veteran.

I swear, I outdid even RuPaul.

The crowd went BALLISTIC! It was a night I will always remember, but now I remember it for a slightly different reason.

I have identical twin sisters who are twenty-two months younger than me. They have run interference between me and my somewhat conservative Southern Baptist mother practically since birth.

Soon after this event, one of them called in a tizzy. “Oh boy, Leslie. You have done it now. You are in this week’s National Enquirer magazine. You know that is Mother’s secret, don’t you? Every Friday evening, she climbs in bed with a carton of butter pecan ice cream and reads that silly magazine cover to cover.”

I was quite taken aback. “What on earth am I in the National Enquirer for?”

“It is just terrible. A huge picture, that takes up half the page, of you in drag!”

“And you do not even look pretty. You look awful.”

Without even hanging up the phone, I ran to the nearest grocery store and grabbed the latest issue of the tabloid that can strike terror in the heart of anyone in the public eye.

There I was, big as life. Strutting along in my French maid costume.

And my sister was right. I looked awful. God-awful. The picture was taken at such an angle it was not clear I was ambling down a runway. I could have been strolling the streets of West Hollywood on my way to buy a carton of milk!

You must bear in mind this was years and years before Drag Race and other shows brought drag into the mainstream.

My churchgoing mama, back in those days, definitely did not understand!

When I finally spoke to her, she was livid. “You live out there in West Hollywood where people can waltz around dressed like that, but I live here in Chattanooga, Tennessee, where such behavior is not accepted or tolerated. And for that picture to appear in the National Enquirer? It’s just too much, Leslie.”

That night, I attended a meeting at one of my myriad rooms of recovery. To my surprise and delight, I was seated next to Carrie Fisher. I had seen Carrie around the rooms for years and we had been introduced many times. I certainly did not count her as a close friend. But I think she picked up on the vibe that all was not well.

“You okay, kid?” She had always called me “kid.” I was older than her, but it was a fun thing I reveled in.

My woes with my mother came pouring out. I told her the whole story and I felt a lot better for having shared.

And Carrie, bless her heart, listened attentively, which might have been a challenge as I tend to run on and on, forever and ever.

When the meeting was over, Carrie approached me holding out her cell phone. “Somebody wants to talk to you.”

I put the phone to my ear and in that immediately recognizable, sweet voice, I heard, “Leslie, this is Debbie, Carrie’s mother.”

Debbie Reynolds was on the line!

I heard cartoon birds chirping and I expected her to break into song. “Tammy, Tammy, Tammy’s in love!”

But she went right to the point.

“Carrie told me that your mother is upset with you because of some of the choices you made out here in Hollywood. Carrie told me she is upset from some picture in that awful tabloid magazine. I have been through the exact same thing. When that woman stole my husband . . .”

Okay. Okay. Deep breaths. Deep breaths. Am I really listening to Debbie Reynolds talk about Elizabeth Taylor’s stealing Eddie Fisher away from her? Debbie Reynolds barreled on, “. . . and it was all over the press, my mother called from Texas and said, ‘Debbie, I certainly hope that you are not considering divorce. You live out there in Hollywood where everyone and their brother gets divorced, but I live here in Texas and it is not accepted or condoned.'”

“Oh, Miss Reynolds! That is exactly what my mother said about me appearing in that magazine dressed in drag.”

“Give me your mother’s telephone number. I want to call her.”

I was aghast. My mother is extremely private. I did not want her thinking I was airing our family’s dirty laundry in public. But who in my mother’s generation would turn down a phone call from the Unsinkable Molly Brown?

All night and into the next day, I sat waiting to hear from my mother. Every time the phone rang, I jumped.

When I had not heard from my mother by midday, I finally took it upon myself to call her. She immediately jumped right in. “Leslie, what is going on?”

“Did Debbie Reynolds call you?”

“She’s on my answering machine. But I thought it was a joke.”

“It’s no joke, Mother. I really want you to call her.”

“She wants to tell you something.”

“But when? When would be a good time for me to call?”

I had not thought of that one. “Let me call her daughter and find out a good time for you to call.”

When I called Carrie, she laughed, “Before five o’clock. Five o’clock is ‘kickoff time.”

I told my mother the time and settled in for a long wait. Hours passed and I still hadn’t heard anything.

Ring! I dove for the phone.

Mother immediately launched in without even saying hello. “Leslie, she’s lovely. She is everything and more we have all believed about America’s Sweetheart.”

Debbie Reynolds told my mother she must not let anything I did in Hollywood be a reflection upon the way in which she raised me.

“Peggy, you must trust that he will do the best he can to not embarrass you, and even if it does happen, you cannot hold him solely responsible. My daughter, Carrie, has told me that Leslie is a good egg, and my daughter, Carrie, is a good judge of character. Even though she sometimes loses sight of her own good character.”

It was not until the conversation with Debbie Reynolds that my career choices began to make sense to her. I have never reached the pinnacle of an acting career, where you are allowed to make big decisions about what roles you’ll choose. I’ve always taken what’s offered and hoped for the best. Not all the roles I have played have been in the kind of shows my mother could brag and tell her friends about.

But somehow, her conversation with Debbie Reynolds opened a door.

So here’s a big thank-you to Debbie Reynolds and Carrie Fisher for making this all possible. 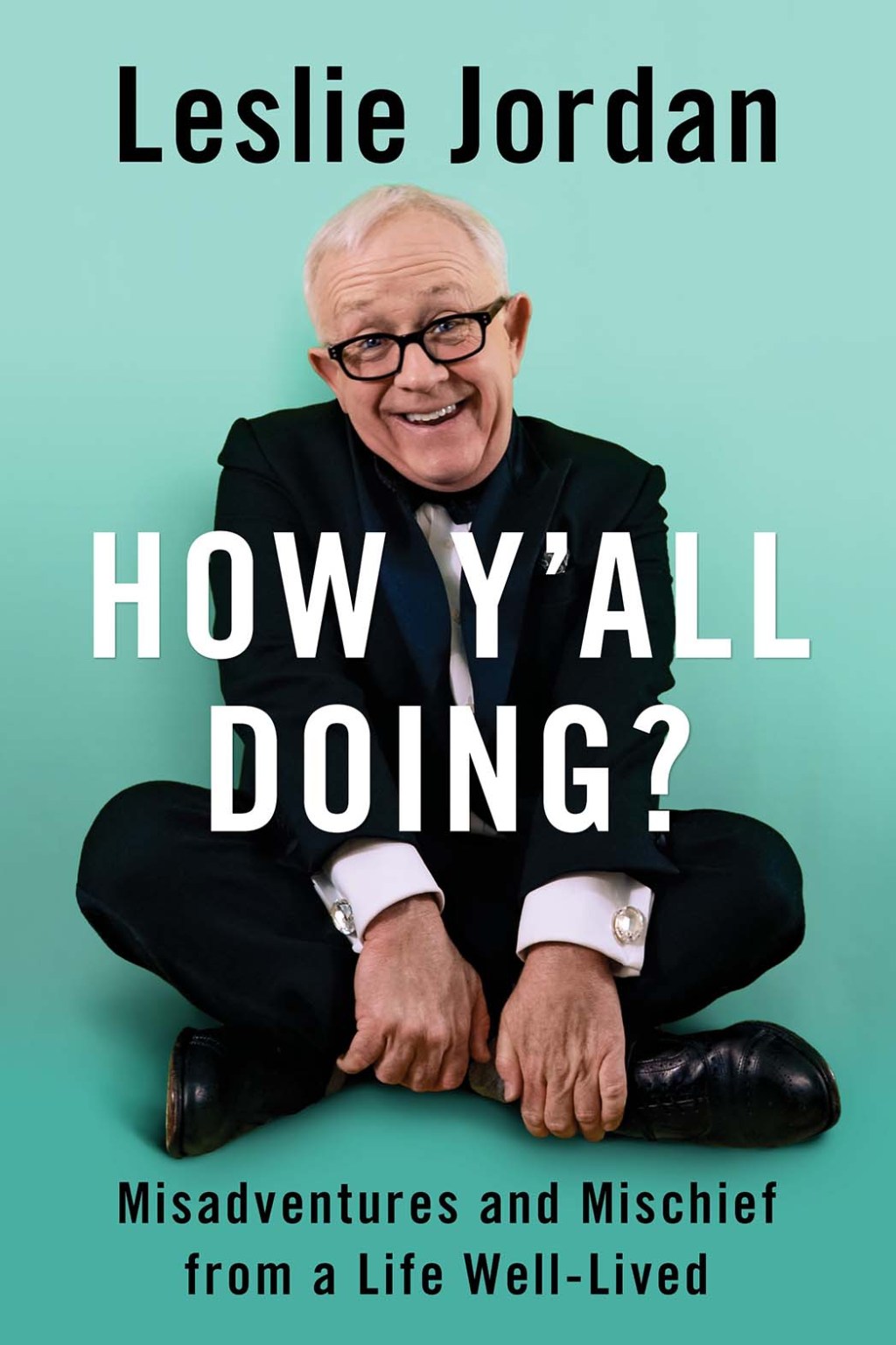