If a musical can imagine Alexander Hamilton in a rap battle, why not Nat King Cole in a tap battle?

That absurdist moment is one of the mesmerizing highlights in Lights Out: Nat “King” Cole, an ambitious new work about the sublime crooner and jazz great, making its West Coast premiere at the Geffen Playhouse in Los Angeles. The show skewers Hollywood while imagining what Cole was thinking, feeling and dreaming as he preps for what was to be the very last broadcast of his 1956-57 NBC variety program, The Nat King Cole Show.

More than 70 years ago, Cole’s smooth hits put Capitol Records on the map, propelling him to trailblazing superstardom. But while he became the first African-American to host a nationally televised show, the series never found a national sponsor in a segregated nation, and was off the air in just a year.

Offstage, Cole and his young family endured far worse: Racists desecrated his Los Angeles home and poisoned his dog. And during a concert in his native Alabama, the Klu Klux Klan rushed the stage, physically attacking him. Through it all Cole (who died in 1965 at just 45), remained the elegant, eloquent hitmaker audiences adored — “a gentleman in a rough world.”

Co-written by Patricia McGregor (who also directs) and Colman Domingo (the stage and film actor who co-wrote 2017’s Summer: The Donna Summer Musical), Lights Out is not an evening of feel-good Billboard hits slapped between narrative scraps. Best characterized as a play with music (say its producers), it’s a fantasy about the rage beneath Cole’s unflappable exterior. While NBC layered on the indignities, forcing Cole to lighten his skin with powder and keep an “appropriate physical distance” from white stars such as Betty Hutton, the crooner never buckled.

Though set in 1957, the script is full of modern-day jargon and phrases (“micro-aggression,” “urban brother,” “this shizz”) — and nods to events that hadn’t even happened yet, such as Frank Sinatra’s 1969 version of “My Way.” Initially it’s distracting. After the second reference to “door number three” I found myself thinking, do these writers know that Let’s Make a Deal wasn’t on the air until 1963?

But as the evening grows increasingly fanciful (and nightmarish), the intent seems clear. Lights Out is a midcentury timepiece that explores racism in the U.S., then and now. Sometimes with deft nuance and sometimes with a sledgehammer. 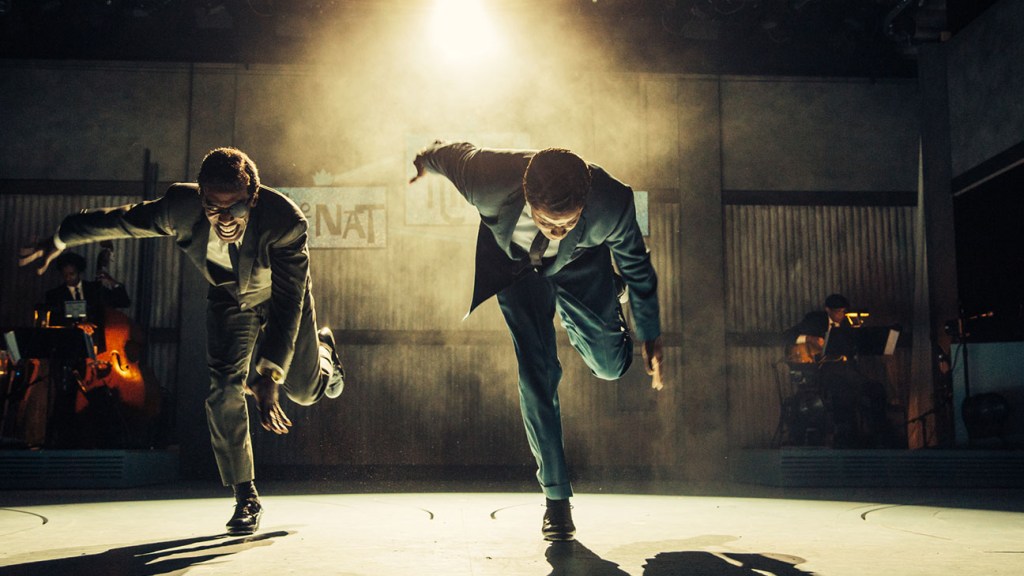 With 19 songs (among them “Blueberry Hill,” “Nature Boy,” “The Party’s Over,” “Mona Lisa”), plus a small but terrific singing and dancing cast and a superb four-piece jazz combo meant to simulate Nelson Riddle’s orchestra, it’s much more than a play.

In the title role, Dule Hill (The West Wing, Psych, Suits) is a study in finesse, capturing Cole’s outer cool and inner blues, without resorting to mimicry. Who can sing like Nat King Cole anyway? No one. Where Hill truly excites is during the show’s climactic tap number — a showcase with Daniel J. Watts, who plays a comically hep Sammy Davis Jr.

Throughout the evening the good friends spar, Sammy urging his pal to stay silent no more. Hill, who made his Broadway debut more than 30 years ago as a replacement in The Tap Dance Kid, still possesses remarkably sharp skills. And alongside former Hamilton Broadway ensemble member Watts, the two create an inferno.

Elsewhere there’s a moment that induces chills when the writers imagine what Cole’s 1991, made-possible-through-technology “Unforgettable” duet with daughter Natalie Cole (Gisela Adisa) would have been like had the two performed it in real life.

Adisa doubles as a bawdier-than-usual Eartha Kitt, yanked off the stage by NBC censors with a cartoonish red hook. She’s one of four castmembers who, like Hill and Watts, made the jump from the original 2017 production of this show at The People’s Light outside Philadelphia.

But it’s another Philly holdover — Zonya Love (recently on Broadway in The Color Purple) — who claims the night early on as Cole’s mother, putting over what is probably one of the most engaging versions of “Orange Colored Sky” of all time. Her mere re-entrance later in the evening earned cheers.

Not all of Lights Out works as well. The script goes oddly awry about 70 minutes in (though it recovers by the end), and Cole’s talent as a jazz musician is underplayed. But with Broadway so intent in recent years on mounting shows with the built-in familiarity of music we already love — in the guise of deconstructing the lives of icons — it’s refreshing to see a “musical” in which narrative is king.