“To the future,” toasts one of the characters in Jordan Harrison’s Log Cabin. “May it get here soon.” That wish is adjacent to an idea expressed in the same playwright’s Marjorie Prime: “The future will be here soon enough, you might as well be friendly with it.” The difference in that soulful 2014 play and its even better 2017 screen adaptation, both set in a near tomorrow, is the nuanced contemplation they brought to the awkward process of adapting to change while simultaneously holding on to and letting go of the past. The undercooked Log Cabin, by contrast, is schematic, lifeless and artificial in its examination of self-absorbed characters whose complacency is challenged by shifting attitudes.

I say characters, but really the six people represented onstage in Pam MacKinnon’s extravagantly upholstered production of this flimsy exercise are merely mouthpieces for a range of talking points. The most irritating of them in a fiercely competitive contest is Jesse Tyler Ferguson’s insufferable writer Ezra, narrowly inching out his flinty lesbian friend Jules, played by Dolly Wells of HBO’s Dolly & Em.

The play spans 2012 through 2017 and its title is somewhat misleading in that Ezra, his black husband Chris (Phillip James Branson), British Jules and her Asian-American wife Pam (Cindy Cheung) are decidedly not gay Republicans. In fact, their aghast reaction to Trump’s victory on Election Night 2016 is one of many strenuous attempts by Harrison to underline the play’s reflection of the conflicted realities of LGBTQ liberals in present-day America. But this cozy multi-culti quartet — whose friendship seems more of a plot necessity than anything grounded in shared history — find themselves branded as the new Mainstream Privilege when someone more marginalized and still fighting for rights comes along.

That would be Ezra’s old friend Henry (Ian Harvie), a trans man who back in their less sexually evolved high school days was Ezra’s prom date, Helen. Henry rolls along for a group dinner at Jules and Pam’s stylish Brooklyn apartment, accompanied by his perkily confident millennial girlfriend Myna (Talene Monahon), who has dated cis guys, plus a few girls, and now claims to have found her romantic niche with trans men.

No sooner have Ezra and Chris straightened out the correct pronoun etiquette than they start bristling at being lumped — via the “cis” category of biologically born males — together with all the entitled jerks handed the keys to the kingdom at birth. Growing up in Wichita, Chris, in particular, endured years of bullying and abuse for being not just gay but also black. Both he and Ezra are quick to point out that while they may now enjoy the benefits of policy reforms and public acceptance, it hasn’t always been that way. But to the stigmatized folks still fighting on the fringes for basic rights, their battle-scarred history is erased by their present security. Yesterday’s minority has become today’s self-satisfied majority.

That’s the play’s core conflict, and it’s certainly an interesting one, ripe for dramatization, as trans Americans look to their brethren in the queer community for support they feel is not always forthcoming. “We’re all trying, right?” says Jules, with a hint of transphobic superiority. “We’re all fully invested in navigating this brave new world with them, but it sometimes seems like they want us to get it wrong.” The gay male and lesbian couples at the center of Log Cabin seem to feel they have earned the right to relax into the bougie comforts afforded them by decades of struggle, while Henry, and by extension the entire trans community, is bracing for a struggle that’s far from over.

The trouble is that Harrison hasn’t successfully dramatized any of this. Instead he has parceled it out in preachy mouthfuls, with character arcs and plot developments organized as if by diagram. It’s like a queer-identity seminar with one-liners. Only the terrific Brannon makes Chris’ defensive outburst come from a place of real experience and hurt, and Cheung’s Pam, after sticking to her characteristic wise monosyllables throughout, makes some sharp points about the compromises entailed in any marriage, gay or straight.

Too frequently, we hear the playwright’s voice, not those of the characters, merely checking off boxes and stating positions that remain scattershot, diffuse. The anxiety of gay and lesbian couples about replicating the structure and rules of monogamous heterosexual marriage already is starting to feel exhausted in terms of its dramatic potential, as is the big question of whether or not to have children, which here yields excruciatingly cutesy-eccentric scenes with adults playing babies.

“What would Keith Haring think?” wonders Ezra, acknowledging the cultural chasm with a sigh. “All those radical ’80s art queers, if they could see us lining up for gender-coded balloons at Party fucking City. Or registering at West Elm.”

Ezra puts aside his misgivings about becoming a father in order to please Chris, and the two of them co-opt Henry’s uterus to make it happen. “Pregnant lady with a beard,” jokes Ezra. “Pregnant guy with a beard,” Henry corrects him. The situation may be novel, but in this case it’s not remotely believable.

Mediocre plays like Peter Parnell’s Dada Woof Papa Hot or Mark Gerrard’s Steve thrashed out similar gay domesticity issues three years back with few startling insights. Harrison stirs in thoughts on millennial shallowness; the differences and overlaps between race and sexuality as outsider incubators; the speed with which the oppressed can get so settled they experience a failure of empathy; the lingering inability of older generations like Ezra’s father to think of gay marriage or parenthood as the real deal.

Living in a world in which the concept of “normal” keeps shifting is a potentially lively subject, and had Henry been a layered character rather than just a representation of the next threshold in queer rights (the production at least scores points by casting a trans actor), there might have been something here. But the occasional nugget of witty dialogue aside, Log Cabin is contrived and unconvincing. 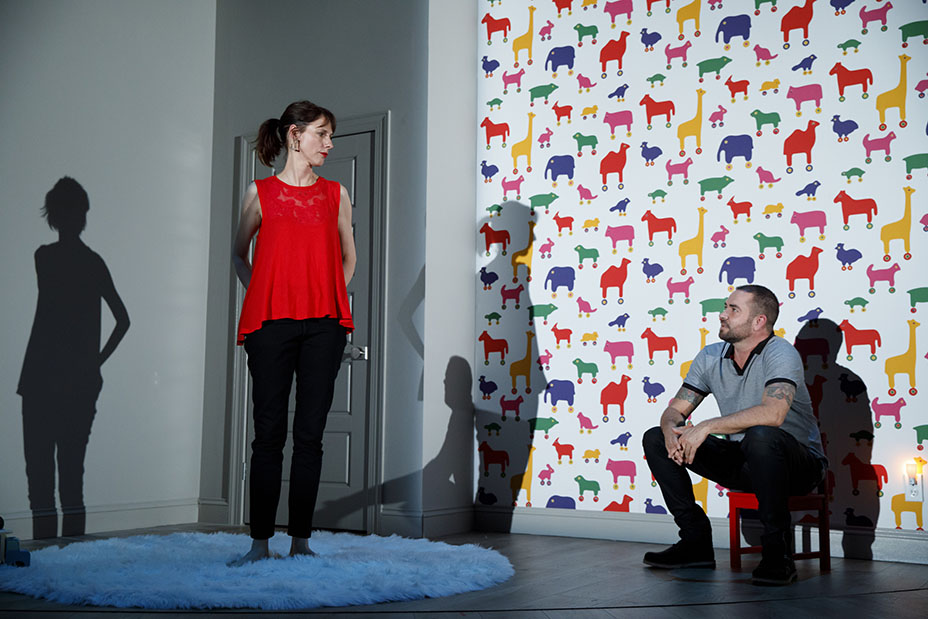