The venerable Wilshire Country Club, where Howard Hughes, Harold Lloyd, Leslie Nielsen and Tommy Smothers were members — but Mickey Rooney was not — is opening its Rossmore Avenue gates to professional golf next week when it hosts an LPGA tournament.

The inaugural HUGEL-JTBC L.A. Open, with a purse of $1.5 million and featuring one of the deepest fields in women’s golf in some time, will be held Thursday through April 22 at the Hancock Park layout.

While the PGA Tour comes to Riviera Country Club in Pacific Palisades each February, this will mark the LPGA’s first appearance in the Los Angeles area in 10 years. Wilshire CC, meanwhile, hasn’t welcomed the pros since 2001. (Oakmont Country Club in Glendale also was in the running to stage next week’s event.)

Some of them were expected to participate in Wednesday’s pro-am. (Ferrell’s status was unknown after he was involved in an auto accident on Thursday night.)

Built above five capped oil wells on land originally leased from petroleum magnate George Allan Hancock, Wilshire CC will mark its 100th anniversary on Oct. 9, 2019. Only the L.A. Country Club in Westwood and the Annandale Golf Club in Pasadena in the area are older.

Hancock gave up four parcels of land on the course so that Beverly Boulevard could be constructed in 1925. A horseshoe-shaped tunnel that runs under the street to connect the two nines was then built, just big enough for one caddie carrying a golf bag on each shoulder to fit. Fortuitously, that space can now accommodate — barely — a modern-day golf cart.

Wilshire has a rich Hollywood history. Silent-era movie stars Vilma Banky (Rudolph Valentino’s co-star in the 1926 box-office smash The Son of the Sheik) and Lloyd were early members, and golf nut Bob Hope, from Lakeside Golf Club in Burbank, often snuck off the nearby Paramount lot to hit balls with pal Bing Crosby.

Doug Dickey, the club historian at Wilshire for more than four decades, noted that Rooney once applied for membership. “He had been kicked out of Lakeside after he destroyed a water fountain following a particularly frustrating round,” he said. “We turned him down.”

James Michener spent a week on the grounds to research the game for his 1976 book Sports in America.

The private Black Foxe Military Institute, where Hollywood folks would send their kids to school (Alan Hale Jr. and Larry Hagman went there), was located off the 13th fairway (it’s now the Hancock Park Terrace condominiums). Hughes had an estate overlooking the eighth green/ninth tee, and a home off the fairway at No. 11 stood in for the residence of Kim Basinger’s character in Curtis Hanson’s L.A. Confidential (1997).

Malbon Golf Is Making the Sport More Accessible in L.A.

For Martin Scorsese’s The Aviator (2004), producers took over Wilshire for a day to re-create a 1936 incident (which actually happened at Bel-Air Country Club, notes Dickey) in which Hughes landed his plane on a course to impress Katharine Hepburn, who was playing a round. Angry club members then chained the millionaire’s two-seater to a tree.

Fun fact: All of Wilshire’s colored tee markers are drill bits donated to the club by the Hughes Tool Company.

From the start, Wilshire was known for “discouraging Hollywood people from joining, because back then they were rich one day and poor the next,” says Dickey. Members also thought their “hangers-on” wouldn’t be a good fit, either. Hughes, as a producer and industrialist, was a (very wealthy) exception.

That philosophy — which was famously shared by the L.A. Country Club — began to ease in about 1980, when Smothers was allowed in, notes Dickey, who says that an equity membership at Wilshire now goes for about $90,000.

“It’s so crazy that we have not had a tournament in this market for so long,” Gulbis, who is repped by WME, says. “There’s no player that does not want to come here.” 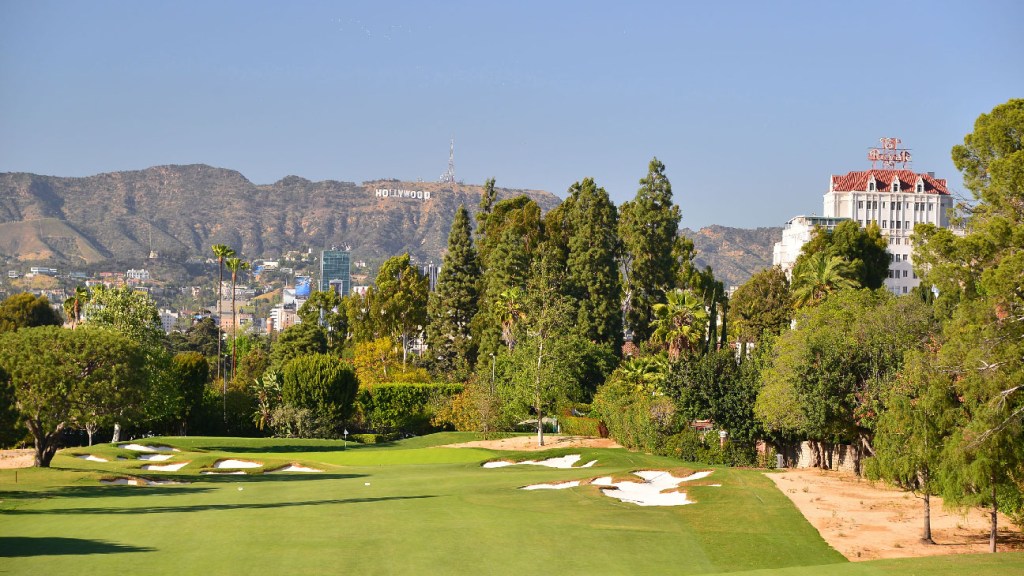