When I first met Eddie Bauer alpine guide Melissa Arnot Reid, I was just in awe of who she is as a human, athlete and mountaineer. Hearing her history with Mount Everest — she has summited six times and was the first American woman to do it without supplemental oxygen — was what put the bug in my brain: I’d always wanted to go to the Himalayas, but I’d never had any goal of climbing Everest. Obviously, I’m not a professional alpinist. It definitely scared me. But when Melissa told me about the more doable trek to South Base Camp (17,600 feet, vs. the summit’s 29,000), I thought, “That’s what I want to do as soon as I’m done with work.” I couldn’t get it out of my brain.

It’s a narrow window of time when you can trek to Mount Everest: February to May, and October to December. Melissa and I were there at the end of the season, when most teams were on their way home.

It was overwhelming to land somewhere in the developing world: Kathmandu, Nepal, with its traffic and chaos, felt reminiscent of the major cities in India that I’d visited. First, we talked to a widow of a Sherpa, who was able to open a restaurant to support her family with the help of Melissa’s nonprofit The Juniper Fund. (Melissa cofounded it in 2012 to provide funding and vocational training for the families of local Sherpas who had lost their lives trekking — when these breadwinners pass away, their wives, mothers and families are left without any way to make ends meet. In Namche, we visited some of these women, and it was a real highlight of the entire experience.)

The next day, we jumped on a 45-minute helicopter ride to Phakding, which is 8,000 feet above sea level in the Khumbu Valley. It was a completely different universe — nothing about the small, rural village resembled the city we were just in. It was mind-blowing, and I felt like, “Wow, OK. This is what I came for.” 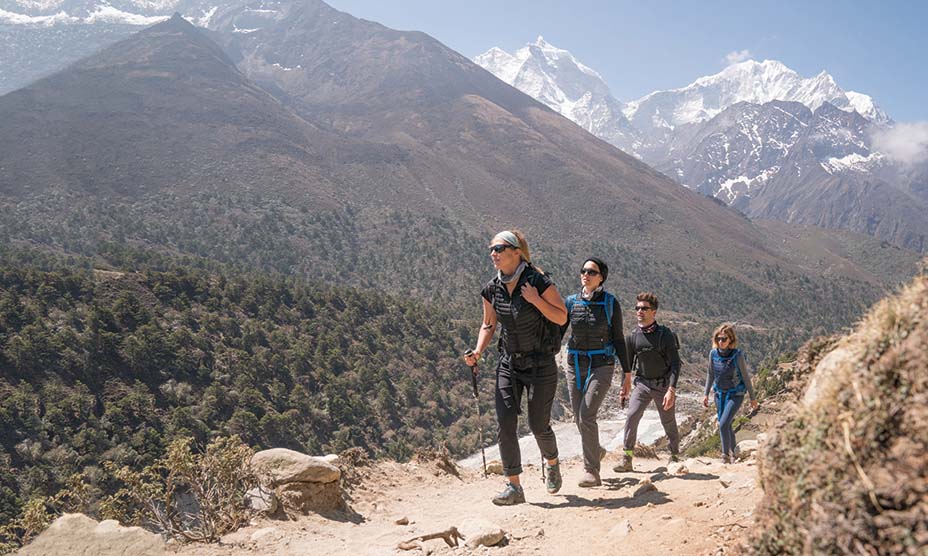 We landed at around 8 o’clock, and after a bit of tea and breakfast, we started. It was a really easy day. We didn’t gain any altitude as we walked about two hours to our first beautiful teahouse, in Monjo, where we had tea and popcorn. Teahouses are basic B&Bs or family homes that the Sherpa open to trekkers for accommodation, lunch and snacks. We stayed in eight along the way. Interacting with Sherpas like this and staying in their homes made me feel closer to the people and their world. I was learning every step of the way, getting an inside glimpse into the culture of the Sherpas and how much the mountains mean to them. That truly made the trip.

So much of our days revolved around food and drink, because it’s incredibly important to stay hydrated and get enough calories. Melissa gave us this crazy statistic that you burn two to four times your normal calories at altitude, so the average person burns 2,000 a day doing nothing, and that goes up to 4,000 to 8,000 calories while trekking. A lot of the Sherpas and porters drink what they call dud chiya, black tea with yak milk. It was delicious and I became obsessed with it. At every stop, we drank copious amounts. Meals — mostly Nepali dishes, including garlic soup — were home-cooked. At high elevations we ate a lot of fried rice, as it’s safe on the stomach.

Trekking soon became challenging, more because of the altitude than the walks themselves. Sometimes we’d gain 3,000 to 4,000 feet of elevation in a day, walking five or seven hours; some days, we walked just three. We were not running a marathon. Bistari, bistari means “slowly, slowly” in Sherpa, and it was our motto. We made sure that we weren’t maxing ourselves out. Melissa taught me this pressure-breathing technique, a quick inhale and a sharp exhale, like you’re blowing out the candles on a birthday cake. It opens your lungs and helps you absorb more oxygen, so as we gained altitude, we did it every five or six steps. At such extreme altitudes, sometimes you feel nauseated, tired, with a persistent low-grade headache. But you’d be surprised at how much a couple of pressure breaths in a row actually dissipates the headache. 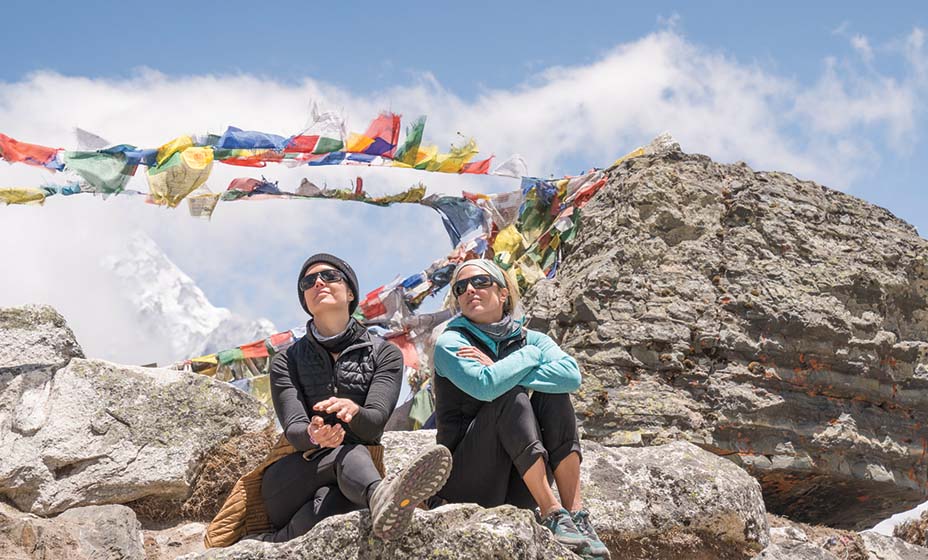 There was one night at 14,500? feet when I woke up choking and coughing. It’s something that can happen when sleeping at altitude — your body stops breathing momentarily, like sleep apnea. It wakes you up and is pretty scary, but it only happened that one night.

We felt a little tired the higher we went. As we walked, I tried to be present and appreciate everything. It was hard not to be overwhelmed. It’s really not about Everest; it’s about all the other incredible mountains and 26,000-foot peaks around you. I got to spend eight hours a day just staring at these mountains, and getting closer to them makes you feel insignificant in the most important way. It was every bit of therapy I needed.

There was one day toward the end of the trip when I just felt nestled in between all of them. I have tears in my eyes just remembering it. I never in my life thought I would see something that remarkable. It literally took my breath away.

On day seven, when we reached Base Camp, it was stunning. But every day had something like that. At every turn, there was a moment where you’re like, I can’t believe this exists in the world. Getting to Base Camp definitely felt momentous, but it was the entirety of the journey that was the reason why we were there. It really wasn’t about getting to this one point.

Melissa said that after big trips, there’s a bit of an emotional hangover. And after checking off the goal of Base Camp, I definitely felt a little empty, like there was a bit of a void. I understand that it’s going to take time for the experience to be reflected back into my life. But I still can’t believe we did it.