Over the past two years, Mark Duplass has spent nearly a dozen weekends helping people move in. Specifically, he’s been settling families who haven’t had roofs over their heads through Los Angeles-based nonprofit PATH (People Assisting the Homeless).

Homelessness in L.A. continues to significantly worsen; there are currently nearly 58,000 people in the county without a place to live, a spike of 23 percent from the year before, according to the official Greater Los Angeles Homeless Count. L.A. has the second-highest per-capita homeless population in the United States (New York City is No. 1), attributed in large part to relentlessly rising housing costs that outpace growth in wages. “People are falling out of their homes because the cost of renting is so high,” PATH CEO Joel John Roberts tells The Hollywood Reporter, citing an August 2017 Zillow analysis that found a 5 percent average rent increase in L.A. would put almost 2,000 more people on the streets (rents rose 4.2 percent in the past year).

One of PATH’s remedies in addressing the crisis is the Making It Home program, which focuses on placing individuals and families in permanent housing. Once situated, the organization continues to work with residents on any additional needs they have, including employment, mental health or substance abuse treatment.

Duplass, who’ll serve as the honorary chair of this year’s Making It Home campaign, which runs May 1 to June 30, spoke with THR about why he cares so passionately about the organization.

How did you first become engaged with PATH?

My introduction came about two years ago through my daughter, whose school is involved with a PATH program that provides lunches for people who are getting back on their feet but still need resources. She got really excited about the organization, and then I contacted them to get more information. I always feel a little odd about kind of throwing money over a wall. You wonder where it’s going and if it’s being effective, but when I found out about Making It Home, it seemed like a really good fit for me, my family, my friends and all of our co-workers.

What exactly does a Making It Home volunteer do?

Our company, Duplass Brothers, financially sponsors the move-in and then we have a lot of people who are just willing to donate their time and come out with us on a Saturday or Sunday and help build all the furniture and move it in. We’ve done about eight families so far. It’s a very personal experience when you’re helping move someone into their apartment. A lot of them are at a tricky time in their lives where sometimes they’ve been on the streets for 10 years, they don’t have a lot of stuff and are feeling very emotional about it. A lot of times they’ll be a single mother or father with two or three kids, and while we’re moving in their kids will play with my kids and my brother Jay’s kids. It’s very different from the (patronizing voice) “I’m here to help you because you are the less fortunate” type of experience. The kids are just playing in the yard together, and the most helpful part of it is it gives space for the parents to have that emotional moment while we move in. That’s a really sweet thing.

Why is it so important to make sure that homeless people have housing, rather than first addressing other needs they may have?

The PATH theory is that a person needs to be stabilized before they can start to work on some of those betterment processes of finding a job and mental stability. You’ve got to get yourself off the streets first. I got a really nice education from PATH about a much more gentle, empathetic and proactive way of approaching homelessness, which is, “Let’s get these people a place to live, and inside of that, let’s provide them the resources, the social work, the job placement to get them going from that stable place.” The apartments we move people into are located on a couple of different campuses, so when you go on different move-ins you can catch up with people you moved in earlier. One time we moved in a single mother and her son, and she was so thrilled and excited, but then there was the next phase of, “Am I going to be able to find a job? What is sustainability going to look like?” When we came the next time to move in a different family, the social workers at PATH had already found her a job and she was a completely different person.

What have you learned about how homelessness happens?

For a long time, it was viewed as, “Well, these people are most likely alcoholics or victims of their own behavior.” That’s been the prevailing attitude and certainly the attitude I grew up with in the ‘80s. But you know what? Eighty percent of the people I’ve moved in were kids who were born into that situation. Helping them is a no-brainer. The stories I’ve personally listened to of the people we’ve helped move in feel frighteningly close to home as something that could easily happen to the average person. It’s usually a case of a couple of pieces of bad luck, and then all of a sudden you can’t afford your rent, and then you’re in your car for a month, saving some money, and then somebody hits your car, and you don’t have the right insurance, and then you’re on the street. It’s this domino effect. When you’re in a major market like Los Angeles where the rents are so high, it’s frightening how quickly it can happen.

How has getting involved impacted you and your peers?

The film and television industry is a self-oriented place. We are into ourselves, we are into our art, we are into the way we look and how we are being perceived. To get outside of ourselves has been quite frankly a blessing for me and my friends, and it’s community building as well. For my good friend’s 40th birthday party, we did a big event at the PATH women’s shelter and upgraded and painted the entire outdoor play area. Rather than spend $5,000 to $10,000 on some big blowout, we all went and donated a bunch of money and some time. That was a really fun way to turn 40. I’ve had to be careful not to go broke doing this, because once you see how effective you can be, that every single cent is going directly to goods and services for people in need, it makes me think when I’m out to dinner, “Maybe I should have just stayed home and eaten cereal and given this money instead.” I’ve become a PATH ambassador to try and guilt some of my wealthier friends to come onboard. Everybody has their causes, and I respect that. This one is special to me because you can see the impact directly. In one day, we come in and build furniture, make some relationships and move someone into their new place. This is one way where you can feel like a little bite-sized chunk has actually worked. 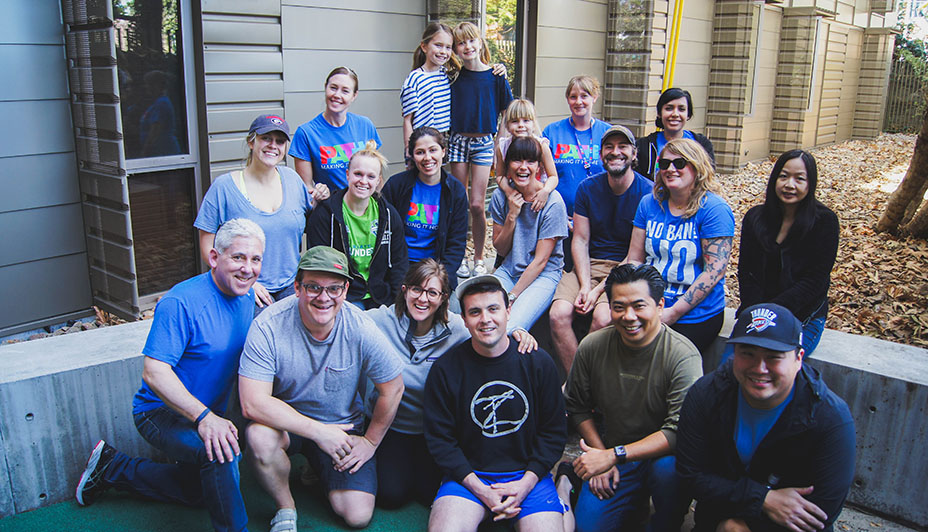