The franchise jewel inside the Anaheim park closed early to the general public in order to host an unprecedented event for the Make-A-Wish chapters of Greater Los Angeles, Orange County and Inland Empire. Dubbed Galaxy of Wishes, the fundraiser hosted supporters, wish families, corporate partners, special honorees and one Star Wars legend for a night of rides, food, drinks and live music all in the spirit of granting wishes for children battling critical illnesses.

The show also made some dreams come true for WME partner Richard Weitz, who was honored alongside his daughter and pandemic partner-in-philanthropy, Demi Weitz. The pair and their RWQuarantunes became a pandemic phenomenon after they turned a Zoom concert experiment during lockdown into a charity juggernaut, raising upward of $27.5 million for more than 50 nonprofit partners with the help of more than 500 performers, many of them household names.

Bert Kreischer's 'The Machine' to Hit Theaters Over Memorial Day

Star Wars icon Mark Hamill even made the trek to Disneyland Resort to present the award to the father and daughter. They’d previously met when Hamill appeared at one of the installments for Josh Groban and his Find Your Light Foundation as well as the USC Neighborhood Academic Initiative at L.A. Coliseum of which Mark and Marilou Hamill have been longtime supporters. “You gotta see these two together,” Hamill told the crowd. “I have a daughter and it’s a very special relationship between a father and daughter. I see so much of Chelsea and me in Richard and Demi. They have done amazing things for everyone. I can’t think of any two people in the world that deserve the Make-A-Wish Philanthropic Leadership Award than dynamic Richard and delightful Demi Weitz.”

During their acceptance speech, Richard said three of his favorite things in life are his daughter, Disneyland and Star Wars (“and not necessarily in that order”). “So when Jiminy Cricket sings ‘When You Wish Upon A Star,’ I can now say I know what it feels like to have a wish granted,” continued Weitz, whose fandom includes a life-size Stormtrooper in his WME office and a guest appearance from Darth Vader at his star-studded 50th birthday party. “Luke Skywalker giving us an award from Make-A-Wish at Stars Wars: Galaxy’s edge in Disneyland!”

The program delivered a reunion of sorts as the Weitz’s RWQuarantunes first partnered with the organization last year to host a Zoom fundraiser. Demi recalled that the event brought her close with Aniya, one of the Make-A-Wish recipients. “Her performance on that Zoom was so captivating. I’ve kept in touch with her throughout the year — she’s been updating me about her life and I am so proud of her for getting cast in a production of Dreamgirls. She’s definitely one to look out for and I’m honored to call her a role model and friend.”

That event last December raised more than $750,000 and Richard said the goal for Tuesday was to surpass $3 million. They got close as Galaxy of Wishes netted $2.5 million, bringing the total RWQuarantunes tally to north of a milestone $30 million. The Galaxy’s Edge outing was the latest in a string of appearances on behalf of RWQuarantunes, which started as a series headquartered in their Beverly Hills kitchen. During the pandemic, they ventured out to make high-profile appearances on behalf of institutions such as the Hollywood Bowl, Dodger Stadium, Ahmanson Theatre, Broadway’s New Amsterdam Theatre, the Grammy Museum, in cities ranging from L.A. to New York, and with the Beach Boys and John Stamos in San Diego.

“This all started out as a conversation with my dad and simply a new way to spend time together. Who knew writing a link on a piece of paper and flashing it on our first Zoom would translate to disrupting the philanthropic landscape,” recalled Demi. “As we hosted our Quarantunes, we formed a strong and intimate community, a key component of all of this. Quarantunes brought so much life into people’s homes during such bleak times.”

The series also carried her through from her 17th birthday to present day, as a freshman at Stanford University. “I am no longer that complacent and insecure teenager but a discerning advocate, working toward a viable future. I’ve embraced my role, my resources and access within my community to help organizations like Make-A-Wish,” Demi said of overcoming self-doubt and stepping into this new role in her life. “Every day I wake up with an innate curiosity to learn and lead. I have a new purpose.”

It also brought the Weitz family closer together. “Demi, doing this with you has been the greatest joy and accomplishment of my life,” said the power agent. “Being here is so special and I will never, ever forget this moment. I love you so much.”

There were others feeling the love Tuesday night, too. The Galaxy of Wishes event opened with RWQuarantunes regular DJ Cassidy, who amped up the crowd with an opening set that also featured Montell Jordan, Lisa Lisa and Morris Day. Entertainment Tonight star Kevin Frazier fronted the festivities as host, stepping in for Anthony Anderson who couldn’t make it due to his production schedule on the new Law & Order. After the honorees program, which saw another trophy doled out to the Los Angeles Chargers and team owners Dean and Susie Spanos as well as speeches, the band Fitz and the Tantrums closed out the show. 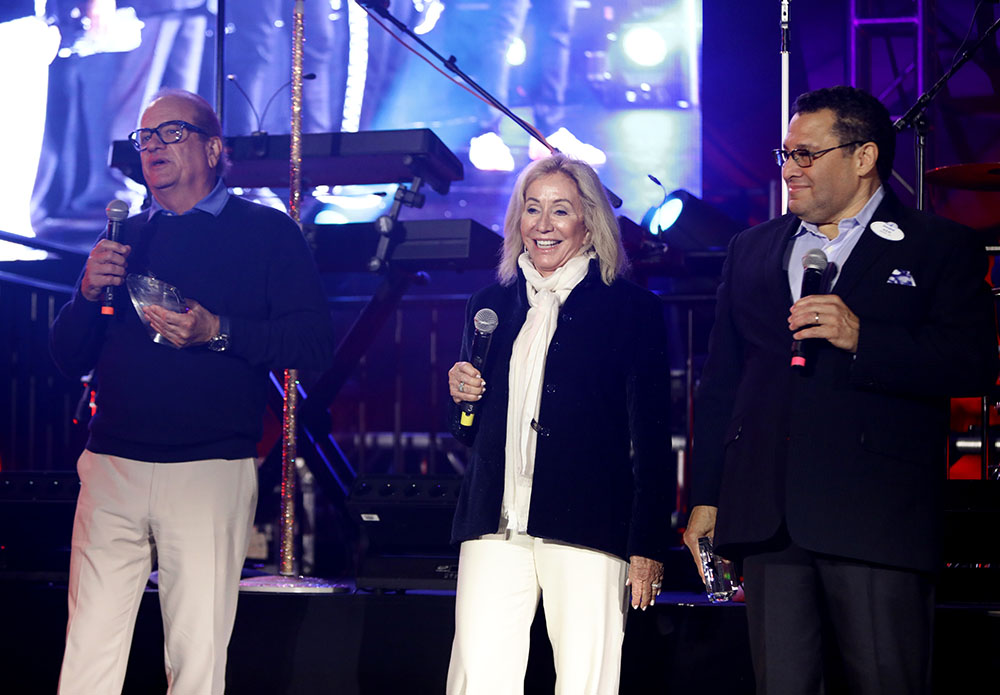 The Chargers’ Dean Spanos and Susie Spanos appear onstage alongside Disneyland Resorts president Ken Potrock, the latter of whom detailed that after granting the org’s first wish, Disney has been involved with making dreams come true for more than 145,000 children around the world. “We are proud that, historically, one of out of every two wishes granted in the United States has been a Disney wish,” Potrock said. “Tonight is incredibly special. It’s all about helping kids and giving hope to children and their families when they need it most. A wish brings joy and happiness to children with critical illnesses, helping them forget about hospitals, doctors and treatments so that they can just be a kid.”