A life spent injecting ink into flesh has taken Mark Mahoney, Hollywood’s most influential and respected tattoo artist, across the human experience. He began tattooing drunk Hell’s Angels beneath a swastika flag in a Massachusetts motorcycle club, then made his way for a time to Manhattan, where he set up shop at the bohemian Chelsea Hotel. (Sid Vicious was a client.) Now, with the fully mainstream acceptance of what was an outlaw aesthetic when he started in the business 40 years ago, he finds his booked-six-months-out appointment calendar filled with green-juice-toting “mothers and their daughters from Beverly Hills. I feel like I’m dreaming.”

Also stars: David Beckham is covered in Mahoney’s work, a fine-line style involving solely black-and-gray ink known as “single needle” that he has popularized — and that a coterie of younger practitioners has propagated on increasingly dewier millennial dermis. Other clients include Adele, Angelina Jolie, Rihanna, Jared Leto and Lana Del Rey, who cast him as her muse in two music videos.

In the past, he offered his services to rivals 2Pac and The Notorious B.I.G. — the latter just days before he was killed. (Quincy Jones has joked that musicians thank “God and Mark Mahoney” at the Grammys; awards season in general is particularly busy for him, with extra house calls and visits to the Four Seasons hotel on Doheny Drive.) Longtime patron and friend Mickey Rourke stopped calling to get together after he couldn’t be squeezed in before a boxing match in Russia. “People have told me he’s gettin‘ over it,” says Mahoney. “But it breaks my f—in’ heart.”

One of his longest-standing clients is Johnny Depp. This dates back decades to his journeyman era working in L.A.’s South Bay, where Mahoney, 59, once found himself tattooing Christ on a man when his “borderline retarded teenage girlfriend that he had turning tricks on PCH started blowing him. I’m like, ‘Come on! I’m doing Jesus over here!’ “

Depp tells The Hollywood Reporter that Mahoney “is amongst the finest tattoo artists to have ever plied the trade. I’ve known him since forever and I’ve got the ink to prove it. He’s my brother. We talk while he works. He once worked on my back for seven hours straight and that don’t feel too good. I couldn’t see a thing he was doing, but I trust him with everything I got.”

Many schedule sessions with Mahoney (he doesn’t share prices but larger custom pieces cost thousands, depending on the time required) simply for the excuse to temporarily hang out with him as much as to be permanently imprinted by him. Russell Brand confessed in a 2016 podcast conversation with Joe Rogan that “I became sort of besotted” with the “charming and enchanting” Mahoney, noting that he “kept getting tattooed just so I could suss him out.”

Spend an evening in the pink-walled rear room at his West Hollywood tattoo parlor, Shamrock Social Club, as THR did, and Mahoney’s charismatic raconteur reputation pans out. Beside portraits of the Virgin Mary and JFK, as he diligently inscribes a roaring bear onto the bicep of a 30-something Brazilian medical device salesman and banters with another frequent client, a goateed multimillionaire former telemarketing kingpin with a Viking tableau across his back, the artist holds forth in his inimitable brogue, low and worn. 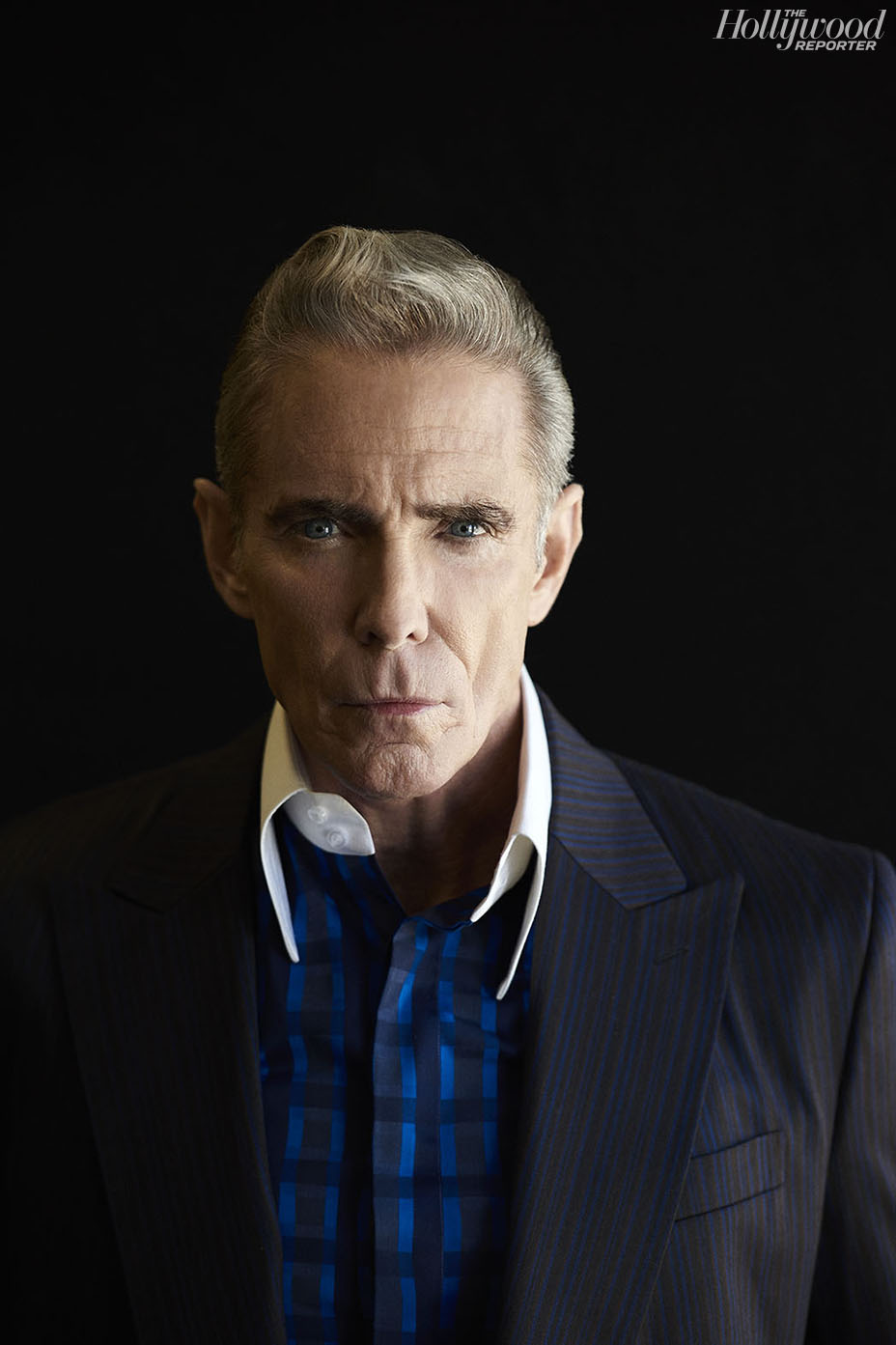 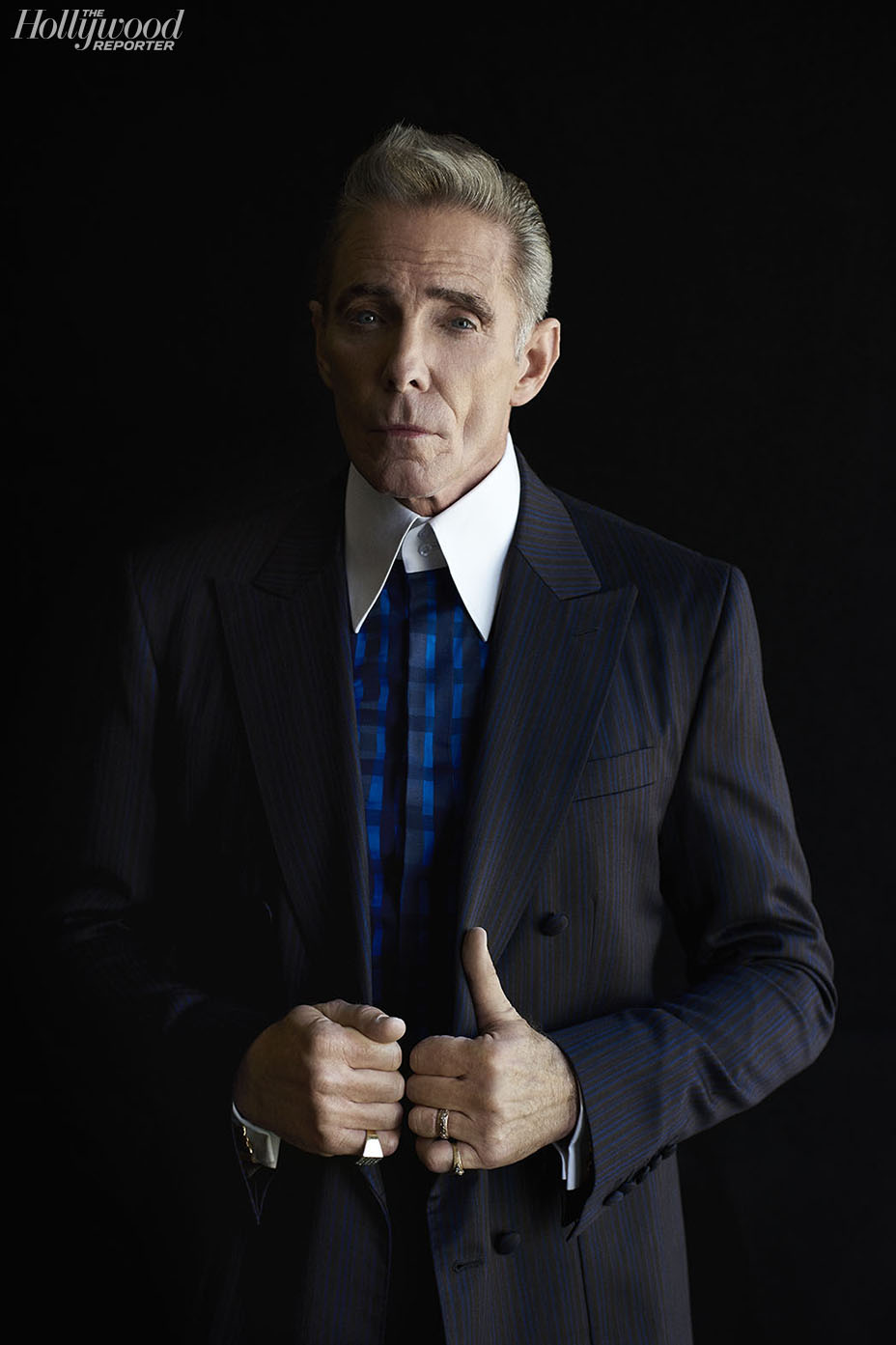 There’s the current state of his family’s place back in Boston (“It’s a shanty Irish Grey Gardens over there”).There’s his ruthless stint at a Valley rehab, appropriately called CRI-Help, when he quit heroin a quarter-century ago (“Hard-core, scary, toilet-seat-around-your-neck stuff”). There’s the moment he was asked to tattoo a fashion mannequin for the 2016 “Reigning Men” show at the L.A. County Museum of Art. (“As legit as I’ve ever been.”)

There also was the near-fiasco during 2012’s New York Fashion Week when he ended up levitating over a crowd at the Guggenheim’s rotunda in a gargantuan perfume bottle, tattooing an angel into the shorn back of Lady Gaga’s head. “I practically passed out while I was doing it because it was 200 degrees,” he says. “Turns out one of her assistants sat her ass on the one air-conditioning vent in there the whole damned time.”

Talk in the shop, situated along the ever-gentrifying Sunset Strip (“I’m trying not to think about it,” says Mahoney of the luxury development under construction outside his window), turns to the latest goings-on involving the telemarketing kingpin’s friend, a pimp. Then to former baseball player Darryl Strawberry’s allegedly enormous johnson and how he’d taped it to one leg so it wouldn’t get in his way at bat. Then to Mahoney’s 1984 Cadillac Biarritz coupe with pearl-white panels. Then to Kellyanne Conway’s quicksilver relationship with the truth. Then to the big-time three-card monte crew out of Cincinnati that used to visit Mahoney’s old shop in Long Beach. 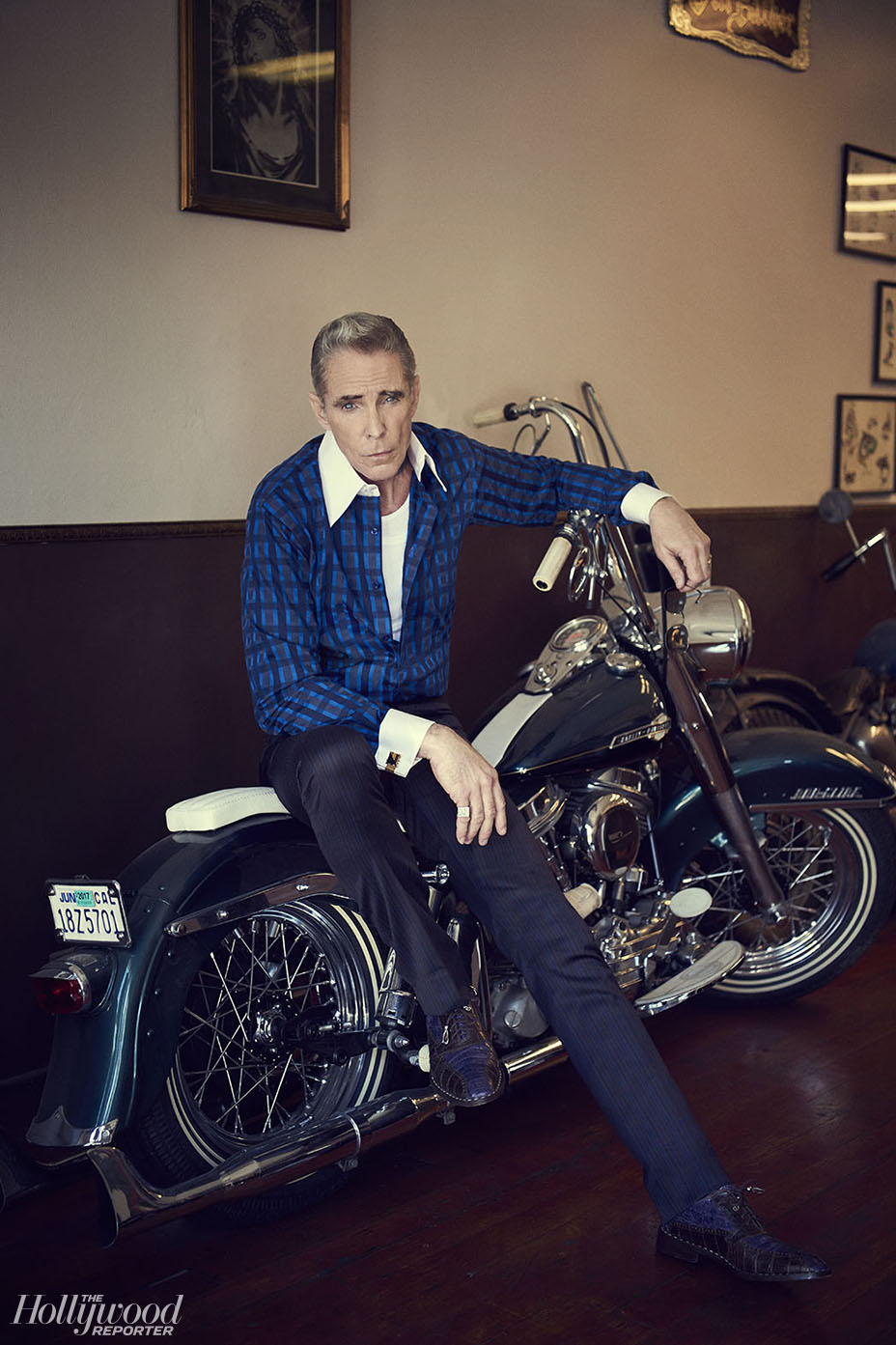 “When Mark tattoos,” says magician David Blaine, who once received a 24-hour tattoo of a Dali painting across his back from Mahoney, “you are not actually aware of the needle; instead you are entranced by the piercing of his eyes, which is always complemented by an incredible conversation.”

For all his creative and technical achievement, it’s evident the tattoos themselves are less important to Mahoney than the sense of intimacy he forges with people through the inking. Many practitioners of lower rank operate out of private studios, where they cultivate austere personas, but such isolationism defeats the point of the act itself and the culture it represents — at least to him. “I never wanted to be a painter,” he explains. “This is art for real people.” 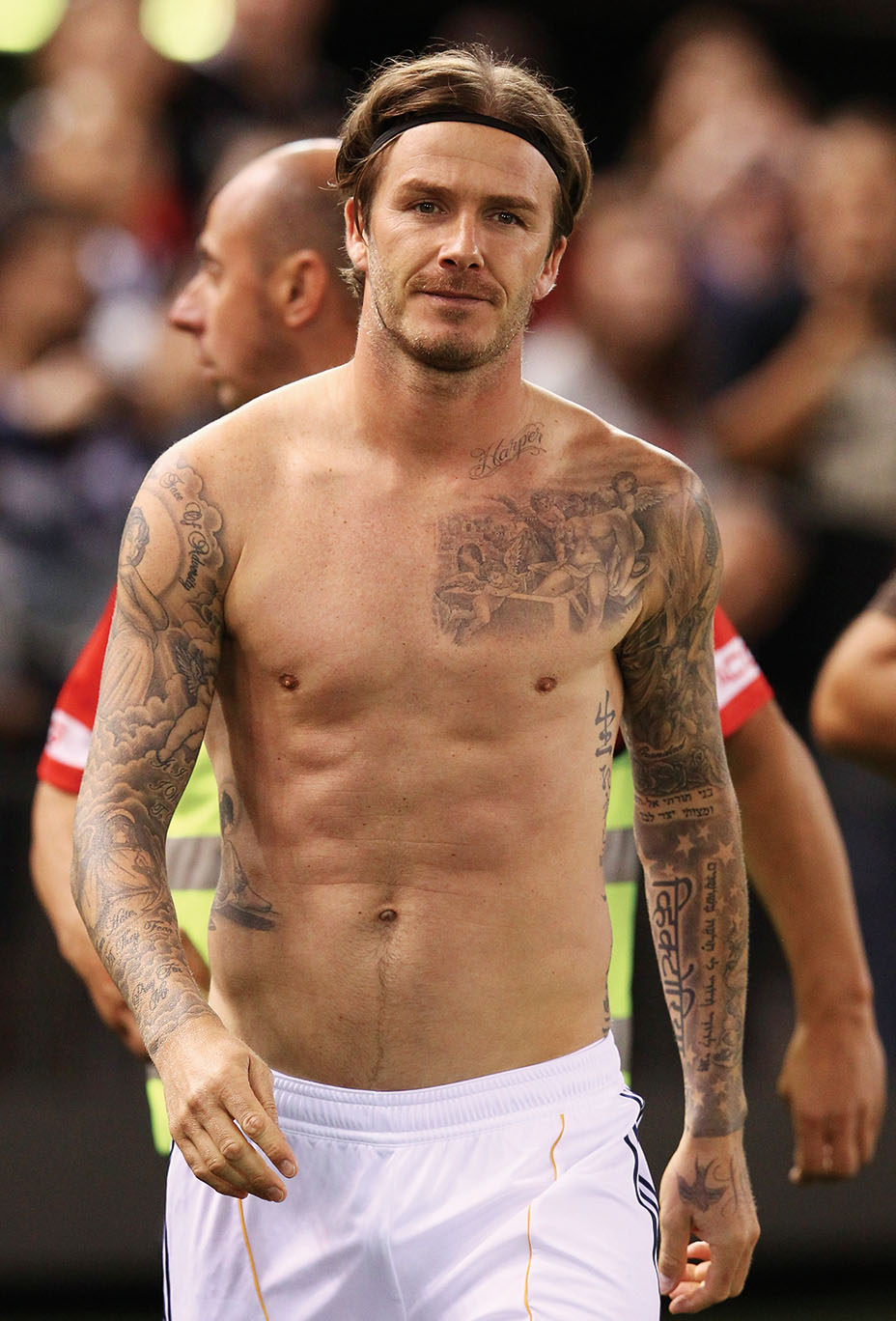 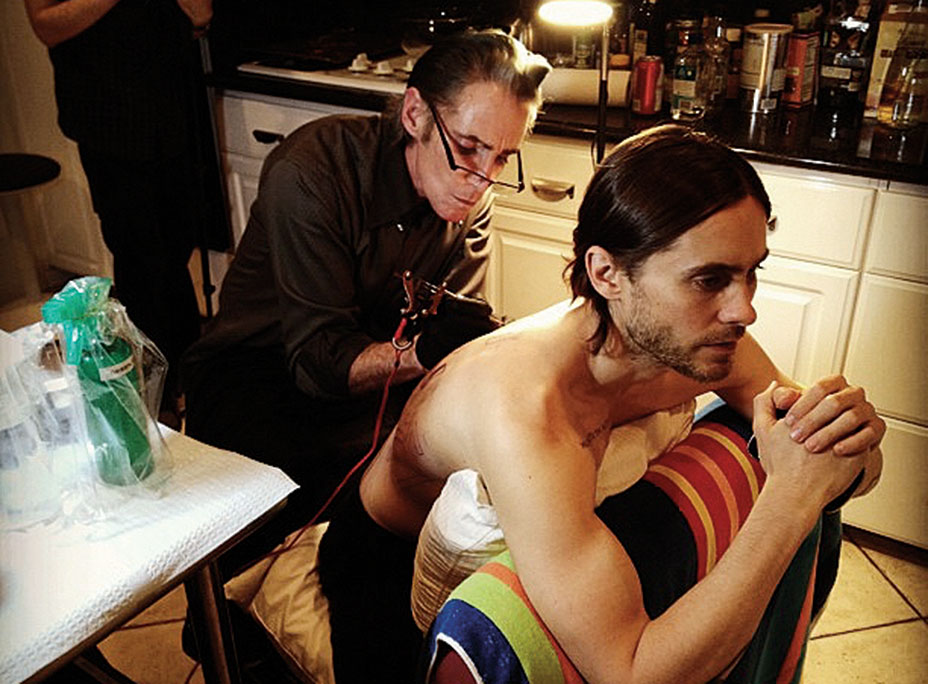 The strong-browed, pompadoured Mahoney’s sangfroid coupled with his bold vintage style — that of a ‘70s New York mobster who’s proudly invested in impeccable tailoring — has increasingly attracted Hollywood interest. He has acted in small parts in 2015’s Black Mass and David Lynch’s revival of Twin Peaks, which returns May 21. Meanwhile, the producers behind Jiro Dreams of Sushi have chosen him as the subject of their next process-oriented documentary on a master craftsman.

“It’s a combination of his strong look and that voice; he’s like a character out of Sam Peckinpah or Martin Scorsese,” says French director Guillaume Canet, who cast Mahoney alongside Marion Cotillard (Canet’s wife), in 2013’s Blood Ties. (After filming, Canet says, Mahoney inked “a really great piece of art” — a portrait of Cotillard — on his arm.) 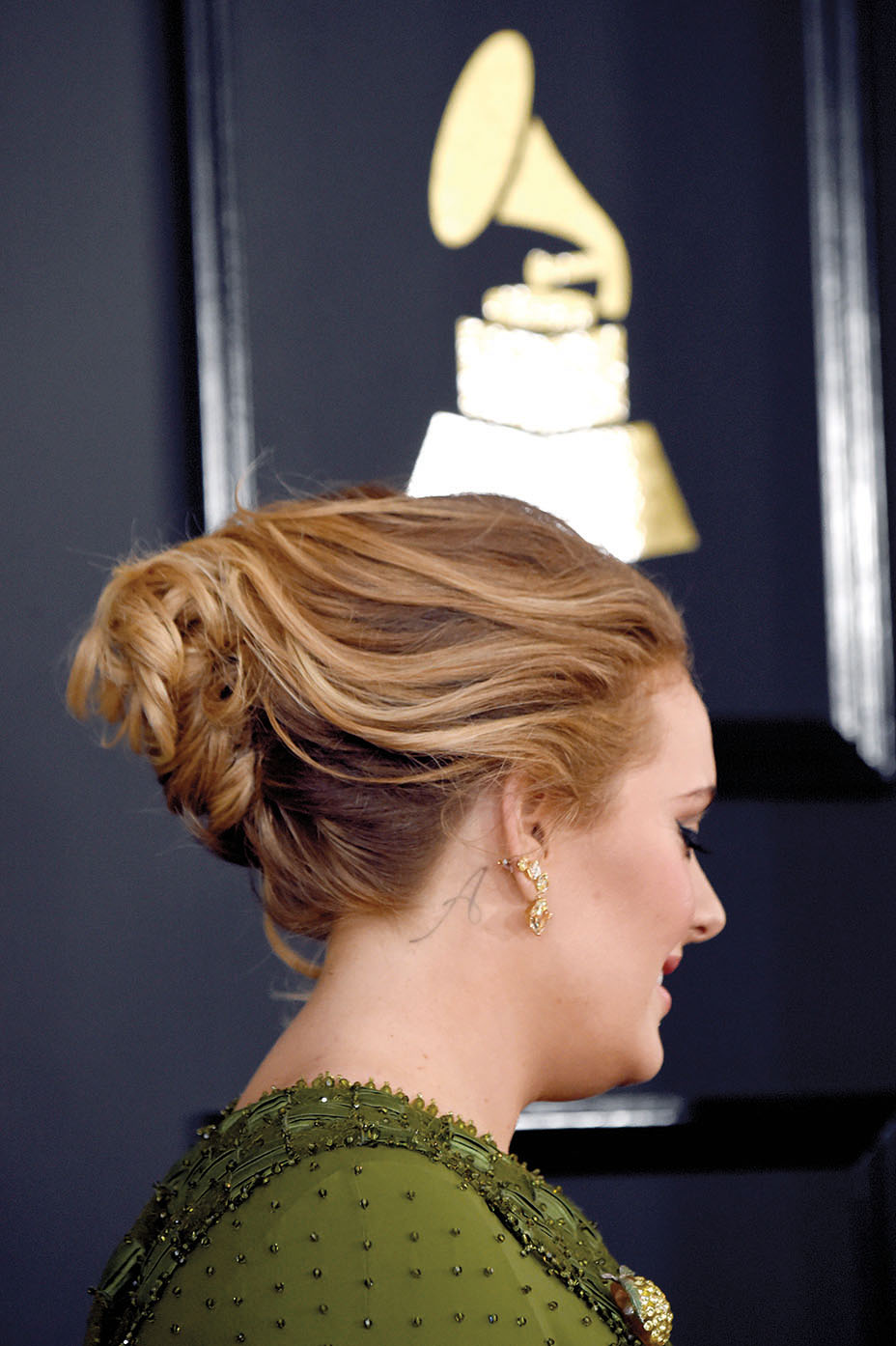 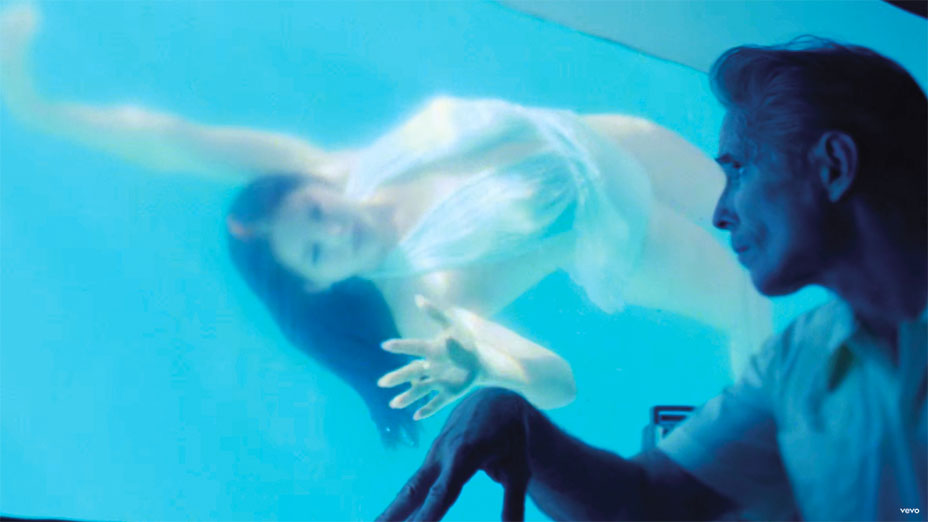 “He’s the best-dressed, with the coolest vibe,” says stylist Samantha McMillen (Elle Fanning, Chris Rock), whose Mahoney tattoos include a cherry blossom branch and a panther. “I used to pop in there just to see what he was wearing. Everything about him is part of that experience, head to toe: the way he combs his hair, the way he rolls his sleeves, the choice of his socks — it’s all so meticulous.”

That meticulousness is evidenced by the fine-line style, whose influences range from Japan to Russia but pri­marily is rooted in the creativity of California’s Latino gang members of the mid- to late 20th century, who worked on one another in prison. Shamrock, regarded for tough assignments (say a paragraph in light brown ink in two-point type), serves as a unique waystation for the West Coast aesthetic, a home for legends of the trade such as Freddy Negrete and Rick Walters as well as a launching pad for proteges such as Dr. Woo, whose own client list includes Cara Delevingne, Emilia Clarke, Miley Cyrus and Drake.

“I was a client of Mark’s for many years before I even apprenticed for him,” says Dr. Woo, himself famed in recent years for developing a repertoire of small fine-line geo­metric abstractions. “He championed this movement.”

Those like Dr. Woo and his East Coast next-generation fine-line counterparts JonBoy (Kendall Jenner, Justin Bieber) and Scott Campbell (Orlando Bloom, Penelope Cruz) have — like stylists, florists, caterers and other hustling upstarts at the intersection of craft and commerce — built their standing by making Instagram marketing central to their business. It’s not for Mahoney. “Tattoos are a private thing,” he says. “It’s your thing to put out there, not mine.”

A decidedly old-school figure steeped in counterculture values who is still quick to disdainfully refer to “squares,” he also has eschewed most of the brand-extension opportunities that have arisen as the once-marginal tattoo scene he helped to promote long ago went mainstream. Despite innumerable offers, there hasn’t been a reality TV show nor a fashion line. (“Is it something I’d watch? No. Is it something I would wear? No.”) 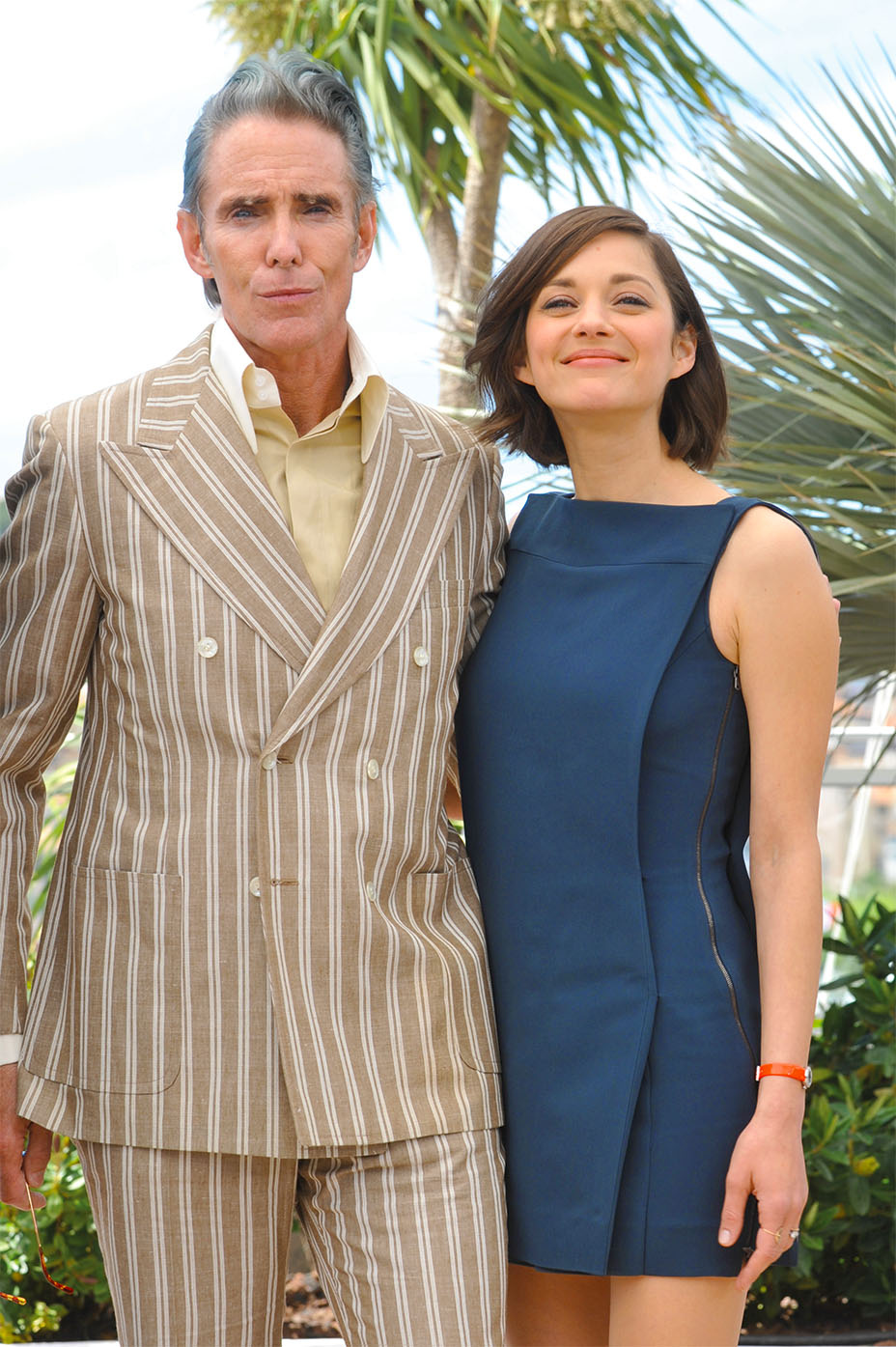 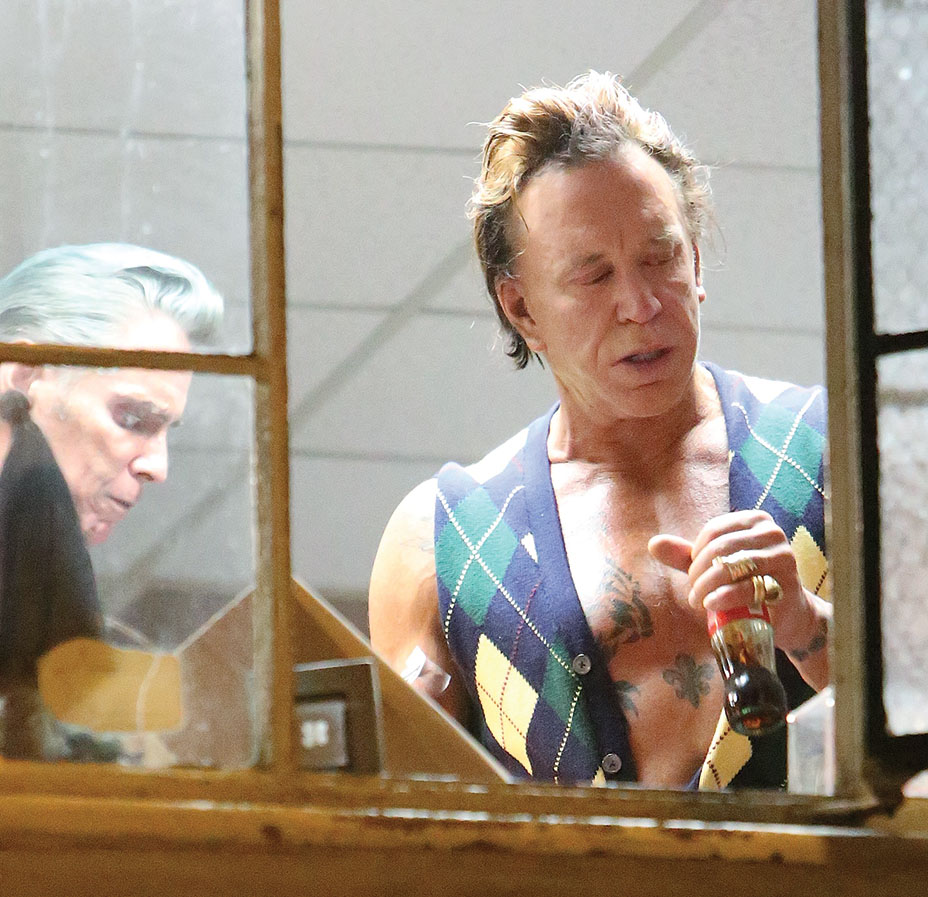 He considers Ed Hardy, for whom he once worked, a cautionary tale. The pioneering practitioner licensed his name to the late French retail merchandiser Christian Audigier; now, it’s shorthand for lame. (Those two ended up in a legal fight over the brand, whose 2009 sales exceeded $700 million, before reaching an undisclosed settlement.) “Ed really changed the game,” says Mahoney, who tattooed Audigier and notes he was nearly offered a similar deal. “He really brought tattooing to another level, quality-wise, and then when he had pretty much retired, that crook cheapened his reputation, and now nobody really knows.”

Mahoney is an anthropologist of tattoo trends, observing them wax and wane across the decades, from the cartoon characters of the ’70s to the tribal armbands of the ’90s to the Chinese and Japanese kanji lettering of the 2000s. Now he’s witnessing an epidemic of inspirational affirmations (e.g. “BREATHE”) as well as “these little outdoorsy scenes — pine trees, lakeside things, little f—in’ cabins,” he says. “It’s all these kids who spend all day on their computers who think they should be out in the woods but aren’t.”

Mahoney’s own kids grew up hanging around Shamrock, whose business end is run by his wife of 25 years, Nicole, who also operates the vintage clothing shop they recently opened together across town in Highland Park, not far from their home in quaint South Pasadena. (They met after he tattooed a cross on her chest; “he’s the Caravaggio of tattooers; his work has so much emotion,” she says.) 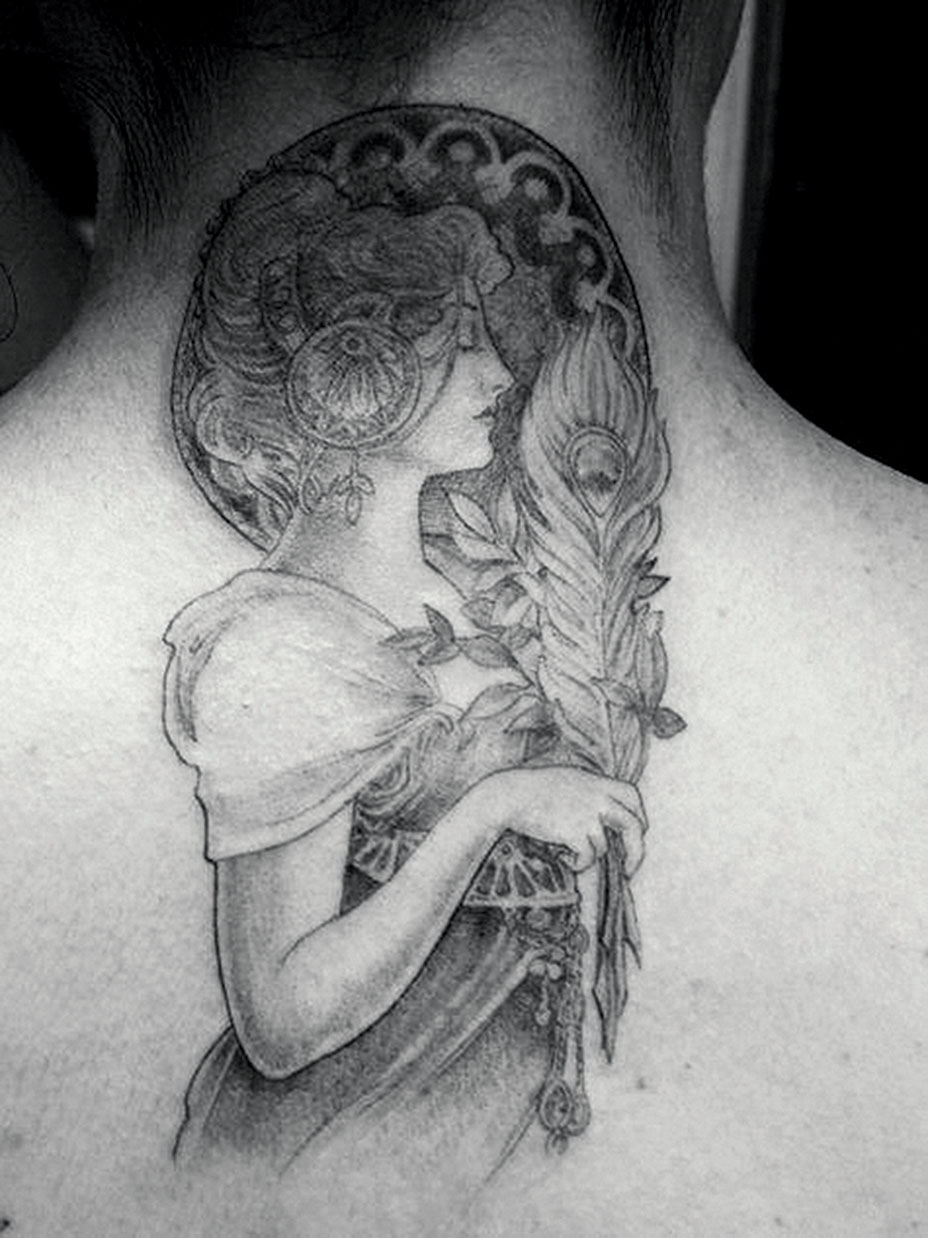 Amalia, 23, their elder of two daughters — Frenchie is 15 — recently began tattooing at Shamrock herself. “I begged to learn,” she says. “And it was always ‘next year,’ until I was finally old enough and he couldn’t hold me off any longer.” Mahoney has inked several of her own pieces, including a portrait of Elvis; he, in turn, offered up his skin as a practice field for her budding fine-line aesthetic. (He now has a Betty Boop on his leg.)

Like Amalia, Mahoney was a gifted illustrator as a child, and attracted to tattooing in substantial part for the sense of danger that then encircled its milieu. (“I was enthralled by the lowlife, you know what I mean?”) So the self-described “old goat” verges on melancholy when reflecting on how his daughter, who, until recently, elected to live on a block of Brooklyn’s Bedford-Stuyvesant neighborhood run by Bloods, is “obsessed with the same darkness and badness of it,” since she doesn’t have the opportunity to be healthily forged by the adolescent alienation that shaped him. “It’s gone now,” he says. 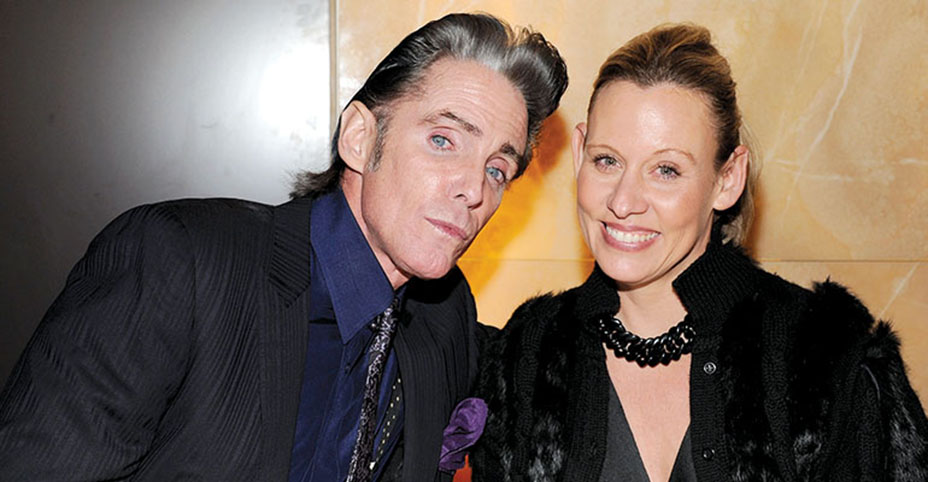 Mahoney observes that “people getting tattoos are often at a crossroads — a chapter is ending or a new one is beginning.” Despite his ostensive edginess, he exudes a disarmingly vulnerable earnestness, alert to the tension of such moments, their value. It’s readily apparent that the devout Catholic — he’s an usher at his church — treats his work, consecrating imagery on the body, with a tenderness akin to a sacrament. It’s no wonder his clients treat him like a priest, the experience of spending time with him like entering confessional. He shrugs when this is put to him: “All it is, is connecting.”

Explains Depp, “There’s a softness there, a certain sensitivity and honesty, which I feel is apparent in everything he does, both personally and professionally. There is no artifice there.” 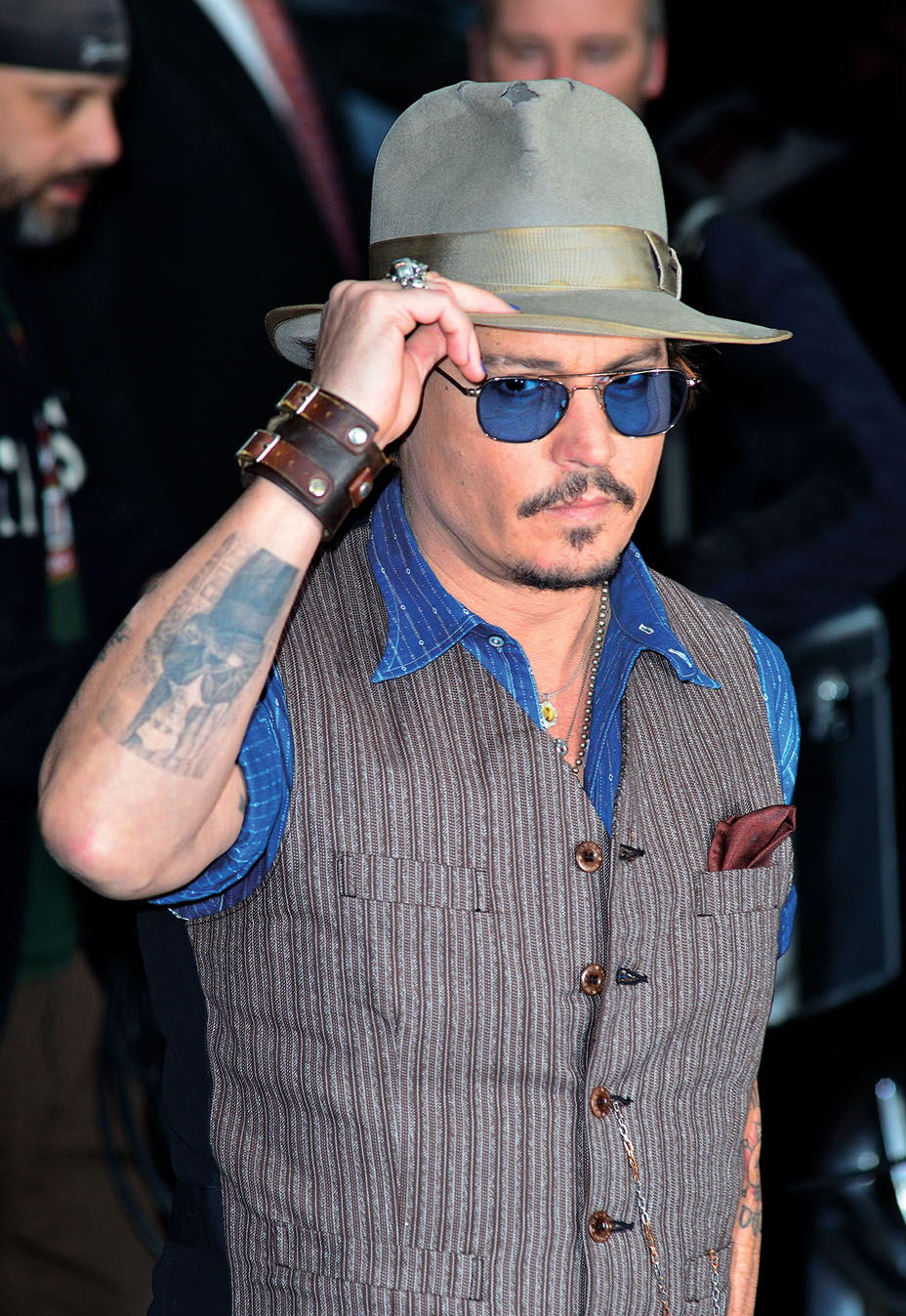