With its account of the misogynistic abuse of power, Measure for Measure is tailor made for the #MeToo era. You need only play it straight for Shakespeare’s inviolable knack for relevance to hit home. And for a time Josie Rourke does exactly that, offering a clean, lucid interpretation that elicits a frisson of frosty familiarity. It’s a shame that the Donmar’s gifted artistic director then proceeds to gild the lily.

Rourke presents a truncated version of the play twice over — first in 17th century mode, then in modern; on top of that, she has her stars Hayley Atwell and Jack Lowden alternate the roles of Isabella and Angelo, either side of the intermission — each actor, each gender getting a turn as victim and oppressor.

It’s a bold exercise, reminiscent in its gender shifting of one that Rourke oversaw as Donmar chief, namely Phyllida Lloyd’s all-female Shakespeare trilogy (Julius Caesar, Henry IV, The Tempest) in 2012-16. But if the intention here is to draw further nuance from the play’s dissection of sex and power — to consider our perception of those abusive power dynamics when the boot is on the other foot — the over-egged execution rather botches it.

That said, it’s certainly a thought-provoking evening, produced and acted with appealing verve. And it acts as a flavorsome appetizer for the intrigues of the director’s upcoming first film, Mary Queen of Scots, also featuring Lowden alongside Saoirse Ronan and Margot Robbie, which Focus Features will release Nov. 15 in the U.S., following its premiere on closing night of the AFI Fest in Los Angeles.

At the Donmar, the first, traditional take is more successful, not least for being fresh out of the traps. Designer Peter McKintosh has opted for elegant minimalism, the stage bare save for a bench and, above, a cruciform of golden, cylindrical lights. The russet-colored period costumes are gorgeous. As Angelo, Lowden is dapper in that sleek, over-fastidious way that just isn’t trustworthy. The actor also retains his Scottish burr, which fuels the chilly puritanism of the man as he blithely dispenses harsh justice to all and sundry.

Lowden is particularly good as Angelo uncomfortably chews (literally, his mouth moving in overtime) on his attraction to Isabella, asking of himself, “The tempter or the tempted, who sins most?” Opposite him, Atwell soars as Isabella revels in her articulate advocacy for her erroneously death-sentenced brother; though her sense of empowerment is short-lived. The rub of the play — as apposite now as it would have been in 1604 — comes when she attempts to fight back against Angelo’s proposition of sex for leniency. “Who will believe thee, Isabel?” he mocks. “My false o’erweighs your true.” 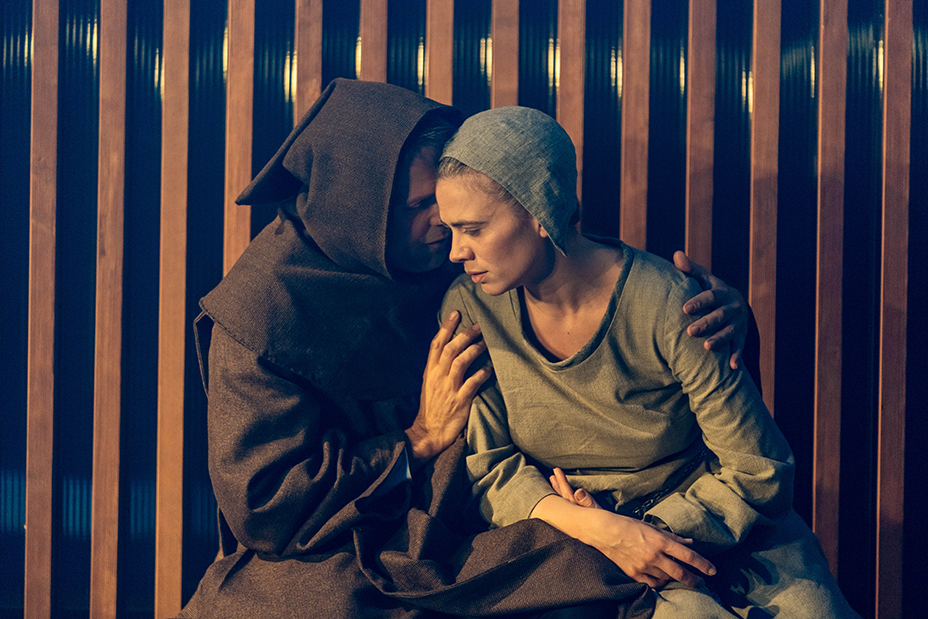 Of course, Angelo has been given his head by the Duke (Nicholas Burns), one inadequate governor offloading his responsibility to another. While the Duke’s disguises and maneuverings may give the play its uneasy classification as a comedy, his own self-serving behavior constantly tips it into darkness. And Rourke rightly declines the customary ambiguity of Isabella’s response to his offensive expectation of her hand — Atwell’s immense roar into Burns’ face expressing the frustration and rage of centuries.

With characters and subplots excised, the thrill of Shakespeare being cut to the chase also comes with a sense of being speed-dated, and of Burns doing way too much talking to move things along. Hence, when the exercise is repeated — the gender switch and modern milieu notwithstanding — it does come with a regrettable sense of déjà vu.

And how much is gained is debatable. Despite her immaculate dress and clipped authority, Atwell suggests a vulnerability in Isabella and an unease in her manipulation of Angelo (Lowden now in T-shirt and jeans, apparently less novice monk than man stepping out of rehab). Her shaming, as the tryst with the wrong man is shared on social media, has a scorn that, until Harvey Weinstein, would never be applied to a man. And when the now gay Duke tries to impose himself on Angelo, the latter merely brushes him away.

The problem here is that while the action onstage awkwardly makes its own point (such abuses really are the province of men, who, what’s more, would never allow themselves to be wronged), Rourke doesn’t fulfill the more valuable task of forcing the audience to question its own assumptions and prejudices. And that merely leaves the rebooted second half as an exercise in diminishing returns.

The strongest impression of the modern-dress section is made by the denizens of Mistress Overdone’s brothel, especially Jackie Clune’s hilariously Russian Pompey, as they brashly take selfies with their so-called betters, indicating their own awareness of the societal hypocrisies at play.